The Status of Budget and Pension Legislation

With just a few days remaining in the 2018 General Assembly session, lawmakers still have two huge tasks before them: complete a new state budget and enact pension reform.

The commonwealth’s constitution requires them to pass the former. The prospects for the latter don’t look so good.

A Debate that “Got off the Rails”
So far the three versions of pension reform proposed by lawmakers have met fierce resistance from current and retired public employees and teachers. Gov. Matt Bevin released his plan last October, the Senate introduced their proposed legislation on Feb. 20, and then added a committee substitute on Feb. 28.

Senate Bill 1 would save the state $3.2 billion over 20 years, according to Sen. Joe Bowen, sponsor of the measure and chair of the Senate State and Local Government Committee. Much of that savings would have come from a cut to cost-of-living adjustments for retired teachers from 1.5 percent to 1 percent annually. Educator groups argued that that went against the inviolable contract which guarantees retirees certain benefits.

The legislation passed Bowen’s committee but then failed to reach a floor vote in the full Senate after teachers turned out en masse to oppose the measure.

“We just feel like it’s been a very one-sided conversation,” says the KEA’s Stephanie Winkler. “Chairman Bowen has had meetings with us, as did the governor, but they were more meetings about here’s what we’re going to do, not ‘let’s listen and implement other ideas.’”

Republican leaders say they have listened to teacher concerns and changed the legislation. They also point out that the Bevin administration has allocated record levels of funding for the pension systems that are mired in more than $40 billion in unfunded liabilities.

Jordan Harris of the Pegasus Institute says he thinks the Senate’s reforms are reasonable and thoughtful, and respect Kentucky’s teachers. He contends his side has conceded more in the debate now that new teacher hires would be placed into a hybrid cash balance retirement plan instead of the 401(k)-type defined-contribution plan that Bevin proposed and that business groups prefer.

“So it’s strange then to see what I do classify as rhetoric coming from the other side,” says Harris, “what I do classify as misinformation that has been put out about the bill, and a general ignorance that exists that I think has been done intentionally to gin up opposition to the bill.”

Winkler says the KEA has not used rhetoric or misinformation. She says public workers are angry over the disrespect they feel coming from Frankfort Republicans and they fear new cuts to their retirement benefits. For example, the proposed COLA reduction alone could cost the average retired teacher $65,000 in income, according to the Kentucky Center for Economic Policy’s Jason Bailey. He says teachers are not ignorant about the impacts of the proposed legislation.

“That is the kind of language that upsets people so much,” says Bailey. “[Teachers] are extremely well informed because it’s their lives that are on the line, it’s their futures and their retirement.”

The fate of SB 1 is uncertain. It’s been sent back to committee for further work and Senate President Robert Stivers (R-Manchester) told reporters last week that the measure has “a very limited and difficult path forward.”

Dave Adkisson of the Kentucky Chamber of Commerce, which has called for pension reform but stopped short of endorsing any of the specific proposals, says it may be time for a different approach.

“This thing got off the rails,” Adkisson says. “It might be time to back up, take a breath, and work on this. Frankly I think that if some of us had been locked in the room some months ago, and said don’t come out until you’ve got something, I think we could’ve made some agreements.”

Structural Changes or More Funding?
Adkisson says something like that happened in 2015 when then-Gov. Steve Beshear convened a task force of state officials, teacher groups, legislators, and others to explore fixes to the Kentucky Teachers’ Retirement System. Adkisson was a member of that group. He says they nearly reached consensus on a plan to restructure KTRS that he contends would have resolved many of the problems that system faces today.

While he doesn’t hold much hope for the current proposal, Adkisson says he does believe cooler heads could develop a new common-sense plan that lawmakers could pass.

“I think there are structural changes, some benefit modifications, that could be modest, mostly toward new teachers so that you don’t take away the promises that we made to current workers or retirees,” says Adkisson.

But Bailey says “structural changes” is simply a euphemism for taking more from employees and retirees.

For 15 of the last 22 years, the state failed to pay the full actuarially required contribution (ARC) for the Kentucky Retirement Systems, says Bailey, and for KTRS, it paid less than the ARC for 9 years. That’s why he applauds the additional funding that Bevin and lawmakers have appropriated for the pension systems. Bailey contends that if the state continues to pay at least the full ARC to the various public pensions systems, the plans will return to a healthy funding level in 15 years, and be fully funded within 26 years.

Harris counters that simply paying the ARC without making structural changes will not make the pensions plans solvent over the long term. He cites a study conducted last year by consultants hired by the Bevin administration that showed a lack of proper funding resulted in only 15 percent of the unfunded pensions liabilities. Harris also points to the County Employees Retirement System, which he says lost billions over the past 15 years despite receiving full ARC payments every year.

“The idea that simply putting more money into the system, simply keeping the status quo will fix this problem is a total farce,” says Harris. “It will continue to lead us down this path where we have more money coming out of the system than money going in.”

He admits the recession did hurt the state’s pension systems, but he says an even bigger issue is the fact that lawmakers have approved new benefits for retirees over the years that weren’t adequately funded.

Winkler says teachers and public workers have made enough concessions already, and the current benefits are “fine.” She warns that if SB 1 is revived and passes the legislature, the KEA will take it to court.

“I think that’s a waste of taxpayers dollars and time and money that could be going to kids and schools in Kentucky,” Winkler says. “We need to find the revenue to fund all public services beyond education.”

The Budget and Taxes
But plans to address state revenues through tax reform haven’t jelled yet. Gov. Bevin originally proposed tackling pension reform and tax reform in one legislative session, but House and Senate Republicans opted to address the pension problem first.

Bevin and GOP leaders propose putting $3.3 billion towards the pension plans in the new state budget, which would constitute about 15 percent of all total spending. To offset that, Bevin suggested a 6.25 percent across-the-board cut to most state agencies, and an end to funding for 70 programs ranging from poison control to weather monitoring to the arts.

The House budget plan reversed some of those cuts, which they would pay for by raising the retail cigarette tax 50 cents and by implementing a 25-cent tax on prescription opioids that would be paid by pharmaceutical distributors.

“It’s essential that a budget pass with more revenue, and I applaud the House for taking a step toward doing that,” Bailey says. “It’s in my view too modest and won’t be sustainable in the long term in terms of revenue sources, but they have opened the door a crack to look towards something that we have needed to do for a long time, which is to… generate some new revenue.”

The Kentucky Chamber of Commerce and health advocacy groups have advocated for increasing the cigarette tax by $1. Adkisson says from the chamber’s perspective that’s more for the health benefits from decreased smoking rather than the revenue it would generate. He says the House plan to increase the tax by half that amount is still courageous.

“We prefer that there be a thoughtful conversation about comprehensive tax reform,” Adkisson says. “We recognize that there will have to be some new revenue – and, by the way, the Chamber has shifted its position from six or eight years ago when we said we’re for tax reform but it has to be revenue neutral.”

But the tax question is likely moot for now. The Senate version of the state budget unveiled Tuesday morning keeps many of Bevin’s cuts and does not propose any new taxes. Lawmakers will have to work out the differences between the House and Senate spending plans in conference committee before the General Assembly is scheduled to end on April 13. 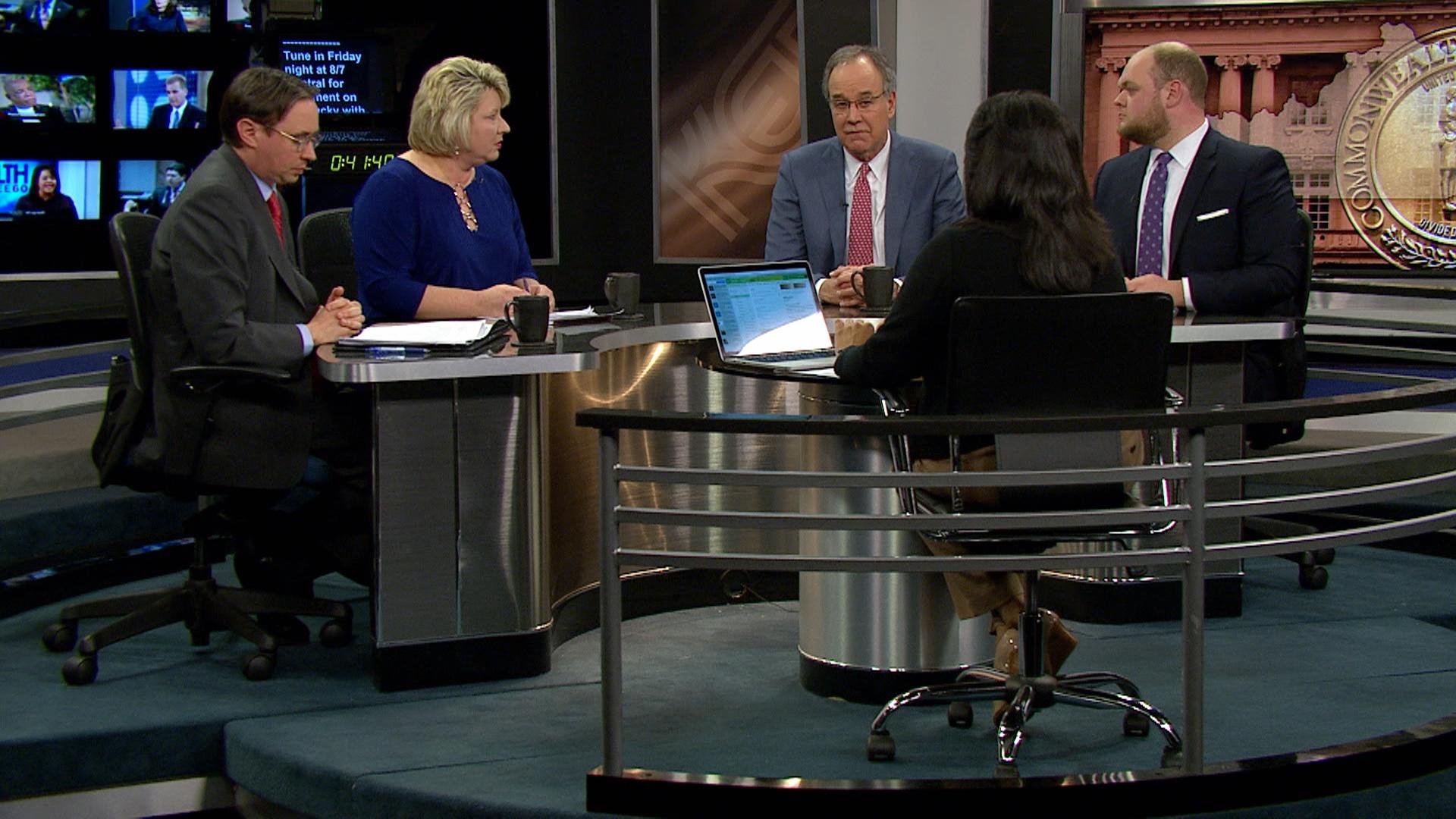