The Future of Kentucky’s Medicaid Expansion

This month, Gov. Matt Bevin’s administration is finalizing a waiver request to federal regulators that, if approved, would allow the state to make significant changes to its Medicaid program. The governor says the plan, which includes implementing premium payments and work requirements, is vital to making Medicaid more financially sustainable and improving health outcomes for the 1.4 million Kentuckians in the program. Critics argue the proposal erects unnecessary barriers to medical coverage for some of the state’s most vulnerable citizens.

Why Change the Program?
Under provisions of the Affordable Care Act, former Gov. Steve Beshear expanded the state’s Medicaid program to cover Kentuckians making up to 138 percent of the federal poverty level (or about $16,400 a year). Initial projections estimated that about 150,000 people would sign up for coverage under the expansion, but more than 435,000 individuals actually enrolled. That has pushed the state’s total Medicaid population (those in the traditional program and those covered under the expansion) to 1.4 million people.

Kentucky, like other states that expanded Medicaid, will have to pay an increasing percentage of the coverage costs starting in 2017. The commonwealth’s tab is estimated to be about $1.2 billion over the next five years. The Beshear administration, citing a Deloitte Consulting study it commissioned, said the expansion would pay for itself by creating new jobs and tax revenues, and ultimately lower health care costs.

Rep. Jenkins, who is chair of the House Budget Review Subcommittee on Human Resources, argues that the expansion has had a positive economic impact. She says at least 10,000 new health care jobs have already been created and more are coming. Hospitals and other providers have seen increased revenues and lower uncompensated care costs, according to Jenkins. And she says more people are seeking preventive care and wellness services.

Jim Waters says Medicaid was created as a safety net for low-income and disabled people and that the program has already grown too large to properly provide care for those who truly need it. He contends the existing, traditional Medicaid program has not generated the health outcomes and fiscal benefits that its proponents have promised.

Given massive public pension debts and other funding priorities, the Bevin administration argues the state can’t also afford the costs of Medicaid as it currently exists. That’s why the new governor has proposed an overhaul.

Moving from Copays to Premiums
The administration plan, called Kentucky HEALTH, would require most Medicaid members to pay monthly premiums ranging from $1 to $15 based on their income levels. Rep. Wuchner, who is vice chair of the House Health and Welfare Committee, says some enrollees and health advocates prefer premiums to copays for services.

“It’s hard to plan for copays, especially when you’re on a limited income,” Wuchner says. “But if you know that it’s going to cost you $12 a month or $4 a month for coverage, that’s plan-able, that’s do-able, that’s your skin in the game.”

Plus, modest monthly premiums may be cheaper than facing a single large copayment bill for an emergency room visit, adds Waters.

The state will have to create an infrastructure to process the premium payments, and Cara Stewart says that will be more expensive.

“The cost to collect those premiums is a terrible deal,” says Stewart. “I don’t see how any fiscal conservative can support it because it costs more per member per month to create the administration and the bureaucracy necessary to collect that.”

Opponents of Bevin’s plan also criticize a provision that will terminate coverage for six months if enrollees in the Medicaid expansion fail to pay their premiums. Benefits can be restored sooner if the individual completes a financial or health literacy course and pays any back premiums he or she owes, plus the next month’s premium.

Provision to Improve Employment Opportunities
Kentucky HEALTH will also require all able-bodied working age adult enrollees with no dependents to participate in employment-related or community service activities. This can include an actual job or job training and looking for work as well as volunteering for a school, church, or civic group. The requirement starts at five hours a week and increases to 20 hours a week after one year.

The idea is to help low-income Kentuckians develop useful skills that can make them more employable or help them get better-paying jobs that come with insurance. The hope is that individuals will move off of the Medicaid rolls and into private or employer-based insurance plans. Those who perform additional work and volunteer activities can earn credits into a “My Rewards” account that will allow Medicaid enrollees to purchase additional health care services not covered by the program.

The idea of attaching work requirements to public benefits is not new. Wuchner notes that Kentucky has required those enrolled in the Supplemental Nutrition Assistance Program (also known as food stamps) to work.

Critics of the requirement contend that most Medicaid enrollees already have full- or part-time work. Stewart says Medicaid was created to provide access to health care, not be a workforce development program. Jenkins fears that the combination of mandated work requirements and premium payments may be too onerous for some people.

“These people are making very, very low income, and to kick them off of health care or to put their health care in peril is not going to make them more employable,” Jenkins says. “I would rather see us use more carrots without the sticks.”

Waters supports the work provisions proposed in the Bevin plan. He argues that the bigger public policy goal should be moving more people into better jobs, higher incomes, and the commercial insurance market, not seeing how many people the state can enroll in Medicaid.

“I don’t see where keeping the status quo is going to help recipients improve their situation,” Waters says. “I think it’s a shame that we would place barriers in the way of our fellow brother and sister Kentuckians to bettering their own lives.”

Prospects for Kentucky HEALTH
Waters acknowledges that Gov. Bevin’s plan isn’t perfect. For example, he wonders what will happen when an individual who has been dis-enrolled from Medicaid for nonpayment of premiums seeks emergency care.

Stewart claims that most of the cost savings outlined in the governor’s proposal will come from removing low-income and disabled individuals in the traditional Medicaid program.

Waters counters that those people won’t lose coverage but will transition to private or work-based insurance as they get jobs and earn more income.

Rep. Jenkins says there are some good aspects to the governor’s proposal. She applauds efforts to address profits made by managed care organizations that provide medical services to Medicaid patients, and provisions to expand in-patient treatment options for those with a substance abuse disorder.

The Bevin administration hoped to file its waiver application with the federal Centers for Medicare and Medicaid Services (CMS) by August 1. Wuchner says that’s been delayed by a few days to allow state officials more time to integrate public feedback they’ve received into the application. She believes Bevin’s plan will be approved even with the premiums and work incentives.

“No one is wanting to see anyone kicked off [Medicaid], but we want to see people be able to utilize the programs, improve their health, have enhanced health outcomes, build a relationship with their primary provider or their medical home, and hopefully, as they have better health, they’re able to be more employable,” Wuchner says.

Jenkins isn’t so optimistic about the plan or its prospects.

“I think we can always make something better, but we certainly don’t want to go backwards, and I’m afraid that with this proposed wavier we could go backwards,” Jenkins says. “Some of us are very, very concerned about the premiums and some of the work requirements because we know that the federal government has said that that’s a non-starter for them.”

If CMS does reject the Bevin administration’s proposal, Jenkins says she hopes the governor will negotiate in good faith with federal officials to find an acceptable solution. When he announced his waiver plan in June, Bevin said he would repeal Kentucky’s Medicaid expansion if CMS denies the state’s application. 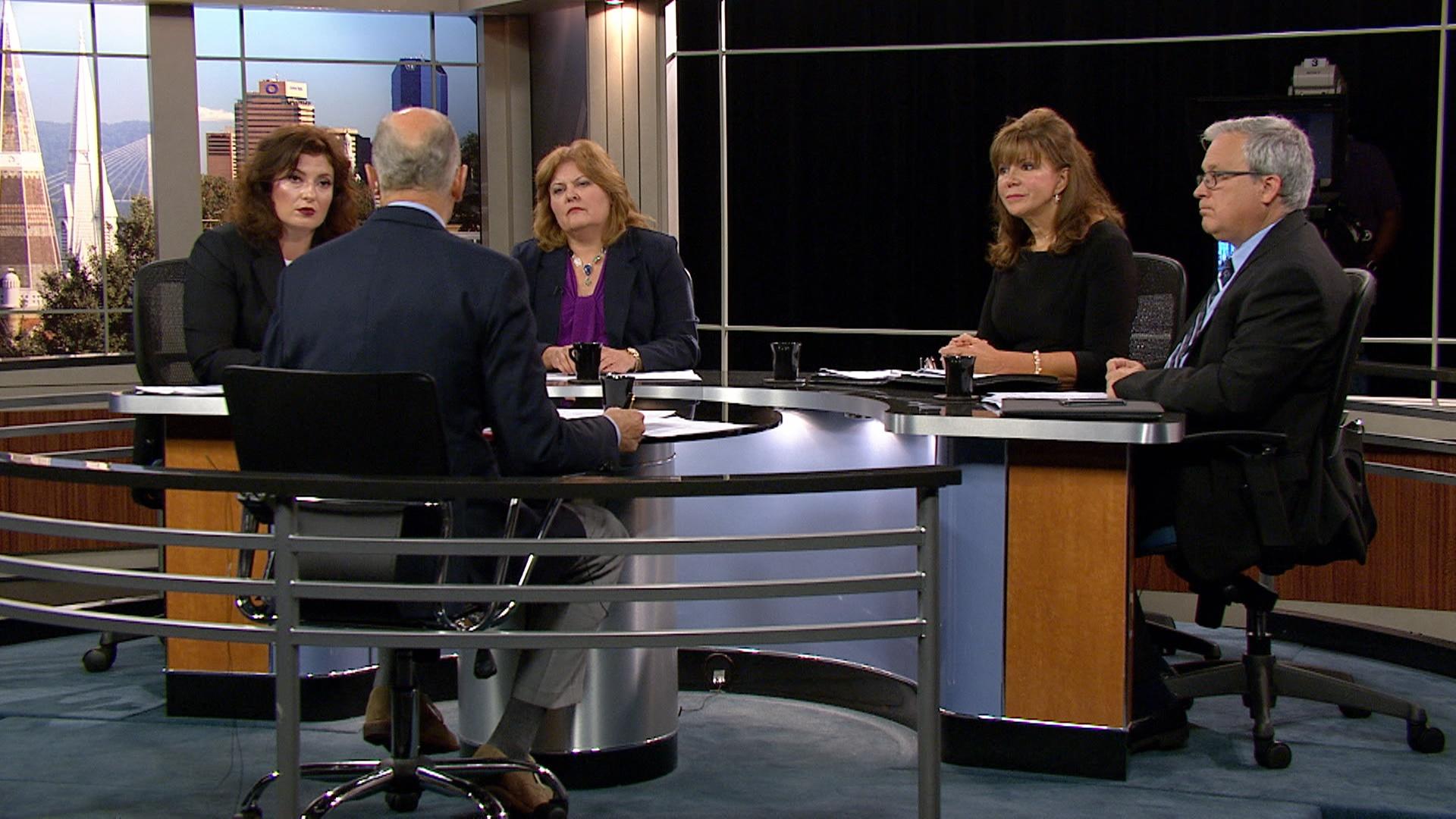