Reviving a Signature Industry During a Health Crisis

When your business model is built on the free flow of visitors to destinations across the commonwealth, the last thing you want is a world on virtual lockdown to avoid spreading a highly contagious virus.

But that’s what Kentucky’s tourism industry faces in the age of COVID-19 as millions of individuals and businesses have scaled back or cancelled travel plans since the pandemic hit in March.

“It was as though a figurative tornado came through and hit this industry,” says Hank Phillips, President and CEO, Kentucky Travel Industry Association. “We’re accustomed to talking about all the great things, all the great experiences, and to find ourselves talking about devastation in the travel and tourism industry in Kentucky, it is surreal as it gets.”

More than 94,000 Kentuckians are employed in the state’s tourism industry, from state park and fish and wildlife employees, to hotel, restaurant, and convention workers, to those who operate private attractions and cultural destinations. Kentucky Tourism, Arts, and Heritage Cabinet Secretary Mike Berry says the industry generates $11 billion in annual revenues for the commonwealth.

“Tourism is an incredibly important part of the Kentucky economy,” he says.

When the COVID-19 upended life in mid-March, Gov. Andy Beshear closed non-essential businesses, including most state park dining and lodging services. Stay-at-home orders in the commonwealth and many other states also meant the cancellation of most recreational and business travel. In all, Berry says some 30 events scheduled for the Kentucky International Convention Center and the state fair and exposition center in Louisville were cancelled. The Kentucky Derby was postponed to the first Saturday in September, and officials called off the annual Derby Festival for this year.

The closures also hit Lexington-area attractions. The Kentucky Horse Park lost dozens of events, says Berry, including the highly popular Kentucky Crafted Market that was scheduled to open just days after the governor’s initial state of emergency declaration. VisitLEX President Mary Quinn Ramer says 176 conventions and meetings scheduled for Lexington this year have been cancelled. She fears more cancellations could come in 2021.

“That’s significant revue for not just our hotels but our restaurants, our tour companies, our transportation companies, our airport,” says Ramer. “There’s just a huge travel ecosystem that has been gravely impacted by all these cancellations.”

Closures in other states have also hurt locally owned businesses. Lexington-based H&W Management operates hotels in Kentucky, South Carolina, Tennessee, and West Virginia. President Don Howard says he only had to temporarily close one property but he’s laid off about half of his workforce. He also expects revenues to be less than half of what the company earned in 2019.

While bookings at his hotels have started to improve, Howard says the pandemic hit at the worst possible time. Under normal circumstances, hotels earn enough revenue during the busy spring, summer, and early fall months to carry them through the slower late fall and winter months. So without a profitable summer and fall, hotels may not have the cash reserves they need to survive through to next spring.

“It’s been tough up to this point but it’s going to get a lot worse before it gets better,” says Howard.

H&W Management was able to secure some money from the federal Paycheck Protection Program. But Howard says it was only enough to cover payroll, which is about 20 percent of his total expenses, for two months.

About $1 million of federal CARES Act money also went to 178 non-profit organizations around the state, according to Berry. But the rules did not allow relief aid to flow to local convention and visitor bureaus, which in Kentucky tend to operate as quasi-governmental agencies. Phillips says those entities normally receive appropriations from local hotel tax revenues.

“The destination marketing organizations, the unsung heroes of this industry because they work behind the scenes to bring in people and bring in conferences... most of their funding has evaporated,” says Phillips.

Phillips says they are lobbying Congress to include language in the next relief package that would make federal assistance available to these tourism agencies. Berry says with the state budget facing cuts from 16 to 29 percent in fiscal year 2021, additional stimulus money from Washington will be critical.

Adjusting to a New Normal

As the summer has progressed, many destinations around the state have started reopen with requirements for masking, social distancing, reduced capacity, and hand sanitizing.

“We’ve got quite a few attractions that people absolutely love, and we’re so happy that they’ve been able to reopen responsibly,” says Sherry Murphy, executive director of the Bowling Green Area Convention and Visitors Bureau. “We want to make sure that our visitors, the ones that are out and about, are protected.”

Kentucky’s famed Bourbon Trail has also had to adjust to the new pandemic safety protocols. Jeff Crowe of Heaven Hill Distillery says their visitor centers in Louisville and Bardstown are open but operating at reduced capacity. Tours that once welcomed 20 people are now limited to six.

“We are still seeing requests for people who want to come,” says Crowe. “We’re just having to turn them away because they can’t come in past that capacity limit.”

That’s left the industry to explore other ways to connect with bourbon fans, including virtual tastings where people gather in their own home to sample bourbons under the guidance of a distillery representative who connects by internet video. Heaven Hill has gone from doing an occasional virtual tasting to hosting two or three a day, according to Crowe. He says when one distiller devises an innovative way to connect with consumers during this crisis, they’re likely to share that idea with their industry colleagues.

“None of us have the answer to the perfect storm,” that is the pandemic, says Crowe. “The good thing is in the bourbon world we all have the support of each other and we don’t hide our successes from each other… We’re standing strong as a unit and not as enemies.”

Another Kentucky tradition – the state fair – remains scheduled for the end of the August. (State law actually mandates an annual showcase of agriculture and other key industries in the commonwealth.) As with everywhere else in the state, masking, distancing, and limited capacity will comprise the new normal. Berry says he expects attendance for marquee events like the livestock competitions and the World’s Championship Horse Show will be down by 50 percent – or maybe more, if the current surge in cases gets worse.

“We realize that things aren’t as usual,” says Berry. “It could get even more unusual, depending on what the rate of [coronavirus testing] positivity numbers do in the next few weeks.”

Cautious Optimism for the Future

What’s ahead for the state’s tourism industry as the autumn travel season approaches? Murphy says she expects a few Bowling Green-area events to happen this fall, especially as people get more accustomed to wearing face masks and maintaining a proper distance from one another. She also says she and her colleagues will be watching to see how events like the Street Rod Nationals in Louisville this weekend and the Kentucky Derby in September will handle their spectators.

“They’re all going to look different,” says Murphy, “but our main priority is to keep people safe and stop the spread as much as possible.”

At VisitLEX, Ramer says she’s “cautiously optimistic” about what the coming months could bring.

“Fall in Lexington means football and Keeneland, so we’re eager to see some of those things return,” says Ramer.

Berry says his agency is already preparing a new marketing message to help lure visitors back to the commonwealth once the pandemic subsides: “When you’re ready to travel again, Kentucky will be here for you.” Until then, Berry and Phillips say people should focus on following the health guidelines issued by federal, state, and local authorities.

“We all know there’s a single path, short of a vaccine, to get to the other side, and that is do the right thing,” says Phillips. “Wear the masks, do the sanitizing, do the social distancing.”

“The quicker that we buckle down, the quicker we will be back to life as usual,” says Berry. 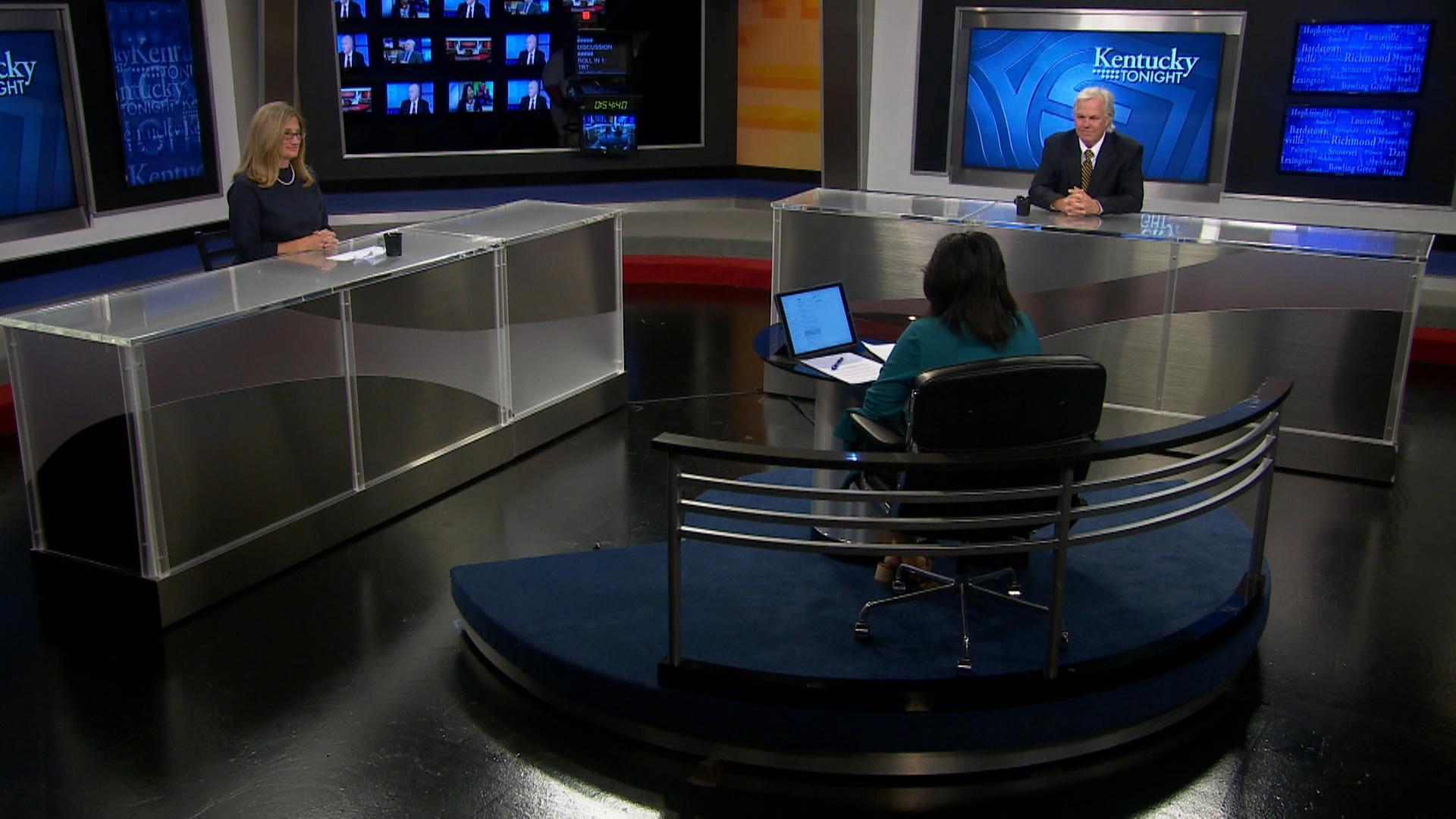