Renee Shaw and guests discuss bridging the urban-rural divide in Kentucky. Guests include: Al Cross, director of the Institute for Rural Journalism and Community Issues at the University of Kentucky; Alison Davis, Ph.D., professor of agricultural economics at the University of Kentucky and the executive director of the Community and Economic Development Initiative of Kentucky; and others.
Season 28 Episode 22 Length 56:34 Premiere: 07/12/21

Experts Discuss Challenges in Bringing Kentuckians Together Despite Their Differences

What defines a rural area in Kentucky depends on who you ask. Is it a place with a lower population density, a slower pace of life, and lots of open farmland? Or is it any place that’s not a metropolitan city like Louisville, Lexington, or Bowling Green?

While there is no universal definition, Kentucky’s rural and urban areas have their own unique characters, and those differences shape the social, economic and political dynamics of the commonwealth.

“A hundred years ago, the country was about half rural,” says Dee Davis, founder and president of the Center for Rural Strategies in Whitesburg. “Now it’s 80 percent metropolitan or more.”

About of quarter of the state’s population live in Kentucky’s five largest cities. Many more Kentuckians live in counties that adjoin these metro areas – counties that people may consider suburbia but that often maintain a rural flavor and outlook. Think of Oldham County in relation to Louisville, or Madison or Woodford counties in relation to Lexington.

“As our big cities continue grow out, they’re subsuming the rural areas that are turning into urban areas,” says University of Kentucky agricultural economist Alison Davis, who is also director of the Community and Economic Development Initiative of Kentucky.

That means the state’s urban areas and small cities are growing but outlying counties in the truly rural parts of the commonwealth are struggling to hold their populations. Kentucky State Data Center Director Matthew Ruther says those rural counties tend to have higher death rates and more outmigration.

Although more Kentuckians now reside in cities and suburban areas, don’t count out the rural folks when it comes to state politics.

“We have a rural-dominated legislature even though the state is majority urban in population,” says Al Cross of the University of Kentucky’s Institute for Rural Journalism and Community Issues.

Cross says the urban-rural differences can play out in a variety of ways in Frankfort. He contends urban voters tend to be more unhappy about economic issues, while rural voters bemoan changes to values and social issues.

“They see a country that is moving away from the way that they grew up and want to continue to live,” says Cross.

A challenge that’s unique to Kentucky, according to Cross, is its abundance of counties. He says residing in a small, rural county can limit the orbit people operate in, which can result in “provincialism squared.”

Rural and urban lawmakers can and do collaborate on policy, sometimes in surprising ways. In the 2021 legislative session, Senate President Robert Stivers of Manchester, population about 1,300, worked with Jefferson County lawmakers to pass a bill to create a special taxing district to benefit traditionally Black neighborhoods of West Louisville that have struggled for decades.

Yet partisan politics has exacerbated some rural-urban divides. Cross contends politicians have taught rural voters to be suspicious of urban people who they think have more money and power, or who may be people of color. Still Cross says he doesn’t think the divide between city and country people is any worse here than in other states.

“Because a lot of people in urban Kentucky are still rural in character,” Cross says. “They’re not all that far removed from the small towns where they grew up.”

Dee Davis says there have always been political issues that divide urban and rural Americans. But he urges people to avoid stereotyping either side and to realize that issues and populations are always changing.

“We can see rural counties and assume that they’re all white, or monolithic, or redneck, but the reality is that there’s lots of dynamism working in our rural counties,” he says. “What we need to concentrate on is making sure that we’re building inclusive ways to learn from each other and to create a common future.”

The Economics of Rural Places

“The merchant class of any small town has always been a primary piece of civic capital,” says Cross. “It’s where you get initiative, and innovation, and civic spirit, and you just don’t see that as much anymore because you don’t have those kinds of locally owned businesses.”

Compounding that problem is how some long-time rural residents resist suggestions from new faces in their communities.

“There are towns in this state that have not grown because people came to the town with fresh ideas and perspectives and wanted to be civically active and got the cold shoulder,” Cross says. “So they left.”

That reluctance to embrace people who want to help can also extend to government officials or academic researchers. Alison Davis says those outsiders bring some of that on themselves by how they treat locals. She says they sometimes arrive touting solutions to all of a town’s problems, reject input from local citizens, and then leave before anything substantive is accomplished.

“Here we come in trying to save the world and actually end up doing more damage than good,” she says. “I think folks in rural communities just get real tired of being told what to do… Those answers all have to come from within.”

Maintaining a thriving economy in even the most open and best-run communities is still hard. Davis points to an acclaimed program in Johnson County that trains people for advanced manufacturing jobs. The only problem is that graduates have to leave the area to find the work they’ve just been trained to do.

“Why aren’t we reaching out to where all those job openings are across the country and say, ‘Here we are, we’ve got this amazing pipeline of really excited people ready to go to work who have these skills,’” says Alison Davis. “But it’s just a really big mismatch.”

Dee Davis contends part of the problem trickles down from Frankfort, where he says state lawmakers have continued to invest in declining industries. Beyond simply providing job opportunities that would allow rural residents to stay home and earn a good wage, Dee Davis says local leaders should also focus on quality-of-life issues.

“The future of a town is people want to live there. There’s a caring economy with health care, people want good schools, they want technology so that they can work,” he says. “If you create a town that you want to live in, you’ve got a lot better shot at building from there an economy than trying to coax a widget factory in or keep an extractive industry that’s beyond its time.”

Favoring Actual Communities Over Virtual Ones

The panelists agree that uniting residents of a major city, a small town, or the rural countryside to tackle local challenges has become increasingly difficult thanks to social media. Cross says social media sites can provide a great service to people.

“But when it comes to building community, it’s pretty damn bad,” says Cross.

“We’ve only so much time on our hands,” he continues, “and the more time people spend in in these non-geographic virtual communities, the less time they have to spend with their geographic communities and put some initiative and effort into addressing their problems.”

“The division is there, it’s accelerated by social media like Facebook and other platforms, but if we can frame what we’re doing with what our community needs, then I think we have a chance to transcend some of these differences that we think are intractable,” he says.

Alison Davis says mainstream media could help by presenting positive stories about the successes happening outside of metro areas, instead of falling back on negative stereotypes about poor and rural Americans. Matthew Ruther also says education can help ease divisions among urban and rural citizens.

“Our universities have a role here, our elementary and high schools have a role in bridging this gap [and] understanding these different places that we come from,” says Ruther. 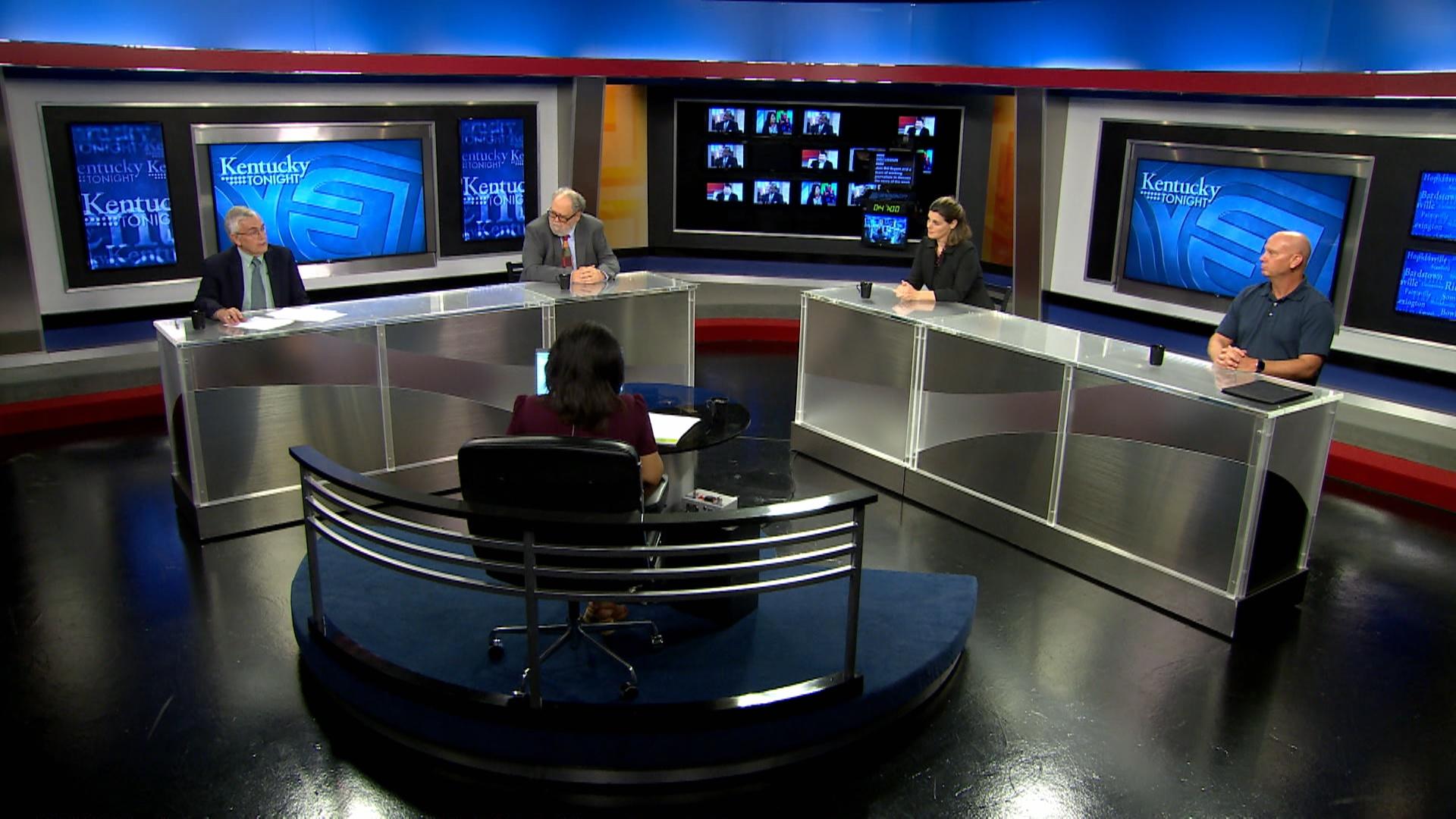