That was just the first step by Republican lawmakers and business interests who want to protect individuals and corporations from what they see as frivolous lawsuits and oversized awards to plaintiffs for damages.

KET’s Kentucky Tonight explored the medical review panel law, which itself is being challenged in court, as well as other efforts at tort reform in the commonwealth. The guests were Rep. Jason Nemes (R-Louisville), chair of the House Budget Review Subcommittee on Justice, Public Safety, and Judiciary; Rep. Chris Harris (D-Forest Hills); Vanessa Cantley, vice president of the Kentucky Justice Association; and Ashli Watts, vice president of public affairs for the Kentucky Chamber of Commerce.

Protecting Against Frivolous Medical Claims
Under Senate Bill 4, any medical malpractice lawsuit that’s filed against a doctor, hospital, long-term care facility or other health care provider would first go before a medical review panel. That panel will consist of three Kentucky physicians with expertise in the specialty under question in the lawsuit. The plaintiff and defendant each select one doctor, then those two doctors select a third specialist to round out the panel.

The panel has up to nine months to review the case and give an expert opinion about the malpractice claim. Regardless of the opinion rendered, the plaintiff can still take their case to court, and the review panel opinion can be admissible as evidence during a trial.

Tort reform advocates say the review panels prevent malpractice claims that have little or no merit from going to an expensive and lengthy jury trial. The Kentucky Chamber’s Ashli Watts says this will make it easier for the state to attract good doctors and health care providers and lead to lower medical malpractice insurance premiums.

“Until this past General Assembly, every state around us had some sort of protection for medical providers or some sort of tort reform,” says Watts. “Kentucky really was the outlier.”

That’s given the state a reputation for being especially litigious, says Watts. She says Kentucky ranks 39th among states for its legal liability climate, and Louisville ranks seventh among all national media markets in advertising purchased by personal injury lawyers.

Rep. Jason Nemes, who is an attorney practicing in Louisville, says lawyers should be held accountable for filing frivolous claims. He blames out-of-state law firms for bringing many meritless cases to trial.

“The problem we have in Kentucky is everything is supposed to go to a jury, so the costs on the businesses are exorbitant,” Nemes says. “I’m for the juries… but I want to make sure that only legitimate cases get to juries.”

‘Additional Strings on Our Civil Justice System’
Vanessa Cantley of the Kentucky Justice Association says the belief that frivolous lawsuits are swamping Kentucky’s courts and scaring away medical professionals is false. She says the commonwealth has more doctors per capita than Indiana and Texas, two states that have long had strict tort reform laws. Plus she says the number of civil cases has dropped by 20 percent in the past decade, and medical negligence represents a fraction of the total claims filed.

As for malpractice cases in Kentucky, Cantley says only about 500 such claims are filed in an average year, yet the state averages about 2,700 preventable deaths a year due to medical errors.

“That should tell you everything you need to know about whether there are too many frivolous lawsuits when 2,200 people aren’t making claims at all,” says Cantley.

She also argues that the review panel process delays justice for those who have been injured, many of whom are elderly Kentuckians who may not live long enough to see their claim decided by a jury.

Critics of SB 4 also contend the review panels could subvert state and federal guarantees to trials by a jury of one’s peers. Harris says that concern even led several Republicans to oppose the legislation.

“When we vote to put additional strings on our civil justice system, we’re taking away the rights of the very people who voted for us and sent us to Frankfort,” says Harris. “So I think that’s why we’ve seen some of the bipartisanship.”

Harris goes further to say the law takes legal proceedings that belong in the judicial branch of state government and puts them into the executive branch. The Cabinet for Health and Family Services would oversee the panels.

A lawsuit filed in Franklin Circuit Court is challenging the constitutionality of SB 4. The suit asserts that the law discriminates against medical malpractice claimants who must go through the months-long review process while people who bring other kinds of civil suits get immediate access to the courts.

Lawmakers worked for years to craft review panel legislation that would be constitutional, says Watts. She contends the panels don’t preclude a jury trial and that panel members can even be called as witnesses during a trial. The law allows plaintiffs to continue on to a jury trial even if the review panel decides in favor of the defendant.

Cantley says the panels are an unnecessary level of bureaucracy and that the legal system already has protocols to dissuade lawyers from filing meritless claims. She says a number of states that approved review panels have seen them invalidated by the courts on constitutional grounds, or disbanded by lawmakers when the panels proved ineffective. In her experience as a trial attorney, Cantley says Kentucky juries are always fair and discerning even when she disagrees with their decision.

“Jurors are really, really good at seeing through garbage and only awarding what is necessary to compensate people… and to punish the individuals who did wrong to deter it from happening again,” she says.

“Jurors, for the most part, do a good job of sifting through the garbage, but the system doesn’t… That’s what we’re trying to get right,” Nemes says. “In Kentucky it’s harder to get a case kicked out, a case that has no merit, than anywhere in the country.”

Other Reforms Under Consideration
While the court decides the constitutionality of the state’s medical review panel law, tort reform advocates are gearing up to push other measures in the 2018 legislative session. Watts says the Chamber of Commerce wants to see legislation to allow health care providers to keep their peer review processes kept confidential. They also advocate for requiring attorneys to file an affidavit of merit with any malpractice claim to show that a medical professional has reviewed the case and agrees that a standard of care was breached and caused harm to the plaintiff.

Cantley says attorneys already file such affidavits and accepts efforts to further codify that procedure. But she opposes peer review protections saying that an injured party and the courts have a right to know if medical professionals believe a colleague did not provide proper care.

The Chamber also wants caps placed on non-economic damages (such as pain and suffering) that juries can award to plaintiffs in civil cases. Many states already have such limits, including several of Kentucky’s neighbors: Tennessee has a cap of $750,000 while West Virginia allows damages to top out at $2.2 million, according to Watts. She says the caps give juries a framework for deciding damages so that awards won’t be erratic or excessive.

But Kentucky’s Constitution specifically forbids the General Assembly from limiting the damages that can be recovered in wrongful injury or death cases. So a constitutional amendment would be required to allow such caps to be enacted in the commonwealth.

“We are pragmatists. We know that medical review panels passed [the state House] with 51 votes,” says Watts. “A constitutional amendment needs 60 votes, so we have some work to do, but every year that we don’t do it is a year that other states get ahead of us.”

Cantley says caps hurt people who have endured the worst injuries or suffered the loss of a loved one. Plus she says it’s unfair for Frankfort politicians who’ve heard no testimony to arbitrarily limit what an injured party might receive.

Harris also opposes the caps because it means tinkering with the state’s founding document.

“It scares me to death because when we start changing this part of the Constitution, what part are we going to change next? Is the Second Amendment next?” Harris says. “Before we even consider changing it in the slightest, we need to be very, very careful and very, very deliberate.”

Nemes says he’s not sure he would support capping jury awards, and he doubts there’s enough Republican support to change the constitution to make that happen. But there are other reforms he does want to pursue. Nemes plans to revive legislation he proposed in the 2017 session to address how the Kentucky Attorney General’s office engages outside counsel in major civil cases. He acknowledges that the AG’s staff isn’t big enough to handle all litigation and that hiring outside firms to handle especially large or complex cases is prudent. But he wants to bring more transparency to those arrangements and limit the contingency fees paid to those firms. Nemes contends the majority of settlement moneys won should go to the state and to the injured parties, not to the attorneys.

Harris and Cantley say they support the transparency ideas that Nemes advocates, but they oppose capping the contingency fees. Harris says firms take a huge risk by accepting these cases, and need to have a way to recoup their costs if they win a settlement. Cantley says the caps could lead to the unintended consequence of attracting law firms that don’t have sufficient experience or resources to handle a huge legal battle on behalf of the commonwealth.

Representatives Nemes and Harris are also crafting legislation to address judicial redistricting to shift judges from circuits with light caseloads to circuits with more cases. Nemes says he also plans to introduce bills that would increase judicial pay and have judges elected rather than appointed. Harris says he also wants to increase the compensation jurors receive, which is now set at $12.50 per day.

Although these matters don’t specifically qualify as tort reform, Nemes says anything that makes the state’s court system work better is good for the commonwealth. 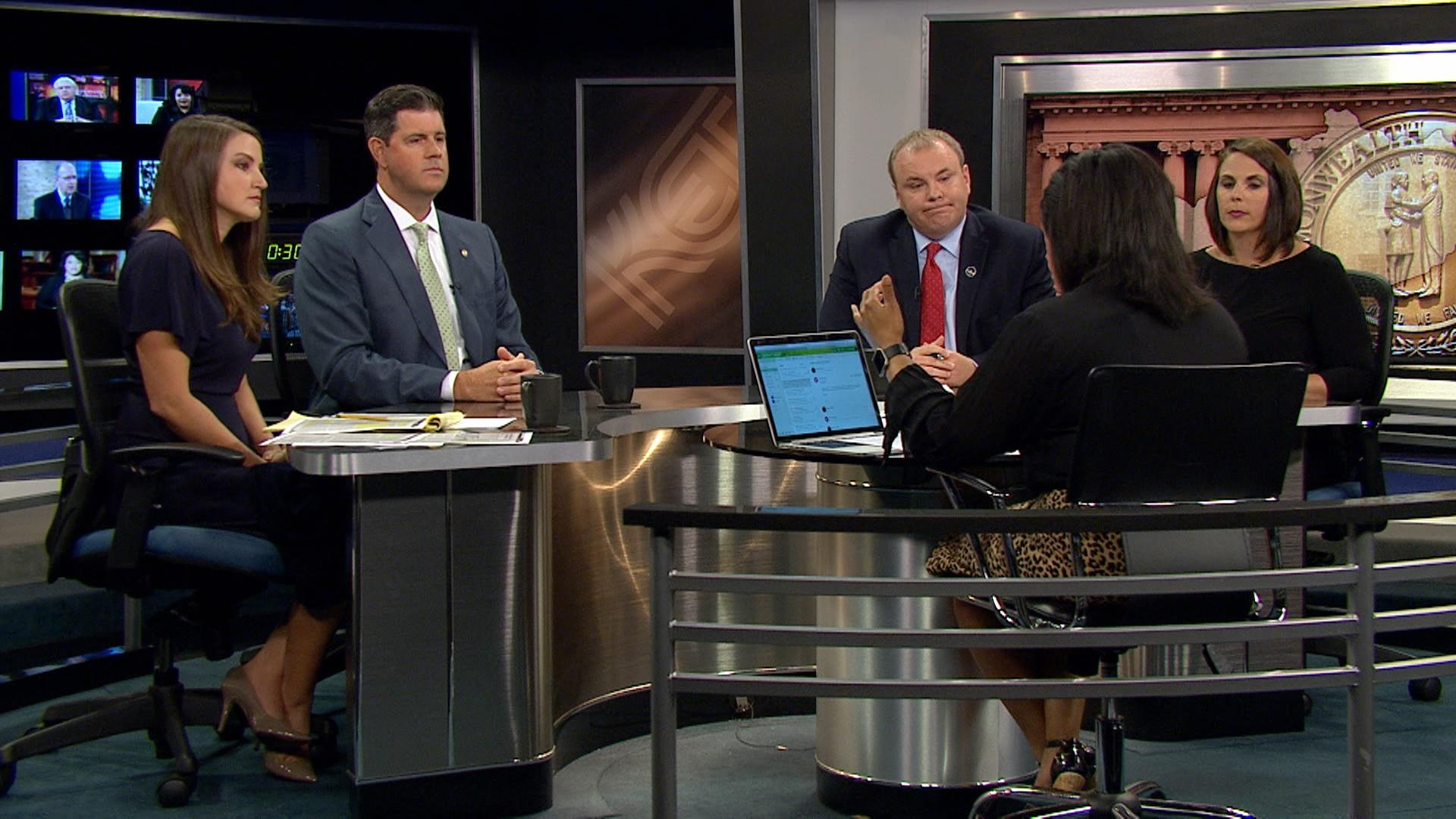