As the state continues to claw its way out of the recession, the recent budget report from the Beshear administration offers some promising numbers:

Fiscal year 2015 ended with a $165 million surplus, marking the fifth straight year of growth for the commonwealth. Personal and business tax revenues exceeded projections. And the state’s “rainy day” reserve fund is at its highest level since 2007.

But those silver linings come with some dark clouds as coal severance tax receipts continue to plummet, pension shortfalls remain unresolved, and bills for expanded Medicaid will soon start coming due.

Tax Receipts Sustain Growth
The legislators say they are “cautiously optimistic” about the state’s financial outlook, given the surplus that remained at the end of last fiscal year and the preliminary figures for July that show a strong start to the new fiscal year. State budget officials attribute much of the growth to higher-than-expected receipts from personal income and business taxes as well as Kentucky’s sales tax.

“I certainly think that it’s an indication that people have more disposable income,” says Sen. McDaniel. He says that leaves shoppers with more money to spend on things other than food and pharmaceuticals, which aren’t subject to the sales tax.

Rep. Rand adds that the sales tax receipts are also a good indicator of people’s faith in the economic recovery. He says people are spending more because they are confident that they will have a job in the future.

“The diversification of our code has carried us pretty well through the recessionary period and certainly is performing well now,” says Webb. “It’s not perfect and we do need to work on it because it needs to evolve, but I’m pretty proud of the allocation.”

Tax reform remains a high priority for the lawmakers, although they don’t see it happening in the 2016 session. Rep. Rudy notes that along with a new governor, all of the state House and half of the Senate will be up for reelection next year.

“There will be winners and losers in comprehensive tax reform and everybody is going to be scared of the ballot box,” Rudy says. “It shouldn’t be that way but that’s the world that live in.”

Revenues from the gasoline tax have declined as fuel prices dropped, and cigarette tax proceeds dipped as Kentuckians cut back on smoking. Lottery proceeds were also $16.5 million lower than expected. Rand attributes that to fewer enormous jackpots and the uncertain impact of the new KENO game.

Then there’s the coal severance tax.

As the state’s coal industry struggles with declining production, severance revenues have dropped as well. Those receipts have fallen for three consecutive years, and are $50 million less now than they were in 2013.

McDaniel blames what he sees as hostile regulations imposed by the Obama administration. Rand contends market forces and competition from natural gas have driven coal into decline. He acknowledges that coal severance money helped sustain the state during the early years of the recession, but Rand says it’s time to accept the new realities of the energy marketplace and focus on other ways to help the state’s coal-dependent areas.

“I come from a tobacco-producing region and when the [tobacco price support] program left, I thought it’s the end of rural Kentucky as I knew it,” Rand says. “But we’ve rebounded… Our ag economy is stronger than it’s ever been, it’s more diverse than it’s ever been, and we’ll do that with coal too.”

But Sen. Webb, who worked as a miner, isn’t ready to write off coal. She says if regulators will allow coal to be mined, then the state can supply the growing demand in foreign markets. Plus Webb says she’s dubious about the prospects for natural gas since it’s also a fossil fuel and there are environmental concerns about the fracking procedures use to capture it.

Pension Obligations Overshadow Spending
The biggest cloud – or perhaps thunderhead is a more apt description – hanging over the state budget is the billions in unfunded liabilities in the pension systems for public school teachers and state employees.

McDaniel blames Gov. Steve Beshear and his predecessors for not requesting enough annual funding to keep the systems solvent. McDaniel adds that in the next biennium alone, the state will need to put $150 – $200 million into the Kentucky Retirement System to meet its basic obligation. He contends the reforms the General Assembly enacted in 2013 will rescue all the state pension systems except for the teachers’ retirement plan.

“This problem took a long time to develop and will take long time to get out of,” says McDaniel.  “But Senate Bill 2 is a solid, sustainable solution that was bipartisan across houses with the governor’s help, and we will get out of this problem.”

Earlier this year, Senate Republicans stymied a plan by House Democrats to shore up the Kentucky Teachers’ Retirement System by issuing $3.3 billion in state bonds. Now a new working group created by Gov. Beshear is exploring other options for stabilizing KTRS.

“I’m hopeful that this group that’s meeting together is going to come in with some real solutions and some real ideas other than just open up the checkbook and bonding,” says Rep. Rudy.

Medicaid Costs Also Loom Large
Senate Budget Chairman McDaniel says the expansion of Medicaid will also put a significant dent in the state budget to the tune of $250 million in the next biennium. That’s largely due, he says, to the higher than expected number of Kentuckians who enrolled in Medicaid.

A study commissioned by the governor’s office says the Medicaid expansion will pay for itself over time through reduced medical costs and more jobs created in the health care industry. McDaniel says he’s concerned about jobs that might be lost as the changes to Medicaid and the managed care system unfold in the years ahead. He calls the overall health reforms enacted since passage of the Affordable Care Act a “mixed bag.”

House Budget Chairman Rand says those changes and the state health exchange Kynect have been a success by any standard. He contends the reforms have helped poor and working Kentuckians get the health care they need.

“I think the Medicaid expansion is working,” says Rand. “I believe it’s creating jobs, I believe it’s reducing costs, [and] I believe it’s taking people with chronic illnesses and getting them treatment sooner.”

Advice for the New Governor
Whoever becomes the next governor, Rand says he would encourage them to review the Beshear Administration’s budgetary blueprint. He praises the Democrat’s strategy for promoting growth while holding firm on spending.

McDaniel says he hopes the new governor will propose a budget that doesn’t rely on accounting tricks to achieve balance. He says the new chief executive will also have to find creative solutions to the KTRS liabilities, while also investing in jobs that will grow the state’s economy.

“I would tell the next governor to be mindful that your budget is the reflection of how you prioritize… and how you view the people that you’re governing,” Webb says. But she also adds this caution: “Don’t look at the surplus and get googly-eyed because it’s not really a surplus.”

Rep. Rudy says he would challenge the governor to get to know members of the legislature and use those relationships to work toward consensus that can move the state forward. 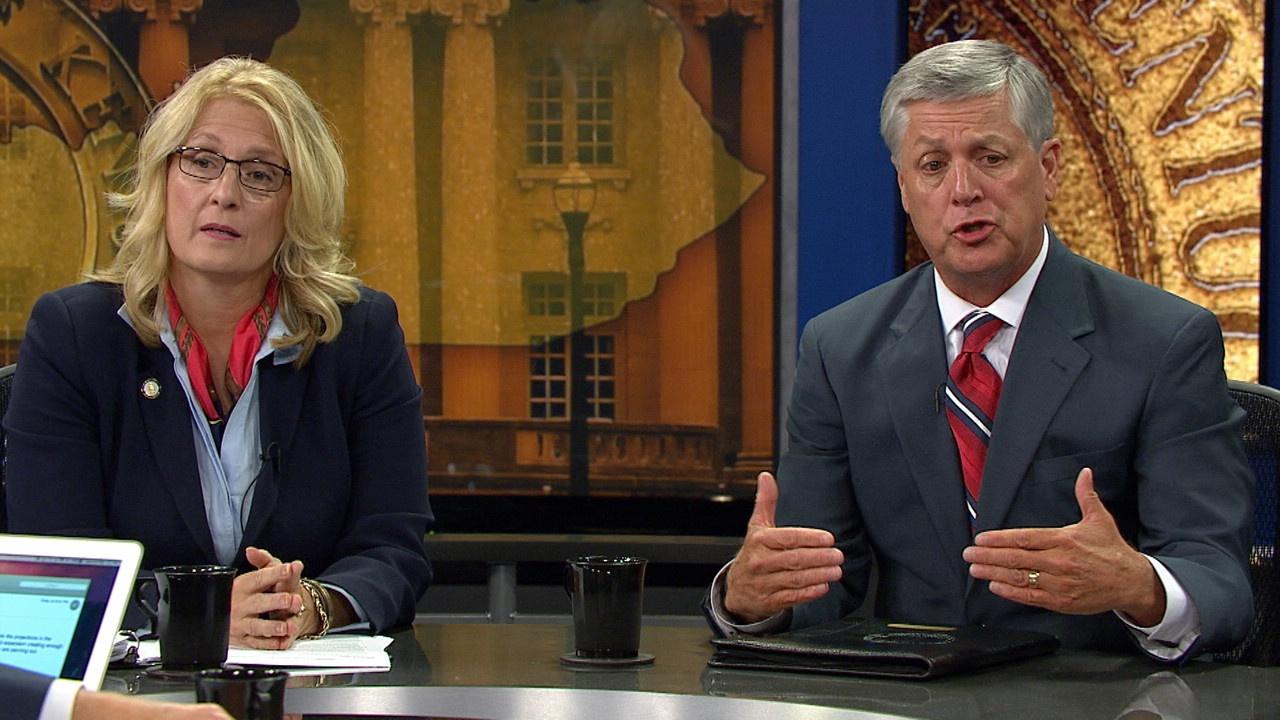