Gray is a native of Glasgow and board chairman of his family’s industrial construction company. He served on the Lexington-Fayette Urban County Council and has been mayor of the city since 2010. Gray touts his work to turn a $30 million city budget deficit into five years’ worth of fiscal surpluses. The Democrat also says he reformed Lexington’s underfunded pension plan, overhauled its employee health insurance program, and created 15,000 new jobs in the community.

Paul is a Bowling Green ophthalmologist who won his first term to the U.S. Senate in 2010. The Republican says he’s introduced nearly 500 bills and had 40 floor votes. He worked to have soldiers stationed overseas counted on hometown census rolls; to prevent the Army Corps of Engineers from charging communities to draw drinking water from Lake Cumberland; and to expand treatment options for heroin addicts. Paul made a failed bid for president earlier this year.

The Economy, Debt, and Jobs
Paul says the nation is burdened by a combination of too much debt, high taxes, and over-regulation. He says the $20 trillion national debt is limiting economic growth and has resulted in 2 million fewer jobs.

“To be a country that is great and growing, I think you have to have a balanced budget,” Paul says. “Republicans and Democrats have let us down with spending.”

The Republican wants to scale back federal regulations, especially those governing agriculture and the coal industry, and he proposes to slash the corporate tax rate to below 15 percent. He also wants to add a balanced budget amendment to the U.S. Constitution.

Paul says he supports investing in infrastructure improvements as long as those projects don’t add to the debt. He says he would pay for new roads and bridges by cutting aid to other countries and by encouraging American companies to repatriate more of their foreign profits through a temporary tax break.

Gray argues that his opponent is too focused on the debt and that Paul’s “wild ass” philosophies won’t create jobs or build bridges and highways. The Democrat says the debt as a percentage of the gross domestic product is at historically low levels and that investors are confident in the U.S. economy.

Job creation and infrastructure improvements are Gray’s top economic priorities. If elected he says he would propose national infrastructure legislation during his first weeks in Washington. He would pay for those projects by fostering public-private partnerships and by offering tax credits to companies to invest in infrastructure. He says raising taxes to generate funding would be the last option he would consider.

Gray contends the nation can build its way out of the sluggish economy.

“We’re talking about return on investment for our country and making investments that will give… the next generation the opportunity to actually have a better life,” Gray says.

On the minimum wage, Gray supports an increase to the pay rate to help struggling, low-wage employees, especially women. Paul opposes increasing the minimum because he says it will result in higher unemployment among low-skilled workers and those entering the job market for the first time.

National Security
The candidates agree that Congress should vote to authorize taking the nation to war. But they differ on how to best fund those actions.

Gray claims that Paul wants to cut military spending and Gray’s campaign has run commercials that feature other Republicans criticizing Paul’s defense policies. But the senator says he’s actually proposed increases to military funding since he’s been in office. The Republican says he’s also worked to give the Pentagon more flexibility in how it allocates defense dollars.

The Democrat says he would encourage “smart, intelligent investments” in defense and intelligence gathering. Gray says he would also maintain foreign aid to American allies. He says committing military advisers to Iraq was a prudent move to help keep Americans safe at home.

In terrorism investigations Paul says intelligence gathering should not compromise Fourth Amendment protections against unlawful searches. He says the government should get access to personal records only when law enforcement officials can show probable cause and have obtained proper search warrants.

Court Appointments
The U.S. Supreme Court has had only eight justices since the February death of Associate Justice Antonin Scalia. That seat has remained vacant because Senate Republicans have declined to consider President Obama’s nominee, Merrick Garland. Gray says if he were senator, he would take up the nomination.

“I think the Senate should’ve done its job and I don’t know why it didn’t,” Gray says. “I think most people in America really don’t understand that except it’s another illustration of the gridlock and the dysfunction in our system.”

In considering any Supreme Court nominee, especially under a Hillary Clinton presidency, Paul says would privately interview the candidate to learn their philosophies on executive branch authority.

“I can’t imagine voting for a Clinton nominee unless she were to appoint somebody who believed in the separation of powers as the founders wrote into the constitution,” Paul says.

Other Issues Facing Kentuckians
More than 1,200 Kentuckians died of drug overdoses in 2015 in the escalating scourge of heroin and prescription opioid abuse.

To combat the epidemic Paul says he worked with Sen. Ed Markey (D-MA) on bipartisan legislation to allow health care providers to prescribe the addiction treatment drug Suboxone to more patients. Paul also voted for the federal Comprehensive Addiction and Recovery Act (CARA) to expand treatment options in states and communities nationwide. But the senator subsequently voted against funding CARA. He says it was part of an omnibus spending bill that he opposed because it added to the national debt.

Gray calls Paul’s rationale to reject the CARA appropriation obtuse and arcane. The mayor says local communities desperately need more federal support and funding to fight drug addiction. The mayor touts his creation of a heroin task force in Lexington in 2013, and his work to provide the overdose reversal drug Naloxone to first responders.

On higher education costs, Gray says individuals should be allowed to refinance their student loan debts. Paul says he wants to enable people to deduct the principle and interest of their student loans over a longer period of time.

“I look at a student loan as sort of being a work expense,” Paul says. “I think you ought to be able to deduct it during your whole work career.”

To address the decline in the coal mining jobs in the commonwealth, Paul says he wants to reverse what he sees as onerous regulations against the industry and power plants that burn coal. He argues that anyone who supports Democratic presidential nominee Hillary Clinton should be disqualified from representing Kentucky because Paul says her proposed policies would hurt coal miners and the state as a whole.

Gray counters by saying Paul has failed to create any new jobs for the state’s coal-producing counties during his time in Washington. The Democrat says he sees the issue very differently than Paul, who once called coal a dirty form of energy.

“I believe coal is a part of our energy future and I believe that we should support the miners,” Gray says.

Gray favors the federal Coal Miners Protection Act, which would fund pension and health benefits for retired union miners nationwide. Paul opposes the bill because it doesn’t protect all former miners. The Republican says the real solution to the pension problem is to lift regulations so that the coal industry can once again thrive and mining jobs can rebound.

The sharpest exchanges during the program came when Gray chastised Paul for being more focused on his presidential aspirations than on the needs of his constituents. The Democrat challenged the senator to pledge to serving out his full term if elected. Paul responded by saying it was hypocritical of Gray to levy such a criticism since he was running for higher office while still serving as mayor of Lexington. 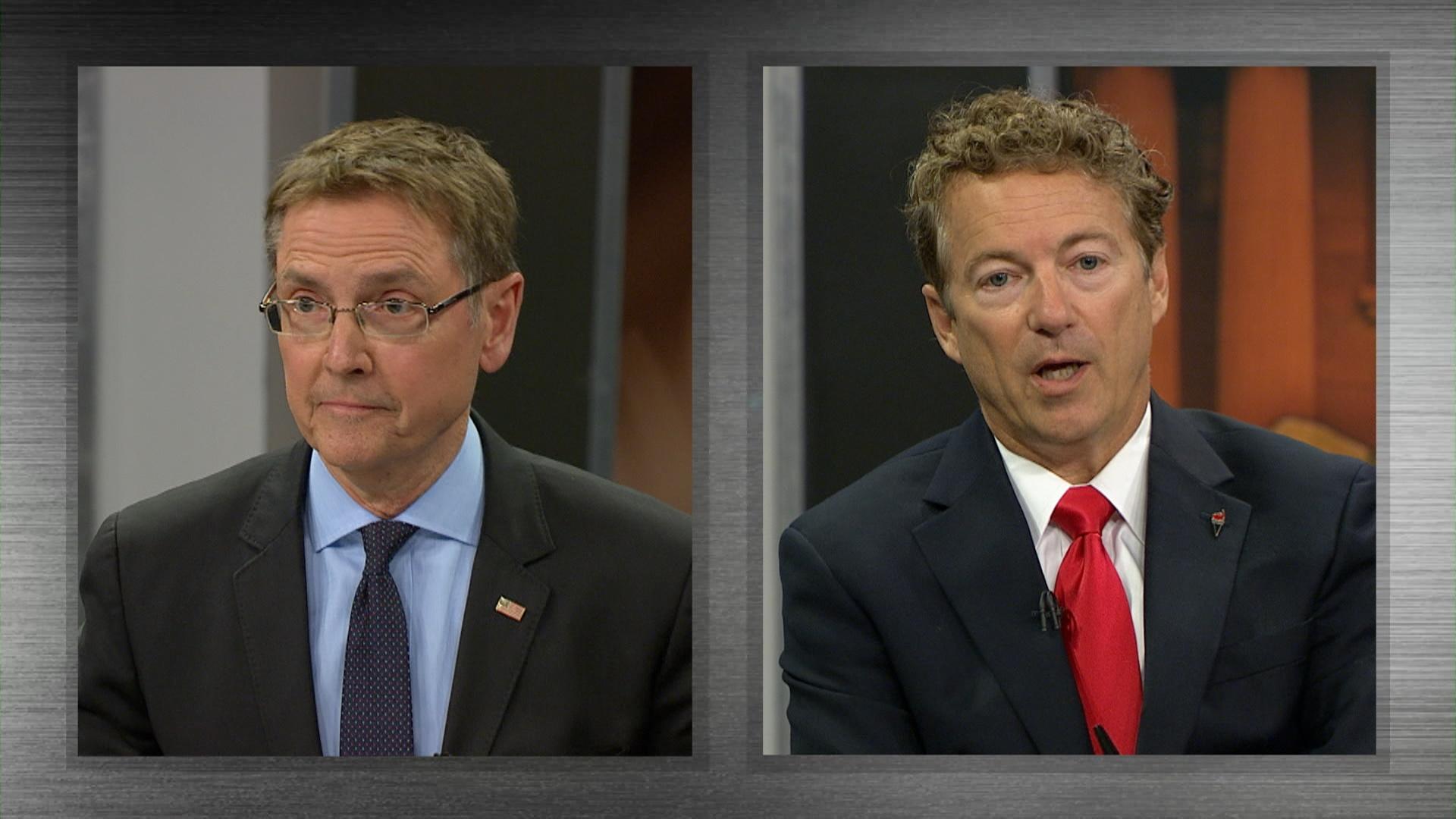