Kentucky has a rich literary tradition, and one of the most acclaimed and vibrant movements in the past quarter-century has been led by a community of talented black women writers. These writers, each with unique creative perspectives, explore the ways black women have been historically marginalized and, in many ways, continue to face discrimination and racism in contemporary society.

On May 3, KET’s Renee Shaw welcomed three -- Nikki Finney, Crystal Wilkinson, and Bianca Lynne Spriggs -- to a panel discussion at Lexington’s Carnegie Center for Literacy and Learning. At the forum, the panelists discussed the myriad challenges facing African American women writers in the South and how their experiences have inspired their own artistic endeavors through the years.

Finney is Chair of Creative Writing and Southern Letters at the University of South Carolina and previously taught creative writing at the University of Kentucky for 21 years. She has published four books of poetry, including "Head Off & Split," winner of the National Book Award for Poetry in 2011.

Wilkinson currently teaches writing at Berea College and has published three books, including her latest, "The Birds of Opulence." She also owns the Wild Fig Bookstore in Lexington.

Spriggs is a doctoral candidate at the University of Kentucky whose work has been published in a variety of formats, including several of her own releases. Her most recent published work is this year’s poetry collection "Call Her By Her Name."

Spriggs states that her creative work investigates how the black body is treated as a site of crisis in society and how certain racial narratives continue to persist in Kentucky and throughout the United States in overt and subtle ways.

“But what you should know first and foremost about me is that I am primarily a speculative writer,” she says. “I have the benefit of walking through this world with my imagination as a companion. Whether I am writing about mermaids or bird women or Amazonian deities or cyborgs, or the cadavers of slave women being sold across the Mason-Dixon Line for spare parts, everything I write begins with the question, ‘What if?’”

Spriggs believes that language is “the scaffolding of narrative,” and that it is the key that can unlock a meaningful, transforming, connection between the artist and her audience. Stories are how we make sense of the world, she says, and by creating new narratives about her own experience as a black woman, Spriggs says she can enlarge her audience’s understanding.

She reads the persona poem “Big Black Bitch,” which is based on an actual person named Mary Fields. Known as “Black Mary” or “Stagecoach Mary,” she was the first black woman U.S. postal worker, and had a reputation as someone not to be crossed. Her poem recreates Mary’s response when called the title epithet by a cowboy. She believes that Mary’s experiences are a part of a larger cultural memory that exists among members of a marginalized group and can be given new life by a writer.

Spriggs says that when a reader or an audience member approaches her and says that they “can’t imagine” what she’s been through as a black woman, she regards that as a sign of failure – either of their imagination, or of her ability to engage it. She says that black writers have been kindling the imagination of audiences for generations, and have brought about social change as a result.

“Because social change begins as personal change,” she says. “[Black writers] knew that if their words reached enough people’s imaginations, then the current paradigm could not remain the same. And so that is what I do for a living. Book by book, poem by poem, word by word, I’m coming to find you, wherever you are, and explore the universal between us.”

Unapologetic in Struggle and Celebration

Wilkinson begins her remarks with a reading of the late Lucille Clifton’s poem “won’t you celebrate with me.” The poem affirms the black woman’s unwavering drive to speak out and be heard, ending with the line “Every day, something has tried to kill me, and failed.”

Still, Wilkinson points out that the struggle against racism has led Clifton to celebrate “a kind of life” in her poem, and far from a perfect one. The poem is realistic in acknowledging the effects of the struggle, and inspiring because of it.

“I have come to believe that this is the space in which black women live,” Wilkinson says. “Every single day, we shake off those things that try to kill us literally, figuratively, psychologically, financially, and we celebrate survival, and move on to face the next thing that will inevitably come to try to take us out. Being black in Kentucky means simply that I am a black woman trying to live in America.”

The concept of double consciousness, as defined by W.E.B. DuBois in his landmark book "The Souls of Black Folk," requires African Americans to create different, inauthentic, identities in order to exist within a racially oppressive society. Wilkinson says that she has tussled with that sense of self-doubt all of her life, and is reminded of it every day, becoming invisible in certain spaces and hyper-visible in others.

Wilkinson says that she is constantly aware of the obstacles her children face growing up in a country where they are held to a different standard than white kids, and that she still feels the need to prove herself despite holding academic degrees and owning her own business.

Yet Wilkinson also finds inspiration in how she, her family, friends, and the black community have thrived, despite these obstacles. She also proclaims her deep pride in her birth roots in Appalachia and in her adopted hometown of Lexington.

Finding a Place of Inspiration

Finney recalls how much support she received in Lexington when winning the National Book Award and welcomes being back in “this sacred space” of the Carnegie Center. “When you get back to this place where you became a writer – and this is where I became a writer – there are sweet ghosts all around.”

She recites a poem titled “Pirate Jenny.” It was inspired by Nina Simone’s version of the Kurt Weill-Bertolt Brecht song of the same name and draws imagery from several alarming news stories from recent years involving black women.

Finney’s poem ends with her childhood remembrance of Arthur Ashe’s celebrated Wimbledon tennis tournament win in 1975. Later in the discussion, she says that it is her calling, along with other kindred artists, to bring these stories to public awareness. She feels that black people are stereotyped in much of contemporary media and that this gives the mainstream white audience a skewed and harmful view of black women and the daily challenges they face.

“If we ever begin to not fear young black girls, because they dress a certain way, speak a certain way, have a certain vocalization of who they are – yes, sometimes black girls are loud, but that is because no one’s paying any attention to them,” Finney says. “We need to do hands-on work. There are people in this audience who do hands-on work every day. And that’s why I’m here, because we can’t keep doing this.”

Calls to Consciousness, and to Action

Finney, Wilkinson, and Spriggs believe that their obligation as black female writers is to engage the audience’s imagination, and by doing so, to inspire them to fight for racial and gender equality. They conclude the discussion with positive encouragement, but also understand that making a commitment to take action requires bravery.

“The biggest question I get from white liberal women is, ‘What can we do?’ ‘What can we do to help?’” Wilkinson says. “And I think [the answer is] to educate each other when [African Americans] are not around. That’s where the real learning comes in. What do you say when somebody says something that you know is wrong? Do you continue to sip your wine and shake your head in the corner, or do you step forward and make it known that this is not the correct thing to do? Do your work when we’re not around.” 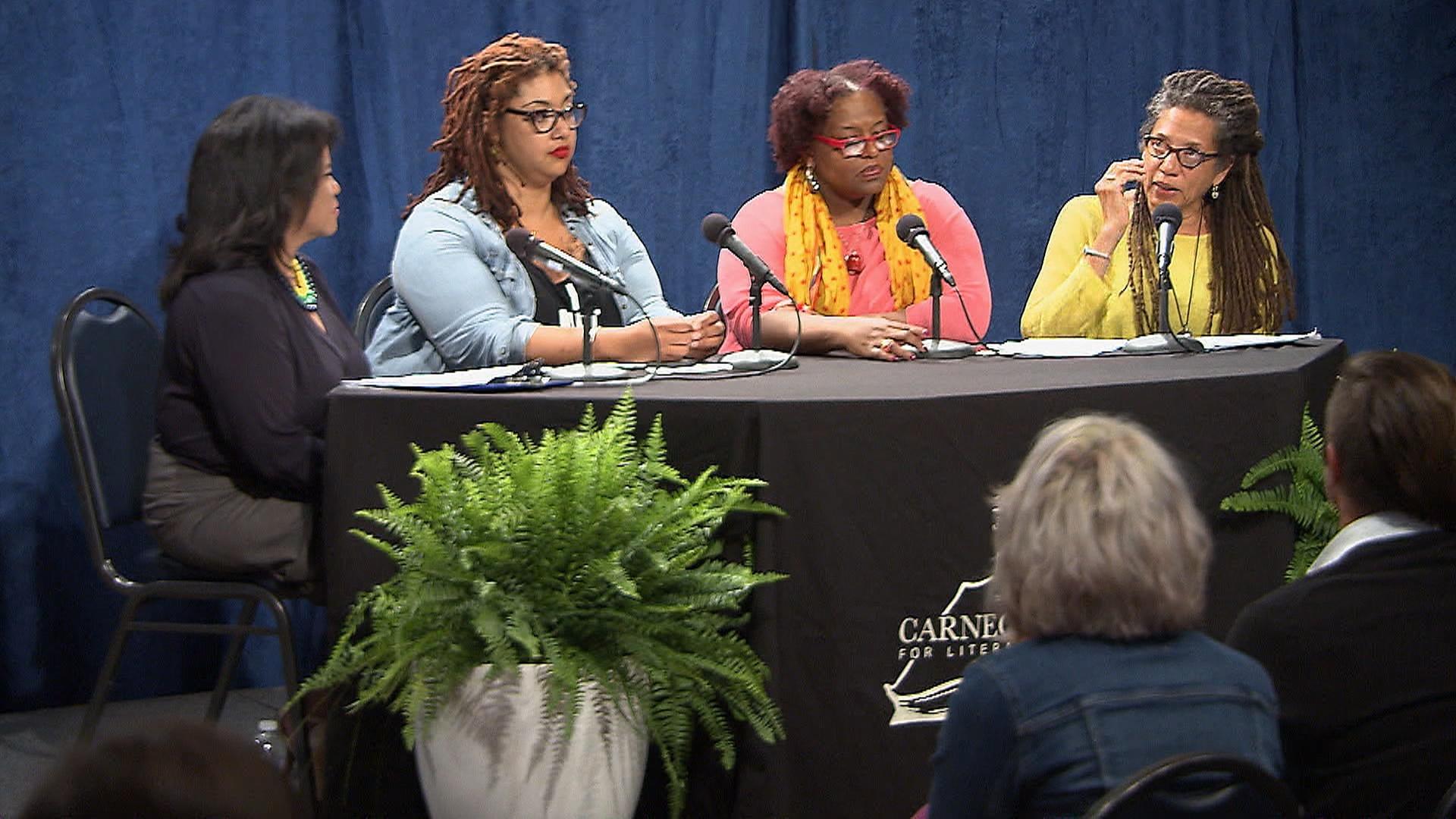