Just days before Christmas 2019, Christian Gwynn was walking home in his West Louisville neighborhood in time to meet the 10 o’clock curfew set by his parents. The 19-year-old loved basketball, the outdoors, and music, and dreamed of being so successful that he could support his entire family.

But instead of enjoying a long and happy life, Gwynn died that night after being shot twice by a person firing from the backseat of a passing car.

“All children are not perfect, but my son did nothing that night for that car to drive by and roll down their windows and take his life,” says Krista Gwynn, the victim’s mother.

In late April, Louisville Metro Police finally made an arrest in the case, another Black youth who was slightly older than Gwynn at the time of the shooting. Even as Gwynn’s parents and surviving siblings struggle to make sense of Christian’s death, the family continues to face the threat of gun violence.

“I sit in my driveway and… I can hear the AKs going off here, the 9 millimeters, the .38s in any direction,” says Navada Gwynn, Christian’s father.

“If those gunshots sound like they’re too close, my kids know what to do,” says Krista Gwynn. “When they hear one pop, they stop and they try to figure out which way could that be coming from, and that’s a shame that my 13-year-old is listening for gun [shots].”

Homicides ‘Trending in the Wrong Direction’

Unfortunately, Christian Gwynn’s murder is far from an isolated case in Kentucky’s largest county. He is among hundreds of Louisvillians killed in gun violence in recent years.

“From 2014 to 2016 in Louisville, we had a 110 percent increase in homicides,” says Russell Coleman, the former U.S. Attorney for the Western District of Kentucky. “We’re trending in the wrong direction.”

In 2019, the year Gwynn was shot, there were 93 homicides in Louisville. In 2020, despite a raging pandemic that kept many Americans home for months, 173 people were murdered in Metro Louisville.

So far this year, there have been 66 homicides.

“Back in the day, you’d have a fight,” says Metro Louisville Mayor Greg Fischer. “Now somebody just pulls out a gun and wastes somebody and lives are changed tragically forever.”

For UofL Health trauma surgeon Dr. Keith Miller, those tragedies go beyond those who are killed.

The collateral damage often extends to Louisville’s youngest residents – the children exposed to this violence.

“They don’t get directly hit by bullets, but they hear the gunfire, and on unfortunate occasions, stray bullets might hit their houses,” says community activist Christopher 2X. “They’re impacted by the trauma of gunplay constantly.”

To protect his other children from stray bullets, Navada Gwynn says he won’t allow them to sit on a couch or sleep in a bed that’s near a window or along an outside wall.

“I’m trying to be more safe than sorry,” he says.

Conditions That Lead to Violence

Fischer says the surge in violent crime impacting Louisville and other medium and large cities across America started last summer. He says law enforcement officers were taken from their normal beats to control mass demonstrations that occurred following the deaths of George Floyd and Breonna Taylor at the hands of police. He also says the COVID-19 pandemic closed many community centers and social service organizations that provide support and positive influences to inner-city youth.

Many of the homicides and shootings in Jefferson County involve young African American males as victims or as perpetrators and occur in the predominately Black neighborhoods of West Louisville.

“We have this concentrated area that has the social conditions that make violence more likely,” says Monique Williams, director of Metro Louisville’s Office for Safe and Healthy Neighborhoods.”

Those conditions include high rates of transiency among residents, and large numbers of unkempt, vacant, or abandoned properties. Fischer adds that poverty and easy access to firearms make for a deadly combination in these neighborhoods.

But contrary to what many people believe, high-crime neighborhoods aren’t necessarily filled with criminals.

“Very, very few people in what outsiders think of as dangerous communities are in fact dangerous,” says David Kennedy, criminologist and director of National Network for Safe Communities at John Jay College in New York. “The community has very small numbers of very active groups of mostly young and young-adult men who are at fantastically high risk – they mostly hurt each other.”

Because much of this violence occurs between small groups, Kennedy says simply arresting one shooter won’t eliminate the group dynamics that contribute to violent acts or the lingering vendettas that will arise from it.

Based on that knowledge, Kennedy pioneered an approach called Group Violence Intervention (GVI) that deploys community members who have first-hand knowledge of the impacts of violence to deliver anti-violence messages to known members of violent groups. Kennedy says people like the parents of Christian Gwynn carry more moral authority to speak on violence than do police officers or clergy.

The strategy also uses law enforcement to notify group members about the consequences they will face for continued violent activity, and social service agencies to provide follow-up supports to help those members who truly want to change the course of their lives.

GVI breaks with usual tough-on-crime policies of locking-up perpetrators. Instead, Kennedy says the goal is to keep those at-risk of committing violent acts safe, alive, and free.

“It is not possible to reduce the violence in Louisville or anywhere else without making these very high-risk people safe,” says Kennedy. “When we get it right, it can have a rapid, really profound impact… It will often cut arrests in half in a few years city-wide.”

Kennedy piloted the model in Boston in 1996, where it resulted in a 63 percent decrease in youth homicides within a year. GVI has also been implemented in Cincinnati, which saw a 41 percent decline in group-involved homicides, and in Indianapolis, which experienced a 34 percent reduction in homicides.

“This is not a pilot project, this is not an experiment…This works in saving lives,” says Coleman who was still a federal prosecutor when worked with Mayor Fischer to bring GVI to Louisville last fall.

Initial funding of about $700,000 is coming from the city and from local businesses and private donations, according to Fischer. His proposed city budget for the new fiscal year also includes an increase in funding from $5 million to $20 million for violence intervention and prevention efforts. At the same time, Fischer has kept Louisville Metro Police Department funding flat at $180 million.

LMPD Deputy Chief Jacquelyn Gwinn-Villaroel says officers are embracing these changes and the community partnerships they seek to foster.

“We cannot work in silos any longer because we are seeing our young men dying at an alarming rate,” she says. “LMPD is on board and we supporting that because we must turn the corner in making sure that we get these guns off the street, but also to take an opportunity to… help change the lives of those individuals that want the opportunity to change.”

Although new to Louisville, Gwinn-Villaroel says she’s already working to build more positive relationships with West Louisville residents who feel that they are over-policed but under-protected. She says law enforcement must look at the “human needs of our community.”

GVI does have its detractors who argue it doesn’t do enough to address police reform, drug addiction, or other issues. Coleman says it’s not meant to tackle those very important but longer-term problems.

After being implemented in Boston in the late 1990s, the GVI program known there as Operation Ceasefire made such dramatic reductions in youth homicides so quickly, it was dubbed the “Boston Miracle.” But a few years later, the program was all but eliminated by city leaders and homicides spiked once again.

“These things are sustained when elected and appointed officials do the work that are needed to sustain them,” says Kennedy. “If they want to do them, if they care enough about them, and part of that is communities demanding that they do their work in this way, then these things will be sustained.”

Although Fischer has great hopes for GVI and other violence prevention initiatives underway in Louisville, he warns they won’t be a panacea.

“GVI is an important program and it’s going to help us, but until the country really takes on these deeper issues around poverty, around gun safety, you’re going to continue to have problems associated with violent crime.”

Krista Gwynn says she hopes the city will invest more in West-End neighborhoods so the children there can have constructive and productive activities to occupy them.

“I understand funding is limited but you need to sit down and realize if I don’t fix this, it’s going to get worse,” says Gwynn. “These kids are killing each other and right now that should be [the] precedent.”

Christopher 2X contends those kinds of investments are critical for West Louisville because he says every community needs to have safe spaces where youth can thrive away from the constant threat of violence.

“If we can’t try to rally around the kids that are being impacted… then what are we doing?” says 2X. “We cannot allow kids to be traumatized the way they are and not care.” 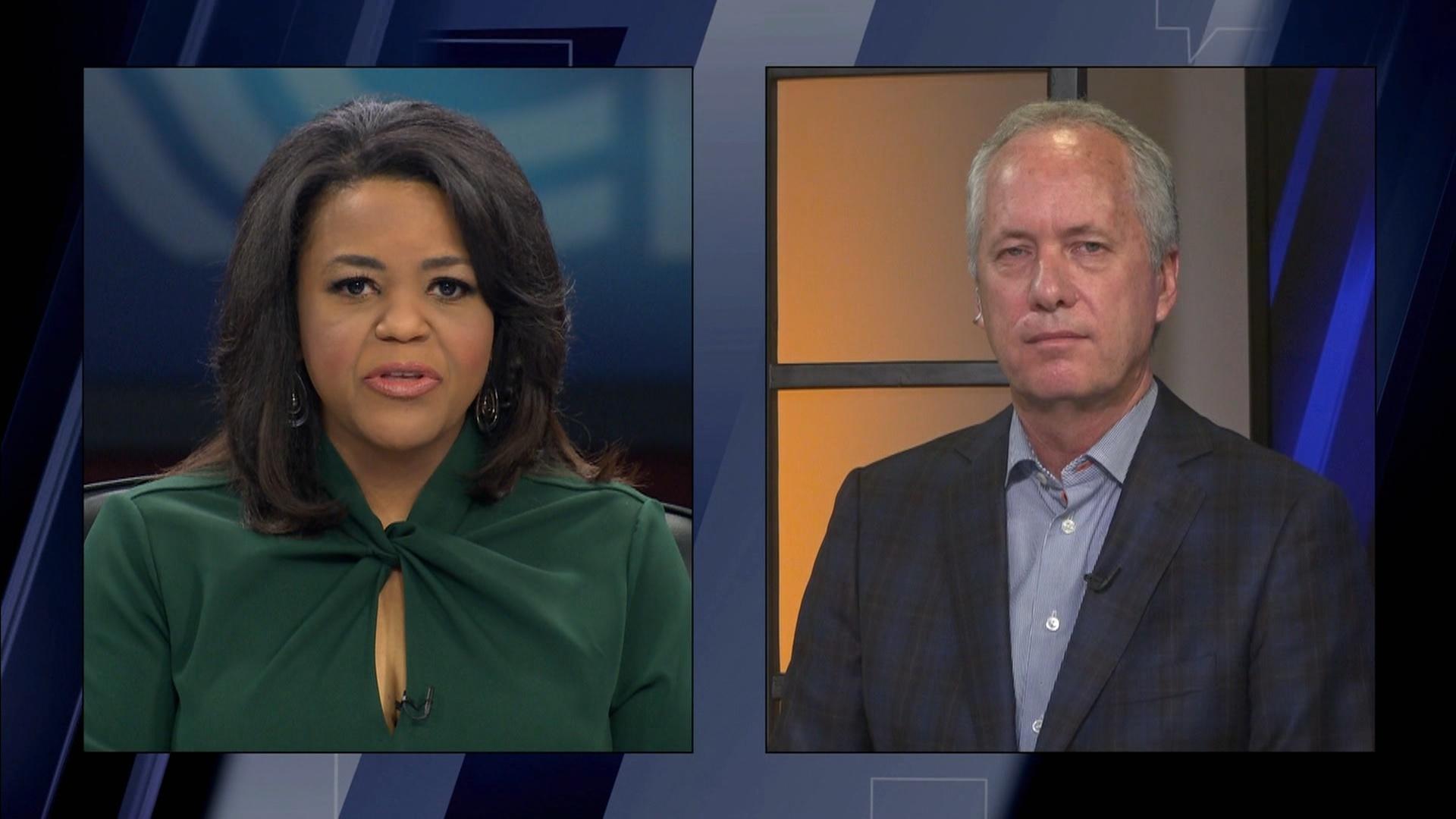