This forum honors the service and sacrifice of Kentucky's veterans and their families.
Season 1 Episode 21 Length 56:33 Premiere: 11/21/22

There are more than 267,000 military veterans living in Kentucky, men and women who served this country from World War II to the conflicts in the Middle East.

The transition back to civilian life can be challenging, especially for those who deployed to distant lands for lengthy periods, or who suffered physical or psychological wounds, says retired U.S. Air Force Senior Master Sgt. Brian Engle, who is chair of Lexington Commission on Veterans’ Affairs.

“We have to reconnect them to their home, to work, to family, to the community in general, and sometimes that’s difficult,” he explains.

Dozens of federal, state, and local agencies as well as private organizations and veteran’s groups provide a range of services to veterans – from health care and job placement to mental health counseling and housing.

The Veterans of Foreign Wars is the oldest Congressionally chartered veteran’s organization in the country, dating back to 1899, according to VFW Bluegrass Post 680 Quartermaster Nicole Horseman. Through its history the VFW advocated for the creation of the Veterans Administration and for legislation that became known as the GI Bill. There are 81 VFW posts in Kentucky and some 6,000 posts around the world.

Horseman, who served as a construction mechanic petty officer 2nd class in the U.S. Navy Seabees, says every post has a service officer who helps veterans and their spouses apply for the benefits they have earned.

“Thus far this year, we have been able to recover $15 million in benefits to Kentucky veterans from the VA,” says Horseman.

When Army combat veteran Jeremy Harrell returned home from his service in Operation Iraqi Freedom, he saw first-hand the obstacles service members face in re-entering civilian life. That’s what prompted him to create a non-profit organization specifically focused on providing veterans in central Kentucky a place of connection, healing, and recovery.

“Five years ago this month… we decided to start Veterans Club Inc.” says Harrell. “Now we serve around 7,000 veterans that we know of directly.”

Research indicates that female veterans are twice as likely than men to develop PTSD. They are also two to three times more likely to be homeless than any other group of American adults.

The Winchester organization Lady Veterans Connect provides housing and other supports to women leaving the service, especially those who endured military sexual trauma. Founder and Executive Director Phyllis Abbott says she thought that with more women entering the military, her organization would primarily serve veterans between 35 and 45 years of age. Instead, she says their youngest client is 48 years old, and the oldest is 73.

“So it’s really reaching those senior, 50+ women veterans out there that have been rejected or don’t feel like they’re comfortable someplace,” says Abbott.

Because homelessness is such a problem among female vets, LVC provides transitional housing in Winchester for up to 32 women.

Other Service Providers Around the State

Other groups that help Kentucky’s veterans include the Salvation Army, the Healing Place in Louisville, the Rescue Mission in Lexington, Revive Ministries in Nicholasville, and the Veterans Center in Richmond. Organizations that focus on substance use recovery and mental health services include Life in Motion in Louisville and Isaiah’s House, which has treatment facilities in six central Kentucky communities.

“Camaraderie saves lives,” says Horseman. “Being able to go to a safe, non-judgmental place with people who understand what you’ve been through – bootcamp, combat, serving away from your family – it is vital.”

Health care is available through VA medical centers in Louisville and Lexington, and through long-term care facilities in Hazard, Radcliff, and Wilmore as well as in Hanson in Hopkins County. Officials recently broke ground for a new long-term care center that will be built in Bowling Green.

“It’s been city, it’s been state, it’s been the federal delegation, everybody has marched to the beat of the same drum on this and worked together,” says state Rep. Michael Meredith (R-Oakland).

The project is the result of years of lobbying by two area veterans, Ray Biggerstaff and Robert Spiller, according to Meredith. The $50 million facility will have 60 beds and serve veterans in 17 south-central and western Kentucky counties. Some 7,000 former service members live in Warren County alone.

“It will be a great asset to our community,” says Army veteran and AMVETS Post 130 Commander Gerald Mounce. “It will help all of us veterans out, it will be a place where we can go and enjoy each other’s company.”

“We are fulfilling our obligation to our veterans,” says Gov. Andy Beshear. “They have sacrificed for us, and the least we can do is take care of them with the best, state-of-the-art health care and facilities.”

Although the four current long-term care centers are not full, they do have waiting lists, according to Abbott. She says the issue is availability of staff to operate the facilities.

While veterans can seek medical care from any provider, Harrell says they generally prefer facilities that specialize in working with former service members, even if that means travelling a long way from family.

“We’re used to distances and being away from home,” says Harrell. “It’s the comfort of being around like-minded folks who understand, and even the staff has some sense of military culture.”

New Benefits Available to Certain Veterans Under the PACT Act

In August, Congress passed the Honoring our Promise to Address Comprehensive Toxics Act to provide health care and other benefits to veterans exposed to toxic burn pits in the Middle East conflicts, Agent Orange in the Vietnam War, and polluted water at Camp Lejeune, N.C. Rather than forcing veterans to prove that their poor health was caused by toxic exposures, the PACT Act automatically covers 23 different ailments presumed to be the result of military service.

Marine Corps veteran Brian Amburgey of Winchester joined with other veterans to lobby Congress for the special coverage. He was stationed at Camp LeJeune in the 1980s, and he was among a group of vets invited by senators to witness the bill’s final passage this summer.

“It was like a dream, sitting there being able to watch and hear that final vote, seeing the smiles, seeing everybody rejoice and the tears,” Amburgey says. “Then the next night getting the invitation from President Biden to be at the White House for the signing still puts chill bumps on me.”

Since passage of the PACT Act, law firms have rushed to solicit clients exposed to water supplies at Camp Lejeune. But Horseman cautions veterans about signing on with such attorneys to secure benefits under the legislation. While going through a law firm may mean a vet receives their payments faster than filing their own claim, she says those attorneys will keep upwards of 40 percent of the payout to cover their fees.

About 3.5 million post-9/11 combat veterans were exposed to dangerous chemicals during their service. Harrell, who lived next to a burn pit in Iraq for over 400 days, says he has developed a range of respiratory problems in recent years, including asthma and chronic bronchitis. He says it will be critical for veterans and their families to continue to push lawmakers to add other conditions to the list of ailments covered under the PACT Act.

Amburgey says this compensation is long overdue for those veterans who have struggled for years with health problems caused by military environmental exposures and federal bureaucracies reluctant to accept responsibility.

“We’ll never get an apology from the government, but this is the first step of getting justice,” says Amburgey.

Honoring Men and Women Who Serve

Honor Flight is a national, non-profit organization that takes veterans from across the country on day-long, all-expenses-paid trips to see the various war memorials around Washington, D.C. A recent journey hosted by Honor Flight Kentucky took 134 local women on the group’s first all-female flight to the nation’s capital.

“It’d never been done before in Kentucky,” says Ashley Bruggeman, flight director of Honor Flight Kentucky. “Women deserved that special event to bond with each other in this multi-generational trip to honor their service.”

In Washington, the group toured the Military Women’s Memorial at Arlington National Cemetery and witnessed a changing of the guard at the Tomb of the Unknown Soldier. From there they visited the Lincoln Memorial as well as the World War II, Korean War, and Vietnam War Memorials. They participated in a wreath-laying ceremony at the Vietnam Women’s Memorial, and saw a 21-gun salute at the Iwo Jima Memorial.

“It’s been the most amazing, well-planned, thoughtful day ever,” says Linda Cunningham, an Army veteran and certified financial social worker in Lexington. “I’ve been able to spend it amongst all these amazing women with their own amazing stories.”

When the veterans arrived back at Lexington’s Blue Grass airport late that June night, they were greeted by hundreds of well-wishers who applauded the women and thanked them for their service. Reflecting on the trip, Horseman says she was thrilled to spend the day with women vets who paved the way for her own time in the military. With more attention usually given to male veterans, Abbott says it’s time women vets get their due.

Various branches of the U.S. armed forces have struggled recently to meet their recruiting goals. Horseman and Harrell say that’s not uncommon after major conflicts like Vietnam or the War on Terror. Both say their organizations encourage veterans to talk with school groups about the importance of military service and what life is like for men and women on active duty.

That connection between the nation’s veterans and younger generations is important, according to the panel. Brian Engle, a Harlan native and Vietnam veteran who was an Air Force recruiter for several years, says Americans should recognize those men and women in their communities who have served in the military.

“There’s a principle and a spirit of service to our country and we should honor that endlessly and emphatically,” says Engle. “Whatever the years of service, whatever the conflict... we should equally honor those veterans who served.”

Renee Shaw hosts a town hall-style discussion about how Kentucky cities and counties are strengthening communities through economic development. 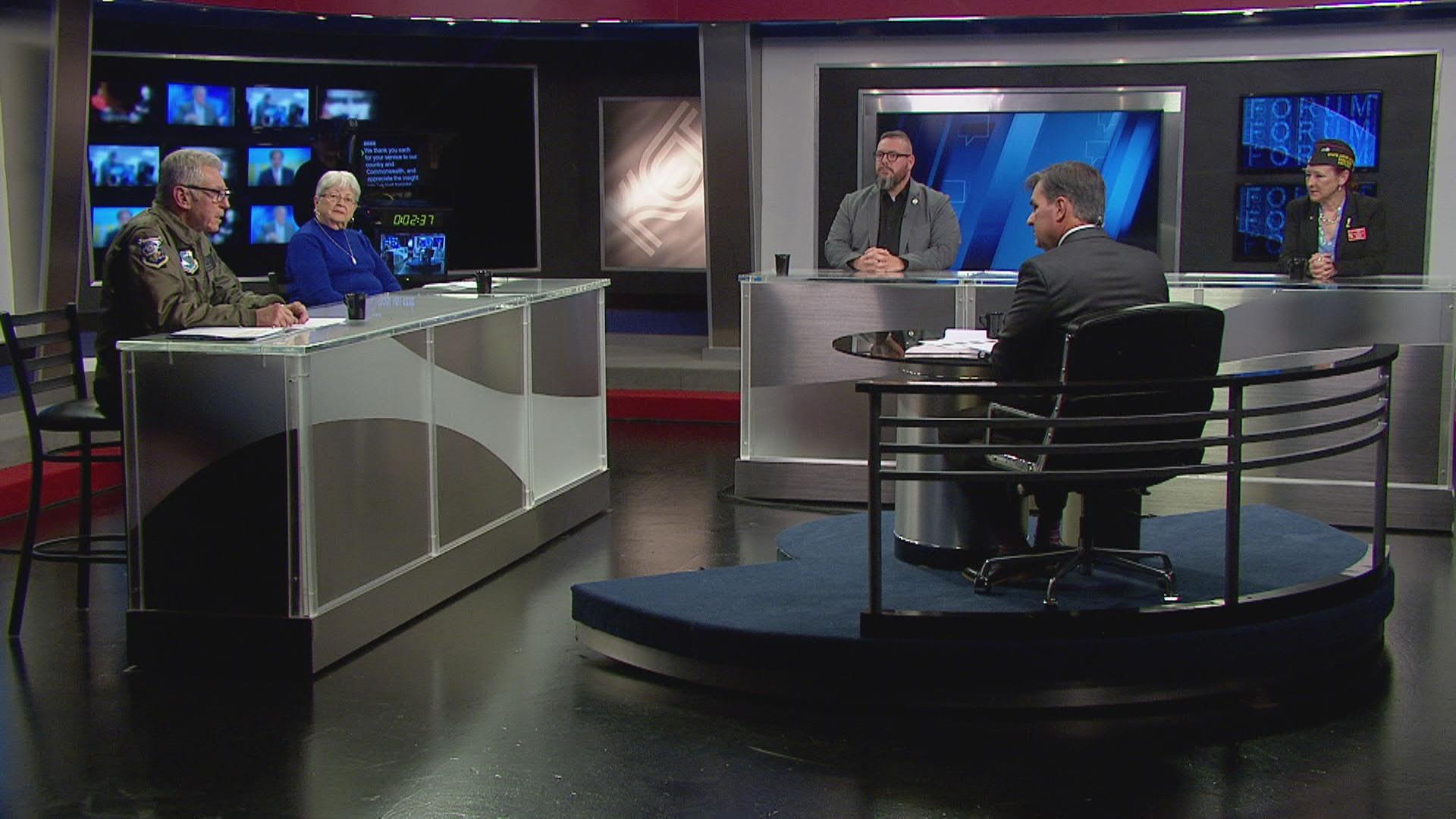