A Prescription for Health

According to the Centers for Disease Control, in 2017 Kentucky remained high among states in three leading causes of death, ranking first in deaths from cancer and chronic lower respiratory disease and ninth in deaths from heart disease. These diseases have long had a detrimental effect on public health in commonwealth, resulting from poor lifestyle habits among Kentucky citizens, lack of citizens’ access to health care, and scarce financial resources to pay for care, among other factors.

In September, KET conducted its latest health forum at the annual meeting of the Kentucky Medical Association in Louisville. Produced with KMA and hosted by Renee Shaw, the Prescription for Health Forum examined three major public health issues in Kentucky – smoking, Type 2 diabetes, and substance abuse – and touched on other current topics in health care.

The forum featured a four-person panel as well as several comments from physicians and public health professionals in the audience. The panel consisted of: Dr. Bruce Scott, MD, an ear, nose and throat physician and president of KMA; Dr. Monalisa Tailor, MD, an internal medicine physician; Allison Adams, director of the Buffalo Trace Department of Public Health and president of the Kentucky Health Department Association; and State Rep. Kim Moser (R-Taylor Mill), chair of the House Health and Family Services Committee.

Scott opened the discussion by reviewing the poor health indicators for Kentucky mentioned above, and he also mentioned the high smoking rates in the commonwealth – almost double the national average – and the ongoing opioid crisis. “As a result, Kentuckians live sicker and die younger,” he said. “These aren’t just statistics for us, these are our patients.”

According to the Centers for Disease Control, 46.1 percent of the U.S. population has diabetes (either Type 1 or, more commonly, Type 2) or prediabetes.

Dr. Fred Williams, MD, an endocrinologist, diabetes and metabolism specialist, spoke from the audience and said that when he began practicing in 1983, only 4 percent of Kentuckians were diagnosed with diabetes and about 20 percent with prediabetes (where blood sugar levels are elevated but not high enough to be diagnosed as Type 2 diabetes). Now, he said 14 percent of patients in Kentucky are diagnosed with diabetes, and over 1 out of 3 with prediabetes. Williams said that along with the higher rates of diagnosis, costs for drugs to treat diabetes have increased substantially, creating a pressing public health crisis in Kentucky and elsewhere in the U.S.

“The solution for this is not simple, otherwise we would have implemented something by now,” Williams said. “I think that the final solution is going to come from a variety of different areas, probably simultaneously.”

According to Williams, reducing diabetes in Kentucky will require the following steps:

“I think that solving the access issue and solving the affordability issue, in my opinion, is going to require a fairly major change in the whole health care system in this country,” Williams said.

“It’s programs like the DPP that can really move a patient from thinking about changing to actually doing,” Adams said. “It’s the comprehensive package, because if you have a friend that wants to walk to and you meet them at the DPP and other evidence-based programs at the health department, you start to understand that you’re not in this alone.”

According to data from the Campaign for Tobacco-Free Kids, 24 percent of Kentuckians smoke, compared to 14 percent nationally. That’s the second-highest rate in the U.S. Dr. Tailor said that many of her patients that smoke have never really thought about why they took up, and maintain, the habit.

“Eventually they’ll come up with an answer,” Tailor said. “‘I’ve always done it.’ ‘It’s a stress reliever.’ ‘It’s how I get a break at work.’ But they’ve never thought about whether they could do something else to relieve their stress rather than pick up a cigarette.”

Options for smokers looking to quit are plentiful in Kentucky, and increased efforts are being made by public health organizations, physicians, and the state Health and Family Services Department to promote them and educate the public. Adams mentioned the Freedom From Smoking classes offered at some health departments, developed by the American Lung Association, that offers group support led by a trained facilitator.

“And then, the Quit Line is a pretty awesome program, with a counselor on the other line 24 hours a day,” she added. “So if you can’t find the time to go somewhere to actually participate in the group, you have a counselor.”

Ben Chandler, chief executive officer for Foundation for a Healthy Kentucky, and Dr. Patricia Purcell, a pediatrician, commented from the audience about addressing the significant rise in e-cigarette use among young people. E-cigarettes entered the U.S. market in 2007-08, Purcell said, which means that long-term research into their health effects is still lacking – and a recent spate of illnesses related to vaping, including pulmonary disease, has made national headlines.

“What I can tell you is that anyone who Juuls, who vapes, who uses an electronic nicotine delivery system device, is inhaling chemicals that have not been sufficiently studied,” Purcell said. “And we’re seeing the ramifications of that.”

Chandler said that Foundation for a Healthy Kentucky and other health organizations will be lobbying the 2020 Kentucky General Assembly to tax e-cigarettes at the rate of traditional tobacco cigarettes, and noted that Rep. Moser has already co-sponsored a bill adding this tax which will be introduced during the upcoming session. He also called for a ban on e-cigarette flavorings in Kentucky and, on the national level, for legislation that will raise the age to purchase tobacco to 21.

“It’s the use of these products by young people that we’re particularly concerned about,” Chandler said. “In fact, almost 80 percent of all usage of electronic cigarettes is by young people under the age of 18.”

The opioid crisis in Kentucky has continued to ravage families and communities since the late 1990s, but 2018 brought some positive, yet still sobering, news: according to the Kentucky Office of Drug Control Policy, overdose deaths declined in the commonwealth by 15 percent, from 1,566 the year before to 1,333.

Scott says that efforts to educate physicians about the proper prescription protocol for opioids are having an effect – opioid prescriptions are down, and the number of physicians using drug monitoring programs that were introduced in 2013 as part of state legislation are up. And community awareness is much more widespread. “The patients who come into my office now have a totally different attitude about the request for pain medication for after their tonsillectomy or their nasal surgery,” he said. “So the message is getting out. But we still have a major problem in our state, because we don’t have enough treatment opportunities for the patients who need it.”

Russell Coleman, U.S. Attorney for the Western District of Kentucky, and Dr. Philip Chang, chief medical officer for UK Healthcare, offered perspectives from the audience in the areas of law enforcement and pain treatment, respectively. Coleman said that his department’s mission is to pursue physicians who excessively, and criminally, over-prescribe opioids to patients rather than the overwhelming number of doctors who are responsible and ethical.

Chang discussed programs introduced at UK HealthCare that have transformed how pain management is administered by physicians, nurses, and staff. Chang and his team began by educating medical providers, and then moved to inform patients. They let patients know that pain can be treated by many other ways – pharmacologic and non-pharmacologic – apart from opioids. The overall effect has been to implement a new process for treating pain that ends with opioids rather than begins with them.

Chang explained that his staff is upfront with patients, letting them know that pain is a part of their specific illness or injury and is to be expected. “Our goal together is to design a tailored, just for you, pain regimen so that you can participate in physical activities and rehabilitation,” he said. “Patient engagement, believe it or not, has actually gone up. They want to talk to us about their pain.”

“If I were to write a prescription for health for patients, it would have two parts,” Sutton said. “First, find a doctor who listens to you and answers your questions. Being heard and having your questions answered is an important part of educating yourself about your own health. The second portion of your prescription would be to come to your doctor visits open and willing to share.”

A question-and-answer session between panelists and members of the audience followed KET’s forum – available below. 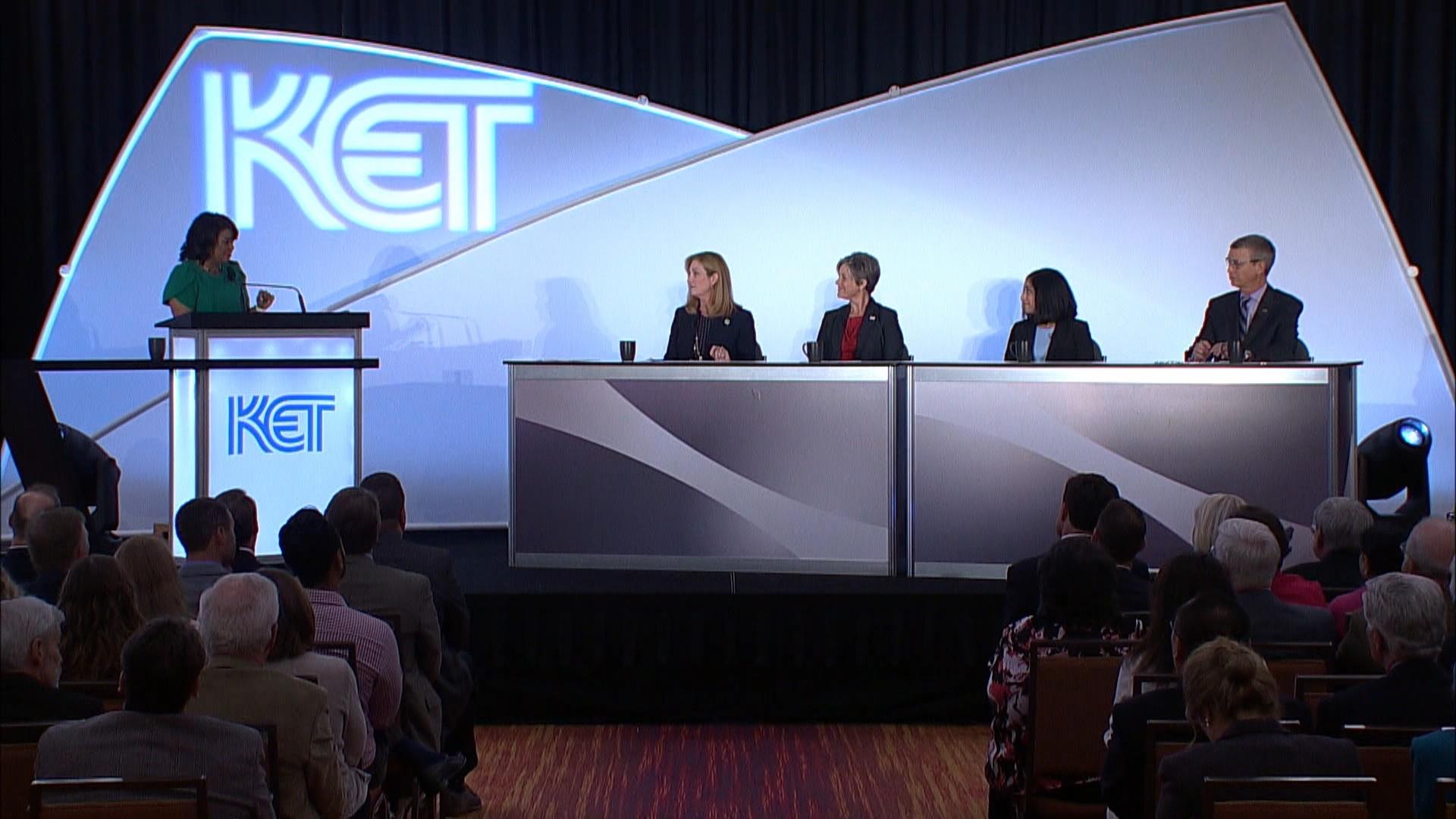