Students from all 50 states travel to Lexington, Kentucky to learn the value of compromise, bipartisanship and policy making.
Length 28:50 Premiere: 09/12/17

Lessons in Compromise
“This is a picture of what policy making in its ideal state could look like,” says Madison McCauley, a student from Texas Christian University who participated in the 2017 Henry Clay Center for Statesmanship’s Student Congress. “We’re all college students and we’re all about to start our careers in the real world, so hopefully this is a true reflection of what the future could be.”

Kentucky statesman Henry Clay was known as The Great Compromiser, and it’s the spirit of productive conversation between differing viewpoints that drives the annual Henry Clay Student Congress, held at Transylvania University in Lexington.

“We bring 50 students, one from each state, every year for a week to study the ideals of Henry Clay: compromise; reconciliation; bipartisanship,” explains Robert Clay, Co-Chair of The Henry Clay Center for Statesmanship. “They’re coming from different perspectives, different regions, different educational backgrounds. There’s natural diversity in these groups. We don’t force it, we just let it happen, and it’s amazing. They learn from each other that there are other ways to look at things.”

The students were assigned to work on creating policy for one of four topics: transportation, foreign policy, budget, and health care. Within those topic areas, the students split into two subgroups to represent conservative and progressive viewpoints. Ultimately the two sides meet to create a single policy proposal for their assigned topic, which they would present to their fellow students and a panel of judges at the end of the week.

In some cases, students had to create policy that ran counter to their existing opinions. This was the experience Aferba Ashong, a student from New Jersey’s Rutgers University, had when the left-leaning students outnumbered conservatives in the health care policy group.

“I looked at it as a learning opportunity for me, because I’m not always going to be able to argue the side that I want to argue,” says Ashong. “After the first night, I had to go and research Republican [health care] plans. I had to listen to the Republican floor debate and some of the statements that Republican officials had put out just to orient myself to their mindset. It made me understand their rationale, how conservatives think, more than what I just see on Fox News or other media outlets.”

Humanizing the Other Side
For many of the participants, simply getting to know other students who came into the program with different perspectives was a huge learning experience.

“I got to talk to real conservatives and understand where they’re coming from,” says Ashong. “Seeing people with different perspectives made those ideals and perspectives reality for me.”

“It’s so easy to get in these echo chambers where you surround yourself with people who think just like you,” says Noah Barbieri, a student from Millsaps College in Mississippi. “I’ve not done the best job of surrounding myself with people who challenge me on my views and I really think I’ve gotten a perspective of that this week.”

Corey Cowan, an Indiana native who attends school at the University of Aberdeen in the United Kingdom, emphasized that relationships fostered outside of the policy-making exercises were helpful in forging meaningful compromise later on.

“Going to social events definitely built relationships,” says Cowan. “By a couple of hours into the first evening, you kind of forgot who was conservative and who was liberal…It was interesting to develop those personal relationships, and those relationships definitely got tested when it came time to develop a compromise. But I think they were constructive.”

Creating Compromise
For Brian Anderson, a student from Western Kentucky University, focusing on the issues was a key to building a policy that the two sides could agree on.

“The biggest lesson about how to get past partisanship and gridlock is to focus on the issue you’re presented with,” says Anderson, adding that knowing someone’s stance on a hot-button issue should not come into play when working to find common ground on an unrelated topic.

“I don’t think it’s hard to compromise with people that are willing to compromise,” says Egeburg. “I know actual politicians have much more at stake. But if [both sides] have the best interests in mind, then it’s a lot easier than what you’d think.”

However, the students agree that it’s challenging to create compromise, and not always satisfying.

“Compromise is not an easy thing,” says McCauley. “I think that’s why—with healthcare particularly—the Congress we have in the real world has not yet found a solution. They really encouraged us in our original groups to stick to our values and not worry about coming to the middle until we all met, so having to do that once we all met together was challenging.”

“We could see how difficult it was to actually compromise, because neither side wanted to give up what they initially put in their policy,” adds Ashong.

Many of the participants in the Student Congress aspire to careers in politics, and the challenge of finding middle ground on the issues gave them a preview of what that might be like.

“Compromise…does make me feel like I’ve lost something,” says Anderson. “But that’s a feeling that you have to be willing to have if you’re going to be a public leader. You’re not going to get everything you want, but as long as you get some of what you want, you’re doing a good job for your constituents.”

Building Leaders
In addition to hands-on experience writing policy, the students had the opportunity to meet with politicians and community leaders to inspire them in their continued path toward a future of public service. The week kicked off with a speech by Kentucky Representative Andy Barr. The program also included a reception at Three Chimneys Farm with a keynote address by former Lieutenant Governor Crit Luallen.

“It was cool to meet so many different people at that reception,” says Cowan. “I sat next to academics, business people, community leaders, and other students here at the center. It was rewarding to talk to people who are successful in their fields and learn what they think is important.”

The students left with a new understanding of the hard work that goes into creating effective policy, along with some inspiration for the future.

“I’m very excited about this group of leaders,” says Egeburg. “This is such a great group of educated young people who have so much drive and motivation to make a change.”

“They all leave here with an enthusiasm about the future of the country,” says Co-Chair Robert Clay. “They don’t go away with a pessimistic attitude as many of us sometimes have watching what’s going on in D.C. They come across as optimistic, hopeful, enthusiastic, very bright. I do think they’ll have an influence on the dialogue in this country, and who knows? Maybe one of them will be president of the United States someday.”

About Lessons in Compromise: The Henry Clay Student Congress

The Henry Clay Center for Statesmanship hosts their annual Henry Clay Student Congress. Students from all 50 states travel to Lexington, Kentucky to learn the value of compromise, bipartisanship, and policy making. Students describe their week in Kentucky and the lessons they learned.

Students from all 50 states travel to Lexington, Kentucky to learn the value of compromise, bipartisanship and policy making. 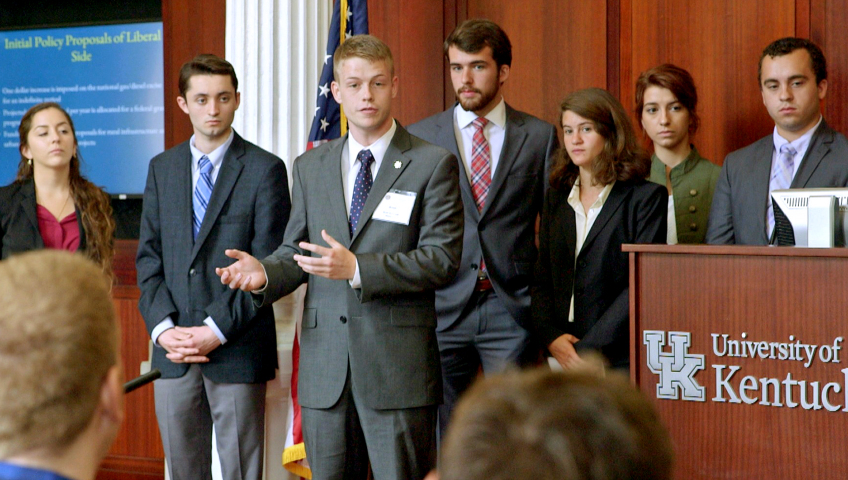