Frederick Law Olmsted designed Central Park in New York City and hundreds of parks nationwide, but you can find what's been called the defining park system of his career in Louisville. Composed of 18 parks and six parkways, Louisville's Olmsted Park system is not only pastoral and full of activities, it brims with historical links and footnotes. Jackie Hays, a veteran broadcaster in Louisville, narrates this special.
Length 28:33 Premiere: 9.21.15

Olmsted’s ‘Parks for the People’

Some consider his crowning achievement to be the 18-park Olmsted Parks System in Louisville. It is one of the Derby City’s most cherished resources, and has been an integral part of the city’s natural, economic, and social life for more than a century. The system is the focus of “Louisville’s Olmsted Parks,” a KET documentary narrated by veteran Louisville broadcaster Jackie Hays.

Creating a Final Masterwork
Olmsted was commissioned by a far-sighted group of Louisville civic leaders in 1891 to create a connected urban park system. Already renowned for his talent and ingenuity, the Connecticut native was drawn to Louisville as it provided an opportunity to design a park system in the South. This would be the last public project of his career.

Eric Burnette’s book “Parks for the People! Frederick Law Olmsted in Louisville” tells how the system was devised and implemented during the turn of the 20th century. [Burnette was interviewed for the documentary.] Although the motives of the Louisville park commissioners were not always thoroughly civic-minded, and often, in fact,  pitted landowners against one another in pursuit of profit, the end result was arguably the most complex and naturally diverse urban park system in the country.

Olmsted’s genius is on display in the four parks he designed as well as in the six tree-lined parkways that connect the system. In addition to the small neighborhood Boone Square Park, Olmsted designed what Louisville park aficionados refer to as the “Big Three” – Cherokee Park in East Louisville, Iroquois Park in Southwest Louisville, and Shawnee Park in West Louisville on the banks of the Ohio River.

Olmsted retired in 1895 and died in 1903. His sons, John Charles and Frederick Law Olmsted Jr., oversaw the design of the system’s remaining 14 parks, including the large, recreation-oriented Seneca Park in East Louisville and history-rich Chickasaw Park in West Louisville. Chickasaw Park was the only park in the Olmsted system open to African-Americans from 1924-1954, and has been ‘adopted’ by the black community in the West End ever since.

An Artist at One With Nature
Park visitors can still experience the subtlety of Olmsted’s talent when exploring the pastoral, rolling hills and secluded wooded areas of Cherokee Park and its Beargrass Creek. They can revel in it when hiking to the top of the rugged knob of Iroquois Park to take in panoramic views, and when strolling along the Ohio River bank at Shawnee Park.

An ecologist before his time, Olmsted strove to work as much as possible with the existing landscape contours of each park, and he altered them only when necessary to make the area more inviting to the public.

“What Frederick Law Olmsted really wanted to do was to create a space where people could forget where they were [in the city],” author Burnette says. “He thought parks were soothing and had a therapeutic effect. So he really wanted to create spaces that fostered quiet contemplation and reflection, and interaction with nature.”

Preserving a Civic Treasure
During the 20th century, the parks system became intertwined with Louisville’s growth into a modern metropolis and a major economic hub. Generations of Louisvillians grew up experiencing the parks, and the parks’ influence on civic life was broad and deep. As Louisville’s population grew, the parks evolved to incorporate recreational activities while still maintaining Olmsted’s vision of a more solitary, relaxed experience.

By the mid-20th century, the parks had become so ingrained in Louisville’s daily life that city’s government and civic associations began to take them for granted. During the 1960s, Interstate 64 was constructed through both Cherokee and Seneca Parks in the East End.

Several years after that, most of the trees in Cherokee Park and along Eastern Parkway were destroyed during the April 1974 tornado outbreak that encompassed the Midwest. As reconstruction of Cherokee Park commenced, a group of civic-minded Louisvillians started to organize with the goal of preserving and promoting the parks system.

This led to the establishment of the Olmsted Parks Conservancy in 1989. The nonprofit, labeled a “world-class organization from the high-thinking level to the day-to-day level of promoting citizenship” by Louisville Mayor Greg Fischer, has become a national leader in urban landscape preservation.

A dedicated staff along with crucial volunteer support help to both maintain and enhance the 18-park system, according to Zinniel. Their work is focused on preservation, maintaining the system’s diverse ecology, and public education and engagement.

According to Burnette, Louisville’s restoration of the Olmsted Parks System during the last 25 years has spurred civic engagement on other major landscape projects, such as the city’s heavily-attended Waterfront Park. Due to the efforts of the conservancy and other committed citizens, Olmsted’s living works of art will likely continue to engage and inspire Louisville’s residents throughout  the 21st century and beyond.

Frederick Law Olmsted designed Central Park in New York City and hundreds of parks nationwide, but you can find what's been called the defining park system of his career in Louisville. Composed of 18 parks and six parkways, Louisville's Olmsted Park system is not only pastoral and full of activities, it brims with historical links and footnotes. Jackie Hays, a veteran broadcaster in Louisville, narrates this special. 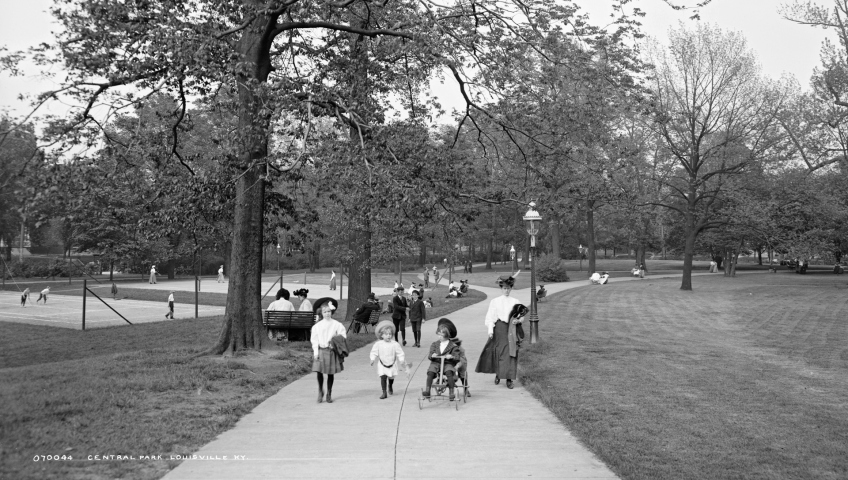