Bill speaks with Republican gubernatorial candidate Matt Bevin about his background, the upcoming election, and his vision for Kentucky.
S1 E1 Length 27:34 Premiere: 10.25.15

As a boy in northern New Hampshire, Matt Bevin dreamed of a life bigger than his small-town upbringing. He loved to read biographies of famous people, stories that pointed him to a wider world. For his high school yearbook quote, Bevin selected a stanza from poet Henry Wadsworth Longfellow that summed up his aspirations:

Lives of great men all remind us
We can make our lives sublime,
And, departing, leave behind us
Footprints on the sands of time.

From his New England roots, Bevin became a successful businessman and the Republican nominee for governor of Kentucky. He discussed his life, his leadership style, and his dreams for the commonwealth on KET’s One to One.

Family Values and Leadership Lessons
Bevin was born in Denver but raised in Shelburne, N.H., a small farming community near the Maine border. He embraced the work ethic and Christian values his parents instilled in him, but it wasn’t an easy childhood. He and his five siblings lived what Bevin calls a simple life: The family read books borrowed from the town hall library, raised much of what they ate, and chopped wood for the fireplaces that heated their farmhouse.

“I chose not to live that way the rest of my life… but I’m grateful for the foundation,” Bevin says.  “When you grow up that way, you appreciate, as my dad used to say, giving an honest day’s work for an honest day’s pay.”

An ROTC scholarship took Bevin from New Hampshire to Washington and Lee University in Virginia. After graduating, Bevin did a four-year stint in the U.S. Army, eventually earning the rank of captain in an artillery unit.

Bevin says his military service gave him valuable lessons about leadership, how to execute a mission, and how to make command-level decisions. Bevin observed that too often people have responsibility for a job but aren’t given enough authority to be successful at it.

“The greatest mantra that I developed while a young officer that has served me very well in the private sector [and] it’s how I will govern,” Bevin explains, “is to be hands off as much as possible but hands on as much as necessary.”

The Lowest of Lows
While serving in the Army, Bevin met his wife, Glenna, and made his first trip to Kentucky. Once in civilian life, Bevin worked in financial services and jumped at a job opportunity that would bring him and Glenna back to the commonwealth to live. They moved to Louisville in 1999.

At work, Bevin became involved in a range of businesses from investment management to medical devices. He also added bell making to his portfolio when he took over the Connecticut bell foundry his great-great-great-grandfather started in 1832. Bevin says he now owns some or all of 10 different companies.

At home, he became the father to five daughters.

“As a parent, I’ve seen the highest highs, and the lowest lows,” Bevin says.

The worst came in 2003, when Bevin’s oldest daughter, then a high school senior, was killed in a car accident. Brittiney Bevin had a calling to be a missionary, which led the family to endow a missionary training center in her memory at the Southern Baptist Theological Seminary in Louisville.

“I came to know his heart and his concern for the gospel of Jesus Christ being taken around the world,” says SBTS President Albert Mohler of his relationship with Bevin.

Mohler says he doesn’t want to discount the work of career politicians, but he contends government needs more people like Bevin who combine corporate achievement with a deep concern for the larger society.

“Our political system will grow stale and stagnant if we do not have people who have had real success in facing challenges and problems in other arenas of life such as the business world coming into the political world and bringing those skills,” Mohler says. “That’s what I think Matt Bevin would represent.”

An Entrepreneur and a Negotiator
Bevin took his first foray into politics when he challenged U.S. Sen. Mitch McConnell in the 2014 Republican primary. Bevin was a long shot in the race against the powerful, five-term incumbent.

Unfazed by his 25-point loss to McConnell, Bevin entered this year’s Republican primary for governor, and secured the nomination with an 83-vote victory over Kentucky Agriculture Commissioner James Comer. Bevin selected another political outsider as his running mate, Bowling Green businesswoman Jenean Hampton.

“He’s an entrepreneur, and I think they’re wired differently,” Hampton says of Bevin. “They don’t see problems or obstacles, they see solutions.”

Glenna Bevin adds passion and integrity as other traits that she says will help Bevin as governor. She says their family life has also given Bevin good negotiating skills. After their daughter’s death, the Bevins had a son and adopted four children from Ethiopia.

“With nine kids you have to be good… at finding common ground,” Glenna Bevin says, “and then showing us ways we can give on each side and still be happy with the outcome.”

A Vision for the Future
Bevin says all of his life experiences will inform his leadership as governor, but he says his faith is the compass by which he lives.

“I’m looking to be a civic leader, I’m not looking to be nor am I qualified to be anybody’s spiritual or moral leader,” Bevin says. “But I’m unapologetic about the fact that my Christian faith defines my entire decision-making process as a husband, as a father, as a businessperson, and how I will govern.”

The Republican likes to quote a phrase from Proverbs that says, “Where there is no vision, the people perish.” He says he fears such a future exists for the commonwealth unless Kentuckians are inspired to become much greater versions of themselves.

“We have this ability to be something grand, to be a crown jewel in America, to be a place that attracts other people,” Bevin says. “This is my vision for us… This is part of why I’m running to be governor: I want to set us on the trajectory to make this a state that is a magnet for others to come to.”

About One to One with Bill Goodman - Gubernatorial Race

A discussion about the 2015 gubernatorial race.

Related to One to One with Bill Goodman - Gubernatorial Race 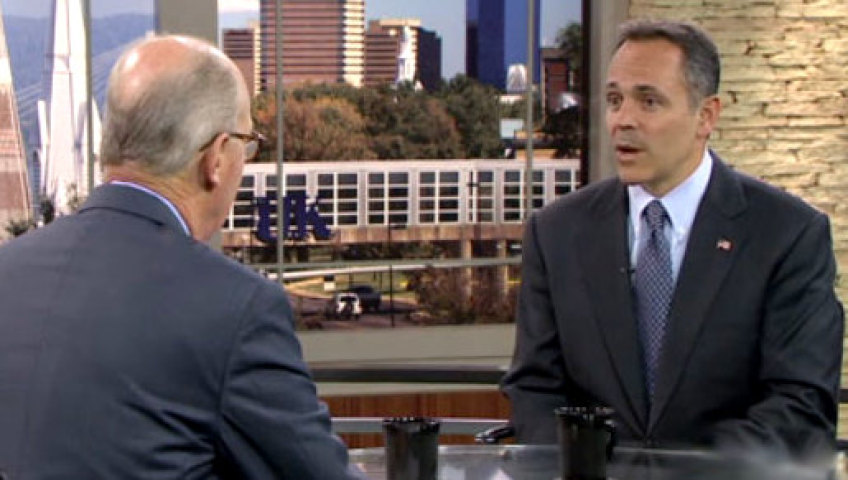