Bill sits down with Al Cross, director of the Institute for Rural Journalism and Community Issues at the University of Kentucky, a KET election night analyst, and a long-time panelist of KET's Comment on Kentucky, to discuss the 2015 May primary election.
S10 E25 Length 28:00 Premiere: 5.16.15

Kentucky has the distinction of hosting one of only three gubernatorial elections in America this year. And the Washington Post recently dubbed our contest to be the nastiest in the nation for 2015.

So how has that shaped the campaigns and what could it mean once the votes are counted Tuesday night? Cross shared his thoughts about the statewide races on Sunday’s edition of One to One on KET.

Some Lessons from History
The GOP race was rocked in recent weeks by accusations that James Comer had an abusive relationship with his college girlfriend, and that Hal Heiner’s campaign may have helped bring those allegations to public attention. As unseemly as the controversy may be, Cross says it’s not the first time Republican gubernatorial candidates have targeted each other.

“I don’t think we’ve seen this nasty and unpredictable a race in the Republican primary since 1967 when Louie B. Nunn defeated Marlow Cook,” Cross says. “That was a race in which Louie Nunn had made not-too-thinly veiled attacks on the fact that Marlow Cook, the county Judge in Jefferson County, was a Roman Catholic.”

How the current nastiness will affect the outcome of this year’s race is uncertain, but Cross says another election from history may provide some insights. He points to the 1987 Democratic gubernatorial primary in which then-Lt. Gov. Steve Beshear launched a late series of attack ads against former Gov. John Y. Brown. The battle between Brown and Beshear opened a window for Lexington businessman Wallace Wilkinson to parlay his personal fortune and pro-lottery platform into a primary election victory.

In this year’s race, Cross says it’s possible the dispute between Comer and Heiner could help Matt Bevin, another millionaire businessman, snare a surprise win.

Voter Turnout
Many have speculated the recent controversy may dampen turnout among Republican voters on Tuesday. Cross, who is director of the University of Kentucky Institute for Rural Journalism and Community Issues, again looks to history as a guide on how many Kentuckians may go to the polls this year.

In 2011 GOP primary, when state Senate President Leader David Williams had nominal opposition, Cross says turnout was only 13.2 percent. In 2007 the turnout was 20 percent as incumbent Gov. Ernie Fletcher faced a challenge from former Congresswoman Anne Northup. And the 2003 primary between Fletcher and three other candidates netted a 17.2 percent turnout.

For this year, Cross says he expect about 15 percent of Republican voters to go to the polls.  He reports that Heiner’s campaign has touted its sophisticated get-out-the-vote operation, which would be boosted by a network of religiously motivated Christians who support the Louisville real estate developer. Cross says Bevin is counting on his connections in the Tea Party, especially in northern Kentucky.  Meanwhile, Agriculture Commissioner Comer has a more traditional organization of party contacts at the county level across rural Kentucky.

And what about Will T. Scott, who is a distant fourth in the GOP field? “If he had money, he might have a chance of winning,” Cross says of the former state Supreme Court justice’s candidacy. “He’s got some pretty good radio [ads] but he has no money for TV and that is essential.”

What’s Ahead on the Democratic Side
As the Republican contenders have traveled the state making speeches and appearing at local Lincoln Day dinners, Cross says likely Democratic nominee Jack Conway has been quietly raising money and developing his campaign strategy for the fall.

Cross predicts the GOP nominee will employ the well-established Republican political tactic of connecting Conway to fellow Democrat President Obama. The state attorney general has admitted he voted for Obama, but then says he sued the president over his administration’s climate change regulations. Cross says Republicans will counter that Conway didn’t sue over the Affordable Care Act.

Other Statewide Races
In the Republican primary for attorney general, state Sen. Whitney Westerfield of Hopkinsville is facing Mike Hogan, who is the county attorney for Lawrence County. Cross describes Westerfield as “sort of green when it comes to statewide politics” but says he’s accrued a good legislative record during his first term in the General Assembly. Hogan comes from a more Republican part of the state, and may have an appealing name to GOP voters there, according to Cross.

Andy Beshear, son of Gov. Steve Beshear, is running unopposed in the Democratic primary for attorney general. Cross says he expects the governor to play a considerable if largely invisible role in his son’s campaign.

Cross says both candidates in the GOP primary for agriculture commissioner have good track records in farming and in the legislature. He says State Rep. Richard Heath of Mayfield is making good use of TV commercials, whereas Rep. Ryan Quarles of Georgetown has a strong Internet presence.

The winner of that primary will face Democrat Jean-Marie Lawson Spann.

“It was remarkable that she was able to get through the primary unopposed,” Cross says of Spann’s candidacy. “It’s either an indication of her great perspicacity or the lack of energy in the Democratic Party. Who knows?”

Finally Cross admits he hasn’t watched the primaries for state treasurer that feature five Democrats and three Republicans. Cross says the race essentially elects someone to sit on the Kentucky Lottery and pension boards, and to manage the state’s unclaimed property program. 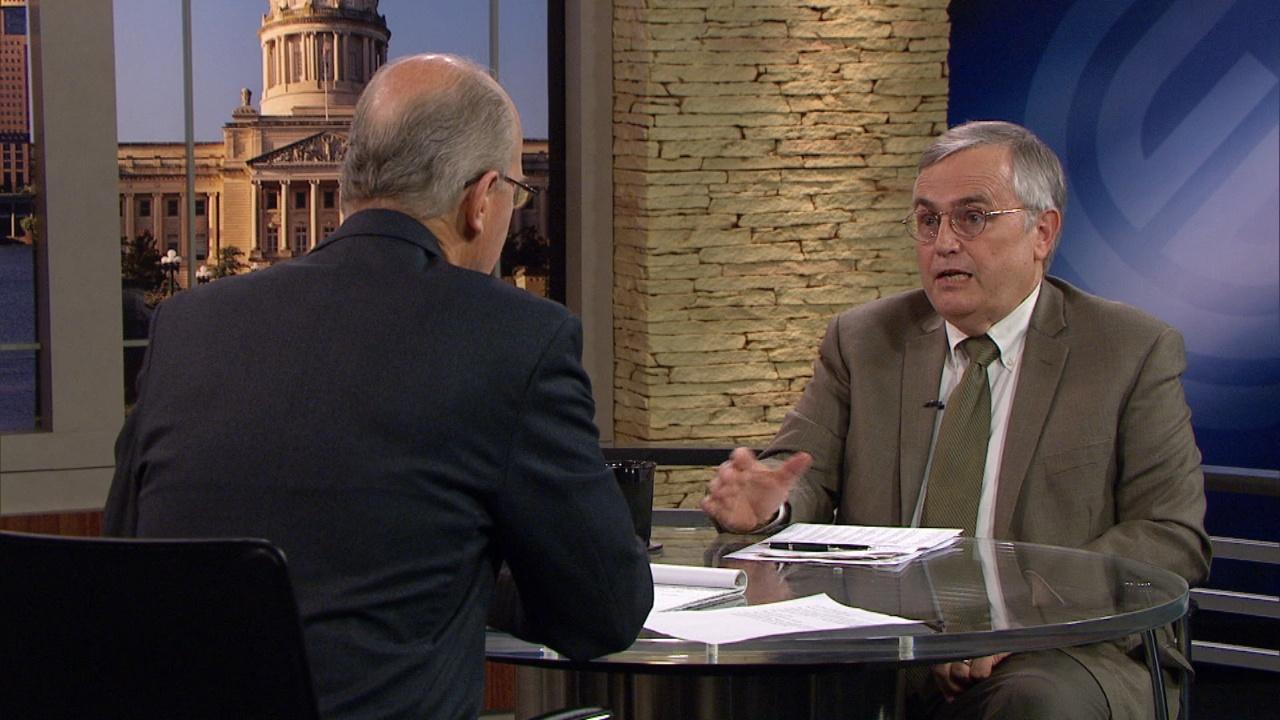