With a busy and productive 2015 behind him, U.S. Sen. Mitch McConnell has set his sights on achieving an even more ambitious set of goals in 2016.

The Senate Majority Leader appeared on KET’s One to One to discuss his legislative and political priorities for the new year.

The Accomplishments of 2015
The Kentuckian ascended to the majority leadership post with a pledge to not shutdown the federal government, to not default on the national debt, and to end dysfunction in the Senate. In his push to restore the chamber to “regular order,” McConnell says he made the body more open to floor debates, adding amendments to bills, and voting on legislation.

McConnell is proud to note that in his first year as leader, the Senate passed a budget bill and took some 200 roll call votes on amendments. He compares that to only 15 such votes under former Majority Leader Harry Reid (D-Nevada) in 2014.

The senator says he also wanted to find issues the Republican Congress and President Obama, a Democrat, could find consensus on and then work to pass legislation in those areas.

“We do have divided government,” says McConnell. “We do know the president is not Bill Clinton – he’s not a centrist looking to come to the middle… [So] my view was just because you have differences is no excuse not to do the things you can agree on.”

And to a degree, they did. McConnell counts trade promotion authority, an update to No Child Left Behind — called the Every Student Succeeds Act, a $300 billion highway bill, and a cybersecurity measure among the legislation passed by Congress and signed into law by the president. Obama also signed the 2015 National Defense Authorization Act, which includes $80 million for a new hospital at Kentucky’s Fort Knox Army base.

“So if you look back over the first year, dysfunction is clearly over by any objective standard,” says McConnell.

Goals for 2016
Despite those successes, huge political differences remain between Republicans and Democrats in Washington. Obama vetoed the Keystone XL Pipeline and the most recent attempt to repeal the Affordable Care Act. McConnell says he still hopes to repeal what he sees as onerous environmental regulations like river and stream pollution rules called the Waters of the U.S., and the Clean Power Plan over coal-burning power plants. McConnell has been a fierce opponent of regulations that affect the coal industry in Appalachia.

“We have a depression in eastern Kentucky, largely created by the president and his administration, not as a result of any legislation,” McConnell contends. “It’s a desperate situation.”

Even though the House and Senate tend to be less productive in federal election years, the majority leader hopes 2016 will see the Congress pass all 12 appropriations bills that fund the federal government. He says that hasn’t occurred since the 1990s, and doing so would make government operations more orderly.

“That would be an improvement and would be a significant accomplishment, even in an election year,” McConnell says. “That alone would distinguish us from the way the Congress has functioned for 20 years.”

Kentucky Politics
Back home in Kentucky, McConnell has another significant goal for the new year: to flip the state House of Representatives to Republican control for the first time in more than 90 years. He says Kentucky’s future growth and competitiveness depend on passing legislation covering right to work, charter schools, medical review panels, and a repeal of prevailing wage.

But he says none of those things will happen if Democrats maintain a majority in the House. To help the state GOP, McConnell says he’s been working for six months to help recruit Republican candidates for the fall state legislative races.

“If you want to make policy you have to win the election, because winners make policy and losers go home,” says the senator.

The senator also gives high marks to his former senate campaign opponent Matt Bevin, who he defeated in the 2014 Republican primary. McConnell says Gov. Bevin is off to a good start and has made several impressive cabinet appointments. He says that one of the biggest challenges Bevin faces is restructuring the Medicaid expansion to make it more affordable for the commonwealth.

Presidential Politics
As for winning the White House this year, McConnell says it’s not enough to find a Republican who can carry all the red states. He says the party needs a nominee who will win the so-called purple states of Colorado, Florida, Iowa, Nevada, New Hampshire, Ohio, Pennsylvania, Virginia, and Wisconsin. He says President Obama carried those states in both of his victories, and President George W. Bush took most of them in his two elections.

“You have to nominate somebody who can appeal to voters who are not locked in to either the Republicans or the Democrats to get elected president,” McConnell says. “So I’m pulling for somebody who can win.”

“I think the disadvantage Hillary Clinton has is she’s fully associated with all the policies of the last eight years,” McConnell says. “There’s no way to run away from that and she’s not trying to run from it. She’s going to be arguing for more of the same.”

McConnell says picking a strong Republican who can win the purple states is also important because several of those states have Senate contests that the GOP needs to win for McConnell to remain as Majority Leader. He says he’ll be focused on those Senate races and continuing to push legislation he sees as vital for country.

“If you were listening to presidential candidates, you’d think nothing was happening, but I’ve decided to shut out all that rhetoric from the campaign trail, most of which has nothing to do with what’s really happening in Congress,” McConnell says. 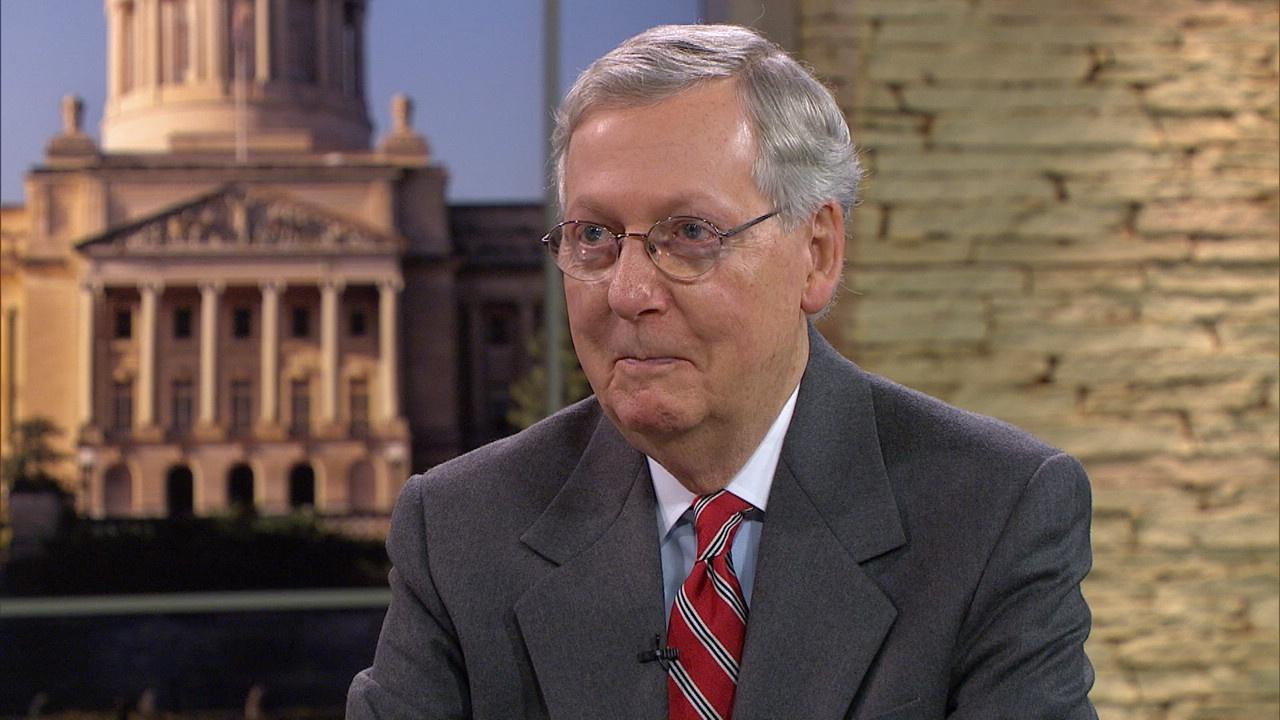