Would you be surprised to know that it’s actually aerospace parts and products?

In the first nine months of this year, Kentucky exported nearly $5 billion worth of space-related goods. That’s $1.2 billion more than the state exported in motor vehicles and parts.

On KET’s One to One, host Bill Goodman spoke with Ben Malphrus, the director of MSU’s Space Science Center, and Roger R. McNeil, Dean of College of Science and Technology, about aerospace research at MSU. Their conversation was recorded at the 2014 IdeaFestival in Louisville.

State-of-the-Art Facilities House Cutting-Edge Research
Malphrus says the heart of Morehead’s Space Sciences Program is research and development of miniature satellites that can be produced in less time and for less money than traditional satellites. Students and faculty work in collaboration with other schools, federal agencies, and aerospace companies around the world to create hardware and electronics for satellites that can fit in the palm of your hand.

The Space Sciences program is centered in Smith Booth Hall at Morehead. It’s a $15 million facility that includes clean rooms for fabricating satellite components, a special electromagnetic chamber that mimics the space environment, and state-of-the-art measuring equipment to test equipment performance. The school also has a 21-meter antenna system to track and download data from the satellites once they’re in space.

A New Industry to Revitalize Eastern Kentucky
Roger McNeil says the vision for the space sciences program is to foster a new industry for Kentucky that will attract high-tech students and jobs to the state. He explains that the miniature satellites the school is developing involve innovative, so-called “disruptive” technologies that create new markets.

But that doesn’t mean their graduates can only work for aerospace companies. Malphrus says students will be qualified to work in the automotive, telecommunications, or computer industries, or any other businesses that can benefit from miniaturization of technology.

McNeil says Morehead State is also launching a business incubator to help launch companies that would emerge from the research done at the school. He sees this kind of entrepreneurship as key to revitalizing the eastern Kentucky economy.

The two men also credit Kris Kimel of the Kentucky Science and Technology Corporation and Kentucky Space for helping to foster aerospace initiatives in the state. Despite jokes about “Kentucky-fried satellites,” Malphrus says Kimel has worked hard to lure talent and business to the commonwealth. Malphrus says Kimel recruited Bob Twiggs, who invented cube satellite technology at Stanford University, to join the Morehead State faculty.

“Aeropsace is [now] the number one manufactured export in the state, so I don’t think people are laughing any more,” Malphrus says. 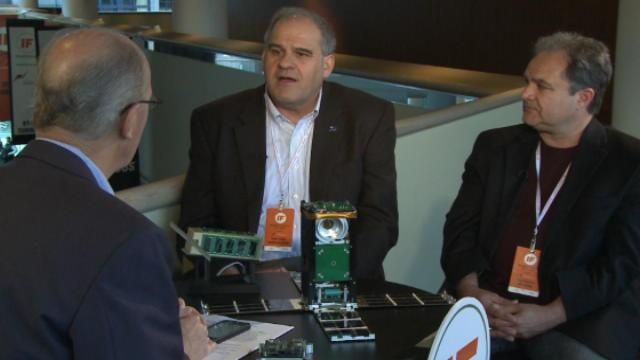