In the spring of 2011, as politicians in Washington debated another possible government shutdown, Ron Leach was serving as a physician’s assistant with a U.S. Army combat battalion in Afghanistan. With a shutdown looming, Leach says he saw soldiers, who should’ve been focused on their combat patrols, wondering whether they would be paid.

That’s when Leach decided to run for Congress.

The Brandenburg Democrat is challenging incumbent Republican Brett Guthrie for Kentucky’s 2nd Congressional District seat. Leach appeared on this weekend’s One to One to discuss his candidacy and several key issues in the race.

Leach retired from the military in 2012 after serving nearly 30 years in the Army and National Guard. He worked as an infantry soldier and paratrooper, and did Special Forces duty before receiving training as a medical officer and physician’s assistant. His last 10 years in the Army included two combat tours in Iraq and two in Afghanistan.

Leach says he was discouraged to be fighting to build democracies in those countries while watching a dysfunctional democracy at home, especially during the protracted debt-ceiling debate of 2011.

“There’s no question we need to get our long-term fiscal house in order in Washington,” Leach explains. “But you don’t do it by telling the world that you might be a dead-beat nation. You don’t do it by refusing to pay obligations that the very Congress that was throwing tantrums had committed us to.”

New Threats fom Islamic Militants
Given his time in the Middle East, Leach has strong opinions about the nation’s response to the so-called Islamic State (ISIS). He acknowledges those jihadists are a growing threat in the region, but doesn’t see them as an imminent danger to western nations.

Leach says American actions in the Middle East contributed to the rise of ISIS. He argues the U.S. invasion of Iraq and subsequent efforts to eliminate the Baath Party there left a power vacuum that facilitated the rise of Islamic extremists in Iraq. Then in Syria, Leach says western nations failed to support that nation’s secular democratic movement, which, if successful, could’ve have limited the development of ISIS there.

Given the threat posed by the militants, Leach says he prefers an American strategy of targeted air strikes to disable and demoralize ISIS fighters. But he is against sending large numbers of American combat troops back into the region. “We have, without a doubt, the most professional, the most capable military the world has ever seen,” Leach says. “But that does not make it the answer for every situation.”

Instead, Leach says native Iraqi and Kurdish Peshmerga forces should finish the job of dismantling ISIS.

Domestic Issues
During his One to One interview, Leach also explained his positions on a number of domestic policy issues:

A Desire to Change the Culture in Washington
As a political newcomer who taught high school agriculture and science earlier in his life, Leach says his goal is to represent the people of the 21 western and central Kentucky counties that comprise the 2nd district.

Leach contends Washington lawmakers are too focused on donors (or sponsors, as he calls them) that fund their reelection campaigns, and he says elections have become auctions. He also bemoans the gridlock and ideological divides that have defined the federal government in recent decades.

“We need to start governing and acting like adults in Congress,” Leach says. 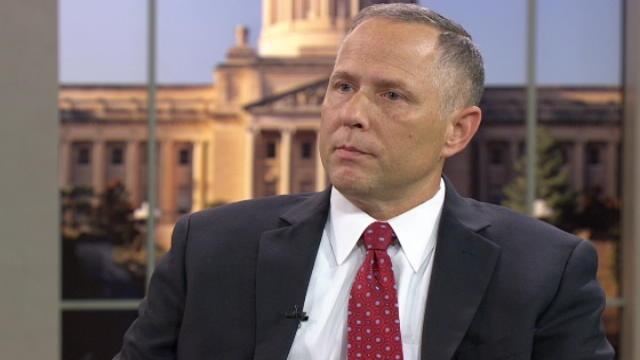