After 30 years on Capitol Hill, Mitch McConnell finally achieved the position he had long sought: Senate Majority Leader. Yet the job he’s held since January has not been easy: The Kentucky Republican oversees a slim GOP majority in the Senate, four members of his caucus are campaigning for president, and he can’t always count on House Republicans to fall in line on policy.

But McConnell says his first task as majority leader was to get the Senate working again. He says the chamber was frozen by partisan dysfunction.

“We basically retreated to our separate corners and were engaged in political showmanship 100 percent of the time,” McConnell says.

Kentucky’s senior senator appeared on KET’s One to One to discuss his efforts to kick-start the Senate and preview several issues lawmakers will face in the coming weeks.

Repairing a Broken Senate
McConnell says he wanted to re-engage lawmakers of both parties in the legislative process by returning to established rules and customs known in Washington as “regular orders.” The Republican criticizes former Majority Leader Harry Reid for how the Nevada Democrat tightly limited what bills and amendments would be considered.

McConnell, on the other hand, wanted to open the chamber to more debates and votes. He proudly notes that there have been some 160 roll call votes on amendments so far this year. That’s compared to only 15 such votes in all of 2014 under Reid.

“I wanted to get the Senate functioning again,” McConnell says. “I felt like it needed repairing in order to get it in a position where it could achieve something for the country.”

Bucking a Partisan Congress
The majority leader’s drive to “make a difference” has led the Republican to partner with high profile Democrats on legislation that hasn’t always made colleagues in either party happy. McConnell joined California Democratic Sen. Barbara Boxer to author a transportation bill covering highway and infrastructure construction for six years. But that measure faces opposition from other Senate Democrats as well as House Republicans.

McConnell also partnered with President Barack Obama on trade promotion authority (also known as fast-track authority). That gives the president the power to negotiate trade agreements and send them to Congress for votes without the threat of amendments. McConnell credits Obama for realizing the value of these international deals despite push-back from some Democratic stalwarts.

“Trade agreements, even though controversial with unions and environmental groups, are good for the American economy and the president recognized that,” McConnell says.

Democrats didn’t pose the only opposition. Some GOP members were reluctant to give Obama more power, but McConnell says he was able to convince them that the grant of trade promotion authority for six years would benefit the next president, who he hopes will be a Republican. That bill became law at the end of July.

The Iran Nuclear Agreement
“We never had a bad relationship,” McConnell says of his dealings with Obama, who he describes as smart and capable, but also the most liberal president since Woodrow Wilson.

“He just has a different vision of what America ought to be than most of us,” the senator continues.

Without Democratic majorities in either the House or Senate, McConnell says the president has used executive orders to push his agenda. For example, McConnell continues to be highly critical of the Obama administration’s environmental regulations that impact the coal industry.

McConnell also opposes the Iran nuclear deal negotiated by the U.S. and five other global powers. He contends the agreement doesn’t do enough to limit Iran’s nuclear weapons development, nor does it address the nation’s support of terrorism in the Middle East. And he calls the program to inspect Iran’s nuclear development facilities “literally absurd.”

“I’ve got a lot of very serious foreign policy experts in the Senate Republican caucus who are not terribly partisan. None of them are voting for [the Iran nuclear deal],” McConnell says. “I think the end result of this is that our friends are skittish and our enemies think they’ve really made a good deal.”

More Sanctions, Not Fewer
The Republican leader contends the agreement is a mistake that will lead to more chaos in the Middle East. Rather than removing economic sanctions against Iran in exchange for the country curbing its nuclear ambitions, McConnell thinks America and the other world powers should take a tougher stance.

“Instead of spending a year and a half basically negotiating away the sanctions, what we should’ve been doing was squeezing them more,” McConnell argues.

The senator is quick to add that the pact is not officially a treaty. If it were, it would have to pass the Senate with a two-thirds majority. Instead McConnell says the Iran deal is an executive agreement, which does not have the force of law of a treaty and could be changed by a new president.

Since lawmakers objected to having no voice in the deal, they passed legislation earlier this year called the Iran Nuclear Agreement Review Act, which gave Congress 60 days to approve or reject the pact. Legislators are expected to vote down the agreement, but Obama has likely garnered enough support from Democrats to sustain a presidential veto of a Congressional rejection. McConnell expects the Senate to vote on a resolution of disapproval by Sept. 17.

A Witness to History
Even as he prepares for that vote and a battle over discretionary spending later this fall, McConnell took some time recently to visit Somerset Community College, where he gave a speech about one of his mentors, former Kentucky Sen. John Sherman Cooper. McConnell interned in Cooper’s office during the summer of 1964 when the Kentucky Republican helped break the filibuster against the Civil Rights Act.

McConnell says he returned to Washington during the summer of 1965 and happened to visit Cooper’s office on the day President Lyndon Johnson was to sign the Voting Rights Act. McConnell, then a law student at the University of Kentucky, says he was thrilled when Cooper invited him to attend the ceremony and witness the historic signing.

Now, 50 years later, McConnell says the Civil Rights and Voting Rights Acts helped the United States get over what he calls the nation’s original sin of slavery. As for the 2013 U.S. Supreme Court decision to remove certain restrictions the voting rights law placed on some states, McConnell calls that change a “minor adjustment.”

“The Voting Rights Act is still intact, it applies nationwide, and it has literally transformed our country,” McConnell says. 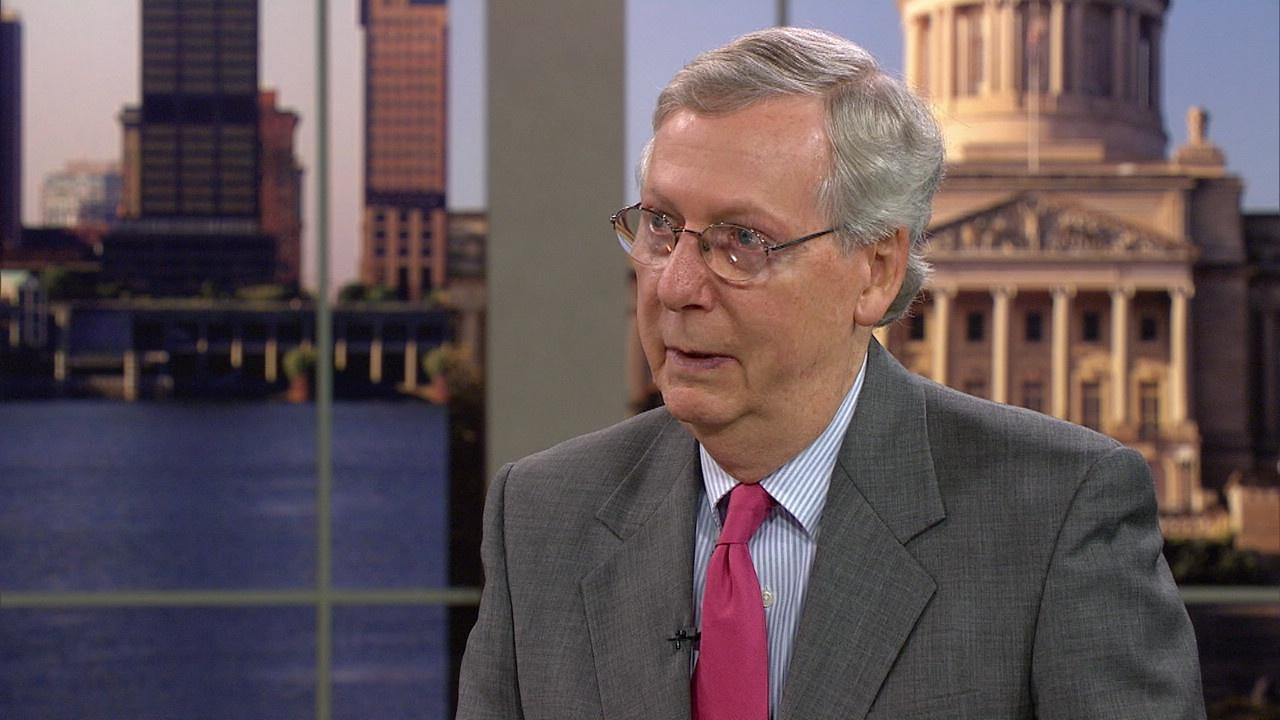