Bill speaks with U.S. Senate Majority Leader Mitch McConnell (R-KY) about the 114th Congress and his relationship with President Obama during the final two years of his presidency.
Season 10 Episode 5 Length 28:01 Premiere: 01/26/15

With historic numbers of Republicans in Congress, the GOP is poised to make sweeping changes to the American political agenda.

That is, if it weren’t for the Democrat in the White House.

But the new Senate majority leader, Kentucky’s Mitch McConnell, remains hopeful that the Republican-controlled Congress can achieve great things and he says he hopes President Obama will join them in that effort. McConnell discussed his legislative aspirations and his plans for the Senate in a special of edition of One to One with Bill Goodman.

A Divided But Productive Government
Even though different parties control Congress and the White House, McConnell says there still should be points of agreement that can lead to legislation. He says divided governments can be productive, as they were under Presidents Ronald Reagan and Bill Clinton.

For his part, McConnell hopes he and President Obama can find common ground on trade agreements and infrastructure spending. The Senator says Republicans are prepared to grant Obama trade promotion authority (sometimes called fast-track authority), which would enable Congress to approve a trade agreement negotiated by the president on a simple majority vote without amendment or filibuster. McConnell says such trade agreements would help the American economy.

The Republican acknowledges repairing the nation’s crumbling infrastructure is a thornier issue. He and his party are against raising the gasoline tax, which provides revenues to the Transportation Trust Fund. McConnell says he hopes the White House will consider an option proposed by Kentucky’s junior senator, Republican Rand Paul. That measure would allow corporations to repatriate profits from overseas in return for a lower tax rate on those funds. The proceeds from that would help pay for road and bridge repairs.

Another priority for McConnell is to bring the Keystone XL proposal to a vote as a way to force Obama to make a decision on the oil pipeline project. The majority leader says Keystone has wide bipartisan support, would create 42,000 construction jobs, and would have no adverse environmental impact while advancing the country’s energy security.

“We are perplexed as to why the president continues to delay a decision here,” McConnell says.

Other Points of Conflict
McConnell dismisses Obama’s recent State of the Union address as a campaign speech with more tax-and-spend promises like government-funded community college tuitions. He also criticizes how Obama downplayed the terror threat posed by Islamic militants.

The Republican also says Obama is wrong on sanctions against Iran. McConnell contends the Iranians should be held accountable for delaying progress on talks to prevent the country from developing nuclear arms.

A Student of Senate History
Senate Republicans unanimously elected McConnell as leader after they gained a 54-seat majority in the mid-term elections.  McConnell says the biggest advantage of being majority leader is the ability to set the agenda for the Senate – one that he says Republicans feel is better for the country.

McConnell is also eager to change the work environment in the chamber. As a student of Senate history, McConnell says he’s been influenced by the 1961 transition between Democratic Majority Leader Lyndon Johnson, who McConnell says was very controlling, to Mike Mansfield, who was more open and bipartisan.

“The reason I paid some attention to Mansfield,” says McConnell, “is because I felt like the last four years in the Senate, my predecessor, Harry Reid, was running the Senate very much like Lyndon Johnson: centralizing everything in one office, denying people of both parties the opportunity to vote and express themselves.”

McConnell says he wants his leadership style to be like Mansfield’s as he moves to make the Senate more open to freewheeling debate, legislative amendments, and votes.

“I hope it will be written that the Senate was restored to its greatness,” McConnell says of his plans for the body.

Watch an hour-long special about McConnell as Senate Majority Leader, or view a December 2014 interview with McConnell at the Henry Clay Estate in Lexington. 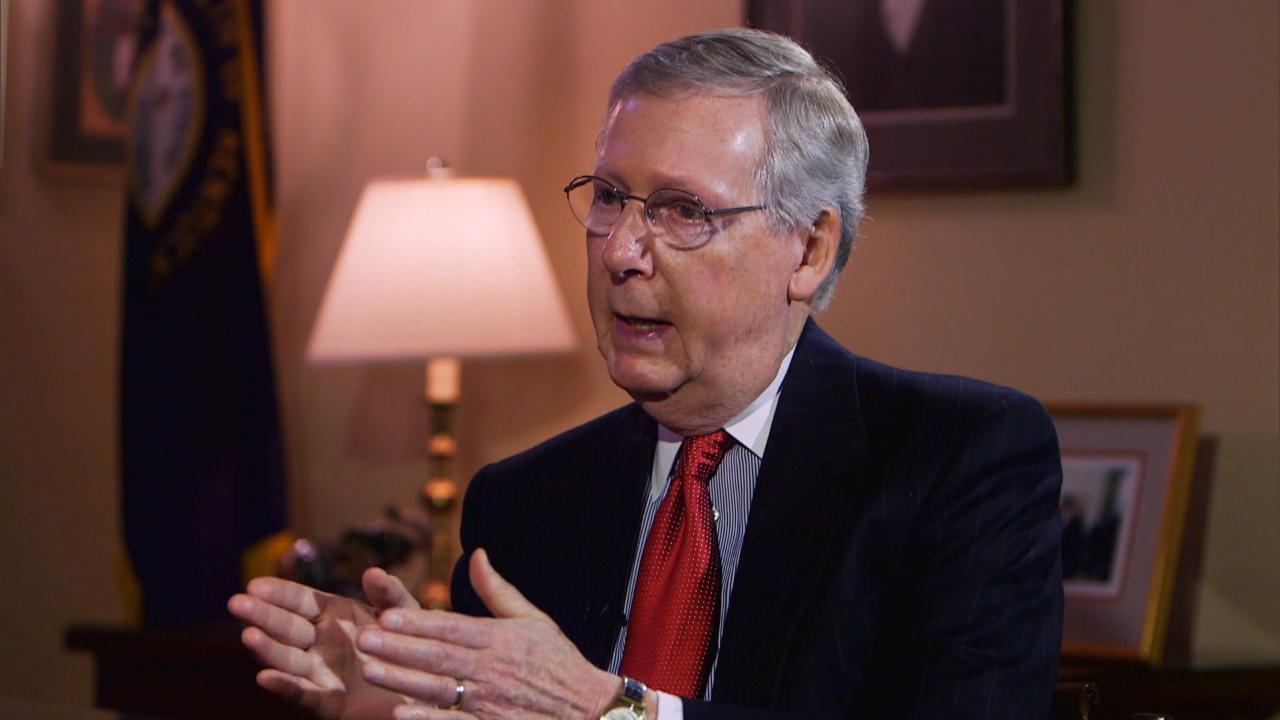