Host Bill Goodman sits down with Kentucky's senior U.S. Senator Mitch McConnell to discuss the issues topping his priority list as the new U.S. Senate Majority Leader and how they will impact the nation and Kentucky.
S10 E4 Length 28:06 Premiere: 1.6.15

In a wide-ranging conversation, Sen. Mitch McConnell discusses his new role as Senate Majority Leader, his legislative priorities for the 114th Congress, and how he hopes President Obama will interact with Congress over the next two years. McConnell spoke with KET’s Bill Goodman in a One to One interview recorded at Ashland, the Lexington home of 19th century statesman Henry Clay.

The Evolution of Majority Leader
McConnell says the positions of Senate majority and minority leaders were formalized in the early 1900s. The move was a response to Progressive Era presidents like Theodore Roosevelt and Woodrow Wilson who took a more activist role in the legislative agenda than their predecessors, according to McConnell. He says the majority leader became vested with the power to set the agenda and direct debate in the chamber.

As he takes the reins of the Senate from Nevada Democratic Sen. Harry Reid, the former majority leader, McConnell pledges to allow longer policy debates among senators and amendments to legislation. He says he also wants to honor the bipartisan work to build legislation that’s done at the committee level.

“The Senate basically hasn’t done much of anything for three or four years other than just the very, very basic operation of the government,” McConnell says. “What I want to do is to open that up to both the majority and minority.”

McConnell says the first bill he’ll call up will be for the Keystone XL Pipeline project to deliver oil from Canada to the Texas Gulf Coast. He promises that will include the first “free-wheeling” energy debate in the Senate in more than a decade, in which members will be able to offer amendments on a variety of energy-related issues.

Working with President Obama
McConnell reports he had a private, Oval Office meeting with President Obama a few days after the November elections. He says the conversation focused on legislative issues on which the two men were likely to agree: tackling comprehensive tax reform, ratifying international trade agreements, and repairing America’s crumbling infrastructure.

The president has been criticized for not engaging more with congressional Republicans, and McConnell says he looks forward to more interactions with Obama. The Kentuckian says the country faces challenges that need to be addressed, and he believes the president and Congress can do that despite the political divisions between legislators and the White House.

“What I’m hoping is that the president will come to political center,” McConnell says. “Almost everything he’s done since election through unilateral executive action, most Americans would consider pretty much on the far left. The way you get things done in divided government is in the political center.”

McConnell calls the president’s action on immigration a “big mistake” that will hinder passage of more comprehensive immigration reforms. He also says Obama’s move to open diplomatic relations with Cuba will generate significant debate in the Senate, where three members are of Cuban-American heritage.

Lessons Learned from Fellow Kentuckians
As a student of Senate history, McConnell says he’s long appreciated how Kentuckian Henry Clay was able to hold the United States together while it wrestled with the issue of slavery, or what McConnell calls the original sin of the nation. McConnell wrote his senior thesis in college on Clay’s Compromise of 1850, which helped the country forestall a north-south crisis over slavery in new territories.

McConnell describes Clay as an extremely ambitious man who funneled that energy into a long and constructive political career. Although Clay lived in a different era, McConnell says the legislative process was the much the same then as it is today. “If you can’t figure a way to bring people together and to reach some kind of compromise to advance the interests of the country, you can’t accomplish anything at all,” McConnell says.

McConnell is the first Kentuckian to hold the title of Senate Majority Leader since Sen. Alben Barkley served in that position from 1937 to 1947. Even though Barkley presided over a significant Democratic majority in the Senate, McConnell says he had to balance two factions within the party: Progressive Democrats who favored President Franklin Roosevelt and his New Deal policies, and more conservative Democrats. McConnell says Barkley earned the respect of his Senate colleagues by standing up to Roosevelt on certain issues.

Goals for His Leadership Tenure
McConnell describes his new job as a fascinating leadership challenge to be able to mold the group of 100 individual senators into coherent body. He says Barkley and Clay were able to do that, and he hopes that he can demonstrate that skill as well. McConnell says he not only has to manage 53 of his GOP colleagues, but he must also gain the support of at least six Democrats to get the super-majority needed to approve significant legislation.

Even as he juggles his leadership duties and his national profile, McConnell says he remains focused on serving the citizens of his home state.

“I’m grateful to the people of Kentucky for keeping me in a job that I really enjoy and that I’ve tried to be good at for a long time now,” McConnell says. “I think I can go home every night and prop my feet up and think I maybe made a difference for a great state and for a great country.”

Watch an hour-long special about McConnell as Senate Majority Leader, or view a January 2015 interview with McConnell at his Capitol Hill office in Washington. 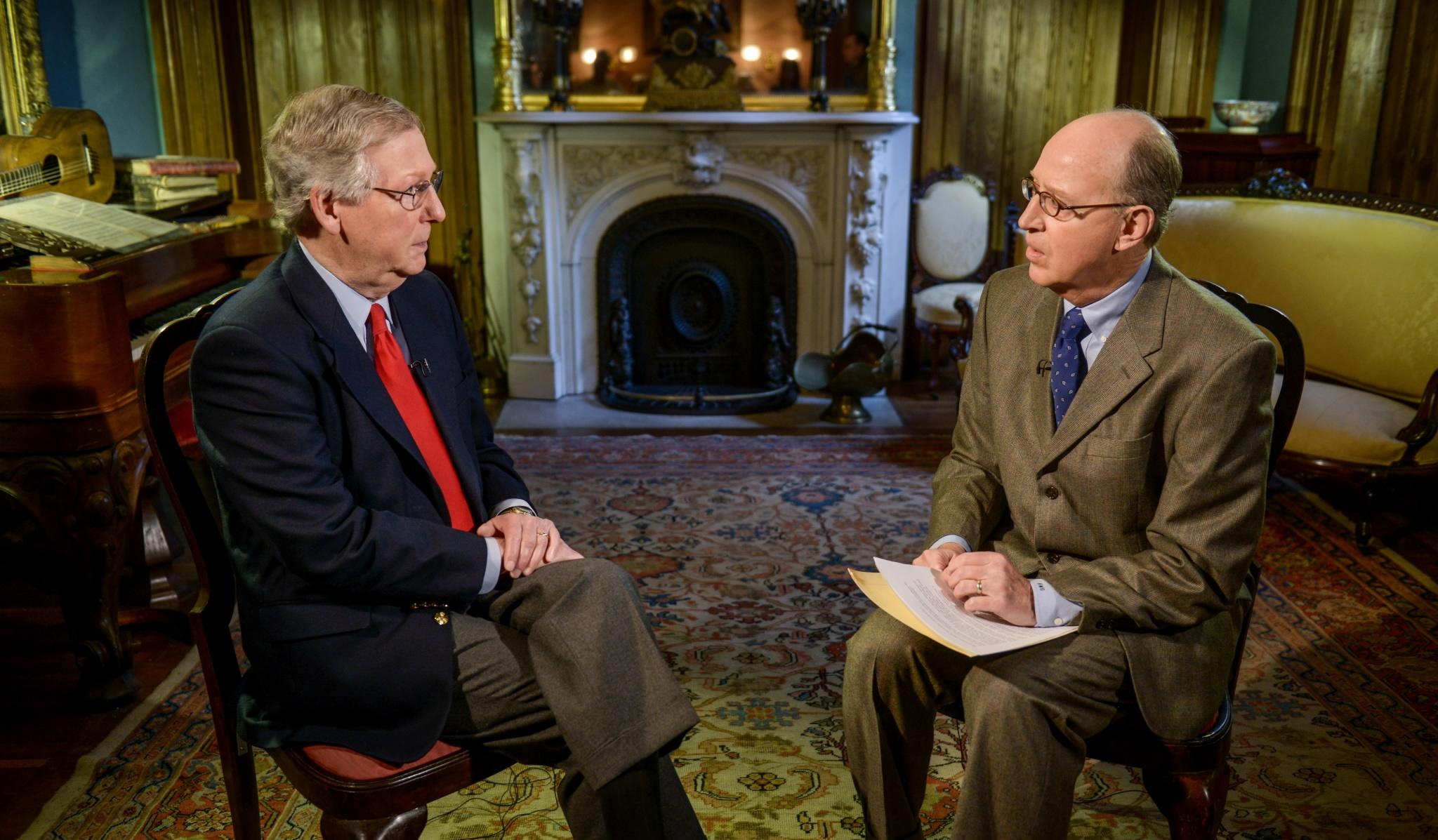