As Majority Leader of the United States Senate, Kentucky Republican Mitch McConnell wields tremendous power to set the agenda for the chamber.

Those powers aren’t rooted in the Constitution, or mandated by law. They evolved over the past hundred or so years based on the needs of the times. And Kentuckians have played key roles in the creation of that tradition.

In March of this year, McConnell appeared at the Old State Capitol in Frankfort to give a lecture on the evolution of U.S. Senate leadership. It’s part of McConnell’s ongoing series of talks about prominent Kentuckians who served in the body. This presentation focuses on Sen. Joseph Clay Stiles Blackburn of Versailles and Sen. Alben Barkley of Paducah.

Since the role of majority leader is a relatively new phenomenon, who actually directed Senate actions for the first 150 years of the chamber’s history?

Although a vice president is to “preside” over the Senate, that person has no official role other than to cast tie-breaking votes. They can’t even formally address the chamber unless recognized by a senator.

The Constitution also says that a when a vice president is absent, the Senate President Pro Tempore, who is a senator selected by his or her peers, will act as chair of the body. McConnell says through much of history presidents pro tem had little to do because vice presidents, who had no executive branch duties in early years, were almost always present in the Senate. He says the role of vice president didn’t begin to expand until the 1950s, when President Dwight D. Eisenhower made his vice president, Richard Nixon, a more active part of the executive branch.

So thanks to the Constitution, the two positions meant to manage the Senate actually had no practical powers.

“This vacuum meant that Senate leadership sprang up from a number of different forms, and became increasingly tied to the two political parties as they evolved,” says McConnell.

The Oratory of the Man from Versailles
Around the time of the Civil War, the political parties in the Senate began to elect full-time chairs to manage their respective caucuses (also called conferences). In the post-war years, three Kentucky senators served as Democratic caucus chairs: John W. Stevenson, James Beck, and Joseph Clay Stiles Blackburn.

Blackburn was born in 1838 into a prominent Woodford County family. (An older brother would serve as governor of the commonwealth). He was a lawyer and a Confederate Army commander before being elected to the state House of Representatives in 1871.

His stellar oratory made him a rising star in Democratic Party politics, and Blackburn wasted no opportunity to address a crowd. During his 1874 campaign for Congress, McConnell says Blackburn happened upon a public hanging about to take place in one Kentucky town. Noting Blackburn’s presence, the presiding sheriff asked the politician to sit next to the prisoner on the scaffold. When the condemned declined to offer any last words, Blackburn saw an opening.

“As the gentleman does not wish to speak, if he will kindly yield me his time, I will take this occasion to remark that I am a candidate for Congress,” McConnell says Blackburn reportedly said. “On and on he went with a lengthy, impromptu speech while the poor criminal awaited his fate.”

Blackburn’s talents for public speaking soon spread across the nation. When a Sioux Indian chief visited Washington, D.C., he made the Kentuckian an honorary member of the Sioux Nation and gave him the name of “Roaring Wind of the Bluegrass.” Blackburn even had a mountain peak named for him in what later would become Alaska.

“Blackburn became the first caucus chairman of either party to be hailed as party leader in official caucus records,” says McConnell. “Prior to that, no one had been called leader.”

After leaving the Senate, Blackburn was not done with public service. President Theodore Roosevelt appointed him as governor of the Panama Canal Zone, and he was a member of the commission charged with creating the Lincoln Memorial. Blackburn died in 1918 and is buried in Frankfort.

McConnell says that after Blackburn, party chairs grew in prominence during the early years of the 20th century, and by 1917 the title of “majority leader” was in common usage on the Senate floor. But the leaders still had little institutional power until another Kentuckian came along.

The Right of First Recognition
Alben Barkley was born in 1877 in a log cabin in Graves County. He practiced law in Paducah and was elected McCracken County Attorney before he had turned 30 years old. He went to Congress in 1912, and moved up to the Senate in 1927.

As a young man, Barkley got a chance to hear one of Joseph Blackburn’s enthralling campaign speeches. McConnell says the young Democrat shared Blackburn’s gift for oratory.

“Barkley was a successful politician in part because he was a terrific stump speaker and first-rate storyteller,” says McConnell. “Many recall Sen. Barkley saying, ‘a good story is like a fine Kentucky bourbon. It improves with age, and if you don’t use too much of it, it will never hurt anyone.’”

In the Senate, Barkley became a strong advocate for President Franklin D. Roosevelt and his New Deal Policies, but that support nearly cost Barkley his rise to political prominence.

In 1937, Barkley faced Mississippi Sen. Pat Harrison in a party vote for majority leader. McConnell says among Democrats, Barkley was known for siding with FDR (Roosevelt even endorsed Barkley for the job), while Harrison was considered a more conservative option.

Among his deeply divided colleagues, Barkley won the majority leadership by one vote.

“A lot of members of the Democratic caucus just didn’t feel that he had enough independence,” McConnell says. “Too many of them viewed him as FDR’s man and not a Senate man.”

Barkley made matters worse for himself when he lost control of the Senate near the end of that session. He was trying to usher his legislative priorities to a vote when a New York senator derailed the proceedings by introducing an anti-lynching bill. McConnell says the incident left Barkley “utterly humiliated.”

But then Barkley concocted a plan with Vice President John Nance Garner, who was an old friend. When Garner presided over the Senate, he would always recognize Barkley first since he was the majority leader. Barkley would then yield the floor only to his allies who would move the appropriate legislation forward. When Barkley was done, Garner would give the minority leader second recognition.

“Being recognized first permits… the majority leader to determine what the business of the Senate will be,” McConnell says. “Floor time is the coin of the realm in the Senate.”

That precedent set by Garner and Barkley in 1937 has been honored ever since, and it includes the right not just to bring matters to the floor but to prevent them from being considered as well.

Barkley recovered from his early stumble and went on to serve nearly 10 years as majority leader. President Harry S. Truman selected the Kentuckian to be his running mate in the 1948 presidential election. After his one term as vice president, or “the veep” as he was affectionately known, Barkley won reelection to the Senate. He died of a heart attack while giving a speech at Washington and Lee University in 1956.

McConnell says Barkley became a highly accomplished majority leader and set the stage for future leaders like Lyndon B. Johnson, Robert Byrd, Howard Baker, and Bob Dole to continue to evolve and consolidate their power.

Today in an era of deep partisan divisions and political acrimony, McConnell says the Senate, unlike the House of Representatives, is the place where the legislative process slows down and issues are more deeply considered. He believes that’s just as the framers of the Constitution envisioned it.

“I tend to take the long view that those founding fathers were absolute geniuses,” the senator says. “They understood human nature so well, they knew exactly how to divide the power, how to keep us from abusing each other, and how to keep this great, diverse country together all these many years.”

Previous episodes of Prominent Kentuckians in the U.S. Senate: 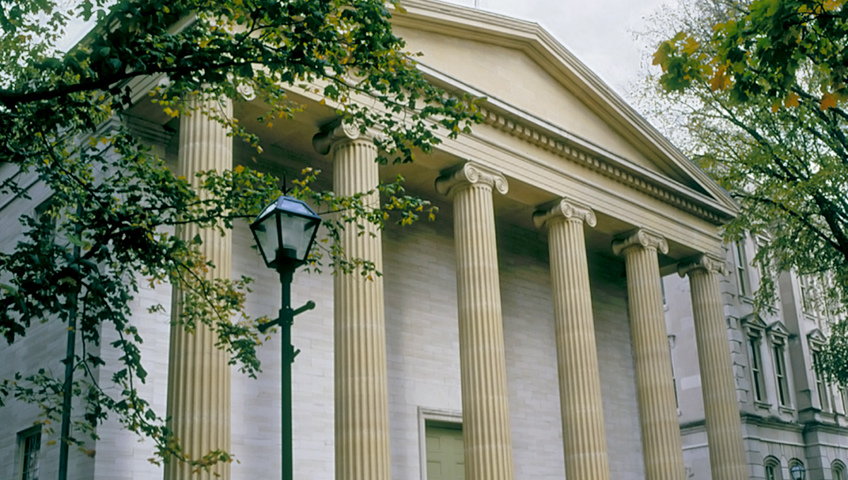 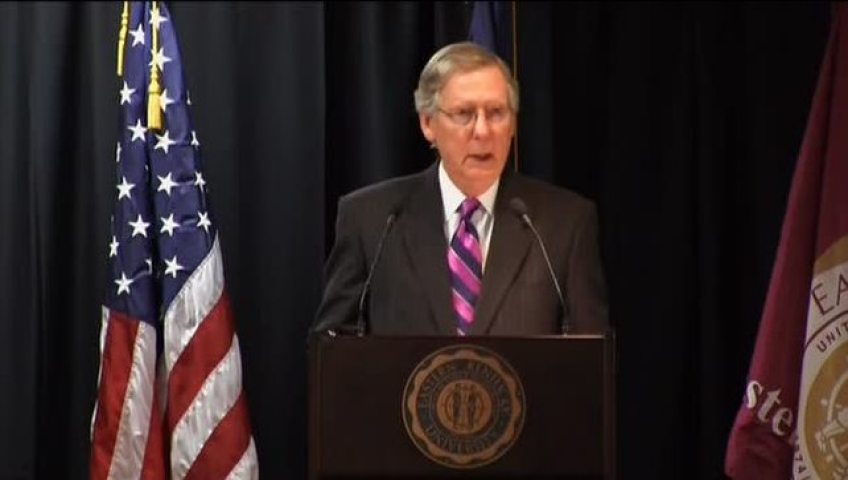