KET visits the Redbird Mission Dental Clinic in a remote part of southeastern KY where the dedicated and compassionate staff provide vital oral health care services to residents on a sliding scale fee. This segment is part of KET's Inside Oral Health Care initiative. www.ket.org/oralhealth

Hoskins is on Medicare, which provides no dental coverage. At Red Bird’s clinic, she can get dental work via their sliding scale fee program. Her tooth extraction at the clinic will cost her $50, while she would have to pay around $150 elsewhere.

“I know a guy who died from infection, it went to his brain, just from the tooth. That’s pretty bad,” she says. “I’m in a lot of pain, and everything like that. But I’ll get it out, and it’ll be over with. This is a wonderful program they’ve got. They help a lot of people.”

The Red Bird Mission’s dental clinic has been treating patients in an underserved region since 1976. KET recently visited the clinic as part of the ongoing Inside Oral Health Care initiative.

The Red Bird Mission is located in a remote corner of three Kentucky counties in Appalachia: Clay, Bell, and Leslie. It began as a settlement school in 1921, and gradually added outreach services such as medical and dental care. About 3,000 people visit the mission’s dental clinic each year.

“We’ve had multiple dentists through here, very dedicated people who understood that health care was not just coming in and getting your blood pressure taken, or taking care of infections, or illnesses,” says Kari Collins, executive director of Red Bird Mission.

The clinic treats patients ranging from pediatrics to seniors, and has a sliding fee scale to assist patients such as Yvonne Hoskins who are on Medicare as well as those who don’t have dental insurance but are not eligible for Medicaid. Funding through donations and grants has helped the clinic fulfill its mission of service, despite occasional lean times, Collins says.

Treating an Underserved Population
Dr. Bill Collins, DMD, of Pikeville is the Red Bird Mission’s dental director. He also serves as the president of the Kentucky Dental Association and appeared on a recent episode of KET’s Kentucky Health to discuss the disparities of oral health care in Appalachia.

“There’s a lot of need at Red Bird. They’ve had over 300 patients on the waiting list,” Dr. Collins says. “It’s not just routine dental treatment. There’s a lot of kids here that we need to get into a preventive system, there’s a lot of adults with bad teeth that need to come out, and we’re talking full mouth extractions. The Medicaid expansion really put a lot more people under the umbrella, and we’ve been able to help a lot more.”

Oral Health Impacts Community Health
A lack of transportation is just one of the problems facing some of Red Bird’s patients. Many also have unstable housing and other medical concerns. According to Kari Collins, the dental clinic’s staff works in conjunction with other Red Bird employees to identify patients who have pressing needs aside from dental care and direct them to the mission’s other resources for help.

The clinic’s impact extends beyond improving patients’ oral health, Collins says. “When you’re going to send people out for job interviews, you can’t send them out not being able to speak clearly, because they don’t have teeth in their mouth, or they’re in pain because of their teeth, or they have chronic infections,” she says.

Brenda Hilton, like Yvonne Hoskins, has been visiting the clinic for years. She says that the Red Bird Mission and its services are critical to the region, which has seen some much needed improvement in oral health indicators in the past decade.

“Seeing a dentist is the most important thing about your health,” she says. “If you can’t eat, you can’t feed your body. And your body will go to waste. This is really important for the whole community, to keep this clinic going.”

This KET article is part of the Inside Oral Health Care initiative, funded in part by the Foundation for a Healthy Kentucky. 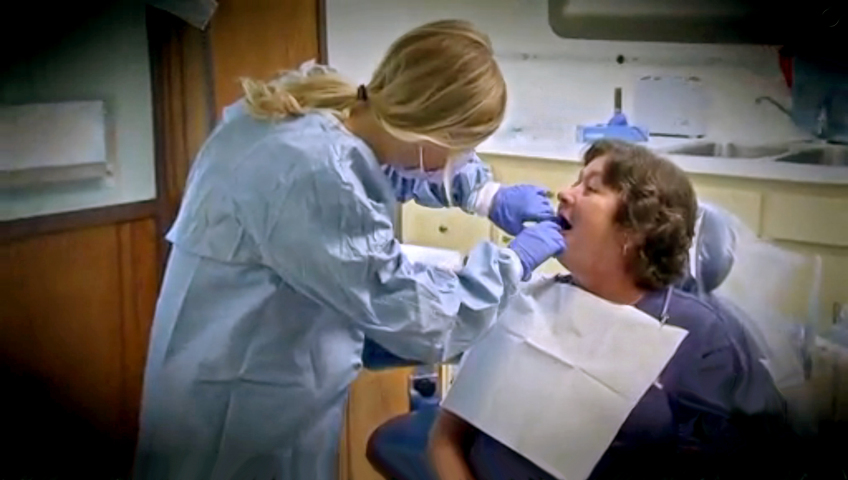