Now in its fourth year, SOAR, the Saving Our Appalachian Region initiative continues to the hard work of mustering the people and resources needed to transform a struggling eastern Kentucky.

“With the decline of the coal industry, it left us workless,” says Congressman Hal Rogers (R-KY-5), a founder of SOAR. “So we’ve been trying to reinvent and revitalize the economy of the entire eastern half of the state.”

“There is need here,” adds Kentucky Gov. Matt Bevin, “but where there is need, there’s the chance for opportunity.”

Rogers and Bevin along with University of Kentucky men’s basketball coach John Calipari were among the speakers at the 2017 SOAR Summit held on Aug. 4 in Pikeville. KET spoke with Rogers and Bevin and aired highlights of several of the summit presentations.

Wiring Appalachia for Broadband
Most of the presenters at the first SOAR summit in 2013, according to Gov. Bevin, were people from other states who came to eastern Kentucky to share what they had learned and achieved through their local revitalization efforts.

But now many of the presenters are Kentuckians who, in the short history of SOAR, have already made great strides to transform their home region, says Bevin.

“I am so encouraged by the fact that year after year people seem to keep coming with a sense of enthusiasm,” Bevin says.

The redevelopment effort is organized around workforce, business, and industrial development as well as healthy communities, local food systems, and regional tourism. But a seventh area, expanding broadband internet access, is the foundation on which all the other SOAR efforts rests.

“It will open up our region for the first time in history to economic development that we’ve never had a chance at yet,” says Rogers.

Wiring the small Appalachian communities for high-speed, high-capacity internet service has taken longer than anticipated though. Phillip Brown, executive directory of Kentucky Communications Network Authority, which is managing the project, says the process has been slowed because of the sheer mileage of wires that must be strung, the permitting required to hang the wires, and easements needed to access private property that the wires must cross.

But once the project is finished, Rogers says eastern Kentucky will be a vital part of the global digital economy.

“With the low-cost labor we have, the high work ethic that we have, and with the infrastructure to go to the world with our talents, we’ve got a big advantage,” Rogers says.

Kentucky Leading in Aerospace Manufacturing
High-tech jobs are already a part of the Appalachian economy, or ‘Silicon Holler’ as Rogers likes to call it. The congressman points to Rajant, a Philadelphia based manufacturer of wireless technologies, that opened a plant in Morehead to be close Morehead State University’s space science program. He says 17 MSU graduates now work for Rajant developing satellites. Other students in the Morehead space program have built mini satellites that now orbit the Earth, according to Rogers.

In fact the commonwealth is second in the nation in aerospace manufacturing (behind Washington), and the sector is poised for even more growth, says Kentucky Power President and COO Matthew J. Satterwhite. He contends the state workforce has the deductive reasoning and analytical skills required for these jobs. Plus Kentucky has eight times (the national average) the number of machinists and metal fabrication workers so critical to aerospace manufacturing.

“We’ve got to be proud, we’ve got to scream and shout and be aggressive and tell people where we are,” says Satterwhite. “Every state is having problems with labor force. We don’t have that. We have the available workforce, we have the skills.”

State officials are trying to fan the flame of advanced manufacturing across the commonwealth, and especially in eastern Kentucky. Bevin touts the massive aluminum rolling mill to be built in Greenup County that is expected to employ more than 500 people. The governor also says a California-based based battery technology company is considering Pike County for an advanced manufacturing facility that would provide an annual payroll of $50 to $60 million.

Bevin says such opportunities are not a “slam dunk” but he says the state is heading in the right direction.

Beyond building an economy that lures workers from out of state, Rogers says he wants an Appalachian region that will be able to retain its best and brightest youth.

“We have potential here that’s been untapped because we’ve had to leave home to find our future,” Rogers says. “If we could keep one generation here, it will transform the whole region.”

Using Technology to Train for Technology Jobs
To lure more tech-oriented businesses and jobs to the region will require more training opportunities to prepare eastern Kentuckians for that type of work.

“Developing our regional workforce to compete and succeed in digital economy is among our region’s highest priorities,” says Jeff Whitehead, Executive director of the Eastern Kentucky Concentrated Employment Program (EKCEP).

EKCEP along with its public and private sector partners operates seven hubs where eastern Kentuckians can receive telework training, find telework jobs, and work remotely for companies across the nation and the world. Since launching in 2015, Whitehead says more than 1,000 have used the hubs to prepare for a new career and to land work paying as much as $18 an hour.

Amazon Web Services, a division of the Seattle-based online giant, is also bringing training opportunities to Kentuckians. Amazon employs more than 12,000 people in the commonwealth and it offers its fulfillment center workers up to $12,000 in financial aid to earn a professional certificate or associate degree in the medical, technology, or advanced manufacturing fields.

John Stephenson of Amazon Web Services (AWS) says the company is also working with the Kentucky Education and Workforce Development Cabinet, the community college system, and public schools to make its AWS Educate platform available in the commonwealth. Stephenson says that’s a free, online, global initiative that provides students and educators with resources to train for cloud-related jobs, such as software engineer, systems administration, cybersecurity, and more.

But that’s just the first step.

“Finally we’ll be mapping private sector employers both located here in Kentucky and those employers around the world offering virtual employment opportunities to Kentuckians through the AWS Educate jobs board,” says Stephenson.

A Region of Servant Leaders
Hall of Fame basketball coach John Calipari gave SOAR Summit attendees a pep talk to start their day in Pikeville. The UK coach says he loves all of Kentucky but has a special affinity for the Appalachian counties.

“When I see the mountains and hollers, that’s how I grew up in Western P-A,” says Calipari. “The other thing I love is the people – they’re people I grew up with.”

Calipari says his grandparents worked as coal miners in West Virgina, and his parents were laborers in his hometown of Moon Township, Pa. Calipari and his sisters were the first in their family to attend college, he says.

The coach says he instills in his players a sense of responsibility for their own success and a desire to be “servant leaders” who will help their teammates on the court and their communities off the court.

“When you make life about others, it becomes easier – way easier, way more rewarding… and, you know what? You’re happier,” says Calipari. “It’s not what can I gather, what can I do. It’s how can I help someone else achieve and how can I take great pride and joy in what they do.”

That kind of leadership is evident in the people of eastern Kentucky, says Calipari. He says that attribute will help attract new business to the region and ensure that those companies thrive. 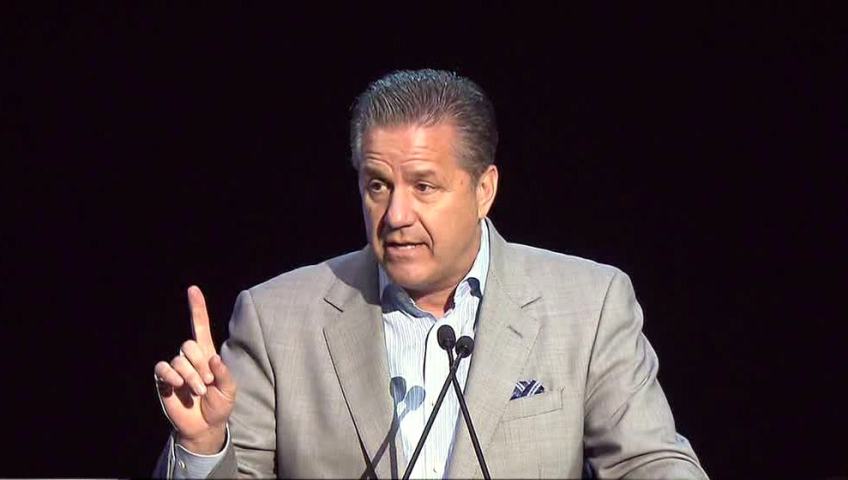