What constitutes “art” may be subjective, but our conception about a particular artistic work’s quality is also shaped – and arguably confined – by standards passed down through the generations in schools, museums, and the marketplace. Perhaps the highest praise one can give a contemporary artist, no matter what medium he or she uses, is that their work challenges the traditional assumptions about what art can accomplish and breaks new boundaries by engaging society at large.

Recently, four artists supported by the New York-based organization Creative Capital discussed their current projects, each of which addresses socially relevant topics in groundbreaking ways. The talk was presented as part of the 2016 IdeaFestival at the Kentucky Center for the Arts in Louisville and was filmed by KET for the series STEAM – Ideas That Shape Our World.

Kris Kimel, founder of the IdeaFestival, praised the assembled artists for creating work that exemplified the far-reaching vision that makes the festival a success. “When I experienced some of the things that the Creative Capital artists were doing and thinking about, it was in my mind so beyond what I had understood art to be, how they were expressing really important ideas and concepts, and often times what I think is important for art is to be able to imagine the unimaginable.”

Here are highlights from the four artists’ presentations at the IdeaFestival:

1) Heather Dewey-Hagborg is a New York and Chicago-based artist and educator who works in diverse media, ranging from biology to performance to design.

Dewey-Hagborg’s current project builds on work she began in 2012, which was inspired by something she saw during a therapy session. Dewey-Hagborg noticed a hair stuck in a crack on a portrait glass cover and began to wonder about the person who had left it there. After she left the session, she began to notice discarded gum, burned-out cigarettes, saliva on cups, and other ephemera of daily human consumption.

She began to collect samples of these leftovers, and, using genomic research, analyzed the extracted DNA to create 3-D portraits of the individuals who had discarded these “artifacts.”

Her project “Stranger Visions,” a collection of 3-D portraits, garnered international attention and led to an appearance on CNN, conferences in biology and economics, and profiles in major newspapers. “‘Stranger Visions’ aims to expose the possibility that we are entering an era with the potential for mass biological surveillance and to promote public dialogue about this,” she said. “The question then is, what can we do about it?”

In 2014, Dewey-Hagborg began researching DNA as a form of evidence with the aim of identifying its vulnerabilities. This culminated in her next project, “Invisible,” which is a DNA counter-surveillance kit that includes two sprays designed to remove or conceal DNA markers.

To create “Invisible,” Dewey-Hagborg had to purchase large amounts of DNA online, and doing that inspired her current project with Creative Capital. She began to wonder if those persons whose DNA she purchased knew that their genetic markers were for sale. Drawing from the story of Henrietta Lacks, an African-American woman who died of cervical cancer in 1951 and whose tissue was harvested and turned into the first immortalized cell line, Dewey-Hagborg investigated the increase in commodifying DNA as a way of both “re-identifying” anonymous donors and publicizing a marketplace that most people remain unaware of. “In short, we are all Henrietta Lacks,” she said.

The project is called “Sell/Bio” and is a collaboration with an investigative journalist and a researcher. Dewey-Hagborg’s work in the early stages is focused on uncovering the histories, business structures, and protocols that make a person’s most private biological information a product to be bought and sold.

“I’m thinking of this as a kind of investigative art, the production of art as evidence,” she said.

2) Jeffery Gibson is a painter and sculptor of Cherokee-Choctaw descent. He uses materials that often are found in historical museum collections of indigenous North American tribes. He has also been an educator for 20 years.

Gibson said that as a contemporary artist, he tries to make works that challenge the notion of what is called “traditional.” He may use traditional artifacts from Native American history, but his art is contemporary. Gibson’s objects are usually utilitarian – as exemplified by his collection of punching bags adorned with Native American beads and designs.

Three of the punching bags shown in background slides illustrate Gibson’s artistic sensibility. The work “White Power” claims a historically charged phrase for Gibson’s own purposes by juxtaposing traditional Native American beads with a symbol of pugilism. “I wanted to make a beautiful object that was charged with inherent contradictions,” Gibson said.

Another punching bag created in 2013, titled “People Like Us (CK),” is an homage to two of his inspirations, Sister Corita Kent and Vine Deloria. Kent’s screen prints adorned with democratic slogans were very popular during the 1960 and 1970s. Deloria’s 1973 book “God is Red” examined religious practices from a Native American perspective.

Another work created in 2013, “You’re Gonna Miss Me When I’m Gone,” embodies the enduring values of indigenous cultures. It was inspired by a Native American singer named Nikki Shawana, who created a traditional Native American round dance song based on the pop song “When I’m Gone” from the movie “Pitch Perfect.”

When asked about his long-term ambition as an artist, Gibson said: “I know that the work I make can have serious resonance. But art work is interesting – it becomes historically important through writing, through photography, through exhibition. And so, when you learn about an art work in a class, for instance, it’s presented to you as already being vetted by history. It’s been vetted by art historians saying, ‘This is valuable, and this is important.’ So my goal is to make those works for the future, and to bring Native American aesthetics, Native American stories, with it.”

3) Phillip Andrew Lewis is a multidisciplinary artist and professor at the University of Tennessee in Chattanooga. His creative research responds to historical events, psychology, phenomenology, and physics.

Lewis’s project, called “SYNONYM,” is a long-term art and research work that examines drug culture, addiction, and rehab. It arises from a harrowing personal experience that began in 1989.

As a young man, Lewis was held against his will for two years inside an unmarked building in a warehouse park. He was enrolled into a program called Synanon that originated in the 1950s as a totally immersive drug rehabilitation course. Over the subsequent decades Synanon took on qualities of a religious cult and was discontinued in the U.S. in 1991. Lewis and his parents were under the assumption that he would undergo rehab at Synanon for a few weeks, but instead he was removed from the outside world for two years. “My personal experience began during the Reagan ‘Just Say No’ era and the spawn of the ‘tough love’ teen industry,” he said.

Lewis undertook extensive research into Synanon, tracking down sites in the U.S. where the program existed and even traveling to the lone remaining Synanon group in Berlin, Germany, and communicating with members. “SYNONYM” is informed by his research and own experiences and incorporates video, sculpture, and photography. “Part of what I’m doing involves a critical study of group models, systems of control, behavior modification, and psychological experimentation,” he said.

Peters’ presentation included a video made with a group of high school boys in a competitive drill team. He filmed them marching and then challenged them to perform difficult tasks like wedging between two columns while remaining in formation. “Their discipline, focus, stamina, and their trained ability as a synchronized group was intimidating, but at the same time I found it beautiful,” he said. “I have a connection and deep interest in groups like this and the ways in which they function.”

Peters said he planned to return to Kentucky as his project develops, with the intent of spending time at the former Narcotic Farm in Lexington, the first drug treatment and research facility in the U.S. Watch a video about the facility.

4) Shawn Peters is an artist and storyteller, whose work most often takes the form of film and photography and has been showcased at film festivals such as Sundance and Tribeca.

“I’m really interested in super hyper-local stories,” he said, “ones that tell the history of communities through the lens of people who actually lived there, and who made space there.”

Peters’ project is titled “The Art of Dying Young.” It is an interactive tour through the lives of young men from Brooklyn neighborhoods who passed away and were memorialized through murals painted on the sides of buildings in the community.

“Memorial murals immortalize a life once lost to a community. It’s a place-making initiative,” he said. “It’s made by the people, for the people. And it gives value and importance to the memory of a life of their choosing.”

“The Art of Dying Young” uses video, virtual reality, 360 degree immersive audio, and augmented reality to tell the stories of these young men, their families, and their unique neighborhoods and experiences. The life of one of the young men, Italo Mchawi, is presented as part of Peters’ work-in-progress, in which viewers become active participants.

In addition to watching video interviews with Mchawi’s father and sister, patrons sit in the center of a surrounding bank of speakers that play a recording of an initiation practice from the Yoruba religion of West Africa that Italo Mchawi did not live to undergo. They also participate in a virtual reality recreation of a dream one of Mchawi’s friends had about him.

Establishing a sense of organic space is paramount for Peters, and this is displayed through an augmented reality tour of Brooklyn’s Bedford-Stuyvesant neighborhood that Mchawi grew up in. Augmented reality is accessed through smart devices (such as an iPhone or iPad) and superimposes computer-generated images and/or sound to create a composite view of the environment in real time.

“Augmented reality is an opportunity for us to actually consume content in the real world,” Peters said. “Why is that important? Because the brain works that way. The brain evolved in a body, and the body evolved in the world. We create context and long-term memory based upon space and the relationships of things to people.” 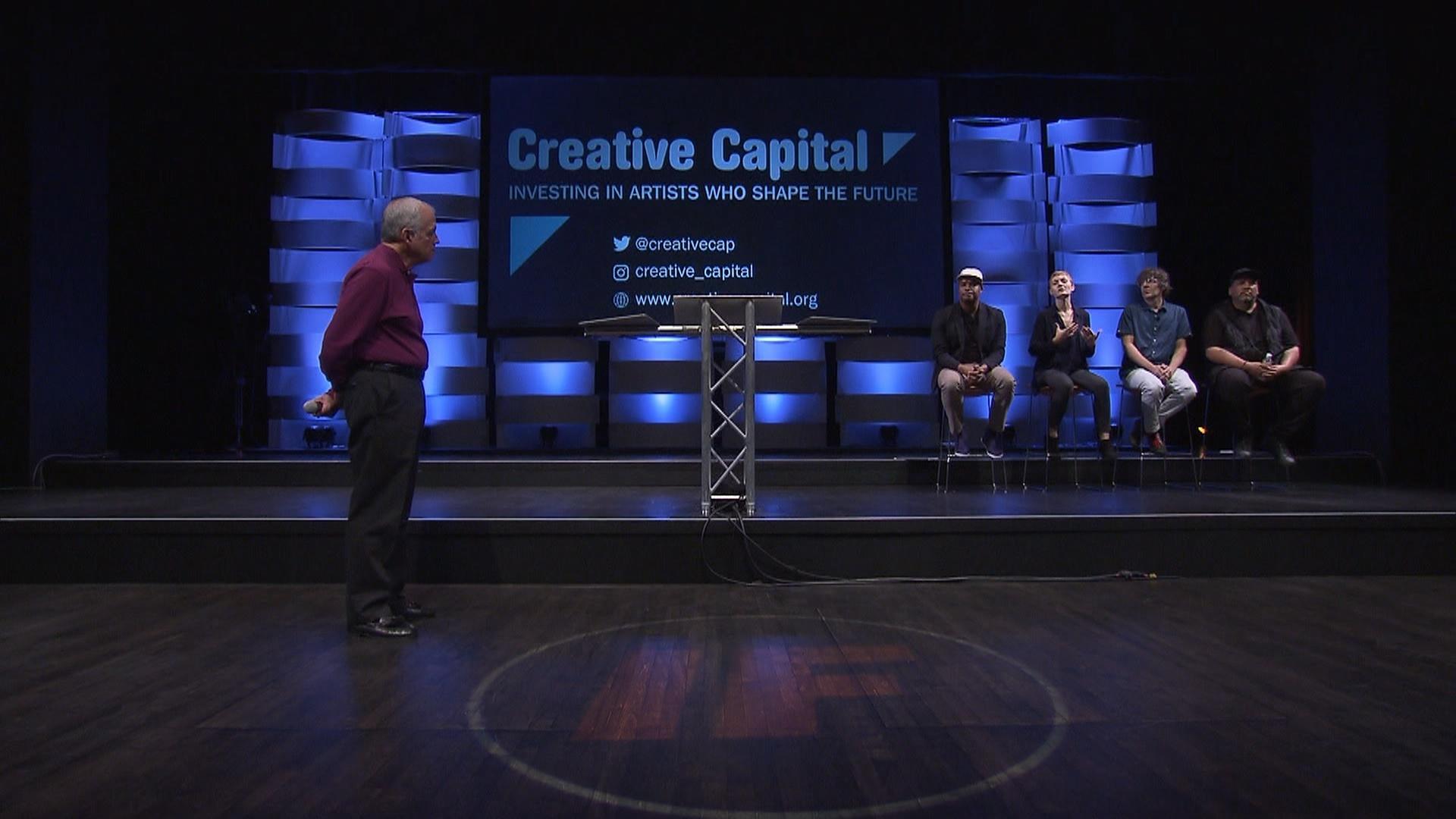