n recent years, the conscious capitalism movement has not only been growing, but increasingly arguing that companies that put community, ethics and sustainability at the forefront will out-perform more traditional, profit-driven companies. James Ledbetter, editor of Inc. magazine and Inc.com, moderates a discussion with Greg Christian, Tammy York Day, and Jeff Senne.
Season 2017 Episode 7 Length 56:13 Premiere: 7/24/17

On the timeline of capitalism’s evolution, the notion that a business should have a mission to improve society as part of its charter is a relatively new development. But the concept of “conscious capitalism,” where a company implements specific socially beneficial goals into its business model, is picking up steam through the first 15 years or so of this century.

Is conscious capitalism here to stay? Does it truly benefit both the world at large and a company’s bottom line? Moderator James Ledbetter and three guests delved into these questions and explored the potential for a profit-oriented business to both make money and effect social change recently. The discussion was presented at the 2016 IdeaFestival in Louisville at the Kentucky Center for the Arts and was filmed by KET for the series STEAM – Ideas that Shape Our World.

James Ledbetter is the editor of Inc. magazine and Inc.com. Based in New York, he worked previously for a variety of organizations, including Time magazine, Reuters, and the Village Voice. He was joined by the following panelists: Greg Christian, a chef and entrepreneur, whose Beyond Green Sustainable Food Partners was the first B corporation (benefit corporation) created in Illinois; Tammy York Day, chief operating officer of Delta Dental in Kentucky; and Jeff Senne, head of corporate responsibility at PriceWaterhouseCoopers.

According to Senne, the basic concept behind a B corporation is this: “How can business be profitable and also meet a social and/or environmental good at the same time?”

Here are four takeaways from their discussion in Louisville:

1) To instill a social mission into its business charter, a company must have committed leadership and a long-term, data-driven plan. Christian said that he earned accolades and money as an in-demand chef, but began to question his career path when his daughter got sick and he switched to organic food during her recovery.

“And I had this kind of awakening – maybe there’s more to do,” he said. “I started to remember my childhood, when I was a little boy, I really didn’t understand why the world didn’t work for everyone. I forgot that dream, which was a world that works for everyone and everything. And it started to come back to me, remembering my dream.”

Christian reorganized his food service company around an environmentally beneficial model, and added specific accountability measures into his charter to help achieve his goals – the hallmark of a B corporation. Around 10 years ago, his kitchen became an entirely zero-waste operation – one of the first in the United States. Christian recycles and/or composts all materials and uses locally sourced food whenever possible. When working as a consultant with school cafeterias, he sizes all food service prep portions accurately in order to eliminate waste.

York Day and Senne approach conscious capitalism from the perspective of larger firms. York Day said that it took her about two years to get a proposal ready for Delta Dental’s board to consider adding a social mission to their charter. With the support of her CEO, she assembled data to build “a really careful structured metric-driven strategy,” she said. “It has to be a long-term strategy, you can’t dabble in it, is what I always say. And it has to be part of the culture of your company, you know, from top to bottom.”

One concrete example of Delta Dental’s long-term vision is its Junior Achievement Program. York Day explained that it reaches 300,000 children and educates them about oral health and dental insurance. The return on investment will be evident years from now, when the children enter adulthood and become customers who are ideally practicing better oral health habits.

Senne offered the example of CVS Pharmacy from a few years ago as proof positive that sticking with a seemingly risky decision will ultimately benefit a company if it dovetails with their overall mission. In 2014, CVS stopped selling tobacco products in its stores, vacating about $2 billion of its revenue. Senne said that despite initial criticism, that decision tied closely with CVS’s brand as a wellness company, and resulted in reduced smoking rates among its customers.

“The recipe here is that the decision is material, and it’s ultimately connected to your long-term success, which makes that ROI argument and implementation very different than it may otherwise be,” he said.

2) Millennials are receptive to conscious capitalism practices and should carry this mindset throughout their careers. Ledbetter cited a study from Deloitte showing that 73 percent of millennials believe that business should have a positive impact on society. Senne stated that PriceWaterhouseCoopers has about 50,000 employees worldwide, with an average age of 27, and that the accounting services firm is deeply attuned to their perspective on career goals, which is more risk-oriented and focused on immediate gratification than prior generations. If a company does not meet their demands, which for many includes a commitment to help society, millennials won’t consider working there, Senne said.

This shift in values is fueled by the information revolution, Christian said, a viewpoint echoed by other panelists. Young people have become more aware about the social cost of producing food and other goods, he said, and therefore are more demanding of the companies that make these everyday products.

3) Adapting conscious capitalism is a matter of survival, not just a marketing strategy. “This isn’t altruism – this is self-preservation as well,” said Senne. “Companies are under threat. And I think that you will see that the evolution of companies and their lifespans will diminish if they don’t figure out how to manage these issues.”

As an example, Senne discussed Unilever’s acquisition of Ben & Jerry’s eco-friendly ice cream company in 2001 and how the Ben & Jerry’s ethos influenced Unilever’s subsequent evolution to its current standing, where it is considering becoming a B corporation.

York Day said that companies must be committed to growing their social programs; those that market themselves as conscious capitalists without going through with the day-to-day practices will not succeed. “Government’s not going to do it,” she said. “We are in a really critical time with trust. And corporate responsibility is going to play hugely into that in the future, of filling that gap.”

Offering a specific example of progress, Christian detailed a ten-year plan he wrote for Chicago’s Field Museum of Natural History that was part of their request for proposal when they decided to hire a new food service provider. Aramark, one of the largest food service companies in the world, won the bid – and for the first two and a half years of their contract, they failed every audit Christian conducted. Aramark had already sunk $1.5 million in their two museum restaurants, Christian said, and after going through three chef and general manager teams, they complied with his plan.

“And now these two restaurants in this big museum in Chicago are heading quickly toward being one of the greenest, most sustainable food service operations in a cultural institution in America,” Christian said, “and they’re still hitting their profits, and their scratching their heads like, ‘Wait a minute – this wasn’t that hard.’ It was just new for them.”

4) Conscious capitalism will be vulnerable to economic downturns, but the movement is here to stay. “Isn’t it possible that conscious capitalism is something that’s nice to have when profits are high, but when push comes to shove, it’s going to get shoved?” Ledbetter asked the panel in closing.

Senne speculated that a recession would “weed out the marketers,” but added that the companies that have a detailed, sound, socially responsible platform will remain committed. Based on his own experiences as a consultant, he said that many company employees, especially young adults, are devoted to conscious capitalism, and so are most of the legacy owners. It’s the middle managers who are most resistant to change, according to Senne, because they feel they have the most to lose if business practices change.

“I think that one of the things you do to change that mindset is to change the incentives,” he said. “And that’s where shareholder activism can start to make some headway. And consumer activism.”

All three panelists agreed that conscious capitalism is far from universally accepted. Senne stated that there are around 1,800 B corporations, and that many of the Fortune 500 companies are connected with the Global Reporting Initiative or similar organizations that enact socially progressive standards.

But there are millions of businesses in the world, he said, and added “Your values are only your values when they’re tough to apply. That’s the definition of character. Otherwise it’s just a bumper sticker on your corporate propaganda.”

“In a downturn, if conscious capitalism is built into a corporation’s strategy, if it’s truly built in and you’re not a poseur, then nobody questions a capital investment for a company during those down times,” York Day said. “If conscious capitalism is like a piece of machinery that’s going to make you more successful into the future, that might have a longer-term benefit. Until we think of it in those terms – then it’s not a luxury.” 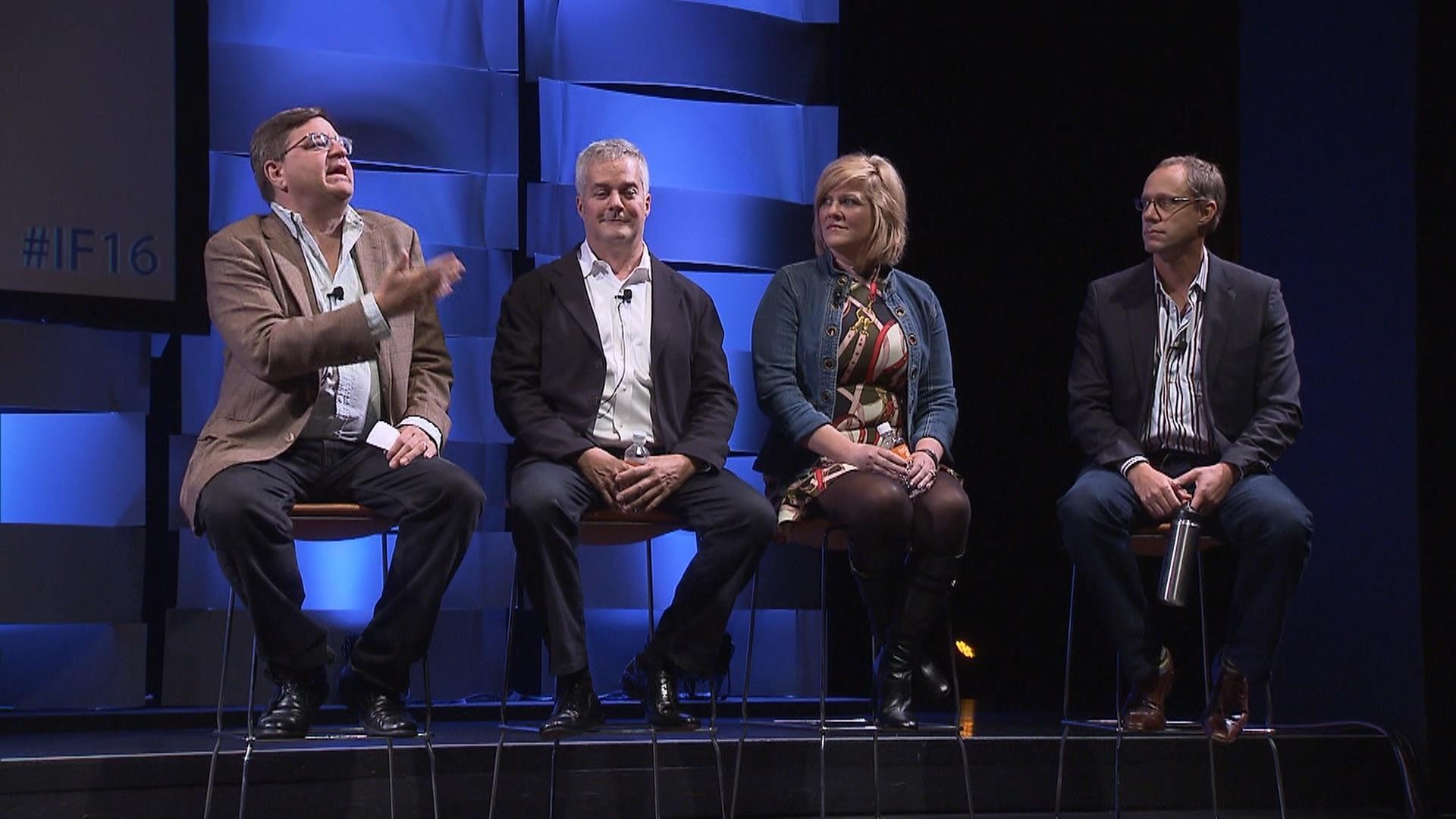