They met at a regional college in Western Kentucky, a somewhat unlikely place to form a successful pop vocal act. Two of them were native Kentuckians, and two came from western New York. They got together to cut a demo, which caught the ear of a record man from Tennessee. And the rest was history.

The Hilltoppers created a sound that defined romantic music for a generation of teenagers during the mid-1950s, scoring 21 Top 40 hits. Combining the lead vocal stylings of Jimmy Sacca  with rich harmonies and a clean-cut image, they rode the last wave of teen pop music to the top of the charts before the arrival of rock ‘n’ roll.

“There was a moment in time, between the big bands and between rock ‘n’ roll, where the Hilltoppers belonged, and they expressed the kinds of emotions that teenagers had at that time,” says Bobbie Ann Mason. Mason, the celebrated author of In Country, is a native of Mayfield in the Jackson Purchase region in far Western Kentucky. She founded the Hilltoppers Fan Club as a teenager.

Another famous Kentucky writer, Ed McClanahan, was in his twenties during the Hilltoppers’  heyday and wrote about the group’s popularity in his memoir, Famous People I Have Known. “They were the Beatles of their generation,” he says.

From the College Auditorium to Ed Sullivan
The Hilltoppers formed in 1952 on the campus of what was then called Western Kentucky State College in Bowling Green, and is now Western Kentucky University. Jimmy Sacca, Don McGuire, and Seymour Spiegelman were students singing in a barbershop vocal group, and Billy Vaughn, several years older, was a musician from nearby Glasgow.

Sacca, from Lockport, N.Y., and Spiegelman, from Seneca Falls, N.Y., were both at Western on scholarships. So too was McGuire, who was a star basketball player during high school on the other side of the state in Hazard. During his senior year, McGuire caught the eye of Western head basketball coach Ed Diddle, setting him on a path he could have never predicted.

“I was chosen to play in the Kentucky-Indiana high school all-star game,” McGuire recalls. “About the middle of the first quarter, Ed Diddle put me in the game. And somehow, I hit five straight shots. I don’t know how, I was scared to death. Later on, I hit some free throws. And if I hadn’t hit those shots, Mr. Diddle would have never offered me a scholarship. That’s how my life changed in eight minutes.”

Billy Vaughn had played in a band backing up Sacca in Bowling Green, and believed Sacca’s pure, romantic tenor was tailor-made for wider exposure. Vaughn enlisted Sacca, Spiegelman, and McGuire to join him in recording a song he had written, “Trying.” The group recorded it in the college’s Van Meter Auditorium, and according to McGuire, both his and Sacca’s future wives were present. “And to this day, at least a quarter of a million people claimed to have been there,” he says.

Randy Wood, who owned Dot Records in Gallatin, Tenn., heard “Trying,” signed the group, and pressed a single. Initial sales were not encouraging, so the Hilltoppers drove south to meet with Wood at his store. McGuire recalls what happened next:

“We’re sitting at his desk, and the phone rings, and the distributor from Cincinnati called, and he said, ‘I need 3,000 records of this black group that you have,’” he says. “Randy said, ‘Don’t tell them any different. Send them 3,000 records.’ An hour later, Cleveland called and said, ‘We need 6,000 records.’ We sat there and watched the record break, in Randy’s office.”

Other markets soon followed – St. Louis, Pittsburgh, and eventually the king of them all, New York. “Trying” made its way up the pop charts into Billboard’s Top Ten. The Bowling Green group had made the big time.

“I love the whole story behind ‘Trying.’ it’s just one of those classic pop miracles being in the right place at the right time,” says music journalist and historian Holly George-Warren. “That song ended up opening all of these doors for them.”

Within weeks, the Hilltoppers were booked on Ed Sullivan’s “The Toast of the Town,” where they performed “Trying.” According to McGuire, the group met with a choreographer before performing. “Well,” he recalls, “I didn’t know if they were going to fix my shoes or work on my teeth; we didn’t have a choreographer in Hazard, not a one.”

Romantic Voices of a Pre-Rock Era
Ann Sacca, Jimmy’s wife, says that most of the members of her hometown church in Mississippi skipped Sunday evening service to watch the Hilltoppers perform on Ed Sullivan’s show. The group would go on to appear on many other television programs just as the medium was gaining a mass audience throughout the country. “All of a sudden, we’re on the biggest shows in America,” says McGuire, recalling the whirlwind. “And your life changes.”

Despite several members serving stints in the military during the mid-1950s, the Hilltoppers fashioned a solid run on the pop charts, scoring with such odes to youthful romance as “To Be Alone” and “P.S. I Love You.” Jimmy Sacca’s distinctive lead voice and his charisma as a performer were the group’s calling cards throughout their most popular period, say McGuire and Ann Sacca, while Billy Vaughn was the main cog behind the scenes.

Add Spiegelman’s ringing tenor and McGuire’s bass into the mix, as well as an identifiable look with matching college sweatshirts and beanies, and the Hilltoppers embodied the innocence of the early postwar years for millions of teenagers.

“The Hilltoppers were part of that period in pop music that was very clean and wholesome, like Perry Como and Patti Page,” reflects Mason, who was friends with the group during her teenage years as fan club president. “And when Elvis came along, and Jerry Lee Lewis, Chuck Berry, any number of strong artists who were clearly sexual, and even raunchy, that was different, and it appealed to a different sensibility. And it kept growing.”

By the late 1950s, the Hilltoppers’ style of music was out of vogue for teen audiences, although Jimmy Sacca performed with various incarnations of the group until the late 1970s. Spiegelman, who worked in the music business as a record distributor, died in 1987; and Vaughn, who became an internationally renowned bandleader, died in 1991.

Jimmy Sacca worked as a talent booking agent after his performing career. He retired to Lexington and died last year. His wife, Ann, says that the Hilltoppers’ songs tie together generations of her own family and that she has seen the music make the same connections among others.

McGuire worked in real estate and with WKU in his post-Hilltopper years. He lives in Lexington with wife Maxine, who was present on that long ago day when the Hilltoppers’ chart-busting sound was born. McGuire feels that the music he and his friends made stands the test of time, and will always be cherished by those who found their first love while listening to the Hilltoppers.

“I like to think that even today, some gray-headed grandfather is sitting in the chair,” McGuire says, “and ‘P.S. I Love You’ comes on the radio, and he hollers and says, ‘Marge, they’re playing our song.’” 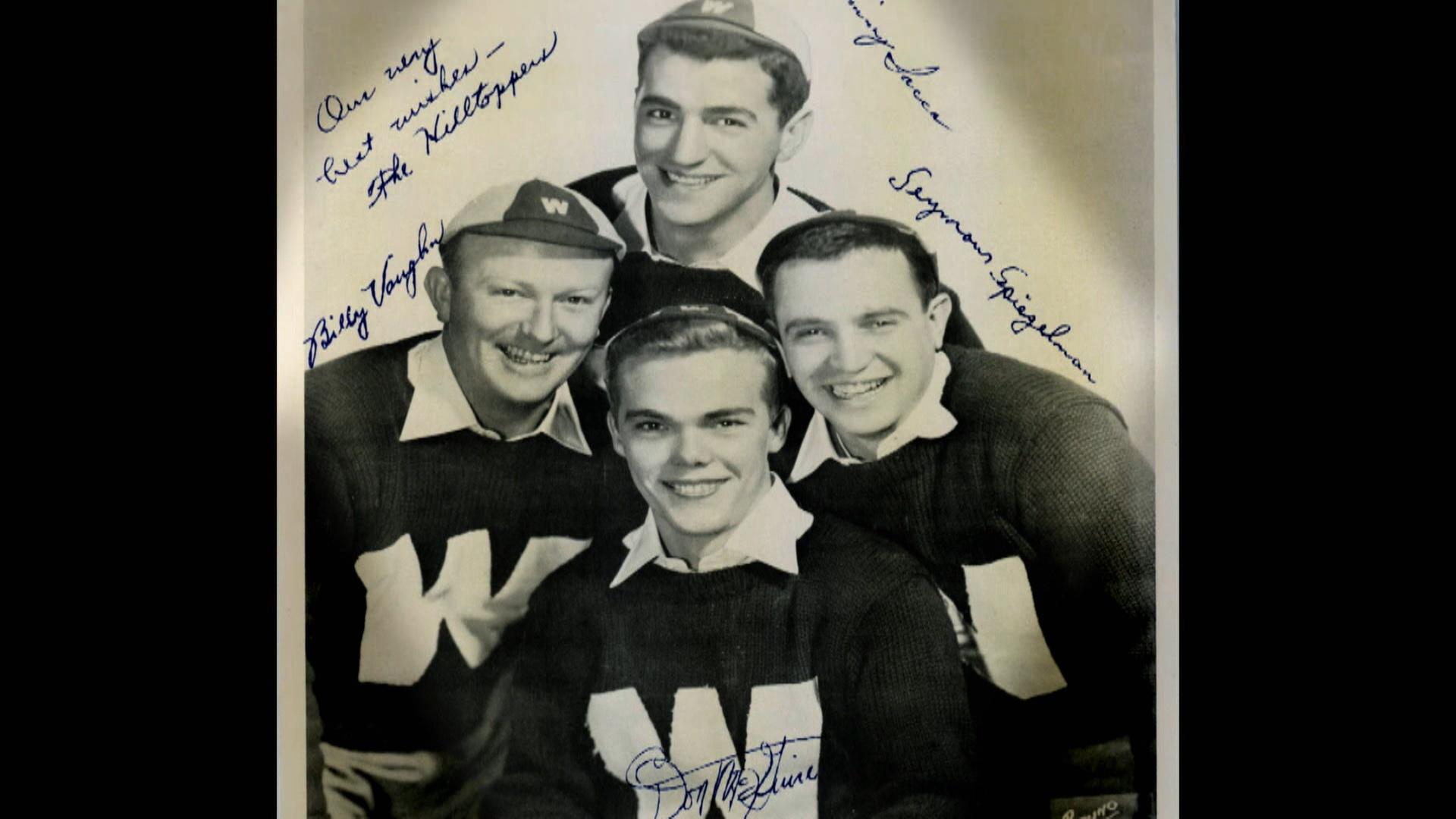