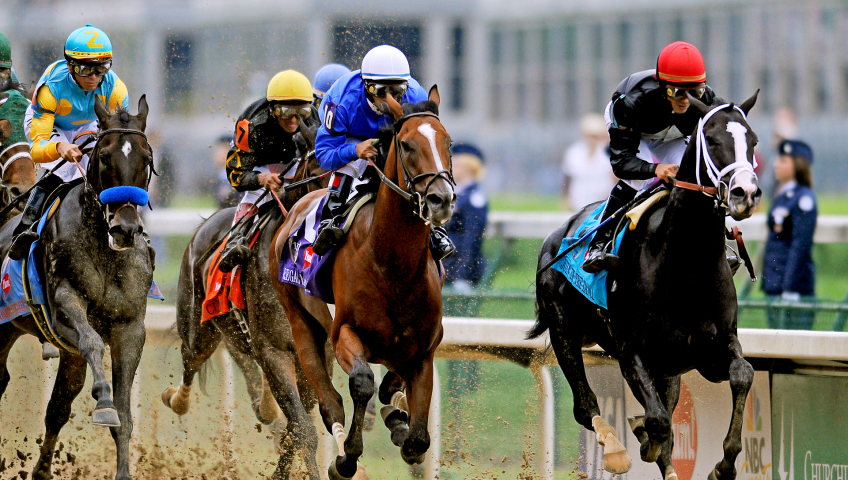 Enjoy these programs that look back through Derby history, celebrate some of the Derby’s favorite customs, and explore the special bond between horse and human that is at the heart of Thoroughbred racing.

In the years following the Civil War, African American jockeys dominated horseracing and won 15 of the first 28 runnings of the Kentucky Derby; the unsung heroes of the racetrack are the track ponies; created over 50 years ago as the specialty pastry of the Melrose Inn, the chocolate-nut pie from Kern’s Kitchen is the official Derby Pie; and women’s eye-catching hats are a Derby tradition.

I Dedicate This Ride

From his first ride in 1875 at the age of 14, until his death in 1896, Hall of Fame jockey Isaac Burns Murphy accrued more than 600 victories. Yet few outside of Thoroughbred racing know about Murphy’s legacy as not just the best African-American jockey but perhaps the greatest American jockey of all time. Historian Pellom McDaniels III is sharing Murphy’s story in “The Prince of Jockeys.”

Kentucky Life highlights Derby day. The career of Kentuckian Roscoe Goose who rode Donerail to victory in the 1913 Kentucky Derby; a look at Churchill Downs, which officially opened on May 17, 1875; the mint julep, the quintessential southern cocktail; and Zenyatta, the first filly ever to win the Breeders’ Cup Classic are featured.

Billy Reed interviews Mike Battaglia, who has been involved in thoroughbred racing in Kentucky for more than 40 years and is best known as the oddsmaker for the Kentucky Derby and a former track announcer and TV analyst.

The Kentucky Derby is the longest continually-held sporting event in America. On the first Saturday in May each year, you’ll find thousands watching America’s Greatest Race at Churchill Downs in Louisville, Kentucky — and millions more around the world watching on television. This episode of Social Studies Shorts explores the history and traditions surrounding Kentucky’s most famous thoroughbred horse race.

Some are tasteful, some are fashionable, and some are completely over-the-top. They’re Derby hats, and they’re an iconic part of Kentucky Derby Day.

No Kentucky Derby celebration is complete without a mint julep. The boozy concoction has been around since the 1700s when it was touted as a medicinal drink. Joy Perrine, bar manager at Equus and Jack’s Lounge in Louisville, is a legend in the bourbon industry and shares some advice on making the perfect mint julep.

Ken Grayson has been a thoroughbred racing fan for more than 50 years. Kentucky Life got a look at his extensive collection of horse racing memorabilia, which chronicles the sport’s history in America.

Kentuckian Jaime Corum combines her love of horses and passion for painting in her career as an equine artist. Her talent has taken her to the stalls of equine royalty and made her well known in the thoroughbred industry.

A trip to Margaux Farm in Woodford County explores what makes the Bluegrass region so good for raising horses and other livestock, what a farrier does, what a typical day on a horse farm is like, how a veterinarian knows that a mare is in foal, and a little about the breeding of thoroughbreds.

The story of a racehorse named Lexington (1850-1875), the most famous Thoroughbred in the country in the 1800s. Lexington won six of his seven races before he had to retire in 1855 due to failing eyesight.

In 2015, Kentucky Life visited Georgetown’s Old Friends, a retirement home for legendary thoroughbred racehorses. That year War Emblem, the winner of the Kentucky Derby and Preakness Stakes in 2002, came to live at Old Friends alongside some other past Triple Crown contenders.

Legendary racehorse Zenyatta spent most of her career based on the west coast, but she was a Kentucky-born filly and is retired here now as a broodmare at Lane’s End Farm in Versailles.