KET documentary explores the founding of the Frontier Nursing Service

KET documentary explores the founding of the Frontier Nursing Service

In 1925, a team of spirited nurse-midwives from across the globe came to the mountains of Leslie County, Kentucky, to help provide healthcare. Their efforts markedly improved the population’s maternal and infant mortality rates to be among the lowest in the nation.

Angels on Horseback: Midwives in the Mountains, a new KET film narrated by Ashley Judd, recounts the remarkable story of the women of the Frontier Nursing Service that established professional midwifery in America during one of the most challenging times in the nation’s history.  Their legacy reverberates today as nurse-midwives and nurse-practitioners continue to provide care to underserved communities worldwide.

Angels on Horseback: Midwives in the Mountains premieres Monday, Oct. 11, at 9/8 pm on KET and Wednesday, Oct. 13, at 7/6 pm on KET2. The documentary, which will be distributed nationally by PBS to member stations, also will be available for streaming at KET.org and on the PBS Video app.

Born in 1881 to a prominent Confederate family, Mary Carson Breckinridge was first introduced to midwifery at a young age when a Russian midwife delivered her brother while the family lived abroad in St. Petersburg, Russia. Widowed in her first marriage, Breckinridge found solace in training as a nurse in New York City. She later remarried and had two children: a daughter, Polly, was born prematurely and died six hours after birth; and a son, Breckie, died at age four.

Escaping her grief, Mary volunteered with a relief organization serving in post-World War I France. While working as a nurse and administrator abroad, she had the realization that, “In France midwives were not nurses. In America nurses were not midwives. In England trained women were both nurses and midwives. It grew upon me that nurse-midwifery was the logical response to the needs of the young child in rural America.” (Wide Neighborhoods, A Story of the Frontier Nursing Service, Mary Breckinridge, The University Press of Kentucky)

The Frontier Nursing Service was founded on May 28, 1925 (then called Kentucky Committee for Mothers & Babies). Breckinridge used her own inheritance to kickstart the demonstration, hoping the results would draw government interest and funding. The government backing never materialized. Instead, she relied on donations from friends and acquaintances to sustain the Frontier Nursing Service, even throughout the Great Depression.

Angels on Horseback: Midwives in the Mountains is a KET production, produced by Chelsea Gorham and Matt Grimm. The program is funded in part by The KET Endowment for Kentucky Productions.

KET is Kentucky’s largest classroom, where learning comes to life for more than one million people each week via television, online and mobile. Learn more about Kentucky’s preeminent public media organization at KET.org, on Twitter @KET and at facebook.com/KET.

Angels on Horseback: Midwives in the MountainsDownload

Angels on Horseback: Midwives in the Mountains 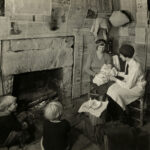 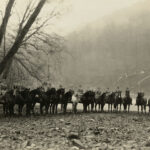 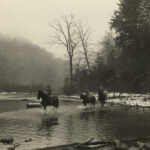