The program examines effective medications and behavioral strategies available today to help tobacco users give up smoking for good and improve their health. Part of KET's ongoing Smoking Cessation initiative funded in part by the Foundation for a Healthy Kentucky.
Length 28:42 Premiere: 12/18/17

In 1964, U.S. Surgeon General Dr. Luther Terry released the first report on smoking’s dangerous health effects. Since then, smoking rates have declined in the U.S. to the current rate of around 15 percent – but in certain states, smoking rates are considerably higher. Kentucky is one of those states, as its current rate of tobacco use sits at 24.5 percent, contributing to the commonwealth’s high incidence rates for lung cancer, cardiovascular disease, respiratory diseases, and other maladies.

Smoking’s destructive impact on the health of Kentuckians can be measured by statistics – nearly 9,000 deaths per year are due to tobacco-related causes – but also by countless personal stories. Some speak of how a family member grew ill and perished from a disease caused by cigarette smoking, while others who smoke themselves observe how the habit has come to control their daily lives.

But there are many effective and accessible options for people in Kentucky who want to end their smoking addiction. In spring 2017, the state legislature enacted Senate Bill 86, which mandates any insurance plan offered in Kentucky to cover all tobacco cessation medications and services approved or recommended by the federal Food and Drug Administration.

In Calling It Quits: Real Help to Stop Smoking, KET presents an overview of these evidence-based services and interviews several tobacco control experts who explain how receiving nicotine from cigarettes leads to a chronic addiction. We also learn about how these medical professionals and advocates are working to provide smokers with the resources and support they need to quit for good and improve their health. This program is funded in part by a grant from the Foundation for a Healthy Kentucky.

Judy Baker started smoking until around age 30, when a friend recommended lighting up while behind the wheel to stay awake since her job at the time required a lot of driving. Soon, she became addicted, and despite several subsequent attempts, Baker has yet to end the habit.

Currently, she works at the Kentucky Department for Medicaid Services as part of a team focusing on reducing tobacco use in the commonwealth. “When you’re working on tobacco cessation and you’re a smoker, you feel like a really big hypocrite,” Baker says, but adds, “Whatever I can do to either help someone quit, or make it to where nobody else starts, I’m all in.”

“The reality is that tobacco dependence is an addiction to nicotine,” says Audrey Darville, PhD, APRN, a tobacco treatment specialist with University of Kentucky HealthCare. “And about 5 out of 100 people can quit what we call ‘cold turkey,’ without help, but 95 out of 100 people need some help.”

The nicotine delivered by cigarettes or smokeless tobacco works by attaching to receptors in the brain, says Darville. It produces an immediate kick and releases the chemical dopamine, which controls the brain’s reward and pleasure centers.

“This is good, this is helping my stress, this is calming me,” says Darville, describing the sensation. “But the reality is, when that goes out of the brain in 20 or 30 minutes, people start having nicotine withdrawal. And the nicotine withdrawal causes stress-like symptoms.”

Dr. John Gregory Cooper, MD, is a family physician in Cynthiana. He’s seen far too many of his patients through the years develop terminal diseases due to tobacco addiction, and thus feels that his role in educating and supporting patients as they try to stop using tobacco is just as important as his duty to treat their condition. In recent years, he’s seen more patients express an interest in quitting tobacco – a positive trend to say the least.

According to Darville, there are seven evidence-based medications that tobacco treatment specialists consider as first-line therapies. Three nicotine replacement options can be purchased over the counter: the nicotine patch, nicotine gum, and nicotine lozenges. Two other replacement products are available with a prescription: a nicotine inhaler and a nasal spray.

“The other two options are pills, medications,” says Darville. They are buproprion (known as Zyban or Wellbutrin) and varenicline (known as Chantix). Buproprion is an anti-depressant medicine that is best used with a nicotine replacement device such as a patch or inhaler.

Varenicline “sort of acts like nicotine replacement, and so people don’t experience nicotine withdrawal,” Darville says. “And it also blocks the pleasure or the enjoyment of smoking.” These products are effective in reducing the feelings of irritability that often arise when one tries to quit smoking cold turkey," says Darville. For many people, the medications work even better when coupled with counseling.

In Russell County, Shirley Roberson Daulton from the Lake Cumberland District Health Dept. and Teresa Spaw from the Russell County Hospital supervise a popular Freedom From Smoking class. Daulton and Spaw have over 30 years of combined experience as counselors, and Spaw is recovering from a diagnosis of lung cancer in 2010, which required having her left lung removed. She smoked for 20 years before quitting in 2002.

Daulton and Spaw’s Freedom From Smoking class is taught in eight-week sessions, and it combines group discussion with nicotine replacement products. Daulton says that in order for the classes to work, participants must first be aware that they have a problem. Then, the support system kicks in.

Kentucky’s Quit Line (1-800-QUIT-NOW, www.quitnowkentucky.org) is a telephone counseling service that provides one-on-one advice and support. It is operated through a call center that also serves 15 other states, located at National Jewish Health in Denver, one of the nation’s leading respiratory hospitals.

At the call center, counselors are trained to use a patient-first, welcoming approach to help persuade callers to commit to four or five coaching sessions in total. Many people who call in have mixed feelings about quitting, and this is normal, says Amy Lukowski, PsyD, TTS, a licensed psychologist and clinical advisor with National Jewish Health.

“I think the biggest common misconception about the Quit Line I hear is, ‘I have to be ready to quit to utilize the Quit Line,’” Lukowski says. “That is just not the truth. The majority of the participants that we work with are really ambivalent about quitting. They want to quit and they don’t want to quit, all at the same time.

Lukowski says that quit outcomes at the center range at around 37 percent, compared with the industry standard of 30 percent. However, she notes that the Quit Line is underutilized in Kentucky, as only 1 to 2 percent of tobacco users in the commonwealth access the service.

Dr. Darville conducts one-on-one personal counseling at UK HealthCare, usually with patients who have an illness related to their tobacco use. She is cognizant of how ingrained both smoking and tobacco chewing are within many Kentucky families and communities, where people often start smoking as children or teenagers. Trying to give up a stress-reducing companion of many decades is scary, Darville says, and people often try practice runs and go through several failed attempts before succeeding. Still, she and other medical professionals are committed to reversing Kentucky’s high tobacco use rates one patient at a time, as doing so is an absolute necessity for personal and public health.

“We know that the single most important thing a person can do for their health in their lifetime, if they use tobacco, is to quit,” she says. “It makes the biggest difference. Some studies say 6 out of 10 people who use tobacco eventually die of an illness that could have been prevented, and for me that’s the key. Why aren’t we doing more?”

Judy Baker is also committed to ultimately quitting smoking – for herself but also for her two godchildren, who are her biggest supporters.

“I do realize that it’s probably going to be a struggle for a very long time. It really is hard,” she says. “You’ve got to celebrate the small milestones, and realize that even if you do have a setback, and sometimes they’re going to come, you’ve got to get back and try to quit…. You have to find something that’s more important to you than smoking that cigarette in order for you to sustain your quit attempt, and for me, it’s my godchildren.”

About Calling it Quits

The program examines effective medications and behavioral strategies available today to help tobacco users give up smoking for good and improve their health. Part of KET's ongoing Smoking Cessation initiative funded in part by the Foundation for a Healthy Kentucky. 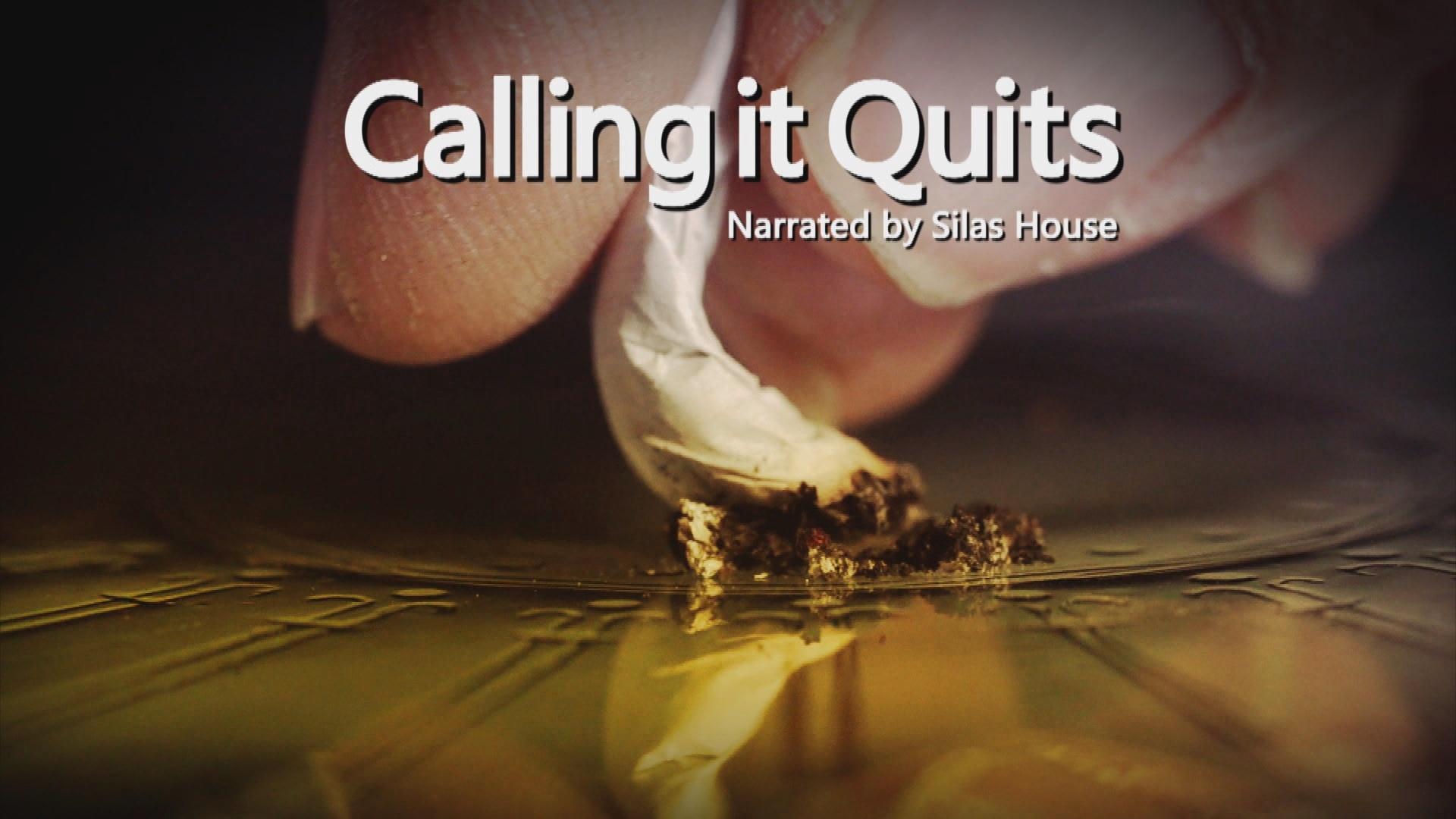