In this segment, viewers travel to Clinton County in South Central Kentucky to learn how the community came together to address poor health outcomes among residents.

Like many rural counties in Kentucky, Clinton County has a tight-knit sense of community. The county, located in south central Kentucky between Lake Cumberland and the Kentucky-Tennessee state line, is one of those places where, as Mayor Nicky Smith says, “If you meet somebody, somebody’s going to wave at you –  if you’re a stranger or not, they’re going to throw a hand up.”

That civic pride led public officials and area leaders to join forces and address a worrisome fact about Clinton County: it ranks 100th among 120 Kentucky counties in public health.

“We recognize that, we saw that in our kids,” says Lora Brewington, Chief Compliance Officer of Cumberland Family Medical Center Inc. “And if we don’t change something now, we’re going to be going to the funeral home for kids a lot younger.”

The Clinton County Healthy Hometown Coalition was formed to devise and implement a multi-faceted public health program for the county’s citizens, and primarily its children. It will take time to change ingrained habits, but coalition leaders have seen encouraging signs that the program is working.

“The coalition came together [according to] Aristotle’s thinking, that the whole is greater than the sum of its parts,” says Brewington. “We have a lot of great groups, that do a lot of great things, but if everyone is going for that same goal, and the resources are not combined, you’re not going to accomplish anything. And once we get everybody together and on the same page, by combining resources, we’ve been able to do some great things.”

Many of the coalition’s activities are school-based. Teachers have incorporated physical activity into the school day through a program called “Take 10.” The program adds movement and exercise to school lesson plans.

According to Paula Little, PhD., Assistant Superintendent and Supervisor of Instruction at the Clinton County School District, “There are many different ways you can put activity in the classroom, and research has shown that’s not only good for the child’s body, but it also improves their mind and improves their academic learning.”

School officials have also added exercise to their morning routines and after-school day care programs, leading games that get kids out of their seats and moving around.

The Bus Stop Café
The coalition addresses diet by emphasizing nutrition in the school meal plans. Georgia Rigney, Food Service Director at Clinton County Schools, says that the cafeteria offers several different kinds of fruits and vegetables every day and in every meal. Clinton County Schools also began offering supper to students beginning last October. Rigney says that over 6,400 dinners were served during the school year.

Since many of Clinton County’s children live in low-income families, Healthy Hometown leaders felt that even more needed to be done. So they launched a summer food program delivered by a retrofitted school bus called the Bus Stop Café.

“What we try to do with our mobile bus is figure out which area of our county has the most students gathered in one location, and then we get the bus to that location,” says Rigney.

The Bus Stop Café serves both breakfast and lunch during the summer.

“It’s about accessibility,” Brewington says. “It’s about the kid who has a cough and has to see a doctor, but the parent can’t take off from work.”

It’s all part of a comprehensive plan to make a healthy lifestyle the normal lifestyle for Clinton Countians. “When you’re attempting to change a culture, and change the way people live, that’s a very long process,” says Little. “And it has to be something that’s consistent, that’s ongoing, and it has to be a message that children hear everywhere they go in the community.”

The coalition hired a full-time coordinator, April Speck, who manages the various programs and writes a weekly column in the local paper that examines health-related topics and celebrates individual success stories.

They also sponsor community events outside of school throughout the year, and led a major expansion and upgrade of the playground at Mountain View Recreational Park in Albany. According to Little, the playground’s construction was aided by over 50 volunteers, all of them committed to creating a new destination for children and families to congregate and have fun.

“What makes me feel good about it is, that I know there’s a real need here,” Speck says. “There’s a lot of kids who have childhood obesity, there’s a lot of kids who have high BMIs here, because I’ve done the BMI [testing] myself. And just, seeing them start to make changes in what they are doing, how much they are eating, their water intake, I know that we’re making an improvement.”

This KET production is funded in part by the Foundation for a Healthy Kentucky. 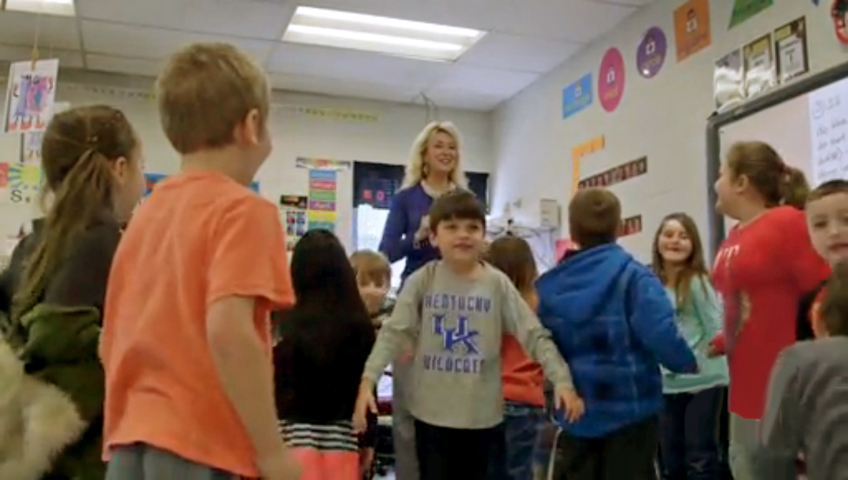