Journalists from around the state discuss news of the week with host Bill Bryant, including a vote by members of the Lexington Urban Co. Council to remove two Confederate statues from the city's downtown area. Scheduled guests: Jack Brammer from the Lexington Herald-Leader; Lawrence Smith from WDRB-TV in Louisville; and Kevin Wheatley from Pure Politics on Spectrum News.
S43 E40 Length 26:32 Premiere: 8.18.17

As the furor continues over President Trump’s remarks about the violence in Charlottesville, Va., civic leaders across the nation are debating what to do with Confederate monuments in their communities. According to a report from the Southern Poverty Law Center, there are 41 such monuments on public property in the commonwealth.

The journalists on KET’s Comment on Kentucky reviewed discussions underway in Lexington, Louisville, and Frankfort about statues honoring Confederate soldiers. They also offered updates on the public pension crisis and the lawsuit over Gov. Matt Bevin’s restructuring of the University of Louisville Board of Trustees.
&nbsp:

The Battle over Monuments
Following the violence that erupted in Charlottesville over the removal of a statue of Robert E. Lee, Lexington Mayor Jim Gray accelerated his plans to relocate two Confederate memorials in his city. Jack Brammer of the Lexington Herald-Leader says the Urban-County Council voted unanimously on Thursday to remove statues of Confederate officers John Hunt Morgan and John C. Breckinridge from the old county courthouse grounds.

Gray has 30 days to propose a new location for the monuments, but that doesn’t guarantee they will be moved. Brammer says the Kentucky Military Heritage Commission must approve the plan, and that group isn’t scheduled to meet until November.

Following the 2015 shootings of black worshipers at a Charleston, S.C., church, activists in Kentucky called for the removal of Confederate monuments in Lexington, as well as in Louisville and Frankfort. Brammer says Matt Bevin, who was the Republican nominee for governor at the time, said the state should remove a statue of Confederate States President Jefferson Davis from the Capitol Rotunda.

But last week Bevin seemed to backtrack from that position. While condemning hatred and bigotry, the governor now says removal of any Confederate monuments should follow a proper process, according to Lawrence Smith of WDRB-TV in Louisville. Smith says that may not satisfy some Kentuckians who have raw emotions over the issue and are looking to elected officials for moral leadership.

A bipartisan group of politicians and activists gathered in the state capitol on Wednesday to renew the call to remove the Davis statue from the rotunda. Kevin Wheatley of Spectrum News says Sen. Wil Schroder (R-Wilder) was among those who endorsed getting rid of the statue. Schroder said he didn’t want to have to explain to his biracial nephews why the slave owner was being honored there.

Smith says other Republicans, including state Treasurer Allison Ball and former Secretary of State Trey Grayson, also want the Davis statue removed, but so far Lt. Gov. Jenean Hampton, the first African-American elected to statewide office in Kentucky, has been silent on the issue.

Last year city leaders in Louisville voted to relocate a monument honoring Confederate war dead. Smith says the obelisk that stood for decades near the University of Louisville campus was moved to Brandenburg, where it now commemorates where Confederate General John Hunt Morgan and his raiders crossed the Ohio River into Indiana.

Smith says many of the state’s Civil War monuments were erected in the early 20th century and coincide with the genesis of the “Lost Cause” mythology about the Confederacy and the rise of Jim Crow segregation laws.

State Pension Update
The state has launched a new website to update Kentuckians about efforts to address the public pension crisis in the commonwealth. Wheatley says Kentuckypensions.com is designed to communicate the gravity of the funding problems facing the systems.

According to the website, the public employee and teacher plans have a combined unfunded liability of $64 billion. But Wheatley says some analysts believe that number is vastly overstated. For example, Wheatley says Moody’s Investors Service recently put the debts at $37 billion.

House Speaker Jeff Hoover (R-Jamestown) had planned to convene representatives to discuss the issue ahead of a special legislative session that Gov. Bevin is expected to call this fall. But Smith says that meeting has been cancelled.

The governor and legislative leaders released a video to assure state employees and retirees that the pension systems will be saved. Brammer says that video also included a plea to current workers not to accelerate their retirement plans. The fear is that thousands of teachers, police officers, and other state employees who are eligible for retirement now may go ahead and do so to secure the benefits they’ve been promised.

Wheatley says some lawmakers are discussing whether sick days are part of the benefits protected by the inviolable contract with employees. Some workers accumulate sick days so as to boost their income in their final year of employment. Wheatley says Senate Budget Chair Chris McDaniel (R-Taylor Mill) believes any benefit changes lawmakers attempt to make to the plans will wind up in court.

Court Hears Trustee Reorganization Case
The Kentucky Supreme Court heard oral arguments on Friday in a lawsuit challenging Gov. Bevin’s authority to reorganize state university governing boards. Wheatley says Attorney General Andy Beshear sued the governor in 2016 after Bevin abolished the sitting University of Louisville Board of Trustees and later recreated it with new members. Beshear contends the governor did not have the authority to execute such a restructuring.

The attorney general, a Democrat, argues that the matter should be decided based on the laws on the books at that time, according to Smith. In September, Franklin Circuit Judge Phillip Shepherd struck down Bevin’s move and ordered the original board be reinstated. In January state legislators approved a bill that validated the governor’s action.

Other News
State officials have activated Kentucky’s Emergency Operations Center to help deal with any problems surrounding today’s solar eclipse. Smith says Hopkinsville and other communities along the path of totality are expecting visitors from 46 states and 19 countries. Brammer says state resort parks in the region have doubled their room rates for the event.

State Sen. Reggie Thomas, the other Democrat who has filed for the race, continues his listening tour across the district. Wheately says there’s speculation that Lexington Mayor Jim Gray could also enter that Democratic primary. He says Gray could parlay the national attention he’s received on the Confederate statue issue into a run for Congress in 2018 or for governor in 2019.

The Fayette Circuit Court has sided with the University of Kentucky in a case regarding records of sexual harassment involving teachers. Wheatley says the UK student newspaper requested the records as part of an investigation into sexual harassment allegations on campus. When the university denied that open-records request, Attorney General Andy Beshear intervened, saying his office should review the pertinent documents to assess whether they meet the criteria for remaining private.

UK denied Beshear’s request, and the court upheld that decision. Wheatley says Beshear plans to appeal the ruling, which could impact open-records requests made by the media in the future. 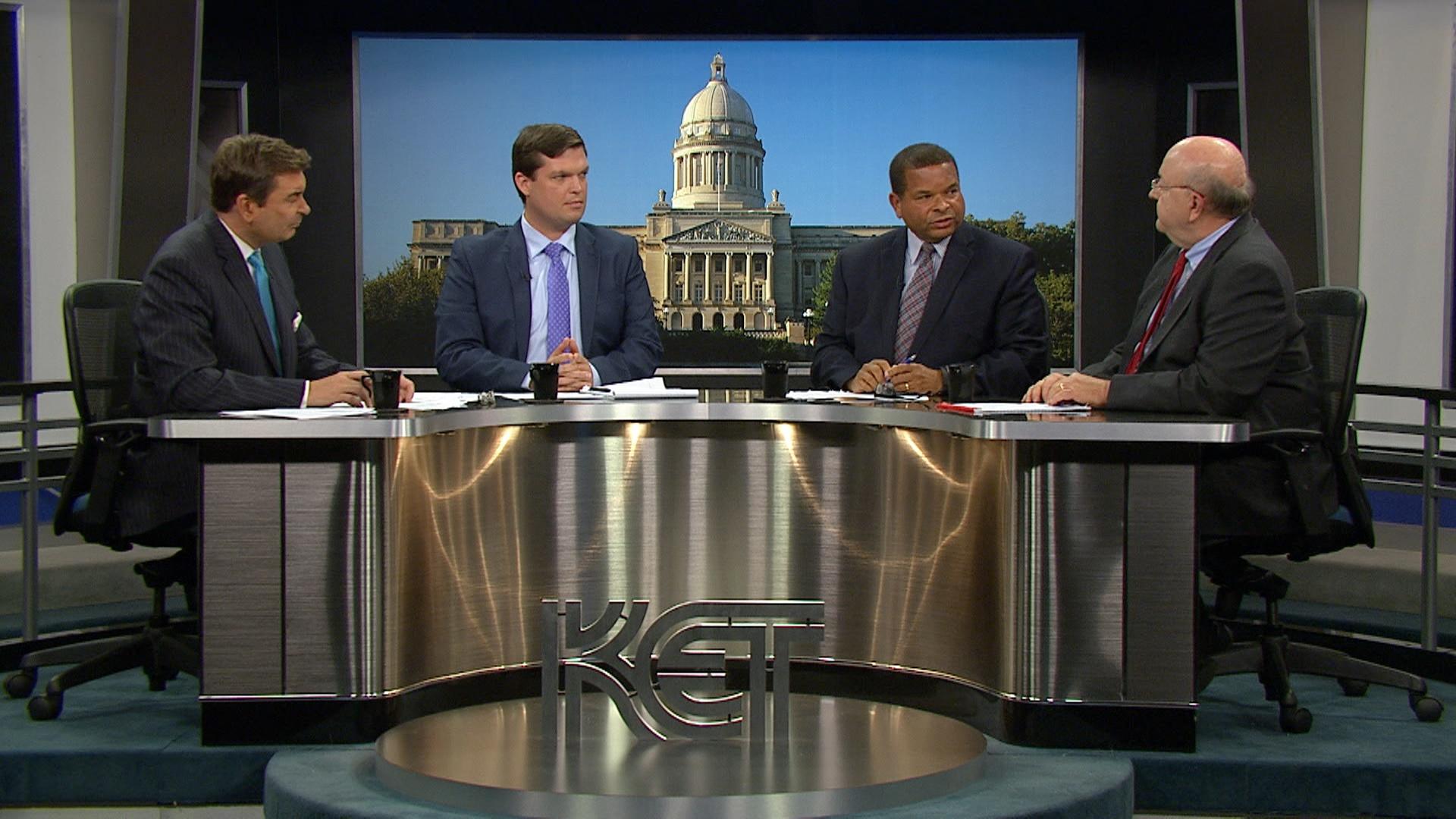