Bill Bryant and a panel of journalists discuss the week's news from the commonwealth. Guests: John Cheves from the Lexington Herald-Leader; Chris Otts from WDRB-TV in Louisville; and Kevin Wheatley from cn|2.
S42 E42 Length 26:32 Premiere: 8.19.16

Meanwhile two separate boards of trustees await a judge’s decision about which group can legally oversee the University of Louisville.

The journalists on Comment on Kentucky discussed those and other stories in last week’s news.

Justices Hear University Funding Case
John Cheves of the Lexington Herald-Leader says the issues in the university funding suit revolve around whether a governor can reduce spending in the middle of a fiscal year when there is no budget shortfall and whether a governor has the authority to change funding levels set by legislators.

In April, Bevin ordered a 4.5 percent cut to that fiscal year’s allotment to the state universities. That amount was later reduced to 2 percent, or about $18 million. Attorney General Andy Beshear challenged Bevin’s action, saying it wasn’t legal or necessary since the state ended last fiscal year with a budget surplus. In May, Franklin Circuit Court Judge Thomas Wingate upheld the governor’s cut. Beshear appealed that ruling, and the Supreme Court agreed to hear the case.

Cheves says Beshear argued on Thursday that the state ended fiscal year 2016 with a $50 million surplus. Bevin’s attorney countered that the state faces a serious fiscal crisis given a $35 billion public pension shortfall. Cheves says the justices don’t want to micro-manage university funding, but they’re also keenly aware of the precedent Bevin’s action could set, especially for lawmakers who want to protect their budgetary authority.

Kevin Wheatley of cn|2 notes that the $18 million in question was withheld from the universities following Bevin’s order. He says Beshear’s office and the governor agreed to set aside those dollars until the legal challenge is resolved. Wheatley says that depending on the outcome, the funding will either be sent to the schools or revert back to the state’s general fund.

Battle of the Boards
The matter of which board should govern the University of Louisville remains unresolved. Chris Otts of WDRB-TV in Louisville says Gov. Bevin told a local radio station that his new trustees should conduct business despite a recent court order putting that group on hold. Otts reports that the governor’s office later clarified that statement to say that Bevin does believe in upholding the law, but that he thinks Franklin Circuit Judge Phillip Shepherd misapplied the law in this case.

In mid-June, Bevin ousted the existing U of L board and replaced it with a smaller group of trustees of his own choosing. Attorney General Beshear challenged Bevin’s authority to restructure the group, and while that case is being decided, Judge Shepherd reinstated the previous board. Otts says Bevin had criticized the old trustees for a lack of action on key issues, but Shepherd argued that disagreement among board members is not the same as dysfunction. The governor’s office has appealed Shepherd’s injunction.

Neither the old nor the new board has approved a budget for this fiscal year. Otts says the university is operating under a spending plan instituted by former President James Ramsey that levied a 5 percent tuition increase on students. Otts says depending how the lawsuit plays out, the school could have to reimburse that money to students.

Judge Shepherd is set to hear motions in the case in early October. Regardless of Shepherd’s final ruling, Otts says the suit is destined for the state Supreme Court.

Other Bevin Administration Actions
As state officials finish their revision of the governor’s Medicaid overhaul plan, one group is expressing concern about a work requirement in the proposal. John Cheves reports that the Kentucky Nonprofit Network says representatives from their member organizations fear they may be overwhelmed with volunteers under the work mandate. The proposal requires able-bodied adults on Medicaid to have a job, be enrolled in school or a job-training program, or volunteer for a local church, school or community group.

Cheves says many smaller nonprofits don’t have the capacity to train and manage volunteers. Plus, those entities that work with children or the elderly require background checks on volunteers. Cheves says the governor’s office stated that no organizations will be required to take on volunteers they don’t want.

Some Democratic state lawmakers tried to block Bevin from giving a $500,000 contract to an Indianapolis law firm to investigate alleged corruption in the administration of former Gov. Steve Beshear. Kevin Wheatley says the Democrats were concerned that the hourly rate for Taft Stettinius & Hollister was twice the usual rate for outside attorneys under state contract. The Democrats also argued that the firm provides legal counsel to the Republican Party of Kentucky and a super PAC backing GOP candidates for the state House. Wheatley says the move to halt the contract was unsuccessful.

The former head of the state’s Alcoholic Beverage Control department has retained a lawyer to review his dismissal. John Cheves says that non-merit appointee Steven Edwards was terminated and escorted from the building on Aug. 5. Then last week, Gov. Bevin issued an executive order questioning Edwards’ performance. Cheves says that it’s puzzling why Bevin went out of his way to attack Edwards, especially if it could lead to a potential lawsuit.

Political Headlines
In a bid to flip the state House to GOP control, the Republican Party is running campaign ads that target House Democratic leadership. Wheatley says the spots will air in the home districts of House Speaker Greg Stumbo (D-Prestonsburg) and Majority Floor Leader Rocky Adkins (D-Sandy Hook). He says the ads tie Stumbo and Adkins to national Democratic leaders and their policies on the coal industry.

Two state officeholders are getting a taste for presidential politics. Wheatley says Kentucky Agriculture Commissioner Ryan Quarles is one of 60 farming experts advising the campaign of Republican Donald Trump, while Kentucky Secretary of State Alison Lundergan Grimes recently traveled to Iowa to speak on behalf of Democratic nominee Hillary Clinton. 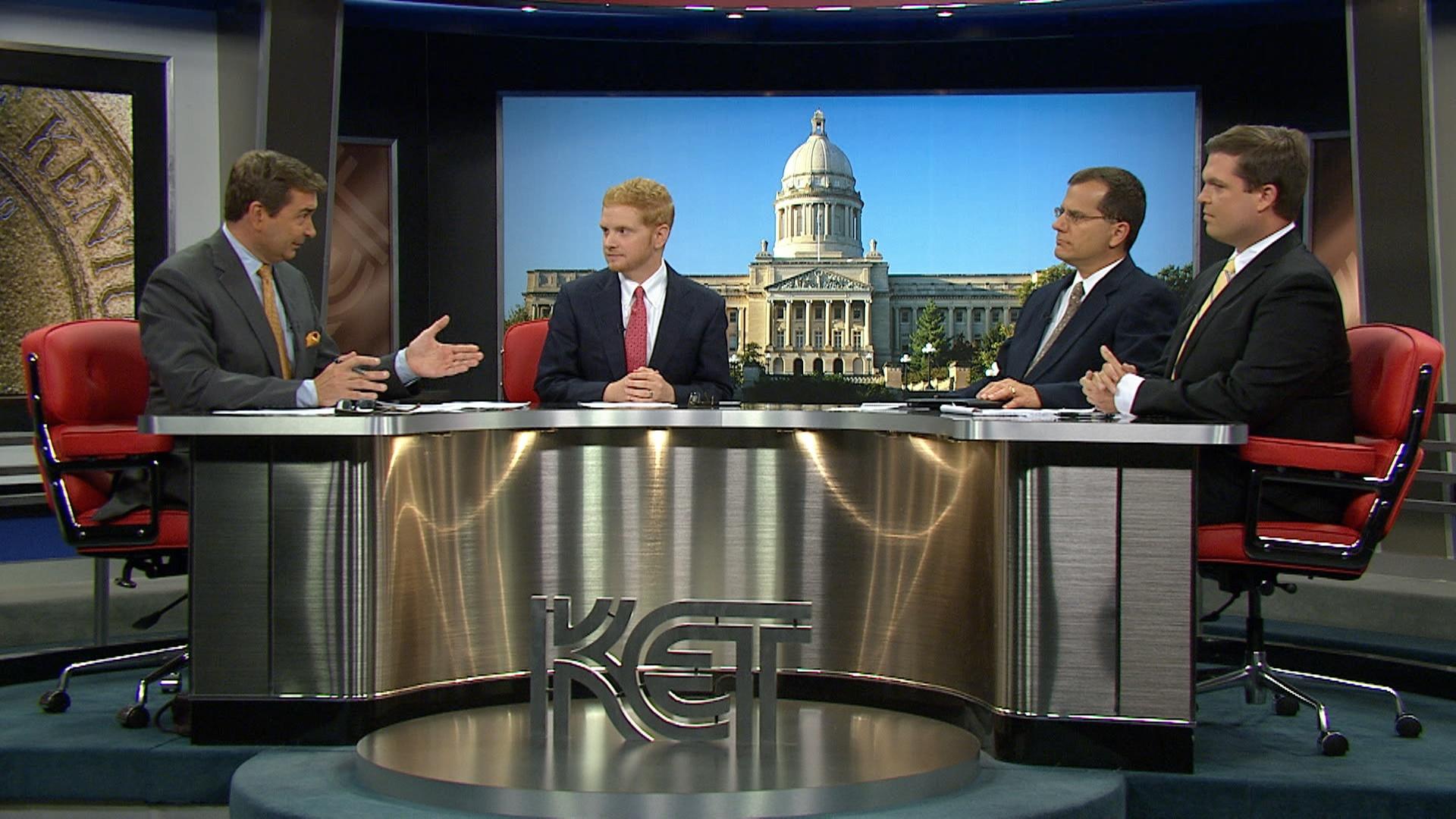