In his State of the Commonwealth address earlier this year, Gov. Matt Bevin said Kentucky must find more money to pay off billions in unfunded public pension liabilities. But last week he said he does not favor increasing taxes to do it.

The journalists on KET’s Comment on Kentucky explored what those messages may mean for the special session on tax and pension reform the governor is expected to call later this year. They also discussed the latest on the federal health care legislation, the drug addiction crisis and other stories in the week’s news.

Taxes and Pensions
The pension liabilities coupled with a reluctance among Frankfort Republicans to raise taxes has state workers worried about their benefits. Tom Loftus of the Courier-Journal says current and retired public employees and school teachers have appeared before the pension oversight board to voice their concern about the benefits that were promised to them.

Loftus says many benefits for people already in the retirement system are guaranteed under an inviolable contract. But he says some benefits not covered by that contract could be changed or eliminated. Lawmakers could also change any benefits that would be offered to future employees, he says.

In February, Gov. Bevin warned legislators that his tax reform plan would be a difficult vote. Loftus says the governor even told lawmakers he would take the blame for an unpopular proposal. Bevin has yet to reveal any details about his reform plan, and has said he won’t call a special legislative before Aug. 15. The governor says benefit checks to retirees could cease in a few years unless something is done to address the pension liabilities.

What makes tax reform such a “heavy lift,” says Loftus, is that many constituents will oppose any actions that result in them paying higher taxes. For example, he says some loopholes may be unpopular with voters, but if eliminating that exemption increases your personal taxes, then you will hold your representative or senator accountable for cutting it. Although there are no elections this year, all state House members are up for re-election in 2018.

Senate Health Care Plan Stalls
U.S. Senate Majority Leader Mitch McConnell of Kentucky didn’t get the health care vote he hoped to have before the Independence Day break. Lawrence Smith of WDRB-TV in Louisville says McConnell has to “thread a needle” with the legislation to repeal and replace the Affordable Care Act: McConnell has to please conservative Republicans like Sen. Rand Paul, who don’t think the Senate plan goes far enough in repealing aspects of the ACA, and more moderate Republicans who think the legislation goes too far in cutting health care spending.

For the Senate’s repeal-and-replace bill to pass, McConnell can only afford to lose two GOP votes, so he must find a way to get more senators on board with the legislation, says Smith.

Bill Estep of the Lexington Herald-Leader says a study of the bill shows it would cause the rate of uninsured people in Kentucky to increase from 6.3 percent to 21 percent. Many of those people losing coverage would be Medicaid recipients, he says.

If the Senate doesn’t approve the legislation now, President Donald Trump wants Congress to pass a simple repeal of the ACA and then create a replacement for it at a later date. Smith says Sen. Paul has also proposed that option.

In a related story, Estep says health insurance premiums in Kentucky could increase anywhere from 6.5 to 47 percent next year under rate requests filed by insurance carriers.

Overdose Numbers and Drug Maker Lawsuit
Deaths due to drug overdoses rose again last year to 1,404 Kentuckians, says Cheves. That’s an increase of 156 more people over 2015 numbers. Van Ingram of the state’s drug policy office says wider availability of naloxone, an overdose reversal drug, is helping to keep the death toll from being even higher, according to Cheves.

Officials attribute the increased deaths to the abuse of heroin and synthetic opioids like fentanyl. In comparison to overdose deaths, Cheves says car wrecks killed about 800 people in the commonwealth in 2016.

Attorney General Andy Beshear wants to pursue legal action against drug companies, distributors, and pharmacies that have contributed to the opioid crisis. Meanwhile state Senate President Robert Stivers is questioning a settlement the state made with one drug maker in late 2015.

Former Attorney General Greg Stumbo sued Purdue Pharma in 2007, alleging the company misled the public about the addictive nature of its drug OxyContin. Estep says Stumbo believed the case could be worth $1 billion based on the extensive damage it had done to the lives of many Kentuckians. But when Attorney General Jack Conway settled the case just before he left office in 2015, Purdue Pharma agreed to pay $24 million in damages.

Loftus says Stivers, a Republican, wants to know why Conway, a Democrat, rushed to make that last-minute settlement agreement and why the amount was so low. Stivers contends Conway wanted to protect incoming Attorney General Beshear, also a Democrat and the son of former Gov. Steve Beshear, from an embarrassing conflict of interest because he worked for the law firm that represented Purdue Pharma.

Loftus says both Beshear and Conway deny those allegations. He reports that Conway contends the case was more complicated than expected and the settlement price was fair. Beshear says he had nothing to do with the timing of the settlement and didn’t make any money from the case while working at Louisville’s Stites & Harbison.

Loftus says Grimes argues that Trump has never offered proof of his allegations that millions of votes were illegally cast in the 2016 presidential election. Grimes says she’s concerned about how the information might be used. She’s also uncertain whether the commission has the authority to compel compliance with its request, says Estep.

• Kentucky taxpayers now own at least a 20 percent stake in a company that’s slated to build an aluminum mill in Greenup County. Smith says the state used a $15 million incentive approved by the General Assembly to buy stock in Braidy Industries. He says that makes the state the first or second largest investor in the company. Gov. Bevin contends the investment is worth it since Braidy pledges to create 550 new, good-paying jobs.

Lawmakers approved the incentive on the last day of the 2017 legislative session without being told what company would receive it. Smith says there are now questions about who else invested in the company.

• And the state of California is holding fast to its travel ban against Kentucky. Smith says California law prohibits that state from doing business with states that discriminate against LGBTQ individuals. Officials there contend a religious freedom bill passed by the Kentucky General Assembly this year opens the door to discrimination against LGBTQ students in schools.

Smith reports that civic leaders in Louisville and Lexington asked for their cities to be exempted from the ban, but California Attorney General Xavier Becerra says the law applies to entire states, so a carve out for individual communities is not possible.

Mayor Greg Fischer says two conventions scheduled for Louisville have been cancelled because of the ban, resulting in a loss of $2 million in revenues, according to Smith. 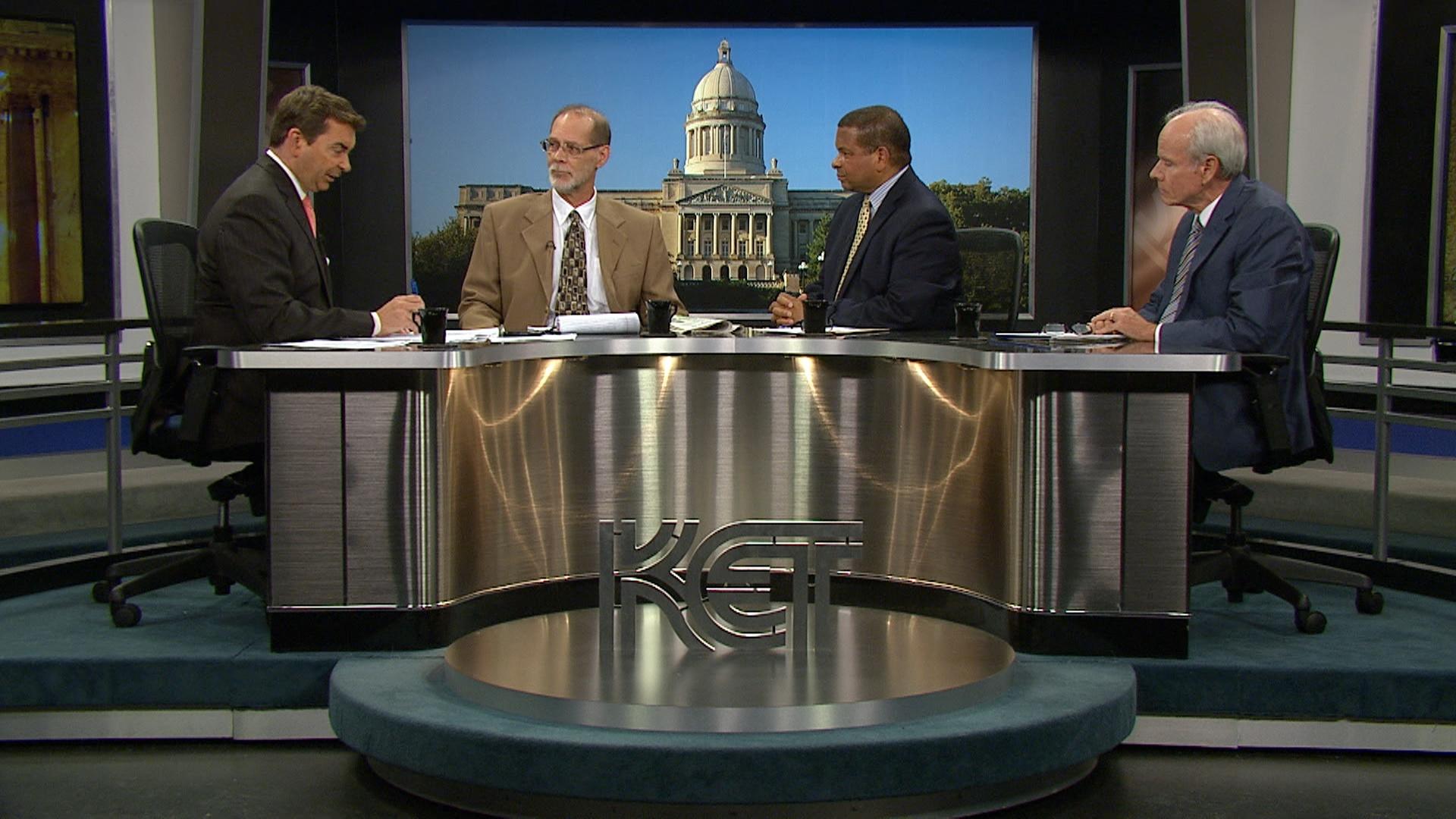