Bill Bryant and a panel of journalists discuss the week's news from the commonwealth, including legislation in the General Assembly and debate among Kentucky Republicans in Washington over proposed federal health care reform. Guests: Deborah Yetter of the Louisville Courier-Journal; Kevin Wheatley of Spectrum News; and Adam Beam of the Associated Press.
S43 E16 Length 26:34 Premiere: 3.10.17

Vice President Mike Pence visited Louisville this weekend to promote a bill to replace the Affordable Care Act. But even members of his own party are divided on the legislation designed to make health care cheaper and more accessible.

The journalists on KET’s Comment on Kentucky discussed local reaction to the GOP proposal, and reviewed the fates of a number of bills before the state legislature.

Mixed Reviews for Health Care Alternative
The vice president spoke to a meeting of local business leaders on Saturday about the American Health Care Act, the ACA-replacement plan released last week by House GOP leaders. But several prominent Kentucky Republicans are critical of the proposal. Adam Beam of the Associated Press says Gov. Matt Bevin, who appeared in Louisville with Pence, said he has problems with the legislation.

U.S. Sen. Rand Paul believes the bill will fail in the Senate and says it doesn’t go far enough in repealing Obamacare, according to Beam. Paul has proposed his own replacement plan that eliminates the individual mandate, provides a $5,000 tax credit for health savings accounts, and enables groups of individuals or small businesses to form associations to negotiate for health insurance.

Beam says President Donald Trump, who once tweeted that Paul was a “spoiled brat,” took to Twitter last week to say he’s confident Kentucky’s junior senator “will come along” with the House plan. Trump even called Paul “my friend” in the tweet. Meanwhile, Senate Majority Leader Mitch McConnell has embraced the bill because he says it is legislation he believes the president will sign into law.

Deborah Yetter of The Courier-Journal says analysis of the plan indicate that fewer people will be covered and insurance could cost more. She says provisions to turn Medicaid into a block-grant program could result in Kentucky and other states getting less money to provide care for the poor and disabled. She says a number of national organizations including AARP and the American Medical Association oppose the legislation. Yetter also says hospital groups fear it would lead to a return of massive bills for uncompensated care.

Former Gov. Steve Beshear held a press conference on Saturday to counter Pence’s visit. Beam says Beshear’s efforts to implement the health reforms in Kentucky and to expand Medicaid coverage are key parts of Beshear’s legacy. He says the former governor, a Democrat, is fighting hard to protect what he sees as progress.

General Assembly Updates
Public schools have an incentive to start later in the year under a legislation awaiting Gov. Bevin’s signature. Kevin Wheatley of Spectrum News says Senate Bill 50 grants schools that begin classes no earlier than the Monday closest to Aug. 26 greater flexibility in how they meet the required annual instructional time. Districts that start later would not have to go the minimum 170 instructional days as long as they fulfill the required 1,062 instructional hours per year. Supporters of the legislation contend it will lengthen summer vacations for families, boost tourism revenues, and improve Kentucky State Fair attendance, according to Wheatley.

Under the legislation districts are required to form special committees to explore later start dates and publicly report their recommendations. Beam says that could create public pressure for districts to push back their school calendars.

State Attorney General Andy Beshear criticized a committee substitute attached to a bill that would limit the power of his office. House Bill 281 originally set a cap on contingency fees paid to outside legal counsel hired by the attorney general’s office. The substitute released early last Wednesday shifts the authority to determine what lawsuits the state could file from the attorney general to the governor. Yetter says Beshear called the move a “power grab” by Gov. Bevin.

The measure takes away the attorney general’s ability to represent the state in civil lawsuits except for Medicaid fraud, consumer protection, and Public Service Commission rate cases, says Beam. The governor would determine all other suits.

Beshear and Bevin have been at odds since they took office. Beam says the attorney general sued the governor three times last year. He also notes that Bevin and other Republicans have criticized Beshear and his predecessor Jack Conway, both Democrats, for not defending Kentucky on issues like same sex marriage, abortion, and transgender bathrooms. Beam says Bevin wants the ability to decide whether the state should file lawsuits like those.

The Senate Judiciary Committee did not vote on the measure last week but Beam says the panel could return to the issue this week. He reports that committee chairman Whitney Westerfield (R-Hopkinsville) says Republicans could regret passing such legislation if party control of the offices of governor and attorney general flip in the future. Beshear defeated Westerfield in the 2015 race for attorney general.

A measure to help those with mental illness get treatment is awaiting final passage by the House. Yetter says Senate Bill 91, also known as Tim’s Law, would enable judges to order out-patient treatment for those with a mental illness. She says current law allows a judge to involuntarily commit someone to a hospital for only a few days. Once stabilized, the individual is released. Yetter says Tim’s Law is named for a Lexington man who cycled in and out of psychiatric treatment dozens of times before he eventually died.

The Senate gave final passage to the so-called Blue Lives Matter bill. The legislation would make targeting police officers or other first responders a hate crime. Yetter says Sen. Reggie Thomas (D-Lexington) and Sen. Gerald Neal (D-Louisville), both African Americans, spoke passionately against the House Bill 14 during the floor debate. She says the men fear the legislation is meant to dampen the Black Lives Matter movement.

House Bill 315 would make recruiting children into gang activity a felony. It passed the House in late February and awaits action in the Senate. Beam says racial profiling concerns came up during debate over the measure.

The House passed a measure to bring Real IDs to Kentucky. After an outcry by personal privacy advocates, Gov. Bevin vetoed a similar bill last year that would bring the state into compliance with new federal rules regarding personal identification. Wheatley says this year’s measure makes obtaining the new ID optional. Kentuckians who decline Real ID would have to show a passport to take domestic airline flights.

Time Could Be Running Out for Other Bills
With only four days left in the session, the fates of several high-profile bills remain uncertain. Charter school legislation has cleared the House but has hit a snag in the Senate. Wheatley says there’s debate over who can authorize the creation of charter schools and how they will be funded.

Yetter says a bill to allow students to attend the school closest to their homes is also foundering in the upper chamber. She says some lawmakers are concerned that the measure, meant largely for students attending Jefferson County Public Schools, would take control away from local officials. And Beam says a bill to ban use of tobacco products and e-cigarettes on school property and at school-related events appears to be dead for this session.

The journalist says measures regarding felon reentry and performance-based funding for state universities also remain up in the air. 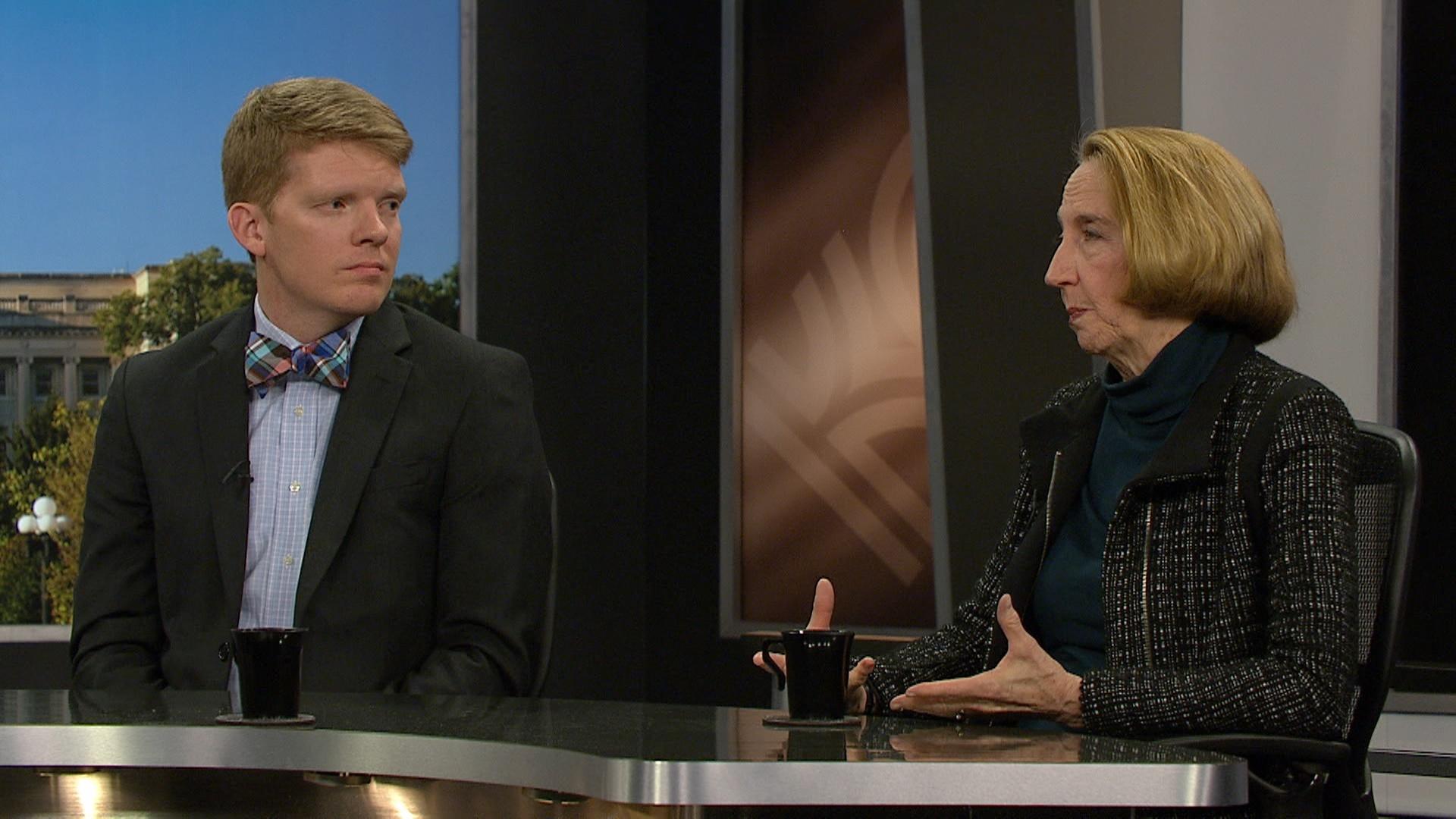