State House Democrats have feared that defectors would leave their ranks after Republicans dominated the elections three weeks ago. But when the first legislator announced his switch to the GOP, it still took Democratic leaders by surprise.

The journalists on Comment on Kentucky discussed the move and how both parties are juggling for control of the lower chamber of the General Assembly.

Inter-Party Squabble Leads to Switch
The switch by Rep. Denver Butler of Louisville from Democrat to Republican was a shock on several levels, according to Lawrence Smith of WDRB-TV in Louisville. He says Butler comes from a strongly Democratic family (his late father was a state representative and his sister is a current Louisville Metro Council member), and his southwestern Jefferson County district is traditionally Democratic. Smith says he expected rural Democrats to be more likely to change party affiliations, not an urban Democrat like Butler.

Smith adds that he’s not sure how Butler’s constituents, who include many blue-collar union workers, will respond to the switch, especially when it comes time for Butler to vote on right-to-work legislation that Republicans are expected to push in the upcoming General Assembly .

Ronnie Ellis of CNHI News Service says Butler’s decision may have more to do with personal agendas than political ideology. He says Butler, who is a retired police detective, was frustrated that fellow Democrats didn’t embrace his call for an audit of a training fund for first responders. Ellis says Butler was also upset with how Rep. Larry Clark, another Louisville Democrat, announced his retirement from the House seat that Butler’s brother plans to seek.

Both Sides Fight for Control
Democrats have controlled the state House since 1921, and Butler’s defection leaves the party with a slim 53-to-47 seat majority in the chamber.

Jack Brammer of the Lexington Herald-Leader says Democrats are regrouping as quickly as possible to oppose Butler in next year’s elections, and to win two special elections to fill the House seats being vacated by Rep. Mike Harmon (R-Danville), who was elected state auditor, and Rep. Ryan Quarles (R-Georgetown), who won the agriculture commissioner’s race.

Other party switches could still happen before the legislature convenes on Jan. 5. Brammer says House Speaker Greg Stumbo has threatened Democrats who are considering a switch with stiff competition in the 2016 elections. But Democrats will face two additional challenges: Brammer says the party is in a “shambles” and uncertain who its next leader will be. And without a Democrat in the governor’s mansion, Ronnie Ellis says fundraising for party candidates will be that much harder.

Republicans, on the other hand, can lure Democrats to their side with the promise of plum committee assignments or even chairmanships, says Ellis. He says the GOP wants to challenge every House Democrat next year, and they’re working to ensure that they field quality candidates for those races.

Building the Bevin Administration
Gov.-elect Matt Bevin drew praise for the third major appointment to his administration. Louisville attorney and former state legislator Scott Brinkman will be secretary of Bevin’s executive cabinet. Ronnie Ellis says Brinkman, who served 10 years in the House, is respected on both sides of the aisle and by the Frankfort press corps. He says the strength of Bevin’s first appointments is making other prominent Republicans feel more comfortable with the idea of joining the self-proclaimed political outsider’s administration.

But Ellis says Bevin runs a risk of alienating his Tea Party base if he doesn’t include representatives of that wing of the GOP in his administration. Ellis says Tea Partiers get frustrated when a candidate they’ve supported doesn’t do more to reform government and the Republican Party.

Also last week, Bevin criticized the Lexington Herald-Leader for publishing an editorial cartoon that referenced his children. In the wake of the Paris terrorist attacks, Bevin joined a number of Republican governors in opposing the resettlement of Syrian refugees to American states on security reasons.  The cartoon by the Herald-Leader’s Joel Pett depicts an aide arranging pictures of Bevin’s children, four of whom he adopted from Ethiopia, on the governor-elect’s desk, while Bevin cowers underneath it. The caption reads, “Sir, they’re not terrorists, they’re your own adopted kids.”

Bevin said the cartoon was “deplorable” and an “overtly racist attack” on his children.

Beshear Touts Accomplishments
As he prepares to leave office, Gov. Steve Beshear met with reporters to discuss his tenure in Frankfort. Jack Brammer says Beshear touted his work to expand Medicaid coverage and launch the state health exchange Kynect. Beshear also noted the construction of the new Ohio River bridges at Louisville, and how he guided the state through the recession years.

Beshear said his biggest disappointments in his eight years as governor were failing to pass tax reform or expanded gaming.

Another regret may be the funding crises in the state pension systems. The Herald-Leader reported last week that the Kentucky Employees Retirement System is now only 19 percent funded. Gov.-elect Bevin says he wants to move all new state hires into a 401(k)-type plan, but Ronnie Ellis says Bevin may encounter some resistance to that idea from Senate Republicans who pushed legislation to reform KERS in 2013. 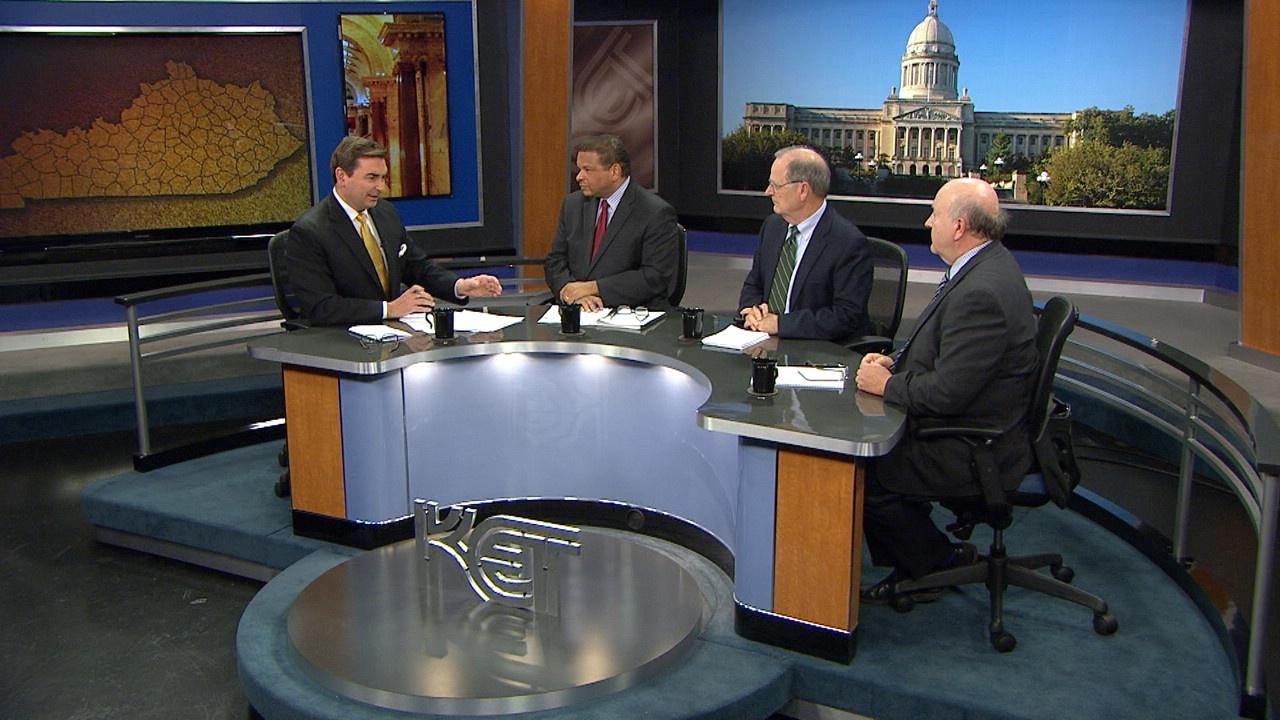