Journalists from around the state discuss news of the week with host Bill Bryant, including the latest political fallout from proposed legislation to restructure Kentucky's public pensions. Guests: Jack Brammer of the Lexington Herald-Leader; Wes Swietek of the Bowling Green Daily News; and Deborah Yetter of the Louisville Courier-Journal.
S44 E1 Length 26:34 Premiere: 11.4.17

The march towards pension reform took an unexpected detour with the sudden resignation on Sunday of state House Speaker Jeff Hoover (R-Jamestown).

The journalists on KET’s Comment on Kentucky discussed the events that prompted Hoover stepping down from his leadership post and how that could impact a special legislative session to address the public pension crisis. They also reviewed the results of a new Big Red Poll and other news from around the commonwealth.

Events that Prompted Hoover’s Resignation
Wednesday evening Deborah Yetter of The Courier Journal broke the story that Speaker Hoover had reached a confidential settlement over sexual harassment claims brought by a woman who works in his office. She says the news rocked Frankfort at a time when Hoover was expected to help unite his GOP caucus to pass pension reform.

House Republicans were previously scheduled to meet in a closed-door session on Friday to review the recently released pension legislation. Yetter says the caucus also discussed the harassment allegations against Hoover. The speaker was not available to talk with reporters after that meeting, but Yetter says House Majority Floor Leader Jonathan Shell (R-Lancaster) said the caucus gave Hoover their “full support.”

But within a few hours, Rep. Wesley Morgan (R-Richmond) broke ranks. Jack Brammer of the Lexington Herald-Leader reports that Morgan said that if Hoover did not step down, the House might have to consider impeaching him. Morgan also disinvited the speaker from attending a campaign event with him.

Hoover maintained his public schedule but would not comment on the allegations other than to say he would “absolutely” not resign, according to Brammer. On Saturday, Gov. Matt Bevin called on every lawmaker involved in the matter to step down. Hoover later issued a statement reiterating his intention not to resign, but in a Sunday afternoon press conference, he did just that. Hoover said he does intend to keep his seat representing the 83rd House district in south-central Kentucky.

Several state legislators have faced allegations of sexual impropriety in recent years. Former state Rep. John Arnold (D-Sturgis) resigned in 2013 amid allegations he harassed three female employees at the capitol. Earlier this year, Senate Democrats stripped Sen. Julian Carroll (D-Frankfort) of his leadership post as minority whip after allegations surfaced that he had solicited and groped a younger man in 2005. Following the news of the complaint against Hoover, Yetter says Sen. Morgan McGarvey (D-Louisville) called for an outside investigation of working conditions for Legislative Research Commission staff and whether their concerns are being handled appropriately.

Questions remain about the settlement agreement Hoover reached in the matter. Yetter says the woman who claimed the harassment did not file a formal complaint or lawsuit, and the terms of their agreement have not yet emerged. Brammer says a key concern is who, if anyone, helped Hoover pay the settlement award.

Pension Reform Plan Faces Opposition
Speaker Hoover’s resignation comes as some Republicans including Hoover had expressed reservations about the pension reform bill. Yetter says reporters asked Rep. Shell on Friday if the allegations against Hoover would hurt the prospects for the legislation. She says Shell responded that the bill was in trouble even before the Hoover matter became public.

Gov. Bevin told the Lexington Chamber of Commerce that critics of the reform package didn’t have the sophistication to understand the ramifications of not passing the legislation. Brammer says the governor later walked back that comment, saying the opponents didn’t have the financial expertise to understand the bill or what’s at stake if it fails.

Pension advocates from around the state rallied in Frankfort on Wednesday to voice their displeasure with the legislation. Active and retired teachers are among the most vocal opponents of the reform plan. Wes Swietek of the Bowling Green Daily News says the governor irritated educators with comments he’s made in recent weeks about their opposition to the reforms. Swietck says superintendents from several southern Kentucky school districts recently gathered in Bowling Green to publicly denounce the legislation.

Brammer says the pension bill is a work in progress as the governor and Republican lawmakers continue to tweak the legislation. No date has been set yet for a special session to consider the reforms, and Brammer says some are questioning the wisdom of spending $65,000 a day to hold a special session when the 2018 regular legislative session is set to convene on Jan. 2.

Politicians Draw Low Reviews from Voters
A new Big Red Poll from Western Kentucky University’s Social Science Research Center shows Kentuckians are dissatisfied with several of their elected officials. Swietek says President Donald Trump fared the best in the survey with a 50 percent favorability rating and 50 percent of respondents approving of his job performance. But 68 percent of those polled believe the country remains on the wrong track.

In Frankfort, Gov. Bevin has 43 percent favorable and 42 percent unfavorable marks. The poll was conducted in late October before some details of the pension reform plan became clear, and Swietek says Bevin’s numbers could be even lower today.

Finally respondents gave state Attorney General Andy Beshear a 32 percent favorability rating, but his unfavorable number was 35 percent and a third of those polled said they didn’t have enough information to form an opinion of the Democrat. Swietek says that’s not good news for Beshear as he considers a potential run for governor or other higher office.

Other State News
Franklin Circuit Judge Philip Shepherd has struck down the state’s new medical review panel law. Yetter says the judge ruled the law is unconstitutional because it makes it too hard for medical malpractice claims that have merit to get to court.

The law that passed earlier this year requires a panel of doctors to review medical malpractice claims before they go to trial. Yetter says state Republicans as well as doctors, hospitals, and other health care providers pushed for review panels for years, while trial lawyers and patient advocacy groups oppose the measure. The Bevin Administration plans to appeal the judge’s decision.

An independent accrediting agency has reaccredited the Kentucky Cabinet for Health and Family Services. Yetter says the agency reviews factors like staffing ratios, caseloads, and home visits. But a few days after the CHFS accreditation, Yetter says the Kentucky Legislative Research Commission released a report that shows the cabinet failing in nearly every performance metric.

Business leaders in Bowling Green and Warren County hope to revive talks to merge the city and county governments. Swietek says a previous merger vote in the early 1990s failed.

The Bowling Green region is one of the fastest growing regions in the commonwealth, according to Swietek. He says the city’s proximity to Interstate 65, the presence of Western Kentucky University, strong town-gown relations, and bipartisan cooperation among local leaders have fueled the region’s success.

Earlier this year officials broke ground for a new regional medical school in Bowling Green. Swietek says the facility is a partnership among WKU, the University of Kentucky, and Med Center Health in Bowling Green. 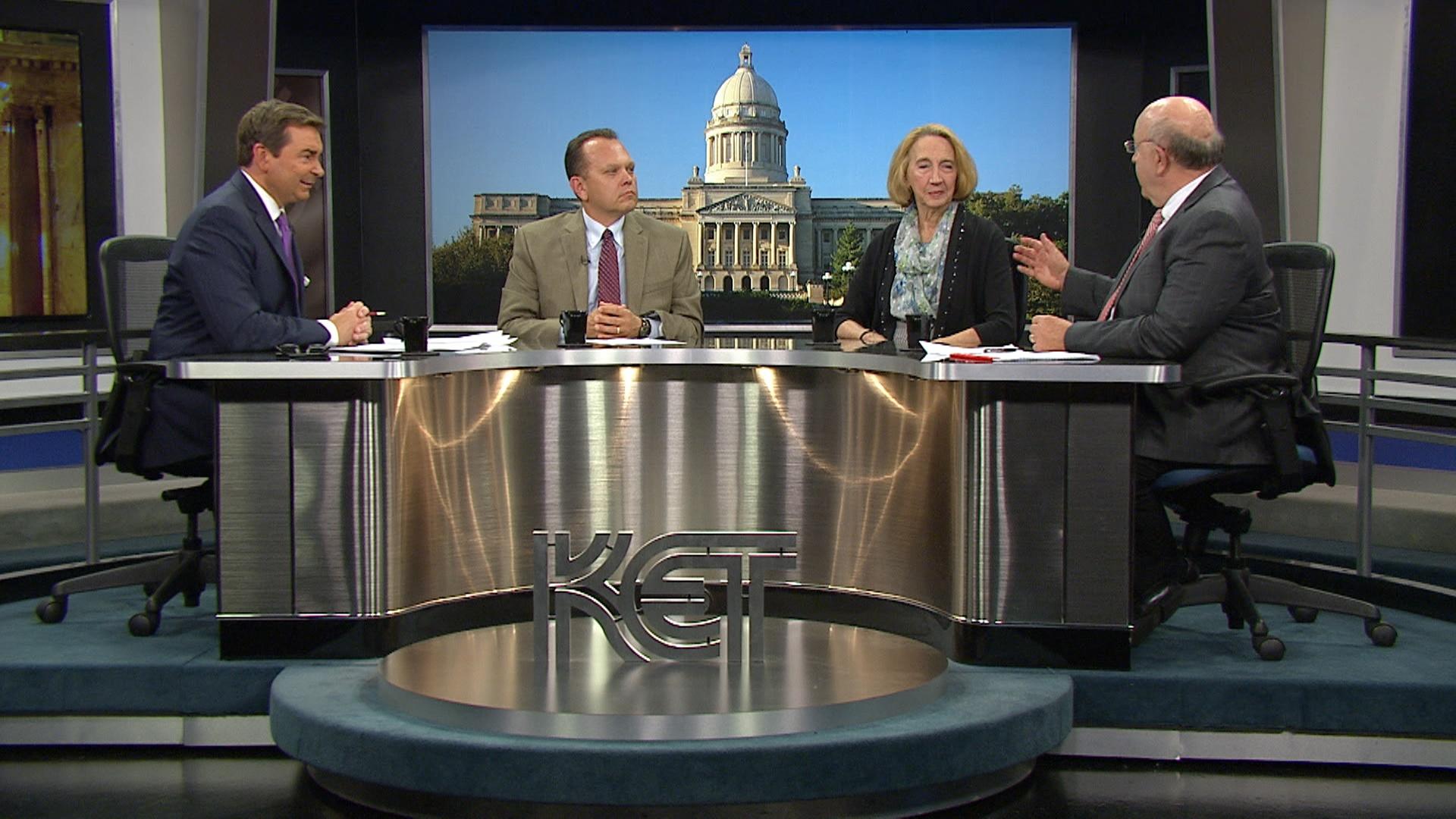