With two weeks until Election Day, the campaigns for governor and the other statewide constitutional offices are preparing for the final debates, rallies, and advertising buys.

The journalists on Comment on Kentucky reviewed the latest on each of the races, and discussed how health care could take center stage in the gubernatorial contest.

Health Co-op Closure
Ronnie Ellis of CNHI News Service says health care will be a key issue in the remaining days of the governor’s race, especially with the recent news that Kentucky Health Cooperative will no longer offer coverage after this year. The co-op is the largest private health insurer in the Kynect system, but it developed financial difficulties when it had higher than expected enrollments of individuals with serious health problems. Ellis says eight state health cooperatives have closed or plan to close due to similar problems.

Republicans ranging from Sen. Mitch McConnell to gubernatorial candidate Matt Bevin to state lawmakers pointed to the collapse of the cooperative as another failure of Obamacare. Ellis says the issue could benefit Bevin, but he also says the Louisville businessman has made inconsistent statements about how he would handle the some 500,000 Kentuckians who have received health insurance coverage through Kynect and the state’s Medicaid expansion.

On the flipside, Ellis says Democrat Jack Conway will have a difficult time explaining the reasons behind the closure of the co-op. He says such nuanced explanations are difficult to make on the stump or in a 30-second campaign ad

Since Gov. Steve Beshear launched Kynect and the Medicaid expansion by executive order, the next governor could repeal them with a new order. Ellis says Conway supports the programs but wants to closely monitor their costs and performance, whereas Bevin has pledged to either end them immediately upon taking office or within the first year of his administration.

Last week Bevin challenged Conway to special debate on health care, but the Democrat declined, saying they could discuss the issue in the two remaining televised forums on Oct. 25 at Eastern Kentucky University and on Oct. 26 on KET’s Kentucky Tonight.

Other Gubernatorial Updates
Jack Brammer of the Lexington Herald-Leader says the Washington D.C. newspaper and website Roll Call has moved Kentucky’s race for governor from “toss up” to “toss up, tilts Democrat.” He also reports that the Cincinnati Enquirer endorsed Conway in the race. That comes as the Secretary of State’s office released figures that show the 4th Congressional district in northern Kentucky now has slightly more Republicans registered to vote than Democrats.

Kevin Wheatley of cn|2 says recent Enquirer coverage has fueled speculation that some prominent establishment Republicans in the district may favor Conway over Bevin. He says the Democrat visited his field office in northern Kentucky to boost support for his campaign in the region.

The Bevin camp released internal polling that confirms Conway has a slight edge in the race, holding a lead of 44 to 41 percent. Brammer says Republicans are happy with the tight race given the millions of dollars Conway and his supporters have spent on attack ads.

Ronnie Ellis speculates that Bevin released the poll numbers as a way to convince the Republican Governors Association (RGA) to reenter the race. The RGA has spent some $3 million for ads on Bevin’s behalf, but recently suspended their purchases in the state.

Down-Ballot Races
The race for attorney general is tied at 38 percent despite a significant fundraising advantage for Andy Beshear. The Democrat has raised $2.7 million compared to $141,000 by the GOP candidate, state Sen. Whitney Westerfield. But the Republican Attorneys General Association (RAGA) has spent more than $2 million on the race, helping to bring Westerfield even in the polls. Ellis says that the RAGA has recently pulled back on ad spending, but he expects them to return before Election Day. He also says Beshear, who is the son of Gov. Steve Beshear, may have overestimated the popularity of the family name among voters.

The Democrat in the state auditor’s race also holds a significant financial edge. Jack Brammer says incumbent Adam Edelent has raised nearly $1 million for his campaign, while Republican state Rep. Mike Harmon only has about $26,000. Brammer says Harmon also suffered from losing his campaign consultant, Jesse Benton, a prominent Republican operative, to allegations of impropriety on a previous political campaign. The latest Bluegrass Poll shows Edelen with a two-point lead in that race.

In the race for Commissioner of Agriculture, Republican state Rep. Ryan Quarles has a slight lead over Democrat Jean-Marie Lawson Spann. Brammer says that Spann recently endorsed the use of medical marijuana under strict supervision of a doctor. Ronnie Ellis adds that the Republican Party of Kentucky has filed an official complaint against Spann. They allege that the use of her weekly farm radio show, which is sponsored by her father’s agricultural marketing company, constitutes an illegal corporate contribution to Spann’s campaign.

And in the state Treasurer’s contest, Republican attorney Allison Ball leads Democratic state Rep. Rick Nelson by two points. While the post is largely ceremonial, Brammer says the treasurer does sit on the boards of the Kentucky Lottery and the teacher pension system. He says both candidates want to expand the scope of the office: Ball wants to create a website that details state spending, and Nelson wants to teach financial literacy in pubic schools. 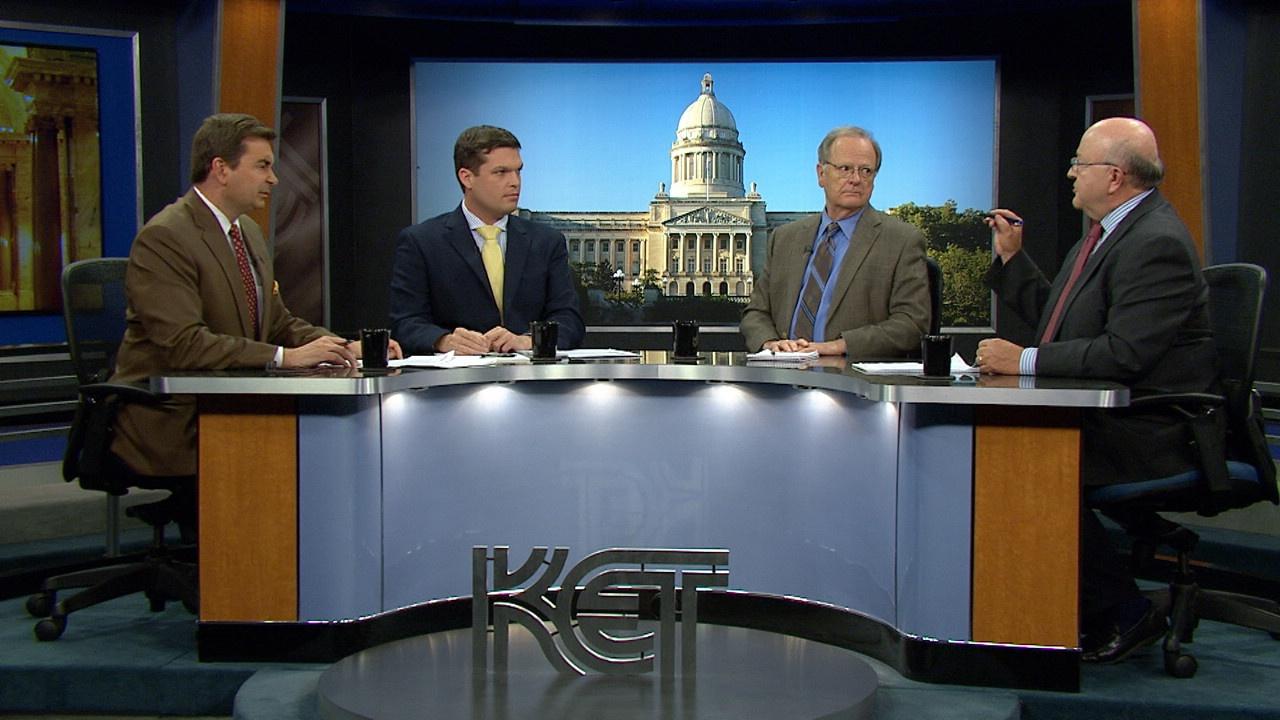