We figured the plan to overhaul the state’s retirement systems and address the more than $35 billion in unfunded pension liabilities would be complex. Now we know just how complex.

The full bill arrived this weekend – all 505 pages of it.

The journalists on KET’s Comment on Kentucky explored the reaction to the pension reform plan and what may happen in the weeks leading up to the special legislation session to consider the bill. They also discussed the latest on the opioid crisis and other items in the state news.

Pension Reforms Face Opposition
With the release of the full bill, Adam Beam of the Associated Press says the real fights over the proposed pension reforms will begin. He says teachers appear to be the most organized in their opposition to the plan at this point. The executive director of the Kentucky Association of School Superintendents even suggested that local school districts close so teachers could rally against the proposal in Frankfort.

In a Facebook video, Gov. Matt Bevin harshly criticized that idea. But Ronnie Ellis of CNHI News Service says a mass protest like that would be reminiscent of a 2004 rally that teachers held at the capitol to oppose health benefit cuts proposed by then-Gov. Ernie Fletcher.

Ellis and Beam say some small-town lawmakers may face an especially difficult vote on the pension reform legislation. That’s because teachers and public employees comprise a significant proportion of the workforce in many rural districts.

Since the legislation is not a revenue measure and does not contain an emergency clause, it will require only a majority of lawmakers present to approve it, according to Ellis. So he says the bill could pass the state House of Representatives with only 41 or 42 votes. Ellis says that could happen if some legislators are absent when the vote is taken.

House Minority Floor Leader Rocky Adkins (D-Sandy Hook) is already raising the possibility that some Republican lawmakers may “take a walk” instead of voting for a bill that their party supports but that their constituents oppose. Ellis says Adkins wants to know how those lawmakers will justify getting paid to attend a special legislative session but not vote on the one bill being considered.

No date has been set yet for the session. Ellis says House Speaker Jeff Hoover (R-Jamestown) still wants his members to have 30 days to review the legislation before convening in Frankfort. That would give lawmakers time to hold public forums on the matter, like a recent gathering in Richmond hosted by Rep. Donna Mayfield (R-Winchester) and Rep. Wesley Morgan (R-Richmond). Ellis says both lawmakers told the crowd that they are not committed to voting for the bill yet. Mayfield even pledged to oppose any action that would go against the inviolable contract between public workers and their employers.

Even if the legislation does pass, Ellis says the reforms will likely be challenged in court. He says that could lead to an injunction that would halt enforcement law.

State Budget Continues to Struggle
It’s still unclear how the legislation would impact the state budget. (A fiscal note on the pension reform package is expected in the coming days.) Ryland Barton of Kentucky Public Radio says the proposal doesn’t generate much in the way of immediate savings for the state, other than a five-year freeze on cost-of-living adjustments for retired teachers and a requirement that all public employees pay 3 percent of their salaries to retiree health care coverage.

Generating more revenues to help pay down the pension liabilities also appears to be tricky since Republican lawmakers oppose raising taxes. Beam says the state looses more in tax exemptions each year than it collects in tax revenues. But he says eliminating loopholes could be seen as raising taxes.

Gov. Bevin and Senate President Robert Stivers (R-Manchester) also oppose getting new revenues from legalizing marijuana or allowing casinos. That leaves the specter of cutting more government spending. State agencies are already struggling after years of budget reductions during the recession. Beam reports that Cabinet for Health and Family Services Deputy Secretary Tim Feeley says his agency has rooted out all the waste and abuse they can and there’s nothing left to cut.

But more cuts may be coming. Barton says the Consensus Forecasting Group predicts the state will end the current fiscal year with a $155 million budget shortfall. He says Bevin is expected to issue an order for much of state government to trim enough spending to prevent that deficit.

No New Funding for the Opioid Crisis
President Donald Trump on Thursday declared the opioid crisis to be a national public health emergency. That move does not provide any additional funding but allows authorities some additional flexibility to respond to the epidemic of heroin and opioid addiction.

For example, doctors will be able to use telemedicine services to remotely treat those with a substance use disorder, according to Beam. But he says it’s unclear whether those physicians will be allowed to remotely prescribe medications used for addiction treatment.

Late last week acting U.S. Health and Human Services Secretary Eric Hargan visited a University of Kentucky Healthcare clinic that treats pregnant women and their babies that are addicted to opioids. Beam says Hargan toured the facility and met privately with doctors and patients as well as those advocating for increased funding for treatment services.

Other Frankfort News
Questions surround the firing last week of the executive director and assistant director of the State Board of Elections. Barton says the assistant director, Matt Selph, claims he was fired for voicing concerns about the security of data in the state’s voter registration database and a company contracted to protect that information.

Grimes responded that the accusations are purely political and all contracts get final approval from the state Finance and Administration Cabinet, says Barton.

A plaque that calls Jefferson Davis a patriot, hero, and statesman will be removed from the statue of the Confederate president that sits in the Capitol Rotunda. Beam says the Kentucky Historic Properties Advisory Commission voted to remove the plaque, saying the language was “subjective.” He says the Daughters of the Confederacy plans to sue to keep the signage in place.

According to a state historian, the original plan for the Davis statue, which was erected in the 1930s, was to place it back-to-back with a statue of President Abraham Lincoln. Beam reports that Lincoln was to face north towards the Union, and Davis would face south towards the Confederacy. But engineers determined the floor of the rotunda could not support the weight of the two statues so close together. 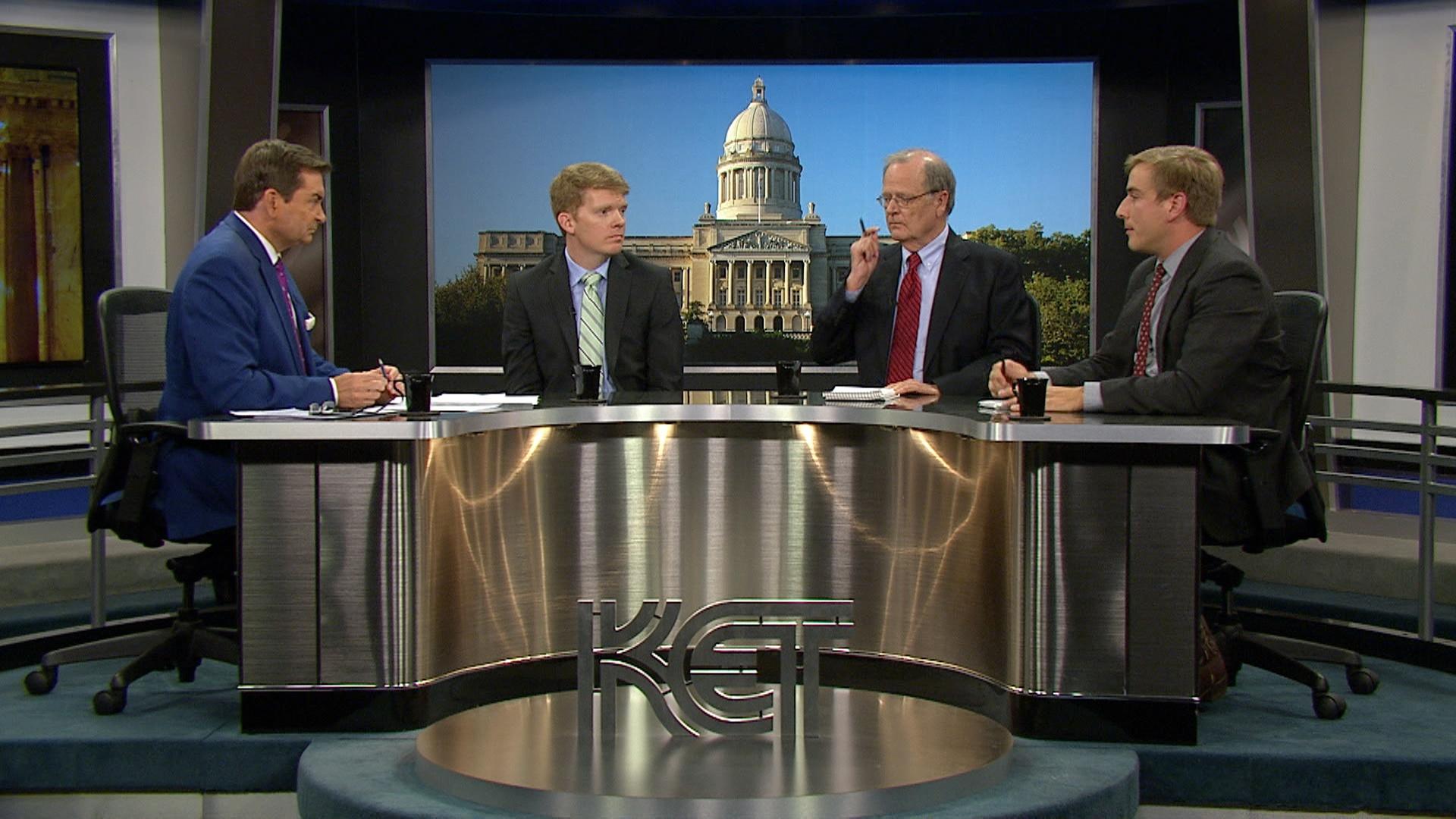