Here are key takeaways from KET’s May 22 program on the spread of coronavirus-19 disease, called COVID-19, in Kentucky. The show examined the science behind tracking cases of COVID-19 as Kentucky businesses reopen and activities resume and also looked at how social isolation has affected mental health. In addition, three Kentuckians who contracted COVID-19 and recovered share their experiences.

How Monitoring COVID-19 Cases Will Help Control the Spread

Dr. Steven Stack, MD, Kentucky’s commissioner of public health, says that the commonwealth has prevented a major outbreak of COVID-19 cases through early intervention by government officials and a shared sacrifice in which every Kentuckian has played a part.

“I think we can confidently say that we have successfully interrupted the growth phase of the epidemic curve, and we are now on the downward slope,” he says. “The challenge will be, can we maintain this?”

Dr. Stack says that keeping COVID-19 cases from spiking again will depend on how well citizens adhere to physical distancing guidelines as economic and social activity picks up. He stresses the need for people to stay at least six feet away from others, wear masks in public, and practice good hand washing and other hygiene measures at all times.

After months of low resources, Kentucky now has enough tests available to provide to the public, Dr. Stack says, which will allow for health officials to ascertain how prevalent the coronavirus is within a specific community. However, the commissioner adds that his department and local public health agencies need to do a better job distributing tests within the state’s network of hospitals, clinics, and pharmacies.

Dr. Stack says that over the next month, he and staff will work to foster public-private partnerships around the state to conduct testing, “so that every person in the state of Kentucky can have a test, either if they have symptoms or just have concerns. And then I want to ask every person to please work with us, to please partner with us to make the contact tracing a success.”

There has been resistance to contact tracing from some people due to privacy and/or personal liberty concerns, but Dr. Stack says that cooperating with the health department’s request is essential to halting the spread of the disease if a positive case is found.

“When folks choose not to participate, they may not receive the information they need to know that they’ve been exposed and may suffer a worse outcome themselves,” Dr. Stack says. “Or unknowingly, since a substantial percentage of people, maybe up to one in four, may spread this infection without even knowing it because they never developed symptoms, they may bring the infection into their own household to someone whom they love and care for dearly.”

Right now, Dr. Stack recommends that employees returning to work at offices check themselves daily for temperature and symptoms before they arrive. They should report any issues to their employer, and the employer should in turn allow them to work from home or use sick time and support their getting tested.

“As far as blanket testing, we’re not there yet,” Dr. Stack says, “We’re not doing a revolving sort of surveillance testing at places of employment. But I can’t say that there won’t be some application of that. I think that as this continues to evolve, we’re going to want to find ways that we can much more finely tailor our interventions so that we cause a lot less disruption while we still get as much of a benefit as we can for finding infection fast and preventing it from spreading.”

According to a survey from the Kaiser Family Foundation, nearly one-half of Americans say that the COVID-19 pandemic has harmed their mental health. Dr. Allen Brenzel, MD, director of the Kentucky Department of Behavioral Health and Developmental and Intellectual Disabilities, says the increased health risk and widespread economic hardship brought about by the disease has intensified mental health concerns in the commonwealth.

“I am very concerned,” Dr. Brenzel says. “We had, prior to this, seen an increase in suicide rates. We’d made progress in overdose rates, but we’re quite concerned with some early data (suggesting) overdose rates are up, and we just don’t want to lose ground.”

As COVID-19 cases began to spread through the state, Dr. Brenzel and his staff took early measures to adapt their substance use treatment protocols to an environment where physical distancing is the norm. He says doing so has ensured that persons seeking addiction services have still been able to get them via telehealth and/or distance counseling. “Honestly, it’s a very good time for folks who are actively using to seek recovery resources,” he says.

Dr. Brenzel says that shifting to a telehealth model to provide behavioral health services during the pandemic has been relatively seamless. “We’ve actually increased ‘show rates’ for appointments,” he says. “People like the fact that they don’t have to travel, they can see their provider remotely from home. It gets around transportation barriers, and some of our clinics are actually seeing more patients.”

Referral calls to the state’s child protective services division have been down during the past couple of months, Dr. Brenzel says. This is because many of those referral calls normally come from teachers, who are currently separated from their students while COVID-19 closed down schools. Dr. Brenzel says that his department continues to reach out to vulnerable children through other means during the pandemic, but also calls for communities to offer more support to at-risk families.

“We’re looking for families where there might be evidence of changes in behavior of the parents,” he says. “Loss of temper, anger, things like that would indicate that perhaps there’s a situation in the home where there may be domestic violence, and then other tell-tale signs of kids that may not be supervised properly, may not have proper nutrition, and other signs and symptoms.”

It’s normal for a person to feel heightened anxiety and stress during this time, Dr. Brenzel says. “Anxiety becomes a problem when it overwhelms a person, when they are constantly preoccupied with a threat or a fear of something happening,” he cautions. This can lead to a person developing suicidal thoughts.

“If an individual’s anxiety preoccupies them and bleeds over into other symptoms such as depression, then it’s important to reach out and find somebody to talk to,” Dr. Brenzel says. “There’s no need to suffer alone even though we’re not interacting much face to face.”

Recovering From COVID-19 Through Strength and Support

Louisville attorney Dick Clay contracted COVID-19 and spent seven days on a ventilator. Previously healthy, the 68-year-old was forced to suddenly confront his own mortality as he was admitted to the hospital and separated from his loved ones.

“I think the scariest part for me of the whole ordeal was getting out of the car, with my wife at the wheel, to go into the emergency room not knowing what was going to happen, and the finality of leaving my dear wife behind,” he says. “It hit me then – this might not have a good outcome.”

While in the intensive care unit, Clay communicated with his medical providers by writing notes. He says that the most emotionally fraught moment occurred when he wrote down a simple question for his infectious disease doctor to answer: “Will I live?”

Clay’s doctor said the chances were good that he would live. “It was only a day or two after I was out of ICU that the enormity of what I’d been through hit me,” he reflects. “And uncontrollably, waves of tears would come out, whenever I saw my doctors…. They were tears of relief and joy and profound gratitude.”

Now recovering from a harrowing experience, Clay says that the U.S. needs to treat COVID-19 “with the respect that it deserves.”

Unlike Dick Clay, 23-year-old Courtney Frazier of Breathitt County did not have severe symptoms with COVID-19. She believes she contracted the disease while on a trip to New York, and after she returned to her eastern Kentucky home, it wasn’t long before her father, Mark Hamblin, also came down with the virus.

“I started experiencing aches and pains in my legs, and I thought I was running a little low-grade fever,” says Hamblin, 49. “My chest was sore, and I had shortness of breath.”

Father and daughter were quarantined together, and spent the time playing cards and watching movies. “It wasn’t even necessarily the sickness that was hardest for me, more than anything I think it was the backlash,” Frazier says. “When we decided to tell people that I was positive, it was almost if people blamed me for bringing (COVID-19) to the area.”

“I worried over her, because I didn’t know what this was going to do, didn’t really know what it was,” Hamblin says. “From what you hear on the news, some people die from it on a ventilator – and when you get the news that one of your kids has tested positive, that was the worst experience I had.”

Thankfully, both Frazier and her father did not have to be hospitalized and are now recovered. “I think the big thing (with COVID-19) is to be prepared, but not afraid,” she advises. 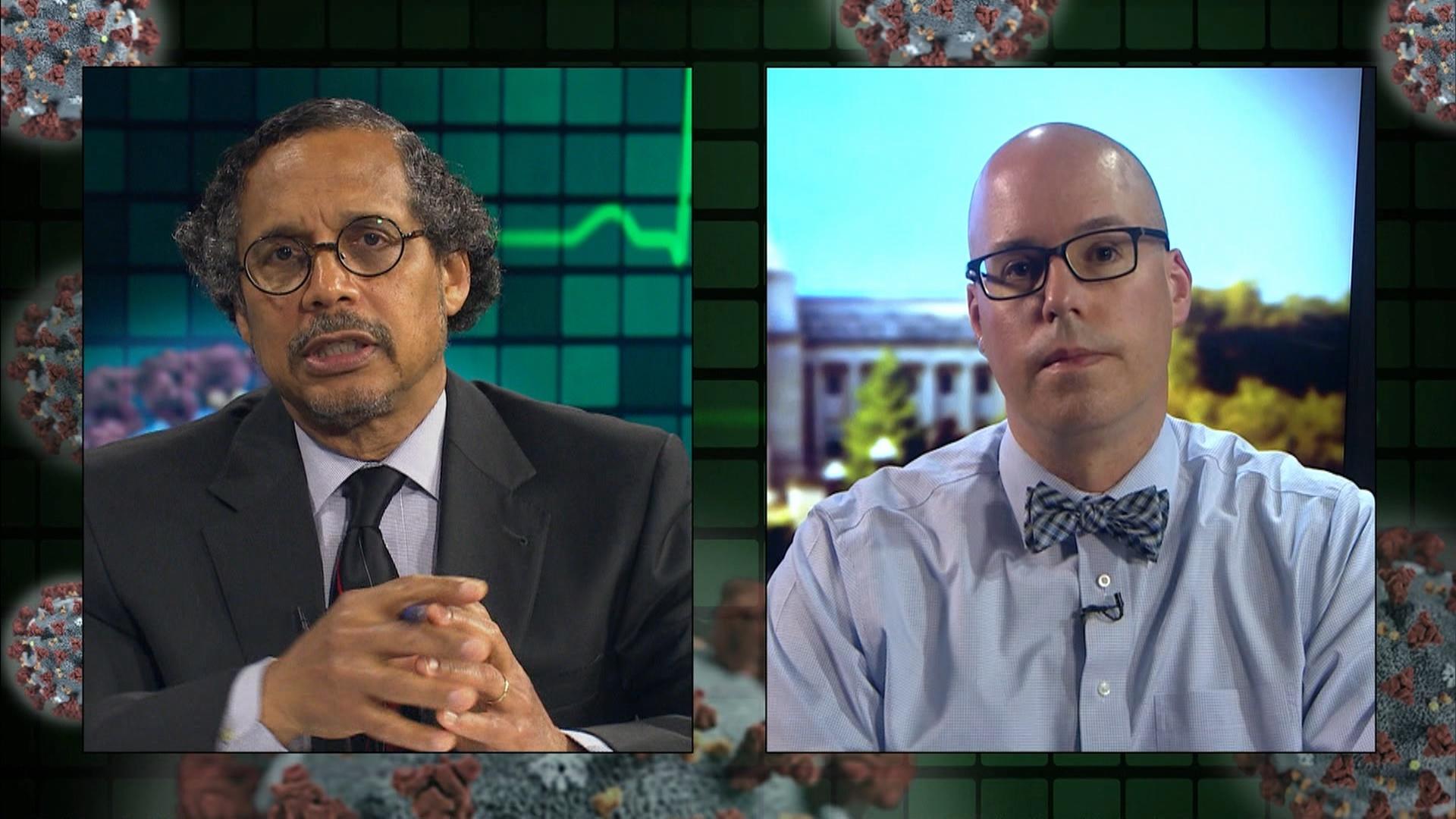