Key Takeaways: The Need for Testing and Helping Food Banks

Here are key takeaways from KET’s April 17 program on the spread of coronavirus-19 disease, called COVID-19, in Kentucky. The show examined reasons behind a shortage of effective COVID-19 tests in the state and also how food banks in Kentucky are responding to the crisis.

Implementing Effective Testing and Working Toward a Vaccine

“I think it’s really encouraging to see that Kentucky has laid out a very logical and phased plan for returning to normal,” says Julie Fischer, Ph.D., a native of Somerset and an associate research professor of microbiology and immunology at Georgetown University’s Center for Global Health Science and Security.

But Fischer cautions that widespread COVID-19 testing must be provided in Kentucky before public health officials can be confident about assessing the level of infection in communities. “We need to be able to identify people who are infected so they can be isolated and their contacts can be monitored to look for any new cases and detect them quickly,” Fischer says.

Nationwide, diagnostic testing for COVID-19 has been slow to roll out, Fischer says. Tests developed earlier this year from the Centers for Disease Control and Prevention turned out to be unreliable, she explains, and the initial federal regulatory framework was inefficient.

Now, however, Fischer says that dozens of tests have been approved under a federal emergency use authorization. “They exist, but they have to be purchased, managed, and shipped,” she explains. “We have to get them to places where we have trained personnel who can perform the tests, take the samples, get them to labs for testing, and then get the results back to public health officials for making decisions about controlling community-level activities.”

Officials estimate that a vaccine capable of inoculating the population against COVID-19 won’t be available until 2021. The delay exists because the medical community must follow an established series of clinical trials in order to determine whether a vaccine is safe and effective.

It’s a three-phase process, Fischer explains, starting with a small Phase One trial with healthy volunteers to test for safety. Then, a Phase Two trial is conducted with a larger group to see if the vaccine generates an immune response to the virus.

If the first two trials are successful, Fischer says that researchers will then move to the Phase Three trial. “That’s a clinical trial of a vaccine in a large enough group of people to be able to tell with confidence whether the vaccine is protecting against infection,” she says.

Even though researchers have worked quickly to develop vaccines for COVID-19 this spring, Fischer says that “you can’t really shorten those Phase One, Phase Two, and Phase Three clinical trials because you have to wait for the immune response… We can’t shortcut biology, and we can’t shortcut safety.”

How Food Banks Are Stepping Up for Kentuckians in Need

More than 650,000 people in Kentucky struggle with hunger, according to the national relief organization Feeding America. That measures out to one out every seven Kentuckians, and one in five children. Each year, over $300 million is required to meet the food needs of this large group – and this spring, the normal burden has increased substantially due to the economic impact of the COVID-19 pandemic.

“The impact has been unprecedented,” says Michael Halligan, CEO of God’s Pantry Food Bank in Lexington. God’s Pantry is one of seven food banks that is part of the Feeding Kentucky Association of Food Banks around the state, and it serves 50 counties in central and eastern Kentucky.

“At God’s Pantry, we’ve seen an increase of 35 percent in demand, and in some counties, we’ve seen an increase of 50 percent,” Halligan says. “We have one agency that we talked to the other day that saw three times the number of people that they normally see. Similarly across the commonwealth, all the food banks are seeing significant increases in need because of COVID-19.”

To deal with the rise in demand, God’s Pantry has boosted their purchasing to $800,000 during the last 30 days, according to Halligan. “We use that to supplement donations that we receive and the government commodities that we get,” he says.

Halligan says that each food bank in Kentucky’s network is responsible for a specific service area. The banks work with donors inside each service area to stock food supplies for citizens in need, and Kentucky’s association also gets food from the national Feeding America organization. In general, the food supply for God’s Pantry and its sister organizations is stable, Halligan says.

“Certainly because grocery stores have less stock available, we’re seeing some changes there in the short term,” Halligan adds, “but that’s because the industry is trying to replenish grocery stores. We expect that to fully come back.”

The Kentucky National Guard has also stepped up during the pandemic, Halligan says. Guardsmen and Guardswomen have assisted in processing orders and preparing shipments for God’s Pantry and other food banks, taking roles usually filled by volunteers. “The main reason that was necessary is that for many food banks, a large part of our volunteers are age 60 and above,” Halligan says. “And it’s just not a safe time for that constituency to be helping food banks.”

Persons in need should access the Feeding Kentucky website, Halligan says, and look for the Find Help section which has a map all of Kentucky’s 120 counties. “You click on the county that you live in, that will take you to the food bank that serves the county, and from there you can get all of the information that you need on how to get food assistance,” he says. 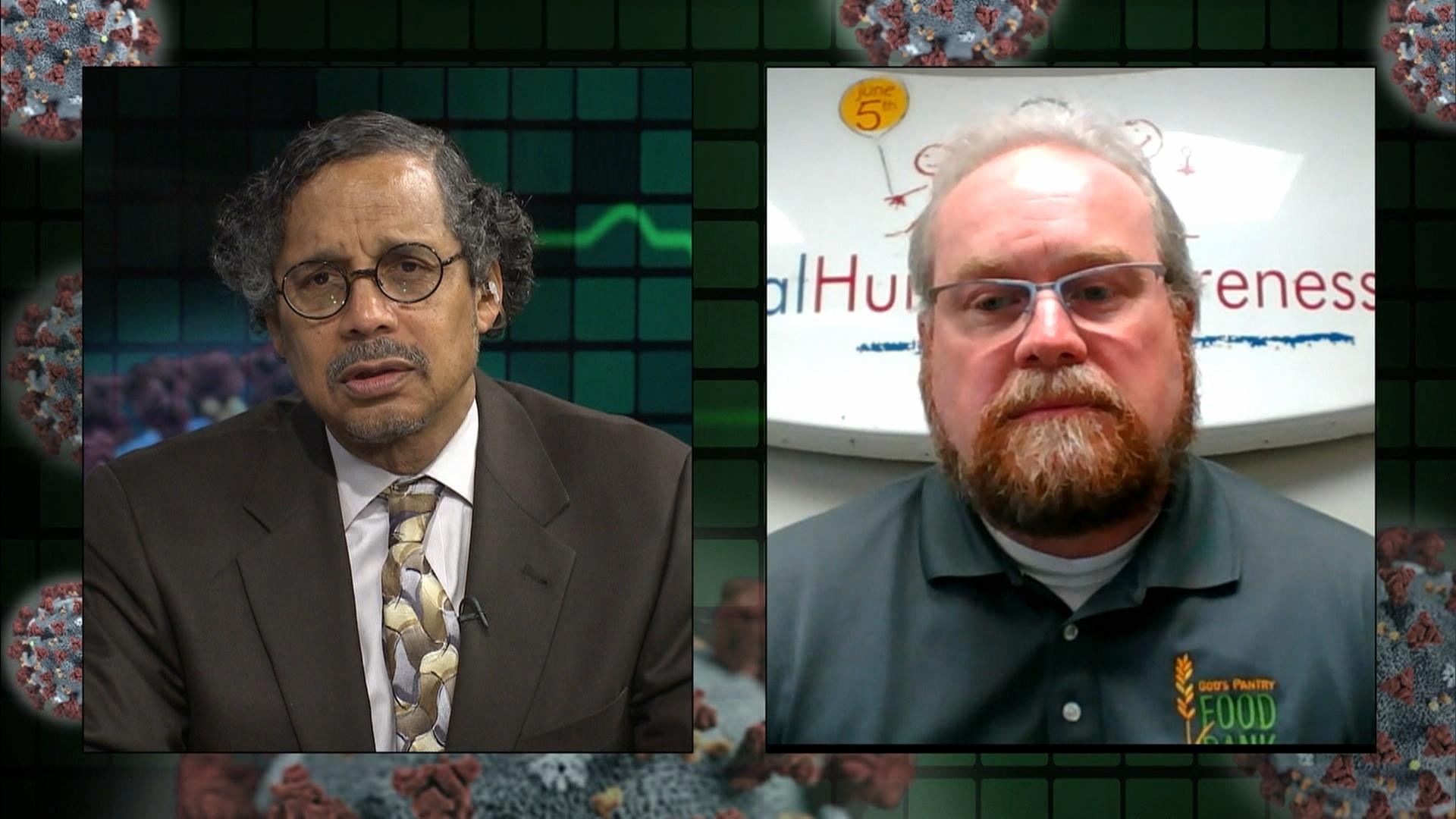