The University of Louisville’s Kentucky Author Forum welcomed David Frum to the Bomhard Theater at the Kentucky Center for the Arts on Jan. 31 to discuss his new book “Trumpocracy: The Corruption of the American Republic.” Frum was interviewed by David Jolly, who represented Florida’s 13th Congressional District from 2014 through 2017 and is an attorney and political commentator.

Frum, a native of Canada, became politically involved as a teenager and embraced conservatism during the 1980s when Republican Ronald Reagan served as U.S. president for two terms. Frum was a speechwriter and special assistant to President George W. Bush from 2001-2002 and has authored several books. Currently he is senior editor at The Atlantic.

Here are five takeaways from Frum’s discussion with Jolly:

1) “Trumpocracy’s” Call of Alarm: Frum believes that the Donald Trump presidency constitutes “the most dangerous challenge to a free government in the U.S. that any person alive has seen.” The author is careful to avoid spreading a message of impending totalitarianism, and he doesn’t feel that a historical catastrophe on the order of Hitler’s Germany or Stalin’s Soviet Union from the 20th century is in America’s future. But Frum believes that, if not checked, the Trump administration’s drive to strengthen executive power, enrich the Trump family, business, and brand, and suppress dissent will harm the country and be difficult to overcome.

“Democracy is not on or off,” Frum says. “It can deteriorate without turning into a full-blown authoritarian nightmare. The real sort of emotional project of ‘Trumpocracy’ is, I know people have a lot of fears and anxieties, and I’m trying to put some order to them, to tell you what you should be afraid of, and what not to be. Presidents do not rule by themselves, they are not dictators, and they never will be. Even if things go bad, they always work in systems, and you always have to understand the system of power.

For example, regarding Donald Trump’s frequent attacks on the media via his Twitter account, Frum believes that no journalist or any other American supporting the U.S. Constitution should worry about the government shutting down the free press; instead they should be very concerned that Trump’s language could inspire persons to make their own attacks on media institutions, which could turn violent.

2) Economic and Racial Division: Starting in the mid-2000s, shortly before the economic recession of 2007-08, Frum forecast that “something big was going to happen in American politics,” based on what he viewed as widespread economic insecurity in the U.S. and a disconnect between voters and politicians. He regards the Donald Trump presidency as the ultimate manifestation of this schism, which was also evident in the formation of the Tea Party as a reaction to Barack Obama’s presidency and policies.

“One of the things that the Republican Party really missed, was what happened in the Tea Party movement in 2009,” Frum says. His experience attending Tea Party rallies made him recognize that, at its core, the movement was made up of older white Americans who were afraid that their health care benefits under Medicare would be in jeopardy if President Obama’s Affordable Care Act were to be enacted and government expanded its health care coverage. “And they saw this president who seemed both politically and culturally alien, who had a plan to increase medical coverage to everybody else in the population, but at their expense,” Frum says.

This unease among Tea Party supporters about extending benefits to marginalized populations in the U.S. grew into a broader and more volatile sense of resentment among older white Americans in the subsequent years, Frum argues, and Donald Trump exploited those emotions to secure the Republican nomination in 2016 and then win the presidency over Hillary Clinton.

3) The Role of the Republican Party in Trump’s Rise: Frum argues that, by eventually supporting Donald Trump as their nominee, the Republican Party set aside their values of probity and responsibility in pursuit of political power – and party leaders will regret that decision.

From media outlets who covered Donald Trump’s campaign by focusing on his personality rather than substance, to fellow Republican presidential candidates who appeased Trump and tried to siphon off his supporters, Frum casts blame for the real estate magnate’s political rise to all corners of the conservative movement and Republican Party. Now, one year into the Donald Trump presidency, Frum holds particular scorn for congressional leaders such as Speaker of the House Paul Ryan and Senate Majority Leader Mitch McConnell who have tolerated the president’s failings as a leader in exchange for getting his support to enact legislation that advances their agenda.

“What Paul Ryan and Mitch McConnell failed to appreciate was the sheer destructive force of Donald Trump’s personality,” Frum says. “Maybe they arrogantly thought they could contain him. And they didn’t understand that this force would shake the whole political system. I think they, in a way, believe the description you see in Michael Wolfe’s best-seller (‘Fire and Fury: Inside the Trump White House’) of Trump as basically someone who’s so out of it, so unintelligent, so uninformed that he can be manipulated. And he can be manipulated about the things he doesn’t care about. But about the things he does care about, Trump is wily and powerful, and he bends people to his will. We see it again and again.”

Frum is very troubled by what he views as a growing willingness among policy makers and even conservative writers and intellectual leaders to accept statements of false information by President Trump and his staff if such statements help the movement gain more power and influence. “That’s the authentic language of authoritarianism – that the president says what he needs to survive, other people say what they need to survive, and the truth of a statement is judged by its usefulness,” Frum reasons. “That’s a dark path.”

4) America’s Foreign Stature in Jeopardy: Frum views the Donald Trump presidency as especially damaging in regard to global affairs. Specifically, he believes that the Trump administration and its policies of economic protectionism and isolationism will exacerbate what is already a diminishing role for the U.S. in the world order.

Frum observes that Trump’s election in the U.S. finds parallels in what he calls a “de-democratization” movement around the world, exemplified in the Brexit vote in Great Britain and support for authoritarian political candidates in other European nations but also evident in many other developed and developing countries. As the U.S. withdraws on the global stage, Frum sees other countries stepping up to fill the void with interests that in many cases oppose our own.

“Remember, the damage is being done at a time when the United States is playing a diminishing hand anyway,” he says. “It would take a lot of skill and a lot of wisdom to run an effective foreign policy in the U.S. in these first decades of the 21st century. If you don’t have those things, the conditions are adverse to begin with. So we may find lots of partners and friends – especially in Asia, those countries who have less of a historical affinity with the United States as other partners do – going their own way.”

5) Optimism in Trying Times: Despite the threats Donald Trump and his presidency pose to the United States, Frum remains optimistic that Trump’s time in office will not prove to be permanently damaging to the country, but instead can be overcome by political action and effective policy making in the months and years to come.

“We’ve seen in 2017 this magnificent eruption of civic activism, of the most orderly law abiding, peaceful kind,” he says. “I think we see an awareness that something has gone wrong for so many of our fellow citizens… that this new economy has brought great opportunities for some but great hardships for many, and they’re your fellow citizens and have a claim on you.”

Frum is also heartened to see that people have come to recognize once again the importance of truth in defining political positions and carrying out policy. He views the rise of “post-truth” in late 20th-century academic circles as detrimental to public discourse, and says that “one of the things we’ve learned from Donald Trump, and it’s been pounded home, is that in a democracy, the opposite of truth is not truths, the opposite of truth is lying. And democracies cannot bear it. I think we’ve all had this new awareness of the fragility and preciousness of truth. Not that we all know the truth, because it’s hard, but that we have to strive for it.” 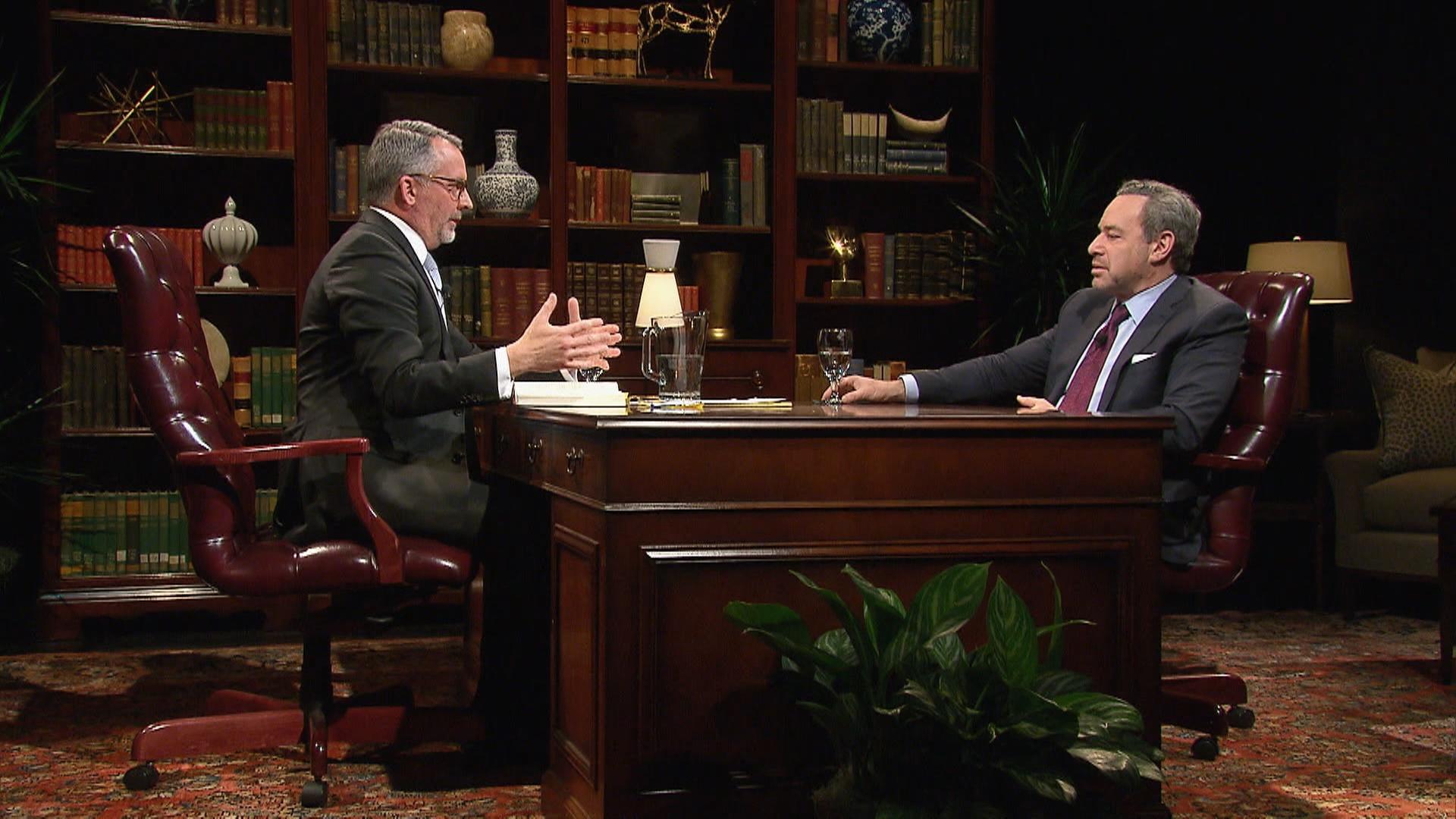