Advances in eye surgery have enabled ophthalmologists to perform complex procedures far more precisely and efficiently, helping patients recover more quickly and with better vision. Common eye diseases such as cataracts can now be repaired in an outpatient setting, as can many other conditions. Unfortunately, far too many people in Kentucky still do not schedule regular appointments for eye exams, leading to worsening vision problems that need not have developed.

In this episode of Kentucky Health, host Dr. Wayne Tuckson welcomes a Louisville ophthalmologist to discuss new trends in eye surgery and share his views on how to improve eye health in Kentucky. They are joined by a Louisville state representative, who spent a day watching the ophthalmologist practice his craft in order to further his own knowledge about the field.

Dr. Frank Burns, M.D., obtained his medical degree from the University of Missouri and completed his residency and a fellowship in corneal disease at the University of Louisville. He has practiced ophthalmology and eye surgery in Louisville for more than 20 years.

State Rep. Jason Nemes is a Republican representing part of northeastern Jefferson County and part of Oldham County. The Louisville attorney was elected to the House of Representatives in 2016. Nemes shadowed Dr. Burns for a day as part of the Greater Louisville Medical Society’s “Wear the White Coat” program.

Nemes says that it’s important for public officials to become well versed in all of the issues affecting their constituents, and that his day spent with Dr. Burns helped him to better understand current trends in ophthalmology.

“The eyes are so important to all of us, and when they’re not working right, that’s a major problem,” Nemes says. “We have some wonderful ophthalmologists in Kentucky, and it was good to get to see them do their work – not only Dr. Burns, who did a wonderful job – but also his staff, who are there to serve the patient, and also to make sure that Dr. Burns is ready, and that he knows all about the case, and that he’s prepared for the safety of the patient. It was really interesting.”

Cataracts: A Common Problem Easily Treated
“A cataract is a clouded lens in the eye,” Burns says. “Everybody has a lens when they are born – it is clear. It tends to cloud with age. Heredity, aging, cigarette smoking, sunlight exposure, certain drugs like prednisone can cause a cataract. There are a lot of different causes, trauma can cause it, but the most common is just age-related cataract where it clouds very slowly over many years. Two-thirds of people by the age of 60 have cataracts. So it’s an age-related process.”

Burns says that cataract surgery has improved by leaps and bounds over the past quarter-century. When he was training to become an ophthalmologist in the 1990s, the common procedure was called extracapsular cataract surgery, where a large incision was made to remove the clouded lens in its entirety.

Now, Burns explains, the standard procedure is called phacoemulsification; it requires much smaller incisions and no suturing afterwards. Phacoemulsification is “an ultrasound probe,” he says, “which we use to break up the cataract into small pieces and vacuum those pieces up out of the eye.”

With video cameras following, Rep. Nemes observes as Dr. Burns preps patients for cataract surgery and then performs several procedures. Burns uses what’s called a femtosecond laser to create initial incisions in the eye. Originally (and still) used in Lasik surgeries, the laser makes very small marks during preparation for the cataract surgery to “pre-form” the incisions needed to extract the clouded lens during the main procedure. It is also used to help center the artificial lens that replaces the cataract and to reduce astigmatism.

Burns says that the artificial lenses used to replace cataracts have also improved in quality over the past decade. He usually determines a patient’s normal (pre-cataract) vision through measurements taken prior to surgery, and orders lenses that can be used for near- or far-sighted patients. Most of his patients are given mild sedation but are awake during the procedure. If a patient has trouble keeping their eye still, they can request a “block” from the anesthesiologist.

Nemes says that he was amazed at how swiftly patients with cataracts regained their vision after surgery. Only once did a problem arise during a cataract surgery, and Nemes said that that’s when the training and teamwork of Burns and his assistants kicked in.

“The surgery room got a little bit quiet,” he says. “It’s kind of like it was choreographed, the movements, and Dr. Burns, he kept his cool, and he did what he needed to do, and he saved the day, so to speak, and he fixed the problem.

“You know, complications arise during surgery, and that was the only one that happened while I was there, and it highlighted for me the importance of just high-quality professionals in our health care industry. It was good to watch.”

Improving Vision Health in Kentucky
Burns says that he believes most people in Kentucky get regular eye exams, but acknowledges that “of course, those without insurance, they fall through the cracks.” While some of these folks have been able to get vision care through expanded Medicaid in recent years, and other charitable programs such as Surgery on Sunday also help, Burns says that he still sees patients who have waited too long to get their cataracts removed.

Occasionally, Burns will operate on a cataract that is solid white. A patient can’t see at all with an advanced cataract, and it also makes operating more difficult. “If you go to a developing country, you’ll see them all the time,” he says. “Go to Nicaragua or Mexico where there’s really poor health care, you’ll see people who are blind from cataracts. It doesn’t happen very often in the United States, but I do see them from time to time.”

Burns says that cataract surgery has “kind of revolutionized eye care,” but also notes that other eye illnesses remain prevalent in Kentucky.

When asked what Kentuckians can do to help reduce eye disease, Burns brings up a habit that has contributed to numerous poor health metrics in the state for decades: cigarette smoking.

“Basically, every tissue in the body is affected by cigarette smoke,” he says. “Cataracts form more quickly with cigarette smoking. Macular degeneration is worsened by cigarette smoking. Diabetics who smoke have a much higher risk of getting diabetic retinopathy. So if you just take those three things right there – I always tell my patients, another reason not to smoke is that it can make you go blind.”

Nemes doubts that a stand-alone cigarette tax will be passed in the current General Assembly, although he says he’s open to discussing it as part of a larger tax reform package. One proposed law he does support deals with driver’s licensing regulations and is backed by Dr. Burns and his colleagues in the vision community.

“We’re one of only seven states that does not re-check vision when people renew their driver’s license,” Burns says. “And I think it’s a big safety concern, especially if people’s vision changes with age.”

The legislation Burns and colleagues would like to get passed would require vision tests for drivers starting at age 40. He says that’s when most people report changes in their vision, “so it would be a perfect time to implement some type of a system.” The driver’s test would be a simple screening vision exam that, if the person does not pass it, would then require a full vision exam. Burns believes that such a law would improve Kentuckians’ overall vision health in the long run by catching problems such as cataracts or macular degeneration earlier.

In agreeing with Burns’ proposed legislation, Nemes says that driving is not a right, but a privilege. “We want to make sure that our roads are safe, not only for everybody else, but for you,” he says. “If you’re having problems seeing, you’re a danger to yourself as well, so I don’t think it’s too much to ask for folks to prove that they can see before they get on the roads.” 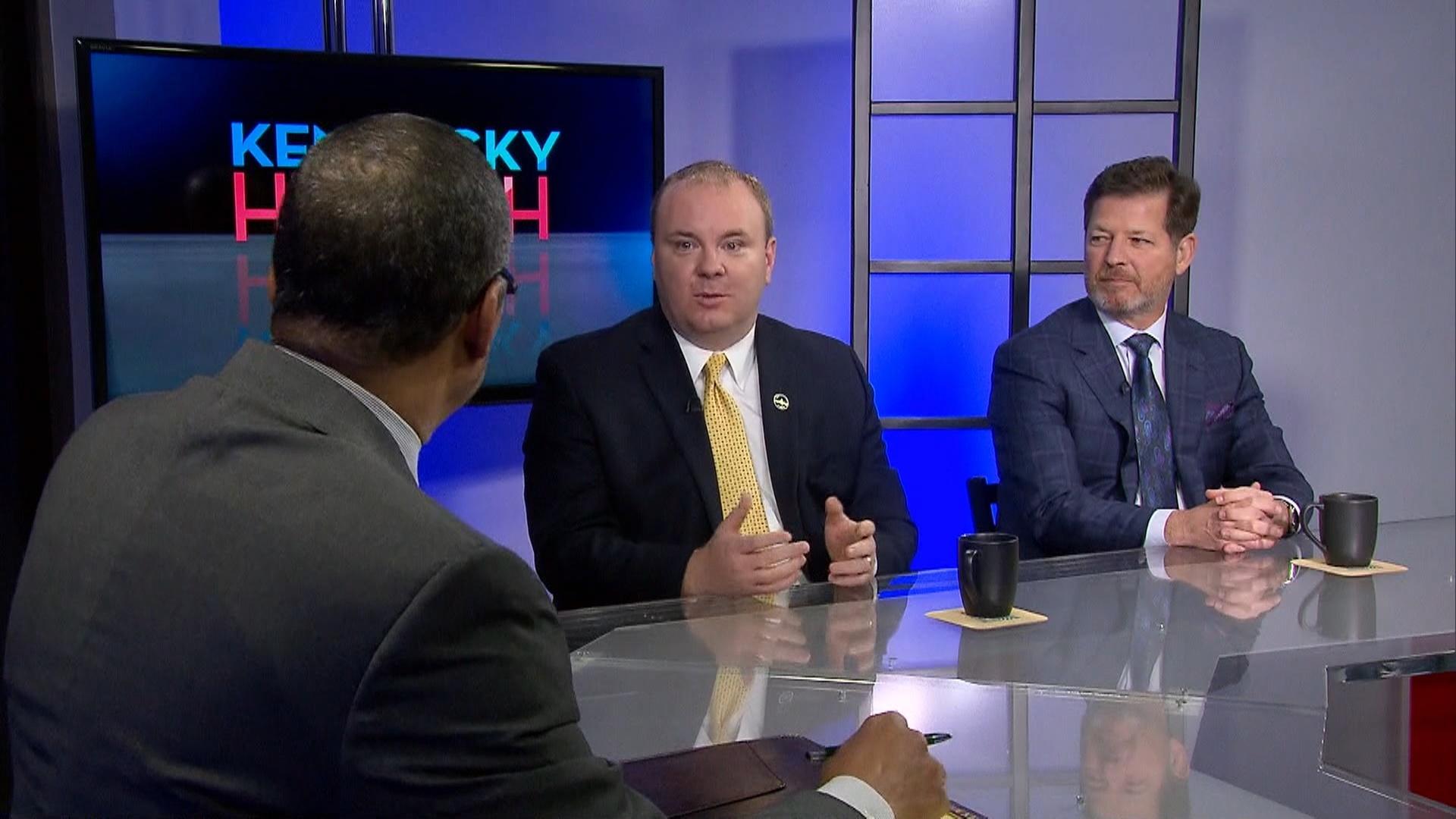