Maintaining good oral health is important throughout life, and not just for cosmetic reasons. Unhealthy teeth and gums are often the first visible evidence of larger, systemic conditions in the body, and can affect the severity of chronic maladies such as diabetes and even Alzheimer’s disease.

If a person follows a recommended brushing and flossing regimen, and refrains from harmful oral habits, the teeth and gums should last a lifetime, and many of the problems that crop up in old age can be avoided. In this episode of Kentucky Health, host Dr. Wayne Tuckson talks with two experienced dentists to learn more about the crucial role the mouth plays in a person’s overall well being and about what to do – and what to avoid – in order to achieve oral health.

Robert Henry, DMD, MPH, is the chief of dentistry at the Department of Veterans Affairs Medical Center in Lexington. He is also a founding member of the Lexington Mission Dental Clinic. Dr. Michael Mansfield, DMD, is an assistant professor at the Department of General Dentistry and Oral Medicine at the University of Louisville’s School of Dentistry.

Dr. Tuckson starts the discussion by reviewing the origins of the old saying “long in the tooth,” which began when horse traders examined the animals’ teeth and gums to determine their age. Dr. Henry acknowledges that gum recession is just as prevalent in human beings as it is in horses, noting that 98 percent of persons 65 and older have at least some gingival (gum) loss.

This is detrimental for two reasons, say the guests. As the gums recede, more of the tooth is exposed. Henry says this part of the tooth lacks enamel, which he says is the hardest surface in the body, more sturdy than bone. The newly exposed tooth is part of the root, which is covered with a calcified substance called cementum that is not nearly as hard as enamel. This makes the tooth more susceptible to decay.

Dr. Mansfield points out that receding gums may be an early sign of periodontitis, a serious condition where the gums become infected and eventually destroy the bones that support the teeth and the jaw’s structural integrity. This can lead to tooth loss and a host of other problems – Mansfield compares it to a house losing its foundation.

A Gateway to Systemic Health
Kentucky has a high rate of edentulism, or complete tooth loss, according to Henry and Mansfield. Mansfield says the national average is around 20 percent for adults age 65 and older.

The Kentucky Oral Health Survey, published in 2005, examined the geriatric population in the commonwealth and found widespread prevalence of edentulism.

“Back in 2005, about 44 percent of our elders, people 65 and older, had no teeth. They were completely dentureless,” Henry says. “Now think about that for a second. That’s almost 50 percent of our elders had no teeth whatsoever. That number now has dropped to between 30 and 35 percent. So, [the decline is] significant, almost a 10 percent drop in 10 years, which is a big deal. But unfortunately, we still rank as one of the highest states in the nation with that high prevalence of tooth loss.”

Henry says Kentucky now ranks around seventh or eighth in the nation in edentulism. He says the 2005 study also revealed how different populations of older folks had varying degrees of tooth loss. Those in nursing homes or who were confined to their own homes with chronic illness had a greater incidence of edentulism than those who were living independently, and that disparity continues today.

The dentists discuss several slides that show cases of dental caries (tooth decay) and gum disease. These unsightly conditions are usually evidence of more systemic problems, Henry and Mansfield note. The crucial element in gum disease – inflammation of tissue – is often present in chronic ailments such as rheumatoid arthritis and diabetes.

Excessive plaque forms on teeth when a regular brushing and flossing schedule is not maintained. For older persons, tooth decay can become devastating, Henry says, as the microbes that form in plaque can travel to other parts of the body.

“These same plaque bacteria, if they become systemic…can actually lodge on vessels in the heart, carotid arteries in the neck. You can see this in the kidney, and one of the prevalent things we see in the nursing home is in the lungs,” Henry says. “And, if these seed and they are not cleaned off daily, that plaque can cause aspiration pneumonia, which is one of the more common causes of death in our nursing home population.”

A common denominator in tooth decay for senior citizens is xerostomia, or dry mouth. Henry points out that over 500 prescription medications list dry mouth as a side effect. He says older patients who have a chronic disease can have a co-morbidity issue as tooth decay is brought about by dry mouth.

Poor eating and drinking habits can also lead to an increased risk of tooth decay for all ages, the dentists warn. But Henry says that the effects of dry mouth and a sweet tooth can be treated with rigorous oral hygiene.

“The old adage that we talk about in geriatrics is, ‘A clean tooth doesn’t decay,’” he says. “So that means that if that plaque is brushed off, despite a person being completely xerostomic, if you’re adding fluoride to the mixture, you won’t have this kind of situation.”

Gum disease develops over time and can cause permanent and grave problems if not treated, Mansfield says. A slide showing bright red, receding gums and exposed tooth roots illustrates the severity.

“Gingivitis is the inflammation of the gums only, where there would not necessarily be bone loss,” Mansfield observes. “Once you get bone loss, we tend to speak of that in terms of periodontitis, where you are losing foundation. Gingivitis you can think of as being reversible. [With] periodontitis, you lose the foundation, [and] it’s hard to put it back – you can’t do that.”

In addition, one of Henry’s colleagues at the University of Kentucky published a paper about five years ago showing the connection between periodontitis and Alzheimer’s disease.

Habits to Follow and to Quit
Henry and Mansfield emphasize that certain assumptions relating to proper oral hygiene are mistaken, and can in fact make tooth decay and gum loss more likely.

Henry warns against using whitening toothpaste, saying that it is “very abrasive” and can remove tooth enamel along with plaque during brushing. He and Mansfield also advise people to never use medium- or hard-bristle toothbrushes. They say brushing with such instruments wears against the gums and causes gum recession over time. Medium- and hard-bristle brushes are still sold to the general public, Mansfield says, but dentists don’t give them out after checkups.

“Most of the companies, if you talk to the representatives, they know better than to try to market those to oral health care professionals, but yet you can get into these different environments where they sell these,” he says. “So I guess we’d like to raise a flag of caution for people not to use medium or hard [bristle] toothbrushes.”

Both dentists favor the use of electric or sonic toothbrushes, provided they have either soft or very soft bristles (the diameter of the brush bristle determines its classification, Mansfield says). Mansfield also talks about the development of “smart toothbrushes,” which can keep track of regular brushing and oral care via an app. These will be useful for caregivers who want to monitor their senior patients’ habits.

Henry tells people to avoid soft drinks – even sugar-free drinks – due to their acidity, and adds that sports drinks are just as bad for the teeth. Smoking and/or chewing tobacco is also very harmful to oral health. Kentucky’s high ranking in tobacco use partially explains its similar status in tooth loss, Henry says.

Mansfield mentions the American Dental Association’s “Two times two” campaign, which recommends brushing and flossing two times a day for two minutes per session. This, he says, is the best maxim to follow throughout life in order to ward off any problems relating to aging and oral health.

“The message to give, especially with all of the research that is coming out now on this oral-systemic connection is, you know, this just isn’t your teeth that you’re affecting,” he concludes. “You’re affecting your overall body health, whether it’s the increased likelihood of getting rheumatoid arthritis, or it be an exacerbation of chronic kidney disease, whether it be an acceleration of Alzheimer’s disease effects. … There’s just a number of things that can be affected by you as a 20-year-old not taking care of your teeth.”

An extensive report on Kentucky’s oral health issued in spring 2016, conducted by the Center for Health Workforce Studies at the School of Health, State University of New York at Albany, contains recent data on all age groups in the commonwealth, including seniors. Access the report . 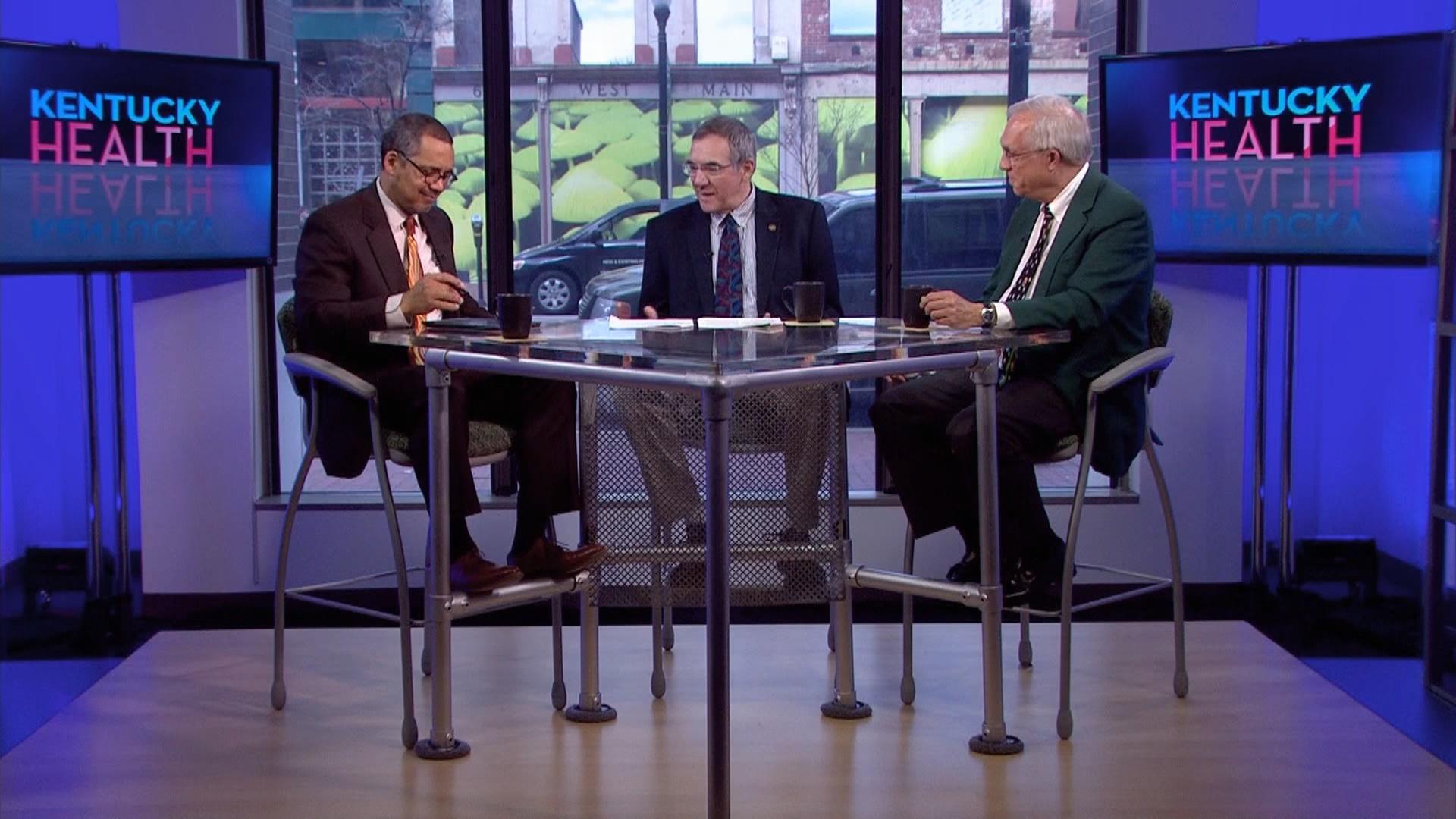