The program explores Kentucky's contributions to The Index of American Design, a Federal Art Project work relief program established in 1935 by President Franklin D. Roosevelt to document what was uniquely American about utilitarian art in this country.
Season 8 Episode 1 Length 27:41 Premiere: 01/26/17

People often think of parks, roads, and murals when they think of projects done by the Works Progress Administration (WPA). Less well known are the watercolor renderings in the Index of American Design.

The Index was part of the Federal Art Project work relief program established in 1935 by President Franklin D. Roosevelt to document what was uniquely American about the nation’s decorative and utilitarian art.

Even before the Great Depression, cultural observers in the 1920s were beginning to study what made American art distinctive, and they wanted to document the old crafts before they were lost to history.

Stacy Hollander, chief curator at the American Folk Art Museum in New York, said the Federal Art Project Unit One was tasked with establishing an index of American design from colonial times to about 1900. “It became a repository of the kinds of art that had never been documented before,” she said.

Erika Doss, Ph.D., a professor of American studies at the University of Notre Dame, said the index documented American art made before 1900, all the way back to the colonial era. “I think a big part of the Index is the idea of cultural democracy. And also the sense in the 1930s of using art as a way to keep the nation together, at least on cultural terms,” she said.

Doss said there was concern that without work, the unemployed —- who at one point totaled a quarter of the working age population – would challenge American capitalism and democracy itself. “Work becomes something that FDR gets on the table right away,” she said.

About 400 artists were put to work on the index, producing over 18,000 renderings. Famous artists who got their start in the Federal Art project include William de Kooning, Jackson Pollack, and illustrator Thomas Hart Benton.

“Artists were able to make a living and feed their families, which is what everyone wants to do,” said Peavler. “But they were able to do it plying the trade that they had trained for. … I think it’s a credit to FDR that he realized the value of art and was willing to make paying artists to do their work a part of a federal stimulus program.”

Shelly Zegart, a Louisville curator and appraiser, said Cahill was ahead of his time by hiring women. “His bringing those women to the fore with the development of the Index made a huge difference in the kind of objects that were identified and rendered,” she said.

Ramona Javitz, head of the picture collection at the New York Public Library, and Art Deco textile designer Ruth Reeves, came up with the idea of documenting American folk art. “They go to Holger Cahill and present the idea and he immediately is enthused, based on his earlier developed sense of how important folk art is in America,” said Doss.

He also brought in Constance Rourke, who wrote extensively about American culture. She traveled the nation to set up the Index.

Kentucky and the Frazier Exhibit

Hirsch said the work in Kentucky was very important: “There was as much design and aesthetic achievement in ordinary objects in Kentucky, at least as much, perhaps more as anywhere else.”

Kentucky’s index was curated by Adele Brandeis, niece of Supreme Court Justice Louis Brandeis of Louisville. She and her committee traveled the state and chose the objects to be depicted in renderings.

Doss said many items of exceptionally high quality were made by immigrants in the 1800s. “So when the Index was put together in the 1930s, a lot of these objects were in private homes and in museums. They’re still here in Kentucky, and so they become exactly what the Index is looking for,” she said.

The next step was to have artists create watercolor renderings of the original artifacts. “These artists were asked to create art out of works of art,” said Brigid Muldoon, chief curator at Frazier.

Watercolor was seen as a more appropriate medium than photography for 18th and 19th century artifacts, It also meant employment for illustrators and graphic artists who were used to that kind of work, according to Doss. “They work fast. They work clean. They have very precise ideas about how to take an image and get it on to those particularly sized pages. They know how to do this work,” said Doss.

Many observers note that the watercolors look like photographs. “The aim of the rendering was to make you feel and believe that you were experiencing the work of art,” said Hollander.

Art historian Allan Weiss went to the National Gallery of Art, which houses the Index, and worked with the Frazer History Museum in Louisville to create its exhibit. “Kentucky By Design” features more than 85 original and facsimile watercolor renderings, paired with the actual objects and artworks depicted. The exhibit runs through Feb. 12, 2017.

The watercolor renderings on exhibit haven’t been seen by the public in 80 years.

“There were about 300 watercolors done in Kentucky. They were never exhibited,” said Peavler. “They live at the National Gallery in Washington, and so all the ones that we’re showing in this exhibition got framed up particularly for the exhibit.”

Among the items rendered in watercolor were furniture like a sugar chest, a powder horn, toys, baskets, and quilts. “Most of these things you see in the Index were made because they needed to use them,” said Weiss. “Quilts, coverlets, weather vanes, cooking utensils, these were all things that were made to be used.”

A number of important quilts were created in Kentucky. Louisville curator Zegart said women expressed themselves through quilts. “Women did not have much of a voice in the life of our country in the 19th century and the late 18th century,” she said. “Quilts gave them their voice.”

About 90 of the Kentucky renderings are from Kentucky’s Shaker communities. An added benefit: The renderings made of the Shaker objects, Muldoon said, helped preservationists restore the Shaker villages in Kentucky.

Doss said the simple lines and bright colors used by the Shakers fit in with the modern tastes in the 1920s and 1930s.

In the 1930s the art world was beginning to develop a deeper appreciation of the artistry in utilitarian objects, an appreciation that continues today. “I think that one of the points here is to take time to look at what’s around you and to see the beauty in the everyday,” said Peavler.

The Index serves as an encyclopedia of design for future generations. “A spare aesthetic, an aesthetic that is stripped to essences, is really part and parcel of the American character, and it has been since there has been a nation,” said Hollander.

Interviews and performance segments take you into the life of New York City Ballet principal dancer Wendy Whelan, a Louisville native who began dancing with the Louisville Ballet Company as a child.

Of Hands and Hearts: The Kentucky Guild of Artists

A variety of artisans from across Kentucky discuss their work, the value of their membership in the guild, and the history and goals of Kentucky's oldest art and craft organization. A 2013 KET production.

Celebrating its 50th year, the renowned repertory theater has become a local institution with a national reputation. With an emphasis on new American plays and a strong apprenticeship program, run for years by Jon Jory, the theater has launched numerous careers.

Raised in the Western Kentucky coalfields during the Great Depression, songwriter and guitarist Merle Travis grew to worldwide stardom by the 1940s and 1950s. Today he is one of country music's most celebrated stylistic pioneers. His life story and his musical legacy are the focus of the documentary, "Merle Travis: Guitar Man". Perhaps best recognized as the original balladeer of the classic "Sixteen Tons" as well as hits like "Nine Pound Hammer" and "Dark as a Dungeon" - which all drew inspiration from the struggles of coal miners - Travis, who died in 1983, is also celebrated as the developer of a unique thumb-picking guitar-playing style eventually dubbed "Travis pickin.'" 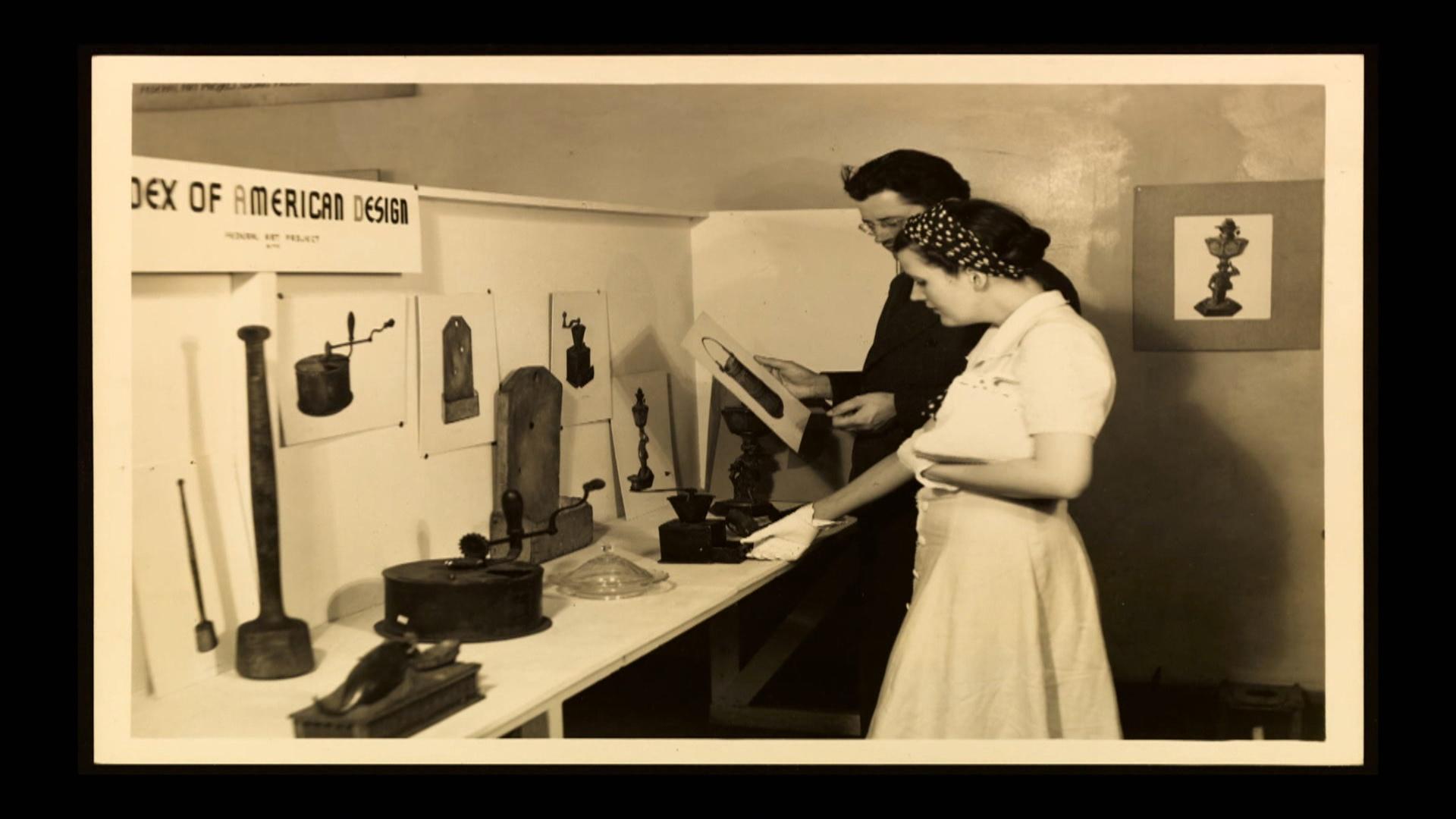