When author Bobbie Ann Mason was growing up on her family’s dairy farm in Mayfield, she knew of no local writers.

“The radio, not the library, was my outlet,” she said. “My deepest longings and aspirations were expressed in pop music.”

Today’s budding authors and artists, however, learn about their heritage through the Kentucky Arts Council, which brings poets, musicians, and artists into Kentucky schools, Mason said. “When they hear poetry and see sculpture and listen to someone play the dulcimer, students can discover worlds beyond themselves and in themselves,” she said.

Mason spoke of the importance of the arts at her induction into the Kentucky Writers Hall of Fame. The 2016 induction ceremony, held Jan. 28 at Lexington’s Carnegie Center for Literacy and Learning, was taped by KET for broadcast. The ceremony honored Mason and the late songwriter Jean Ritchie, along with Kentucky writers from the past.

Mason, whose works include “Feather Crowns,” “In Country,” and “Shiloh and Other Stories,” is credited with a movement in fiction called “shopping mall realism,” in reference to its realistic regional dialogue.

“I am not a public speaker, you should probably know that,” Mason told the Carnegie Center audience. “Writing is something done alone. And you don’t think people will actually read it, or even know about it. You’re busy trying to get the words right and then one day you look up and wonder that somebody, in effect, has read your mind. And I’m very grateful that you’ve noticed. This is indeed a high honor.”

However, she said writers honor the readers as well. “It’s said sometimes that reading may be the most intimate connection you can make with another mind or sensibility,” she said.

Reading is also done alone, she said. “It’s a thing of wonder, this bond between writer and reader. It’s like telepathy.”

Praise for the state’s rich literary heritage, and words of caution
Kentucky has proven to be fertile ground for artists and writers, Mason said. “A rich heritage of writers occurs when creative people meet an abundance of irresistible or urgent story material,” she said.

Mason recalled the genesis of her novel “Feather Crowns,” based on a true story of a local Western Kentucky woman who gained national fame when she gave birth to quintuplets.

Mason spoke of the region’s famous writers: Robert Penn Warren, author of “All the King’s Men,” was born in nearby Guthrie, and the poet Allen Tate and his wife, Caroline Gordon, lived in Clarksville, Tenn., where they entertained the likes of Ernest Hemingway and F. Scott Fitzgerald.

The late historian Thomas D. Clark believed that Kentucky needed another great political novel like “All the King’s Men,” Mason said, and he urged her to write it. “I am not the right one to do it,” Mason said. “I’m not motivated to do it. But somebody has to do it. And maybe soon, the way things are going.”

The elimination of state funding for the Arts Council turned out to be an unfounded rumor, but Mason said arts funding was not “out of the woods yet.”

Mason worried aloud that Gov. Matt Bevin did not appreciate the arts. “And why do we have the impression lately that our new governor thinks none of our works is worth a red cent? Or deserving of a beautiful building like this? Or even a parade?

“I have to say I was personally disturbed by the remarks this week trivializing the study of French literature,” she said, referring to widely quoted remarks by Gov. Bevin saying that the state should offer incentives to students studying electrical engineering instead of French literature majors.

“Anyone who dismisses great works like ‘Madame Bovary’ … risks diminishing his life,” Mason said. “Education and the arts are supposed to make us open our minds, not retreat into a narrow slot determined by performance-based funding.

“Here at the Carnegie Center, I can study French, and try to read Nobel Prize winner Patrick Modiano’s novels in French. Or someone who can’t read much at all can come here and learn how to read with a tutor – because this is the Carnegie Center for Literacy and Learning. You start with literacy, and you never stop learning. This is where you go. This is where it’s at.”

Also inducted into the Hall of Fame:
– Folk singer/songwriter Jean Ritchie (1922-2015), whose books include her memoir, “Singing Family of the Cumberlands,” as well as numerous songbooks like “The Swapping Song Book” and “The Dulcimer Book.” Born in Viper, the youngest of 14 children, Ritchie graduated from the University of Kentucky with a degree in social work. She moved to New York to work, and drew on her knowledge of family songs to entertain the children in her charge. Her reputation as a folk singer grew, and she became a fixture on the Greenwich Village coffeehouse scene.

Ritchie released her first solo album in 1952, and during her 75-year-long career, she performed at Carnegie Hall, London’s Royal Albert Hall, and the Newport Folk Festival, becoming an icon of folk music. She published 10 books between 1964 and 1988, and over 50 years she recorded 33 albums.

– James Lane Allen (1849-1925), a best-selling American novelist and short story writer. Born near Lexington, his works include “A Kentucky Cardinal,” “The Reign of Law,” and “King Solomon of Kentucky.” He spent his adult life in New York, but 14 of his 19 books were set in his home state.

– Harlan Hubbard (1900-1988), whose works include “Shantyboat” and “Payne Hollow: Life on the Fringe of Society.” He and his wife, Anna, built a shantyboat in 1944 and spent the next eight years traveling the lengths of the Ohio and Mississippi. In 1952, they returned to Kentucky and carved out a self-sufficient homestead for themselves on the river, at Payne Hollow in Trimble County.

– Alice Hegan Rice (1870-1942), author of “Mrs. Wiggs of the Cabbage Patch.” She was born in Shelbyville and lived in Louisville most of her life. Her “Cabbage Patch” novels, which were based on her volunteer work in one of the city’s poorest neighborhoods, inspired movies and stage productions.

For more than three decades, players and fans of traditional music have assembled annually at the J.P. Fraley Mountain Music Gatherin' in Olive Hill for performances by master musicians and rising young stars as well as come-one, come-all day and night jam sessions.

A behind-the-scenes look at the drama, suspense, and fun of the first International Mystery Writers' Festival, held at Owensboro's RiverPark Center in June 2007. This KET production follows several plays, including an award-winning entry by a Kentucky native, from rehearsals to final presentation.

Visits the homes of three Kentucky writers for conversations on inspirations and the writing process. Sheila Williams of Newport is the author of Dancing on the Edge of the Roof and On the Right Side of a Dream. Kirby Gann of Louisville is the author of The Barbarian Parade and Our Napoleon in Rags. And Silas House of Eastern Kentucky is the author of Clay's Quilt, A Parchment of Leaves, and The Coal Tattoo. 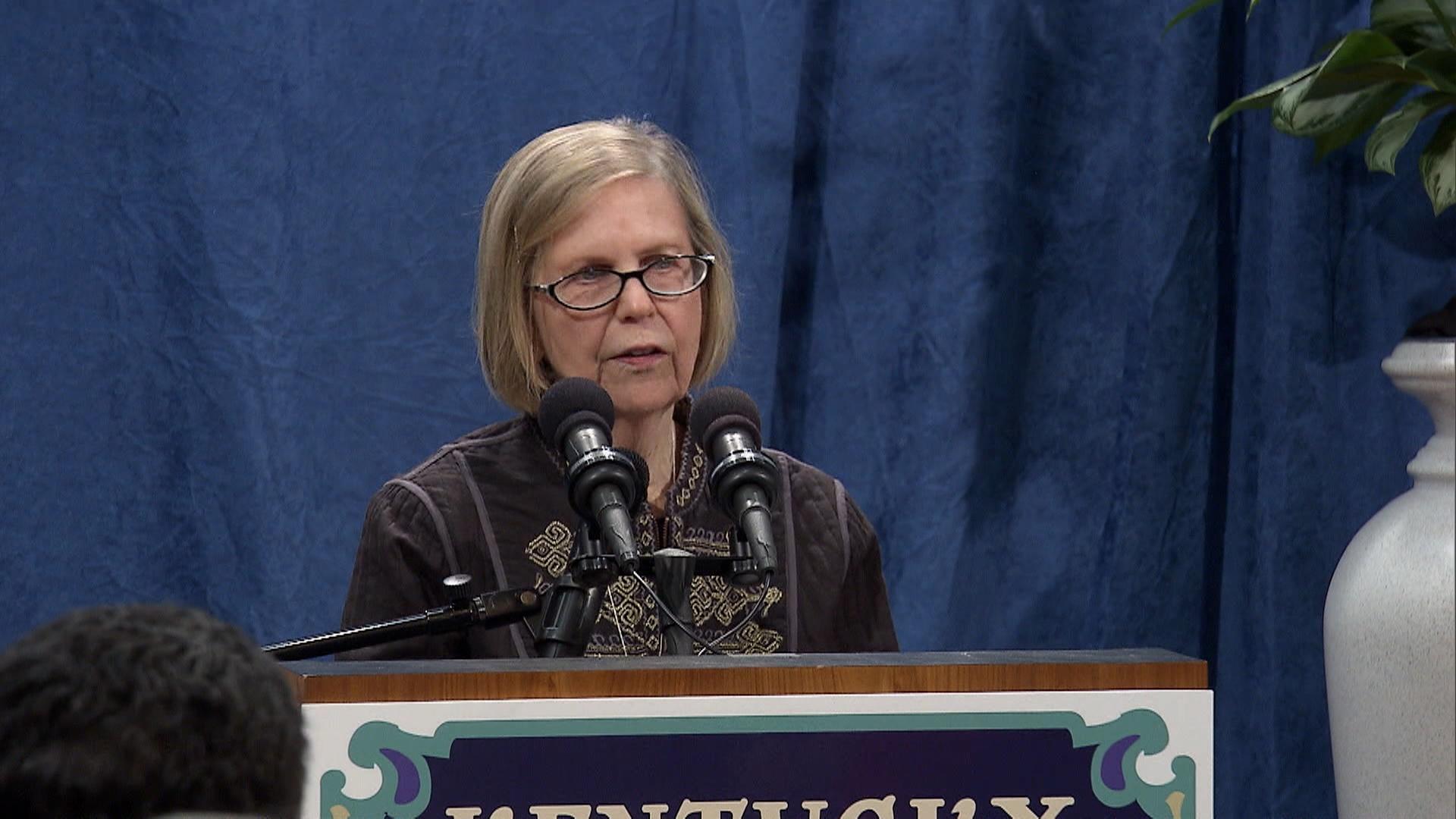