It's the opening day of the 2019 Kentucky General Assembly and the fate of public pension reform looks anything but certain.

Gov. Matt Bevin and Republican leaders remain at odds over the failure of last month's special legislative session on the pension crisis. Meanwhile some lawmakers also fear that this year's 30-day session won't allow them enough time to find consensus on a new reform measure and address other key issues like school safety and fixes to the state's tax code.

Bevin Reflects on the Special Session
On Monday afternoon Dec. 17, Gov. Bevin announced that he was calling the legislature into special session, beginning at 8 pm that evening. Just days before, the Kentucky Supreme Court ruled that Senate Bill 151, the wastewater treatment measure turned pension reform bill, was unconstitutional because lawmakers didn't give the legislation the required number of readings before passing it last March.

Bevin says he met with Republican legislative leaders multiple times before and after the court ruling. He says the lawmakers knew of his plans to call a special session and to offer a version of Senate Bill 151 that removed provisions the Bevin Administration feared could make the reforms a target of future court challenges.

Bevin contends a lack of legislative will -- not lack of planning -- doomed the abbreviated bill, called House Bill 1 in the special session.

“To me it’s concerning that the very people who passed a bill earlier that year didn't have what it took to do the very same thing again, or even a lesser version of it,” says Bevin.

But last week Senate Minority Floor Leader Damon Thayer (R-Georgetown) told the Associated Press that Republican leaders had urged Bevin not to call them into special session. Thayer says the leadership was concerned about the timing, coming a week before Christmas, and the lame-duck nature of the session.

The governor acknowledges that Thayer and some other lawmakers didn't want a special session at that time.

"But there were many that did [want to convene]," says Bevin. "Many that recognized perhaps their best chance to do this would have been in that session, and they failed.”

Regardless of how the session fell apart, Bevin says the pension problem still exists and fixing it becomes ever more important as state and county governments, quasi-governmental agencies, and local school districts and public universities face spiraling pension costs for public employees and teachers.

Now that the incoming legislature will include 32 new House members, Bevin fears it will be even harder to pass a new pension bill.

“I don't have a great sense of confidence that they can do it with more votes needed from fewer people who are less informed,” says Bevin, “and yet the problem is getting bigger by the day.”

The governor dismisses criticism that the state wasted some $120,000 in taxpayer money for a special session that barely lasted 24 hours. He contends the first week of the regular session will cost at least twice that, but will result in little more than organizational meetings and ethics training sessions. He says those dollars pale in comparison to what the state will have to pay if the pension crisis is not resolved.

“The reason we have the worst-funded pension system in America is because previous governors and previous legislators for the last 25 years have ignored this problem,” says Bevin. “We can’t afford to ignore it any more... This can only be addressed by legislative action.”

More of Renee Shaw’s interview with Gov. Bevin will air on Legislative Update on Jan. 11 at 8:30 p.m. on KET.

The View from Lawmakers
On KET, Republican leaders declined to discuss specific details of their conversations with the governor about the special session.

"My recollection differs somewhat from him, but I don't think it behooves anyone to rehash that," Senate President Stivers says.

House Speaker Osborne agrees that it's counterproductive to debate what happened last month, but he says he and his caucus agree that pension reform is an urgent issue.

“We came back in fully ready to re-affirm our vote on Senate Bill 151, and our members were comfortable in doing that,” Osborne says. “But we got back in and found out that that wasn't the piece of legislation we were faced with and there were a number of significant changes. It did open up debate within our caucus about which way we needed to go on overall pension reform.”

When it became clear that consensus on the scaled-back reform bill wasn't possible, Osborne says there was no sense in proceeding with the special session. He called for an adjournment a day after lawmakers convened in Frankfort.

Democrats say they had no warning that a special session would be called. House Minority Floor Leader Adkins says he first heard about it shortly before Bevin held his press conference to announce the session. He contends the governor failed to do the proper groundwork before calling lawmakers to Frankfort.

Senate Minority Floor Leader McGarvey says Democrats were also kept in the dark about what legislation was actually being proposed. Given the governor’s business background, McGarvey says he was surprised by what he sees as Bevin’s lack of preparation for a special session.

“[The governor] still has yet to recognize that the legislature is the equivalent of his board of directors,” McGarvey says. “You don't call your board of directors together on four hours notice with no agenda and expect to get anything done.”

All four lawmakers also take issue with Bevin's statement that legislators have failed to address the pension problem for decades. Stivers says Senate majority and minority leaders have raised the issue since at least 2007. And McGarvey says lawmakers enacted changes to the public employee pension system in 2008 and 2013, and to the teacher plan in 2010.

But Osborne says lawmakers are responsible for not properly funding the pension plans in earlier years and for failing to hold pension fund managers accountable for not controlling investment costs.

Stivers says the legislature simply provided the funds that previous governors and pension administrators requested. He says where lawmakers failed was in not questioning the overly optimistic actuarial assumptions the pension systems used at the time to predict payroll growth and rates of return on investments.

What's Next for Pension Reform
Although Republicans were set to re-enact Senate Bill 151, Democrats remain skeptical of the legislation. Adkins says he's still waiting to see an actuarial analysis on that plan so lawmakers can better understand what impacts it might have on the estimated $40 billion in unfunded liabilities across the various public pension systems in Kentucky.

Once the unfunded liability is paid off, McGarvey says there's evidence that the current system would be cheaper to operate than the one that SB 151 would create by placing newly hired teachers into a hybrid cash-balance plan rather than a traditional defined-benefit pension plan.

“We need to come together as Democrats and Republicans in the legislature and at least agree on a common set of numbers,” says McGarvey. “What is the problem, what are the costs, and where can we create opportunities.”

Adkins contends that the earlier pension reforms are creating positive results through improved investment returns and full funding of the actuarially required contributions.

“We are on a path of recovery, in my opinion,” says Adkins. “Those changes, when we made them, we had the debate that this wouldn't happen overnight, but if we stayed with this path of what we put in those reforms of [2013] that these systems would recover.”

But Osborne cautions against being too optimistic about current investment returns.

“We have to be reasonable about how we look at any of these returns,” says Osborne. “A year or two of returns is not what is going to turn the system around. Ultimately it will be the money that we put into it.”

Osborne says returning House Republicans are comfortable with voting for SB 151 again, but he says he owes it to the 32 new House members to reopen debate on pension legislation.

In addition to more money for the systems, Stivers says pension reform will also require structural changes to fully address the problems facing the retirement plans. He says it's possible for lawmakers to tackle an issue as weighty as pensions in a short, 30-day session. He adds that it wouldn't necessarily be a failure if lawmakers don't enact reforms in the regular session.

“If we don't get a pension bill, then we'll be very close,” says Stivers, “and then can look at the governor and say, ‘We’re ready to call a special session and do it in five days.’”

Other Legislative Priorities
Beyond any potential actions on pension reform, Osborne says he expects lawmakers to do some "clean up" of the tax overhaul package passed by the 2018 General Assembly. He says they want to address how sales taxes are applied to non-profit organizations as well as some double-taxation issues that resulted from the original bill.

Stivers says he too wants to "smooth off the rough edges" of tax reform by also looking internet sales taxes and the bank franchise tax, which he says puts Kentucky financial institutions at a disadvantage to banks in other states.

Republicans continue to hold a distinct advantage in both chambers of the General Assembly. Still Democrats hope to promote several measures in the 2019 session. Adkins says the priorities for House Democrats include school safety, funding for public education and workforce development, medical marijuana, and fixes to the tax overhaul package. There are 39 Democrats to 61 Republicans in the lower chamber.

In the Senate, Democrats only hold nine of the 38 seats. (A special election is scheduled for March 5 to fill the seat vacated by Pikeville Democrat Ray Jones, who resigned after being elected Pike County Judge-Executive.) McGarvey says his caucus will present a legislative agenda that includes school safety as well as bills relating to sports gaming, medical marijuana, and an increase to the state's minimum wage. 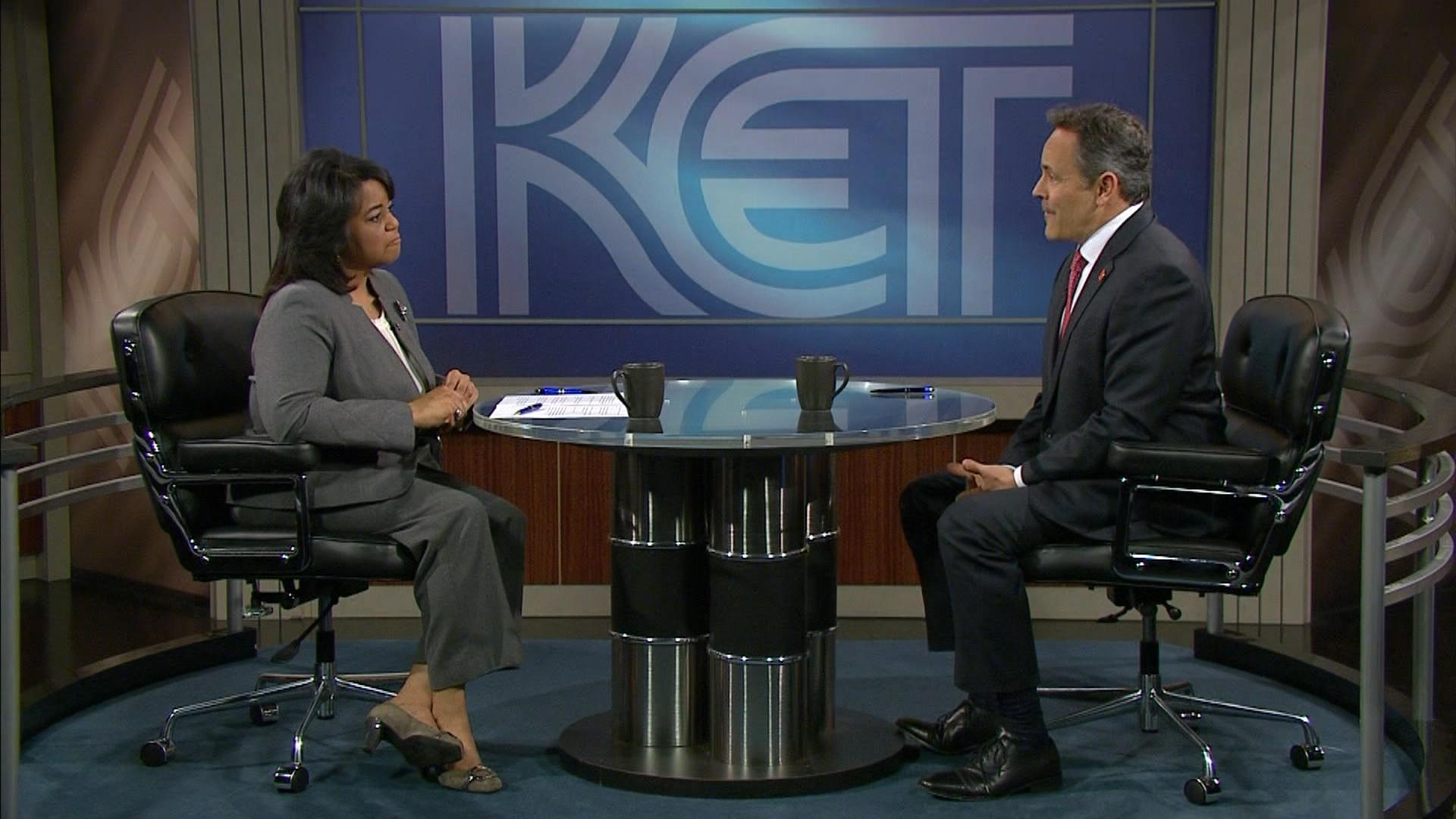