Andy Beshear is a graduate of Vanderbilt and the University of Virginia School of Law. After passing the bar he worked for an international law firm in Washington, D.C., and now is in private practice in Louisville. Beshear’s civic activities include service on the boards of Prevent Child Abuse Kentucky, the Governor’s Scholars Program, the University of Louisville, and Greater Louisville, Inc.

“I’m in this race because I want to build stronger families and safer communities,” Beshear says. “We do that by addressing challenges that can face any Kentucky family regardless of where they live… and regardless of what political party they’re in.”

State Sen. Whitney Westerfield is in his first term representing Christian, Logan, and Todd Counties. In Frankfort, he serves as chairman of the Senate Judiciary Committee. Westerfield graduated from the University of Kentucky and the Southern Illinois University School of Law. He was an Assistant Commonwealth’s Attorney in Christian County for five years, and now works in private practice in Hopkinsville.

“I’ve gotten here because of God’s grace and hard work,” says Westerfield. “I want to work with the next legislature as the [attorney general] on those polices that make Kentucky safer, as I’ve done as a legislator already.”

Priorities for the Office
In addition to working more closely with the General Assembly on policy issues, Westerfield says he would lobby lawmakers for more money to fight cybercrimes like data breaches, identity theft, and scams as well as Internet crimes against children. He says state authorities only have enough funding to investigate about 2 percent of child pornography online.

Westerfield also says he would make the attorney general’s office more active in fighting what he sees as regulatory overreach that impacts coal mining and farming in the commonwealth.

“There are examples… where the state or the federal government encroaches or exceeds authority beyond what it should to the detriment of the people of Kentucky,” says Westerfield. “We need an AG that’s geared-up and ready to fight those fights without worrying about political consequences.”

Beshear says his top priority will be to address what he calls the epidemic of child abuse. He says Kentucky is first or second in the nation in the incidence of abuse and exploitation of children. He also wants to strengthen drug-related prosecutions and increase treatment opportunities for addicts. He says the drug crisis has shifted from prescription pills to heroin, and he now fears a rise in the use of the narcotic pain reliever Fentanyl as well as synthetic drugs.

As a final priority Beshear says he will fight fraud and scams that target senior citizens. He says his experience as a corporate attorney has prepared him to be attorney general.

“I’m battle tested, I’ve been in the largest litigations, I’ve taken on government and I’ve won,” says Beshear. “I have the skills to take on the most complicated actions in front of the office.”

County Clerks and Religious Freedom
After Rowan County Clerk Kim Davis made national headlines for her refusal to issue marriage licenses to same-sex couples because of her religious beliefs, many social conservatives called on Gov. Steve Beshear to intervene to protect the religious liberties of county clerks in the state. They want Beshear to use his executive authority to remove clerks’ names from marriage certificates, or to call a special legislative session so lawmakers can amend the appropriate statutes.

Andy Beshear, who is Steve Beshear’s son, says governors can’t use executive actions to amend state statutes, so they don’t have the authority to change what names appear on marriage license forms. He also opposes the call for a special legislation session because of the estimated $300,000 it would cost taxpayers. He says lawmakers can wait until they convene in January to debate changing the licensing process.

Westerfield says the licenses must be issued, but he argues there should be a way for clerks to do that without violating their personal beliefs. He contends that Kentucky’s Religious Freedom Restoration Act, which he voted for, protects the rights of county clerks who have religious objections to same-sex unions. Westerfield supports a special legislative session and says there are ways to reduce the costs of convening lawmakers.

Campaign Finance Accusations
With the latest Bluegrass Poll showing Beshear and Westerfield tied at 38 percent, voters can expect a blitz of TV ads for both sides in the remaining weeks of the campaign. Beshear entered the race with a significant fundraising advantage and has secured some $2.7 million for his campaign. In contrast Westerfield has raised less than $150,000, but he has benefited from a multi-million dollar ad buy from the Republican Attorneys General Association.

That leaves both candidates finding fault with their opponent’s financial backers.

Westerfield claims that Beshear is getting money from corporations that might be investigated by the attorney general’s office, posing potential conflicts of interest for the Democrat. Westerfield also alleges that some of Andy Beshear’s contributors may have received perks from his father, Gov. Steve Beshear, in exchange for campaign contributions.

“I freely admit that I’ve had a hard time fundraising when I can’t give board appointments and I can’t promise road projects,” Westerfield says. “I can’t compete with that. I’ve been campaigning against Andy and fundraising against Steve.”

Beshear says he’s proud that 4,500 Kentuckians have contributed to his campaign and all of his donors are listed on his website so voters can hold him accountable if he is elected.

“I can promise you that no contribution, no matter how big or small, will ever impact any decision I make in that office,” says Beshear. “Every decision we make will be based on what’s the law and what’s right for Kentucky families.”

At the same time Beshear criticizes how the Republican Attorneys General Association (RAGA) has supported his opponent, which he says has funded 95 percent of Westerfield’s campaign. He says RAGA gets money from billionaire libertarians Charles and David Koch, tort reform advocates, and corporations including Marathon Oil. Beshear alleges communication between Westerfield’s campaign and RAGA even though campaign finance laws prohibit such activities.

Westerfield responds that he has no control over the Washington-based super PAC. He says he doesn’t like all the money that’s being spent on the race, and that he thinks the contest should be won on experience instead of what he sees as inheritance and political patronage.

Families and Children
The candidates say there are a number of ways the attorney general can protect children and strengthen families in the commonwealth, though they suggest somewhat different approaches.

The Democrat says he will create a child abuse and exploitation division within the office with a dedicated set of prosecutors, investigators, and policy experts to handle those cases. He also calls for better regulation of the childcare industry, better training for daycare providers, and a thorough review of the state’s foster care system. Finally Beshear says the attorney general should partner with and promote organizations that offer training on parenting skills.

Westerfield touts his work on the 2014 juvenile justice reform legislation that changed how children were punished for criminal activities and so-called status offenses like skipping school or possessing alcohol. He says finding alternatives to jailing young offenders is better for the children, their families, and taxpayers. The Republican adds that a big issue lawmakers must address in the future is the disproportionate number of minority youth in the criminal justice system.

Points of Agreement
Whether it’s decriminalization of marijuana or voting issues, Beshear and Westerfield do have issues on which they share some common ground.

Both men say they oppose the legalization of recreational marijuana. Westerfield calls it a gateway drug, and Beshear says new synthetic types of marijuana are dangerously potent. As for medicinal marijuana, Westerfield says he would consider it if accredited medical research proves the health benefits, and if legislation to regulate it was narrowly crafted. Beshear says the FDA would have to approve medical marijuana before he would consider allowing it.

The Democrat and Republican say that they would vigorously protect the voting rights of individuals. Westerfield says he agrees with the 2013 Supreme Court decision that abolished parts of the Voting Rights Act that required some states to get federal approval to change ballot procedures. But he says elections still must be monitored to ensure equal voting access.

Beshear says the attorney general must help ensure that polls are open to more eligible voters not fewer, and he supports greater use of modern technology to broaden access to the polls. He also says he would be a watchdog over election fraud.

The Democrat and Republican agree that non-violent felons who have completed their sentences should have their voting rights restored. And they agree that more should be done to help reformed felons find jobs after they are released from prison. 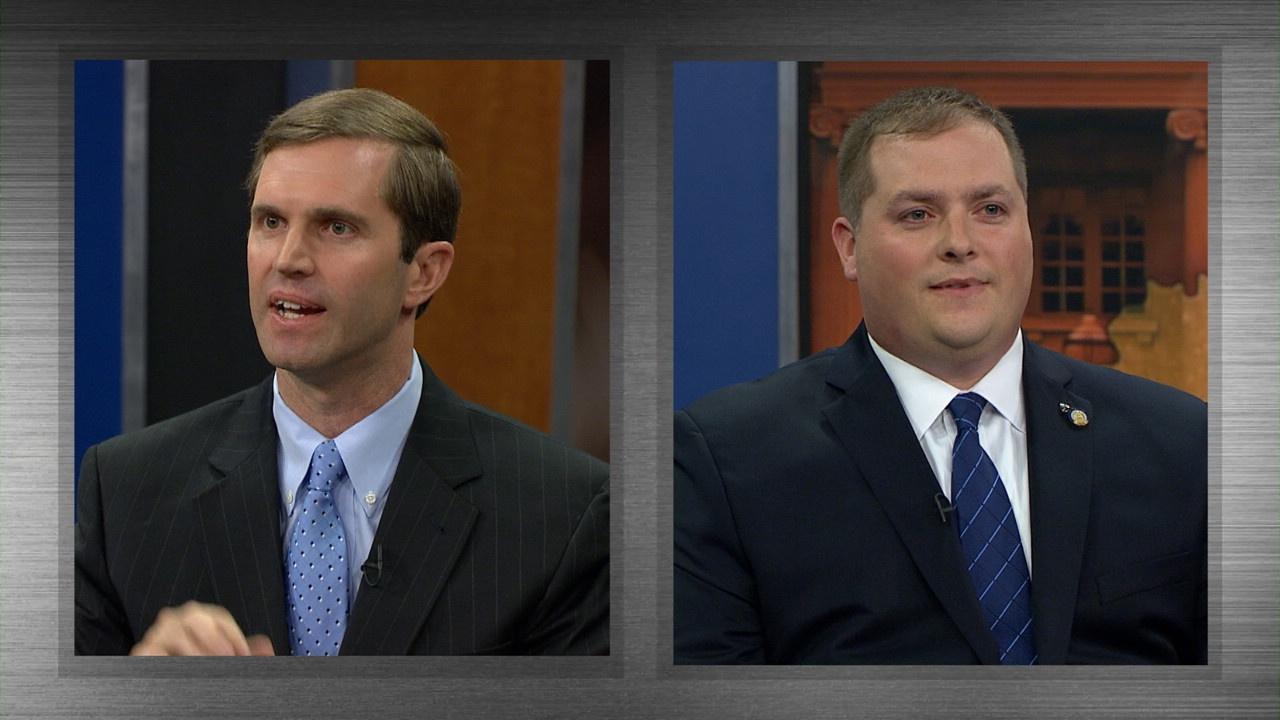