Candidates running for governor of the commonwealth appeared on Monday’s edition of Kentucky Tonight on KET. The program featured Republican Matt Bevin and Democrat Jack Conway.

Bevin is a native of New Hampshire, a U.S. Army veteran, and a Louisville businessman. He owns part or all of 10 different companies that range from investment services to medical devices. Bevin made his first run for elective office in 2014 with an unsuccessful challenge to Sen. Mitch McConnell. He won the Republican nomination for governor this year with an 83-vote victory over Agriculture Commissioner James Comer.

Conway was born and raised in Louisville and is completing his second term as Kentucky’s attorney general. After getting his law degree, Conway worked six years in senior-level cabinet positions for Gov. Paul Patton’s administration. The Democrat made unsuccessful bids for Congress in 2002 and the U.S. Senate in 2010. As attorney general, Conway has fought cyber-crimes and online child pornography, drug abuse, Medicaid fraud, and other issues.

Budget Concerns
One of the first tasks facing the new governor will be to develop a state budget for the coming biennium. In the process, he will have to balance regular funding priorities with significant additional obligations to the state pension plans and the Medicaid system. Current projections show the commonwealth will start the next budget cycle with about a $300 million surplus.

Conway says he would use any excess funds to first pay the actuarially required contributions (ARC) to Kentucky’s employee and teacher retirement systems, and then devote any remaining funds to early childhood education.

Bevin says simply paying the ARCs isn’t enough. He contends the public pension hole is growing deeper because the tepid financial markets continue to hurt returns on those investments. He says the state will never have a true budget surplus when it faces billions in unfunded pension liabilities. As a result, Bevin foresees further cuts to all state agencies and departments.

“There is going to have to be what is often referred to in the global economy as austerity measures in the state of Kentucky,” Bevin warns.

Conway says he operated the attorney general’s office more efficiently despite losing 40 percent of his budget during the recession years. He agrees that further state agency cuts may be necessary.

“Those are tough decisions that I’m willing to make,” Conway says. “I understand how to do more with less.”

Paying for Health Reforms
In 2017, the state will start paying a portion of the expenses associated with expanding Medicaid coverage. Estimates are that Kentucky will owe about $70 million in the first year. The tally could reach as high as $300 million by 2020, when the state obligation caps out at 10 percent of Medicaid costs.

Conway says he will maintain the Medicaid program as it is. He says the expansion will pay for itself through lower medical bills now that more Kentuckians are insured, and with higher tax revenues as the health of the workforce improves.

“It was right for Gov. Beshear to expand Medicaid,” Conway says of his fellow Democrat. “We’ve got people who have health insurance now that didn’t have it before, [and] it’s going to lead to healthier outcomes, hopefully.”

But with some 400,000 Kentuckians now on Medicaid, Bevin says the expense will be unmanageable. He disputes a Deloitte Consulting study that says the health reforms in Kentucky will pay for themselves over the long term. Bevin proposes creating a new Medicaid system like the one recently introduced in Indiana that requires recipients to pay small fees for coverage based on their incomes.

“I don’t care if it’s $1 or $2… people should have skin in the game,” says Bevin. “It is time to stop giving people things to the detriment of the very recipients themselves.”

As for individuals who enrolled in private insurance through the state health exchange Kynect, Bevin says he would move those people over to the federal health exchange starting with the 2016 open enrollment period. Then he would close Kynect, saying it would no longer be needed.

Conway contends that switching to an Indiana-style Medicaid arrangement wouldn’t remove the Medicaid cost-sharing obligation Kentucky faces in the coming years. He also argues that the Indiana plan is designed to deny people insurance coverage. As governor, Conway says he would monitor managed care fees associated with Medicaid services. He says he would also work to prove to Kentuckians that the health reforms are creating savings for the commonwealth.

Paying the Pension Debts
The candidates also have sharply different views of how to address unfunded liabilities in the retirement plans for state employees and public school teachers. The debt in those systems is estimated to total some $30 billion. Lawmakers have proposed creating dedicated funding streams to shore up the plans. Those ideas range from issuing state bonds to legalizing expanded gaming, with a portion of casino revenues allocated to fund the retirement systems.

Bevin says he’s against the $3.3 billion bonding plan House Democrats proposed in the last legislative session. He says that would’ve only fixed a part of the problem in one pension plan, while saddling future generations with even more debt to retire. Instead, Bevin suggests a more direct approach to creating new revenue.

“Let’s get rid of excess inventory in the state, including property that we have alongside of highways,” Bevin says. “The state would get the revenue from selling that property, the county would then get the property tax associated with that, [and] all the boats would rise on the tide.”

The Republican acknowledges that such a measure won’t completely solve the funding issue, but he says it would be a start. He also proposes that the state move new hires into a defined contribution plan, which he says will cost more in the short term, but will create significant savings in the future.

Conway counters that a 401(k)-type plan would cost an additional $8 billion over the first 15 years, and he says that the state doesn’t have enough property to sell to pay off the pension liabilities.

“We’ve got to stand by our obligations to the people who have already started working, current workers,” Conway says. “But for people we’re hiring now and into the future, we might have to tweak it going forward.”

Such a tweak might include lessening the guaranteed rate of return in the defined benefit portion of the plans, says Conway. In addition to making the full ARC payments each year, he pledges to work with the legislature to develop a dedicated revenue stream for the retirement systems. He says he’s eager to see the funding options the governor’s task force on the teacher pensions will present in early December. Conway adds that the pension crisis may finally force a public vote on the long-proposed expanded gaming idea.

Jobs and the Economy
Bevin says that addressing the state’s pension woes is also a crucial step in attracting new businesses to the commonwealth. In touting his experience at creating jobs as businessman and investor, Bevin says as governor he would also push tort reform and right to work legislation. He points to Tennessee as one of the states that has thrived under right to work.

Conway opposes right to work, saying it’s “a solution looking for a problem” that drives down worker wages. He adds that Kentucky has created more manufacturing jobs than Indiana since that state passed right to work.

To better match college graduates with available jobs, Bevin says he would incentivize state universities to push degrees in science, technology, math, and engineering. Bevin disputes the rosy economic outlook Gov. Beshear presents about the commonwealth, saying there are 71,000 fewer Kentuckians working today than eight years ago. Bevin says the state needs to be more business-friendly, and he blames part of the job losses on Conway.

“One of the reasons that many companies are concerned about coming here is because of this aggressive nature, the fact that we have an attorney general who’s shaking down a lot of companies,” Bevin alleges.

The Republican contends lawsuits like those against pharmaceutical and tobacco manufactures have cost the state job opportunities.

Conway defends his role in those actions, noting that prosecuting health care providers and drug companies that defrauded Medicaid generated $300 million in settlements. He also says the Master Settlement Agreement against the tobacco industry brought millions more dollars to the state to help farmers diversify. Conway says if Kentucky didn’t have a good economic climate, it wouldn’t have been named by Site Selection as the friendliest place in the country to do business. 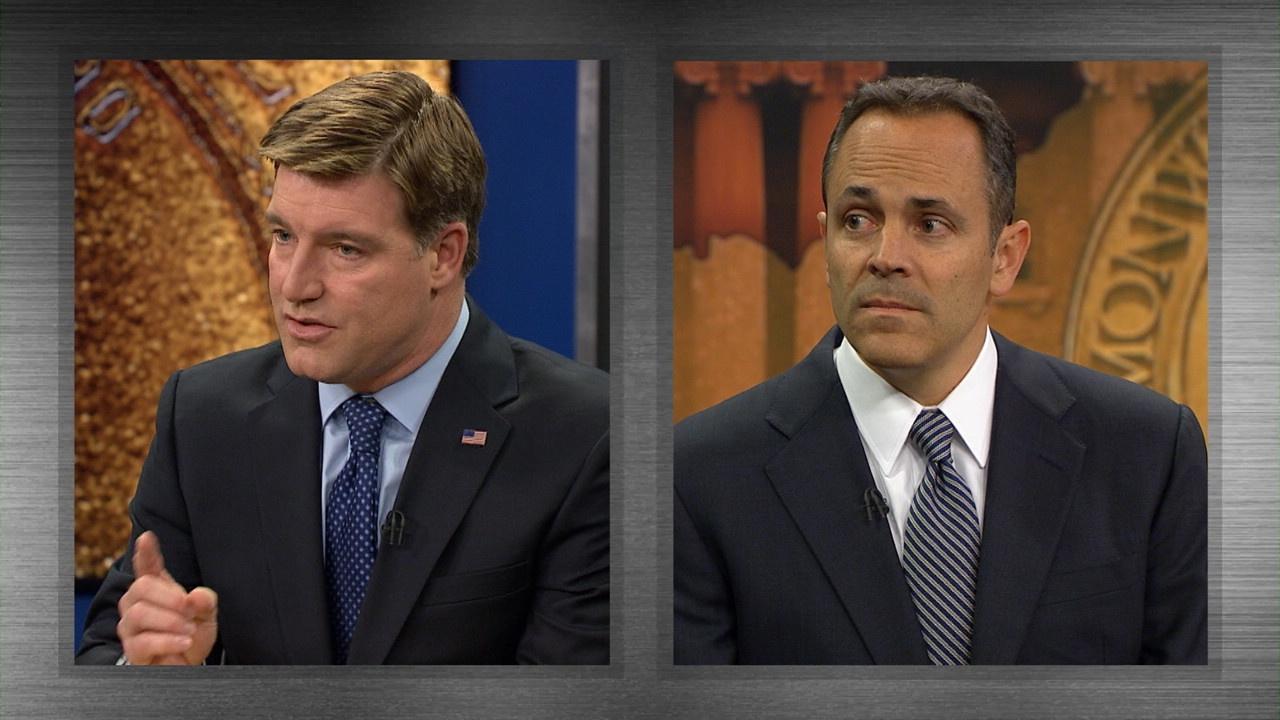