Infectious Disease Experts Discuss the Ongoing Pandemic, the Prospect of an Active Flu Season, and More

In March 2020, the realities of the COVID-19 pandemic began to sweep across the nation with the cancellation of events, the closure of schools and businesses, and dramatic scenes of intensive care units overflowing with patients. Public health officials scrambled to respond to the highly transmissible virus for which they had little information and no vaccine or treatment.

After two-and-a-half years and more than one million deaths later, life in the United States and around the world has largely returned to normal. Yet COVID remains a persistent threat. Kentucky reported more than 9,000 new cases in the past week and 65 new deaths. The statewide positivity rate is above 16 percent and 70 counties still have high levels of transmission.

“COVID is even more ubiquitous than it has been in the past… People have gotten it rampantly over the past few weeks,” says Dr. Mark Dougherty, an infectious disease specialist at Baptist Health Lexington. “The thing that we’re seeing that’s different, though, is we’re not seeing nearly the number of patients that are critically ill in the hospitals.”

While Dougherty’s Lexington hospital had more than 120 COVID patients at the peak of the Omicron surge last winter, today he says they have 25, and only one person is on a ventilator. He says most of those patients have some complicating factor such as a compromised immune system or they are elderly individuals who have not received their full complement of COVID boosters.

Even with fewer hospitalizations, readily available vaccines, and multiple treatment options, COVID remains a formidable public health threat. Dougherty says nearly 400 people continue to die from the virus or its complications each day.

Health officials say the vast majority of current cases are due to the BA.4 and BA.5 subvariants of the Omicron variant of COVID. These subvariants are especially adept at taking up residence in the body’s upper airways and replicating quickly, making it easy for the virus to spread.

“This virus jumped from one species into humans three years ago, and it’s just learning to adapt to its new host,” says Ilhem Messaoudi, PhD, chair of the Department of Microbiology, Immunology, and Molecular Genetics at the University of Kentucky College of Medicine.

An updated booster formulation holds promise for containing COVID more effectively. This bivalent vaccine contains messenger RNA components of the original virus as well as the BA.4 and BA.5 subvariants. The single-dose shot, which is now available across Kentucky, can be taken two months after a person receives the original vaccine series or after their most recent booster.

But health officials fear COVID fatigue across the nation and lingering anti-vaccination sentiment in some people may lead many Americans to neglect getting yet another shot.

Dr. Fadi Al Akhrass, medical director of infectious disease and infection prevention at Pikeville Medical Center, says it’s critical for people to get the new booster as a way to stop the spread of the virus overall and reduce negative outcomes for those who do get COVID. He says just because a person may have already had COVID earlier in the pandemic doesn’t mean their natural immunity will protect them from getting it again, especially the more virulent subvariants.

Messaoudi adds that even otherwise healthy people should receive the new booster as a way to build a “force field” of immunity around those who have compromised immune systems.

Scientists are still working to understand rebound infections and so-called long COVID. Al Akhrass says even as people recover from an initial infection, the virus can continue to replicate in a person’s upper airways, leading to a reinfection before a complete recovery. Dougherty says even people treated with the anti-viral Paxlovid can have a rebound case, as did President Joe Biden, but he says the secondary infection generally does not result in critical illness or hospitalization.

Statistics indicate that as many as 40 percent of people who get COVID will develop long-term symptoms that last more than three months after recovery.

“Some data came out this week showing that we probably have 500,000 people out of the workforce because of lingering symptoms of COVID,” says Dougherty. “That’s a huge number and that has a big impact on the individuals that it’s affecting and a big impact on our economy.”

Part of the challenge with long COVID, according to Dougherty, is that researchers haven’t developed a precise definition for the condition. People who suffer from it have a wide range of symptoms from extreme fatigue and brain fog, to persistent coughing and a loss of taste and smell. While the condition may be life altering, Dougherty says it is rarely life threatening.

If you do feel ill, taking an at-home test can help determine whether you have COVID instead of allergies or a cold. But Dougherty cautions that an initial negative antigen test at home doesn’t mean you don’t have COVID. That’s why repeated antigen testing or a PCR test from a health care provider may be necessary to get an accurate diagnosis when symptoms persist.

If you do test positive, seek treatment quickly as Paxlovid must be started within five days of developing symptoms. You may also need to isolate as directed by your doctor or CDC guidelines. Most of all, doctors encourage people to stay current on the vaccines and boosters, and be aware that you can have and spread the virus even if you don’t feel sick yourself.

“Being on the top of the virus will take some time, especially when you’re dealing with a very smart virus,” says Al Akhrass. “Nobody is safe until everybody is safe.”

Prospects for a Severe Flu Season

The coming winter months have public health officials worried that Americans could face a more intense than usual flu season. In addition to helping contain COVID, masking and social distancing policies practiced over the last two years also limited cases of influenza. With most people no longer following those recommendations, the flu could easily spread.

Australia and other southern hemisphere countries that are coming out of their winter months have experienced their worst flu seasons in several years. Dougherty says that doesn’t bode well for what will happen in the northern hemisphere in the weeks ahead.

The new flu vaccine is available in the commonwealth, and people can get their flu shot and their COVID booster at the same time, if they want. Dougherty says he usually recommends that his patients wait until late October or early November to get a flu shot so that they’ll have maximum protection through the winter months. But if cases begin to escalate before that, he says people should seek the shot earlier.

Al Akhrass adds that the simple precautions that protect people from COVID also limit the spread of influenza: get vaccinated, wash your hands frequently, and cover your mouth and nose when you cough or sneeze.

Monkeypox Spreading Across the State and Nation

Case of monkeypox continue to slowly climb in the U.S. As of last week, Kentucky had 34 confirmed cases of the disease that’s caused by the monkeypox virus, which is related to the smallpox virus.

Monkeypox results in painful skin lesions that can occur anywhere on the body. The virus is spread through contact with fluid in those blisters. Messaoudi says that can happen through intimate, skin-to-skin contact with an infected person, or by touching soiled bedding or other virus-contaminated objects. While cases have been most common among homosexual men, Messaoudi says anyone can be at risk of contracting the virus.

While monkeypox is a relatively stable virus, Al Akhrass says researchers don’t know how it might mutate next. Plus, he says the virus can have atypical manifestations.

Common symptoms are the sores as well as fever, headache and body aches, malaise, and swollen lymph nodes. But Messaoudi and Dougherty say some people may present with one or two small lesions that they mistake for something else.

“If a person has monkeypox and they have to isolate until the last scab has fallen off, that can be as long as four weeks,” says Messaoudi.

Current mortality rates for monkeypox are low thanks to readily available vaccines and treatment options. The CDC says the U.S. has seen only one death out of more than 22,000 cases so far. But Doughtery says the disease remains potentially dangerous and extremely painful.

“Just because the mortality rate is low doesn’t mean that it’s not a problem because it can be disfiguring, especially if it’s on the face,” he says. “You can have severe permanent scars, you can have visual loss.”

As if COVID, the flu, and monkeypox aren’t enough, health officials are tracking new cases of polio, a disease that had been eliminated in the U.S. since 1979.

Earlier this summer, a young adult in Rockland County, New York, contracted polio and was left paralyzed by it. Wastewater samples in that county and neighboring Orange County show the disease moving through the local population, which has low vaccination rates for polio. Despite a polio inoculation mandate in New York, some communities there have vaccination rates lower than 40 percent among children.

“People just have forgotten what vaccines have done for us,” says Messaoudi. “Nobody wants to go back to kids in iron lugs, but if we don’t keep up with our [vaccinations], we’re going to start seeing a resurgence of diseases that we thought we conquered.”

The CDC says every single known case of polio represents a public health crisis since about three-quarters of people with polio show no symptoms. That’s left officials worried that the disease could be spreading quickly in this area located about an hour north of Manhattan and adjacent to New Jersey and Connecticut. So far, no cases have been detected outside of those counties, and health officials in New York have launched a massive vaccination campaign to stem any further spread.

“This disease is very preventable and we highly encourage people to get vaccinated,” says Al Akhrass, “to be able to prevent complications and infections in the future.” 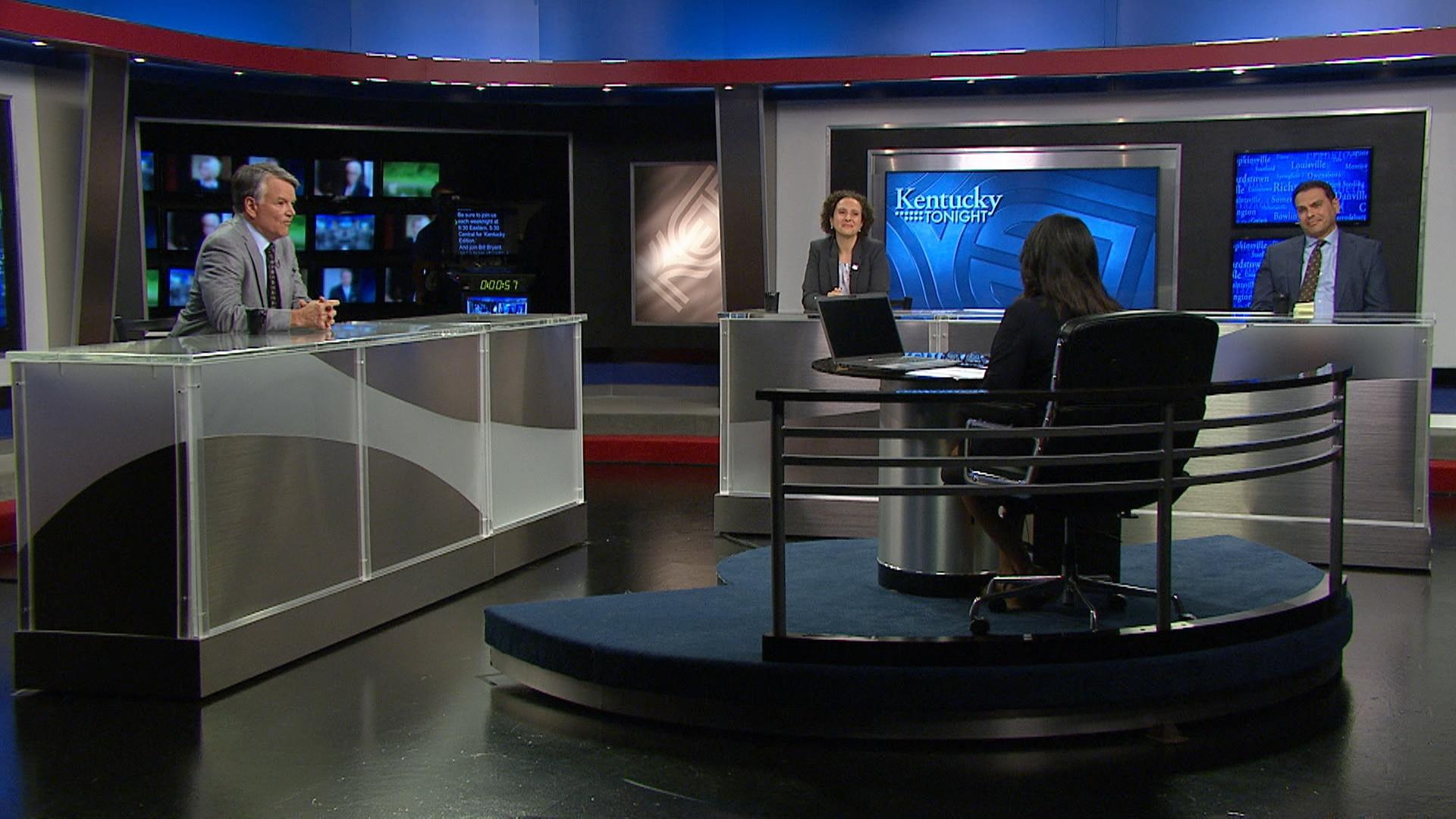